President Trump lashed out at Republicans on Friday, including Sen. Lindsey Graham, who criticized his coronavirus daily press briefings in the New York Times.

‘Because the T.V. Ratings for the White House News Conference’s are the highest, the Opposition Party (Lamestream Media), the Radical Left, Do Nothing Democrats &, of course, the few remaining RINO’S, are doing everything in their power to disparage & end them,’ Trump tweeted. ‘The People’s Voice!’

Graham and several other Congressional Republicans went on the record with The Times, advising that the president restrain himself at the briefings, which Trump has boasted are getting ‘Bachelor finale’- like ratings. 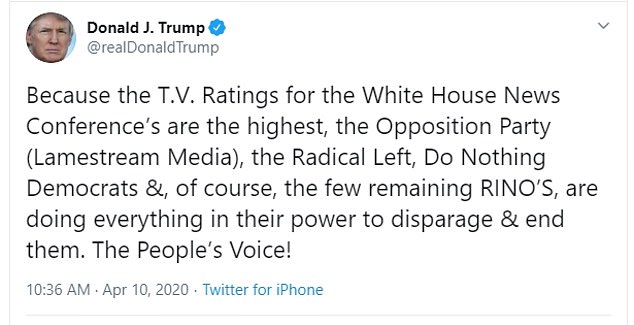 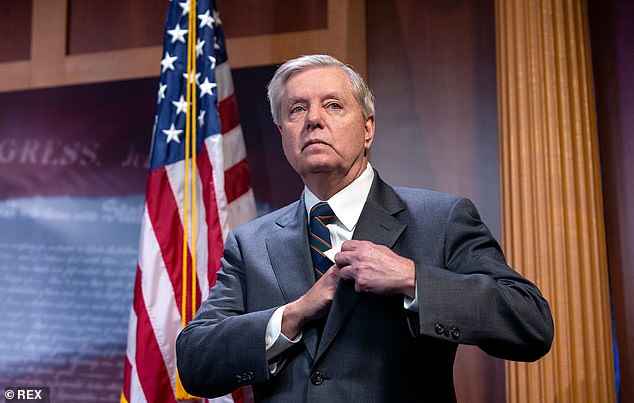 Among the Republicans taking heat from Trump was Sen. Lindsey Graham, one of his top Senate allies. Graham had said that the president should make the briefings weekly

Graham, a top Senate ally of the president’s, told the newspaper that Trump ‘sometimes drowns out his own message.’

The South Carolina Republican then offered the advice that maybe the president scale them back to a ‘once-a-week show.’

Rep. Susan Brooks, a Republican from Indiana, said the briefings are ‘going on too long.’

The president has held court with reporters for around two hours in recent days.

Sen. Shelley Moore Capito, a West Virginia Republican, said the briefings were ‘going off the rails a little bit.’

She suggested that Trump should ‘let the health professionals guide where we’re going to go.’

Trump has restructured the briefings where he now, almost fully, takes up the time at the top of the show and then hands the podium over to Vice President Mike Pence, the taskforce’s leader, who calls on the medical experts to speak.

Pence and CNN got into a stand-off earlier this week with the vice president’s office refusing to allow the medical experts to appear on the network to pressure CNN into broadcasting the full briefings.

CNN was airing reporters’ back-and-forths with Trump, but then cutting away as Pence began commanding the floor.

Before Trump was calling a trio of Republican lawmakers RINOs – an acronym of the insult ‘Republican in name only’ – he was lashing out at the Wall Street Journal’s editorial board for expressing a similar sentiment.

On Wednesday, writers at the right-leaning Journal said the president needed to hold the briefings to 45 minutes max, and let Pence handle the questions. Trump, the authors wrote, ‘can show up twice a week to reinforce the message.’

‘If Mr. Trump thinks these daily sessions will help him defeat Joe Biden, he’s wrong,’ the editorial warned. ‘This election is now about one issue: how well the public thinks the president has done in defeating this virus and restarting the economy.’

The writers also bashed the president’s ‘outbursts,’ as they put it, calling them ‘off key at this moment.’

‘This isn’t imepachment, and COVID-19 isn’t shifty Schiff,’ the editorial said, pointing to a nickname Trump uses for House Intelligence Committee Chairman Adam Schiff, the California Democrat who was one of the House’s impeachment managers.

‘It’s a once-a-century threat to American life and livelihood,’ the Journal wrote.

Trump was also not a fan of this critique.

‘The Wall Street Journal always “forgets” to mention that the ratings for the White House Press Briefings are “through the roof” (Monday Night Football, Bachelor Finale, according to @nytimes) & is only way for me to escape the Fake News & get my views across,’ the president tweeted Thursday.