By Reuters and Natalie Rahhal Us Health Editor

Coronavirus vaccines will likely start rolling out across the US the second week of December, Centers for Disease Control and Prevention (CDC) director Dr Robert Redfield predicted Tuesday.

U.S. officials also said on Tuesday they plan to release 6.4 million COVID-19 vaccine doses nationwide in an initial distribution after the first one is cleared by regulators for emergency use.

The Food and Drug Administration’s (FDA) vaccine committee will meet on December 10 to decide whether to give emergency use authorization for Pfizer’s shot, which was 95 percent effective in clinical trials.

Officials from the government’s Operation Warp Speed program told reporters that states and other jurisdictions had been informed on Friday of their estimated vaccine allocations in the first shipments so they can begin planning for how to best distribute it to their high-risk populations.

The officials had previously said they anticipate 40 million doses will be distributed by year end, a number they reiterated on Tuesday.

Health and Human Services (HHS) Secretary Alex Azar said during a Tuesday press briefing that it will be states that get ‘the final say’ on who should be vaccinated first: health care workers, seniors, other essential workers or people with underlying health conditions that put them at risk for dying of COVID-19.

‘It’s exceptional that we have these vaccines and it’s very exciting,’ said Dr Redfield.

But this, he said, is reason to keep up social distancing and mask wearing in these last few weeks before shots start to roll out across the country.

‘You don’t want to be the last group to end up getting Covid,’ he said.

‘Because they’re probably going to start being rolled out the second week of December.’

Most experts, as well as scattered members and hints from the CDC’s Advisory Committee on Immunization Practices (ACIP) suggest the shot will like likely be rolled out to health care workers first.

Dr Redfield said otherwise, although the ACIP’s recommendations will likely bear more weight in the final decision than will Dr Redfield’s opinion.

First will likely be ‘nursing home residents, and then some combination of health care providers and individuals at high risk for severe outcomes,’ he said.

He predicted the US would be able to distribute 40 million doses of early vaccine by year-end (enough to vaccinate 20 million at-risk people).

But he anticipates that volume of doses pumped out in each subsequent wave will only increase through January, February and beyond.

Although there is some concern that Pfizer’s vaccines need to be stored at ultracold temperatures (-94 degrees F), Operation Warp Speed assured reporters that that pharmaceutical giant had developed a workable solution using dry ice.

It comes as millions of Americans ignore CDC advice against traveling during Thanksgiving and fly across the nation, leading Dr Anthony Fauci to warn that 43,000 Americans could die of coronavirus by Christmas. 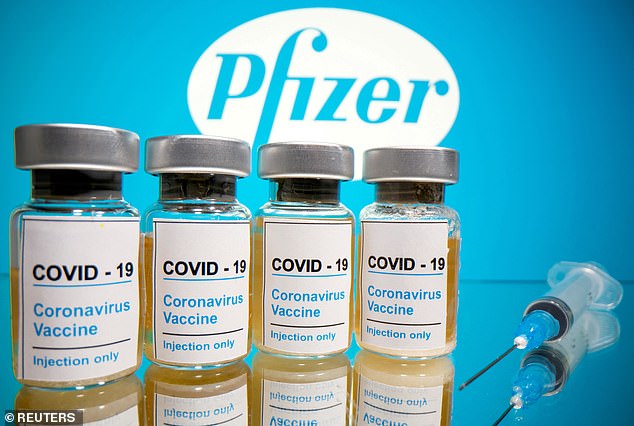 HHS officials said on Tuesday that they’re prepared to distribute 6.4 million doses of Pfizer’s coronavirus vaccine in the first wave of its rollout as soon as the shot is given its expected FDA emergency approval next month

Dr Redfield also said that these kinds of household gatherings – not schools – are fueling the latest surge in coronavirus cases during his Tuesday interview on the Daily Briefing on Fox.

Pfizer last week filed for the first U.S. emergency use authorization (EUA) of a COVID-19 vaccine after releasing its trial data.

Pfizer, which developed its vaccine with German partner BioNTech SE and others involved in shipping and handling of the vaccines have begun rehearsed dry-runs so that they can ensure the distribution infrastructure is functioning properly, the officials said.

States and U.S. territories are in charge of how the coronavirus vaccine will be distributed to their populations.

The drugmakers, in concert with federal officials, will ship their vaccines to these jurisdictions, but governors are expected to determine how best to distribute it within their states.

States have developed individual plans that prioritize who will be among the first to receive vaccine doses as they become available.

Many states have said they plan to vaccinate frontline healthcare workers and nursing home residents in their first push.