A video leaked online by the Venezuelan socialist regime shows the moment three residents were forced into community labor after they were caught in public without their face masks.

The incident reportedly took place last week in Torbes, a municipality in the western state of Táchira. A male and two females could be seen clearing out picks and shovels working on a hollow ditch filled with dry grass near a road while a police officers supervised them.

One of the women had a sign handing from her back that read: ‘I have to do community service for not using a face mask.’ 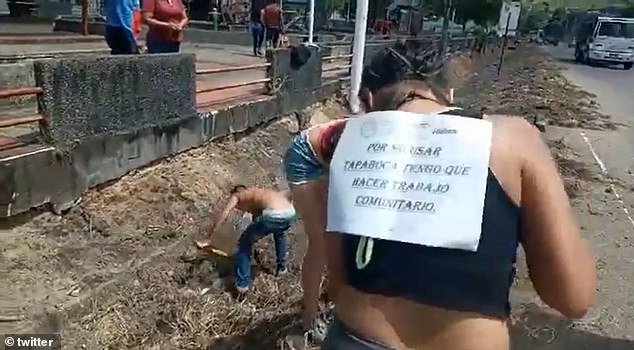 A woman wears a sign on her back that reads, ‘I have to do community service for not using a face mask,’ after she was fined for ignoring preventive measures set by the Venezuelan government to fight the spread of the COVID-19 pandemic

A separate video shared by loyalists of President Nicolás Maduro showed three young boys doing a set of pushups after they were reportedly busted for playing basketball during quarantine in Táchira.

A member of the National Guard led the boys through the exercise drill before he forced them to laud the military agency’s work in promoting social distancinig.

‘I must not be on the street. Stay at home. Stay at home,’ they were forced to say. ‘The National Guard is enforcing the presidential decree due to the COVID-19 pandemic.’ 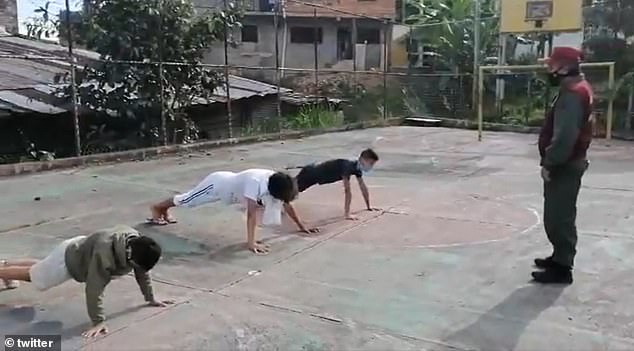 Three young boys in Táchira, Venezuela, go through a pushup drill after they were reportedly busted for playing basketball during the COVID-19 pandemic 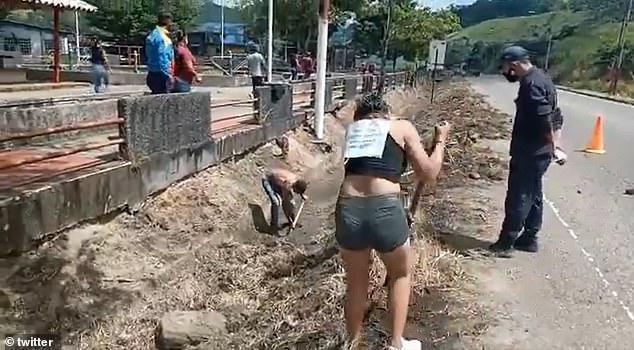 Both videos were released just a little over a week after members of a gang loyal to Maduro recorded themselves torturing two men with a baseball bat because they were not wearing face masks in Caracas, the capital.

As of Tuesday, Venezuela had reported 20,754 confirmed coronavirus cases and 180 deaths with Latin America being the worst impacted region in the world with more than 5 million positive COVID-19 cases.

The totals, however, are thought to be much higher that what has been reported by the socialist regime due to the decrepit conditions the health system currently finds itself in.