‘On the day she died, I couldn’t be with her or hold her hand’: Widower’s heart-breaking letter about staying apart from dying wife in lockdown – as MPs are flooded with emails in response to Dominic Cummings scandal

A widower has shared a heartbreaking letter to his MP describing how he stayed apart from his dying wife as Dominic Cummings remains in place despite travelling during lockdown.

John Wilson from Whitchurch revealed on Twitter that on the day his wife died he was unable to hold her hand.

It comes as Prime Minister Boris Johnson is facing backlash over his decision to stand by his top aide who travelled from London to Durham.

A widower has shared a heartbreaking letter to his MP in which he revealed he couldn’t be by his wife’s side as she died. It comes after Dominic Cummings (pictured) was found to have travelled to Durham during the lockdown 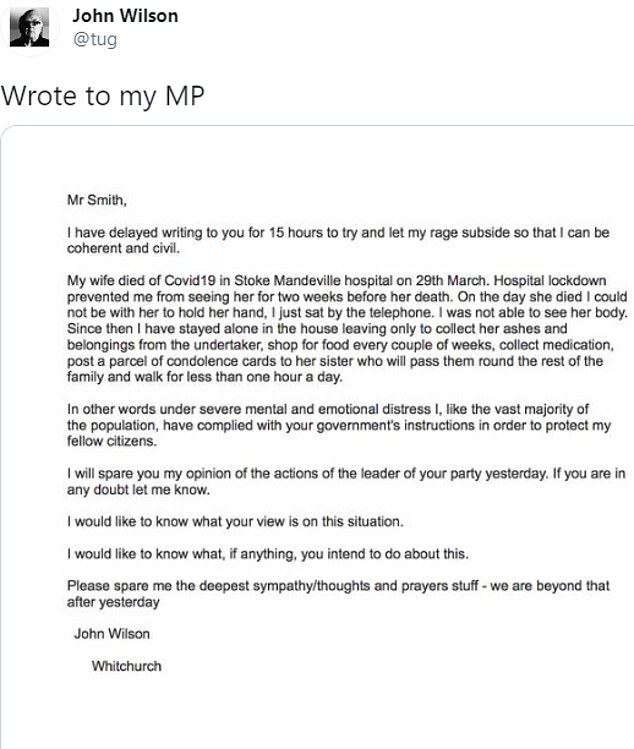 Writing to Buckingham MP Greg Smith, he said: ‘My wife died of Covid-19 in Stoke Mandeville hospital on 29th March. Hospital lockdown prevented me from seeing her for two weeks before her death.

‘On the day she died I could not be with her to hold her hand, I just sat by the telephone. I was not able to see her body.

‘Since then I have stayed alone in the house leaving only to collect her ashes and belongings from the undertaker, shop for food every couple of weeks, collect medication, post a parcel of condolence cards to her sister who will pass the round the rest of the family and walk for less than one hour a day.’

Asking for the MPs view on the situation, he ends his letter: ‘Please spare me the deepest sympathy/thoughts and prayers stuff – we are beyond that after yesterday.’

The mother of a boy who caught Covid-19 and died during lockdown has also rejected Cummings’ excuses.

Louise Bennett told Mirror Online that it was ‘offensive to every family’ that Boris Johnson defended his top aide.

Her 14-year-old son, Fred, contracted coronavirus and was receiving treatment for leukaemia when he died in hospital.

Ms Bennett, from Rugby, Warwickshire, said lockdown had forced families to make huge sacrifices. Her son died on May 3. 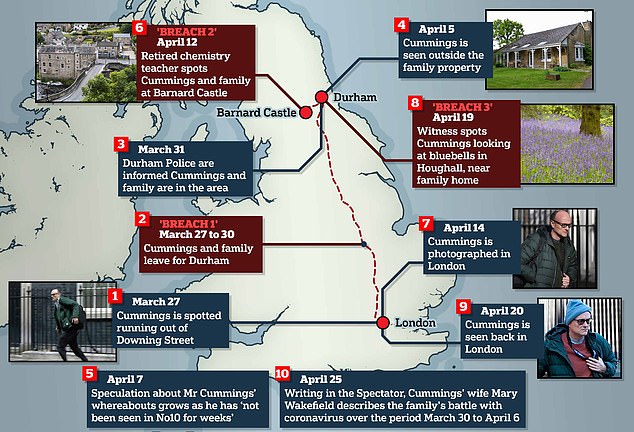 The PM decided to throw a protective arm around Mr Cummings after crisis talks with his mercurial adviser in Number 10.