A Las Vegas mother has been arrested on suspicion of murder after police found the body of her missing three-year-old daughter stuffed inside a duffel bag and stashed in a closet.

Dejah Hunt died of blunt force injuries before her body was found August 23, the Clark County coroner’s office said. Her death was ruled a homicide.

Her mother, Aisha Yvonne Thomas, 29, told detectives that she panicked, wrapped Dejah’s body in trash bags and a duffel after the girl became unconscious hours earlier. 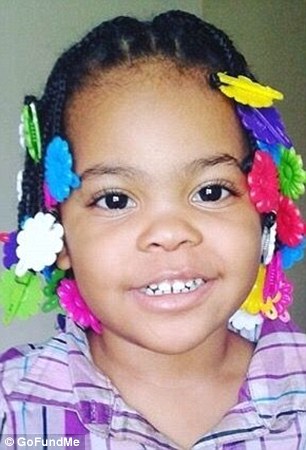 Aisha Yvonne Thomas (left), 29, is accused of beating her three-year-old daughter, Dejah Hunt (right), to death and then hiding her body inside a duffel bag in her Las Vegas apartment Police discovered the child’s lifeless body inside Thomas’ home on the night of August 23 (pictured, 19 hours after her violent death

Thomas said she had struck her daughter in the head for wetting her pants at 2am, according to a police arrest report.

Dejah fell to the floor and would not stop crying. Thomas said she gave her daughter some water and left the apartment to go to a grocery store for about 10 minutes.

When she returned, Thomas found Dejah wrapped in a blanket and not breathing in the master bedroom. She then allegedly wrapped her child’s lifeless body in multiple white trash bags for the smell, stuffed it into the duffel bag and placed it in the bedroom closet.

Thomas was arrested after calling 911 and reporting that her daughter wandered away while walking to a grocery store with Thomas and her other three children. 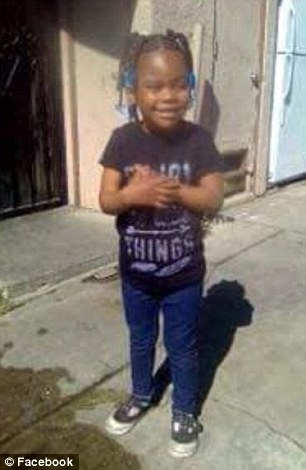 Killed over bathroom accident: Thomas told police she hit Dejah in the head for wetting her pants. She then left the apartment and returned 10 minutes later to find the child dead

Officers began searching the area and found the body at 10pm – 19 hours after Dejah’s beating death – in Thomas’ apartment after noticing a ‘wet and moldy smell’ wafting from the closet.

Dejah’s father, Don Edward Hunt Jr, 30, was in jail at the time.

He had been arrested August 19 by Las Vegas police investigating a domestic violence complaint at the apartment.

Thomas remains jailed without bail pending an October 1 hearing to determine if she’ll stand trial on a murder charge. 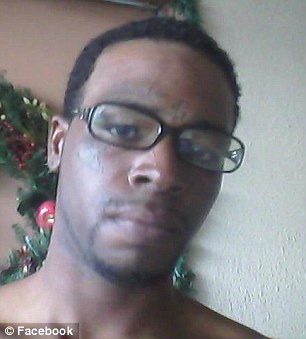 Dejah’s father, Don Hunt (pictured), was in jail at the time of his daughter’s death on a domestic violence charge

Her court-appointed attorney, Sarah Hawkins, has said Thomas will plead not guilty.

Thomas’ three other children, all under the age of three, have been turned over to child welfare officials, police said.

Dejah’s paternal grandmother, Teena Stansberry, has launched a GoFundMe page to raise money for the toddler’s funeral. As of Friday afternoon, nearly $2,000 has been donated.

‘There’s no more calling me Nana, there’s no more of any of that from her,’ Stansberry told KTNV of Dejah. ‘And for me, this is a nightmare that I just want to wake up from.’