A dead man’s body lay on the streets of Rio for 30 hours amid Brazil’s  soaring coronavirus death toll that has reached more than 20,000.

The family of Valnir da Silva, 62, say he was a victim of the coronavirus pandemic that is tearing its way through Rio’s marginalised communities, stretching public services beyond their limits.

His body was discovered sandwiched between a row of parked cars and a small football pitch, as locals continued to play the game next to his corpse.

The country has become South America’s epicentre of the killer bug as it hurtles towards its peak, at the same time as the government loosens rules allowing for the increased use of a controversial and unproven malaria drug to treat patients.

The body of Valnir Mendes da Silva, 62, lies on a sidewalk marked with traffic cones in the Arara slum where he died after experiencing breathing difficulties, while a football game plays on to his right 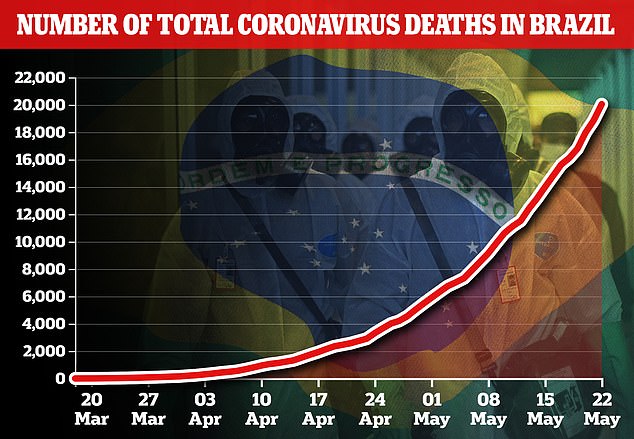 The country’s death toll of 20,047 is the fifth-highest in the world

This week Brazil surpassed the UK to become the country with the third-highest number of confirmed cases at nearly 310,000, behind only Russia and the US.

Brazil’s first coronavirus death was recorded on March 18 and has since then unleashed a relentless and widespread cull across the country. As of Friday the death toll stood at 20,047.

Locals at a nearby bar say they called an ambulance after da Silva began to experience breathing difficulties, but his health deteriorated so rapidly that he was dead by the time paramedics arrived.

Ambulance workers left his body on the streets, and a statement later issued from the city staff said it was not their responsibility to remove corpses. 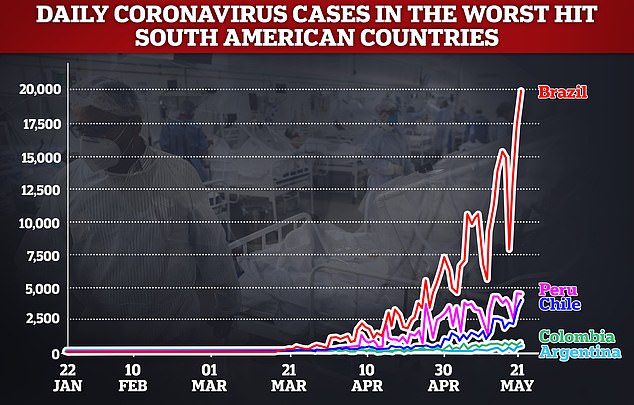 South America is rapidly becoming the new epicentre of the coronavirus pandemic after seeing case numbers soar, with Brazil reporting an average of 10,000 cases per day this month (pictured, a graph showing the daily infection totals of some of the hardest-hit countries) 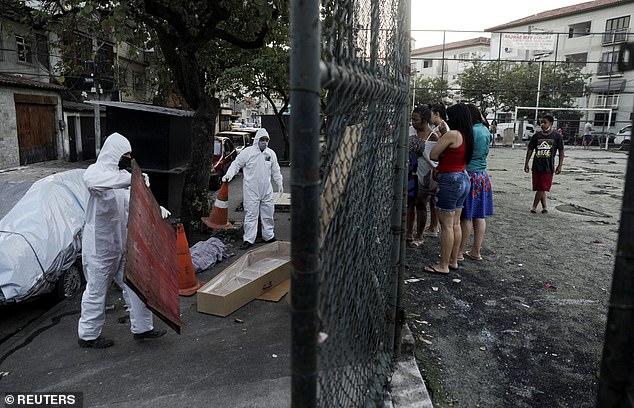 Funeral parlour workers prepare a coffin for the da Silva’s body, which residents say was left on the streets for 30 hours 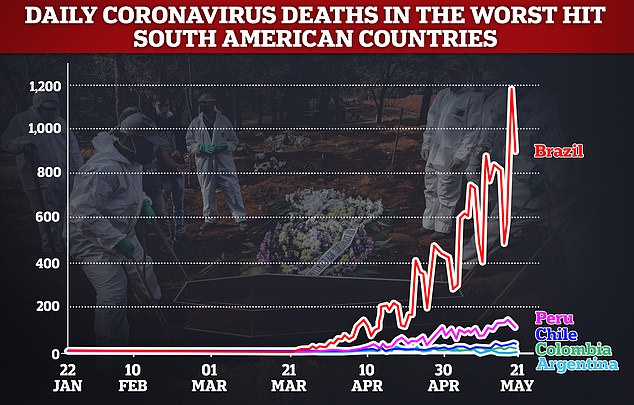 While South America’s death totals still lag behind the rest of the world, they are rapidly catching up as cases increase, as Brazil again leads the pack (pictured, a graph comparing daily death totals)

A civil police spokeswoman said the department was only responsibility for removing cases in criminal cases.

It took 30 hours before a funeral team was finally arranged to remove da Silva’s body which left his family ‘very sad about what happened’.

A group of locals said da Silva’s final few months were beset with tragedy after the death of his wife caused him to spiral and he ended up living on the streets.

He was later buried at a ceremony with just four people, including Marcos and his mother, in attendance.

Da Silva’s death certificate reads that he died of cardiac arrest, though his family claim this was a complication of coronavirus.

His death comes just days after President Jair Bolsonaro doubled down on chloroquine as a possible remedy for the killer bug. 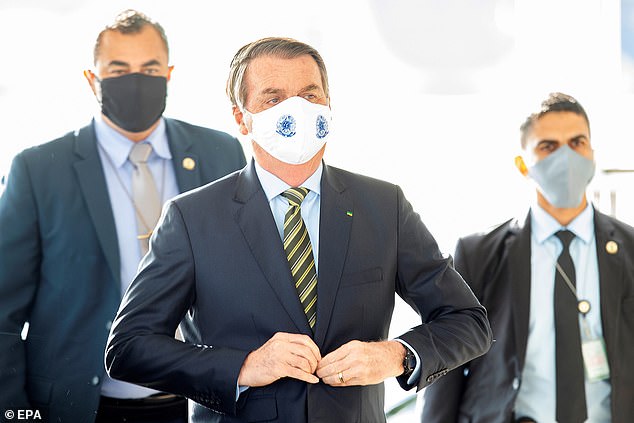 The malaria drug was already being used in Brazil for Covid-19 patients in a serious condition in hospital.

The new regulations mean it can be given to people with lesser symptoms such as abdominal pain, cough or fever, according to the Health Ministry.

‘There is still no scientific evidence, but it is being monitored and used in Brazil and worldwide,’ Mr Bolsonaro, who has likened the virus to a ‘little flu’ and feuded with local governments over their stay-at-home measures, said via his official Facebook page.

Brazil’s new guidelines were approved by interim Health Minister, General Eduardo Pazuello, who had no health experience prior to becoming the ministry’s No. 2 official in April.

The previous health minister, Nelson Teich, resigned last week after less than a month on the job, reportedly after clashing with Bolsonaro over the president’s insistence on widespread chloroquine and hydroxychloroquine use.

Health systems in various Brazilian states have gone over capacity, with overwhelmed intensive care units unable to take in new Covid-19 patients, and reports of rising numbers of people dying at home.

Cemeteries are using backhoes to dig hundreds of graves at a time, and Manaus in the heart of the Amazon rainforest is burying the dead in mass graves.