The time when the first stars in the universe began to form ended 200 million years later than previously thought, astronomers have claimed.

This so-called ‘cosmic dawn’ began around 250 to 350 million years after the Big Bang, with stars and galaxies being created and ionising the intergalactic hydrogen gas in a process called reionisation.

It ended, with all of the hydrogen ionised, 1.1 billion years after the Big Bang, according to researchers at the Max Planck Institute for Astronomy in Germany.

That is 200 million years later than previous estimates and means that the first generation of stars and galaxies may be closer and therefore easier to observe than first thought.

It is hoped that these first stars will be sufficiently luminous to be seen with the newly-launched $10 billion (£7.4 billion) James Webb Space Telescope, which has been described as a ‘cosmic time machine’ because of its ability to peer back further into the history of the universe than any telescope before it.

The time when the first stars in the universe began to form ended 200 million years later than previously thought, astronomers have claimed. This so-called ‘cosmic dawn’ began around 250 to 350 million years after the Big Bang, with stars and galaxies being created and ionising the intergalactic hydrogen gas in a process called reionisation (depicted in the graphic above)

WHAT WAS THE COSMIC DAWN?

The ‘cosmic dawn’ was the moment after the Big Bang when the first reactions happened in massive stars.

It is the moment when the darkness of the cosmic ‘dark ages’ turned light.

Those first stars were massive, explosive and relatively short lived.

It would have been like a ‘cosmic fireworks show’ with stars burning and exploding one after another.

No telescope is currently able to view this cosmic fireworks show, but it is hoped the recently-launched James Webb space telescope could do.

Astronomers have pinpointed this period of starlight to within 250 and 350 million years after the big bang.

The stars would mainly be burning atomic hydrogen, the first elements present within the early, dark universe.

Atomic hydrogen is hydrogen that has not been split into protons and electrons.

Prior to this cosmic dawn, and starting about 380,000 years after the Big Bang, there was a period of roughly 100 million years when the early universe was completely dark, known as the cosmic ‘dark ages’.

Then a process called reionisation took place and led to a ‘cosmic fireworks show’ with stars burning and exploding one after another.

No telescope is currently able to view this, but it is hoped James Webb will change this.

Today, all the hydrogen spread out between galaxies, the ‘intergalactic gas’, is fully ionised. However, when that happened is a heavily discussed topic among scientists and a highly competitive field of research.

The new timeline for the end of the cosmic dawn was calculated by Sarah Bosman at the Max Planck Institute for Astronomy in Germany.

‘I am fascinated by the idea of the different phases which the universe went through leading to the formation of the sun and Earth,’ she said.

‘It is a great privilege to contribute a new small piece to our knowledge of cosmic history.’

Bosman and her team used the light from 67 quasars that were observed using the Very Large Telescope in Chile and the W. M. Keck Observatory in Hawaii.

All of these quasars – which are extremely bright objects powered by supermassive black holes – were far enough away that they must have formed within around 1 billion years of the Big Bang.

Looking at a quasar spectrum, which visualises its intensity laid out across the observed wavelengths, astronomers find patterns where light seems to be missing.

That is what scientists call absorption lines.

Neutral hydrogen gas absorbs this portion of light along its journey from the source to the telescope.

Taking into account the universe’s constant expansion, the researchers analysed these dark absorption lines to determine when the light stopped travelling through neutral hydrogen and started encountering only ionised hydrogen in the space between galaxies instead. 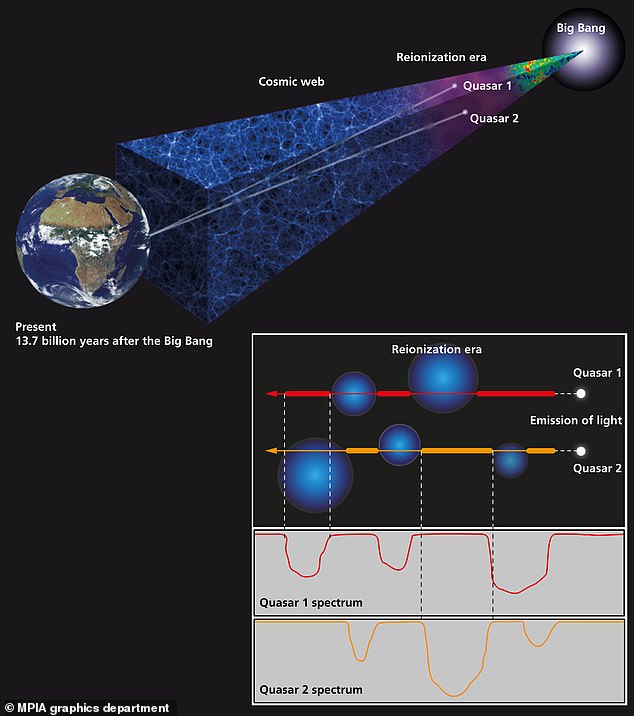 Experts used the light from 67 quasars far enough away that they must have formed within around 1 billion years of the Big Bang. Based on this light, they were able to calculate that the cosmic dawn ended 1.1 billion years after the Big Bang, 200 years later than previous estimates 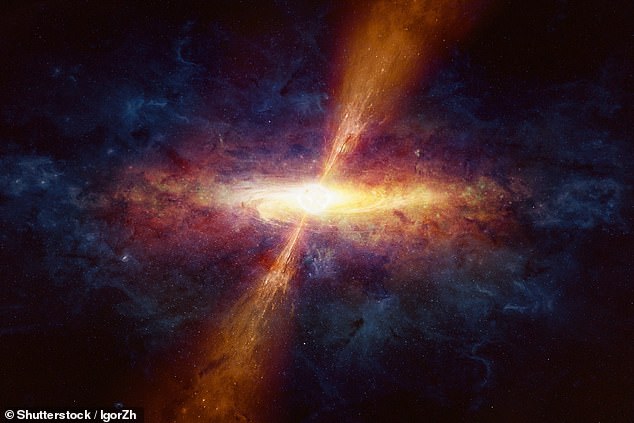 Bosman said researchers ‘can tell it’s the end of reionisation when all the quasars agree – it’s ionised everywhere.’

The date they found was 1.1 billion years after the Big Bang.

Frederick Davies, also an MPIA astronomer and co-author of the paper, said: ‘Until a few years ago, the prevailing wisdom was that reionisation completed almost 200 million years earlier.

‘Here we now have the strongest evidence yet that the process ended much later, during a cosmic epoch more readily observable by current generation observational facilities.’

Bosman told the New Scientist: ‘The history of the universe has gone through many phases between the Big Bang and now, and now we’re really starting to trace all these phases.

‘The next step is to go to earlier times and link the reionisation information to the galaxies that are causing it, so we can really see the galaxies destroy the gas.’

The new research has been published in the Monthly Notices of the Royal Astronomical Society.

WHAT IS THE BIG BANG THEORY?

It says that the universe was in a very hot and dense state before it started to expand 13.7 billion years ago.