Couples will now need to find an extra £2,200 a year to keep up a comfortable retirement lifestyle after the pandemic, after the pension industry’s guidelines for spending expectations were revised in the wake of Covid.

It means couples will need another £54,400 and total pension savings of nearly a quarter of a million pounds to enjoy a retirement of £8 bottles of wine, two annual holidays to Europe, and a restaurant budget of £500 a month.

The research also revealed how spending priorities had changed, with retirees now wanting to splash more cash on dining out and haircuts, and insisting on a subscription to Netflix.

It comes as Britain faces a cost of living crisis while energy bills soar ahead of winter. The Bank of England expects inflation to soar above 4 per cent by the end of the year and supermarkets have warned of 5 per cent price rises.

The Pension and Lifetime Savings Association’s ‘retirement living standards’ published today are designed to give savers a picture of how much money they will need each year to keep enjoying their spending habits and favourite brands. 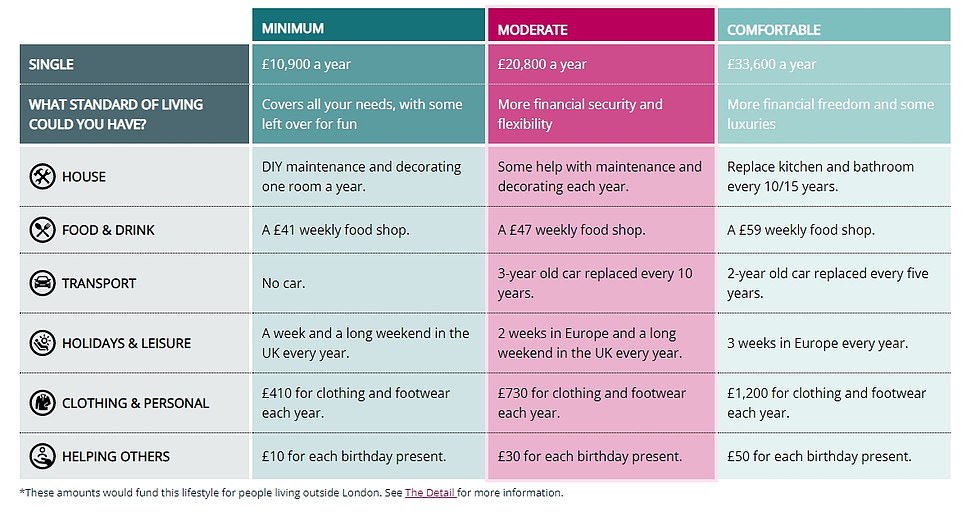 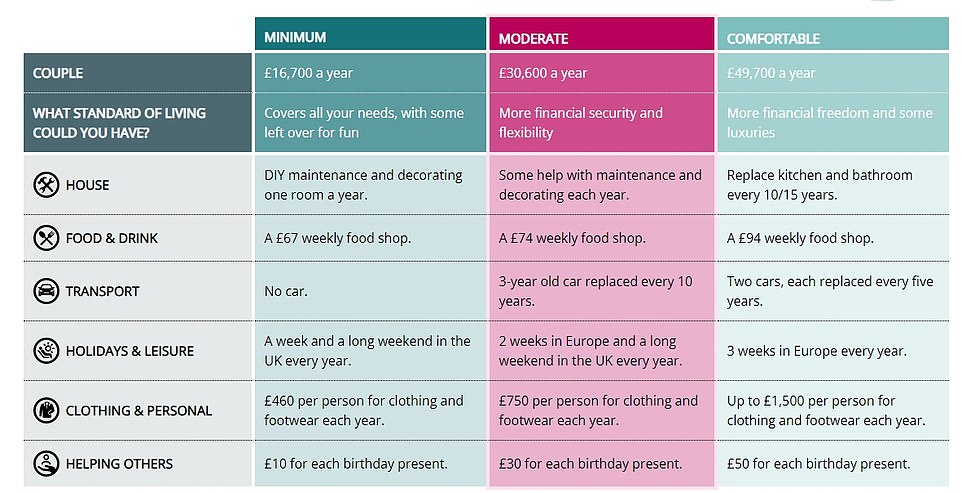 The study, developed and maintained independently by the Centre for Research in Social Policy at Loughborough University, details everything from the brand of beer they might like to buy, to their summer holiday destination.

What goods, services and activities are included to provide the standards of living in retirement?

Researchers held 13 discussion groups with people from across the UK, including both retirees and over-55s approaching retirement.

The minimum retirement living standard covers a typical retiree’s basic needs plus enough for some fun.

It includes a week’s holiday in the UK, eating out about once a month and some affordable leisure activities about twice a week.

It does not include a budget to run a car.

Through a combination of the full state pension of £9,339 per year, and auto-enrolment in a workplace pension, this level should be very achievable for most people, the PLSA said.

The minimum basket includes an increase in the budget for hairdressing, from £15 to £25 for women and from £8 to £10 for men, as well as the inclusion of Netflix.

For example, someone could have a two-week holiday in Europe and eat out a few times a month.

The budget for social activities was increased from £35 to £50 per week, with Netflix also added alongside price inflation across leisure services and leisure goods.

The PLSA said around half of single employees are on track to expect a lifestyle between minimum and moderate – and couples who are able to share costs will be higher in this range.

At the comfortable retirement living standard, retirees can expect to enjoy some luxuries such as regular beauty treatments and theatre trips.

About one in six single employees are projected to have an income between moderate and comfortable.

The cost of annual maintenance and servicing of a burglar alarm was included in the comfortable standard for the first time.

Pensioners and savers told researchers the pandemic had made them rethink retirement.

One man from Wales said he had not realised how important dining out was for ’emotional wellbeing’.

Another said his partner’s quality of life would not be the same without Netflix, adding: ‘These things were a luxury, but they become a necessity in certain circumstances.’ 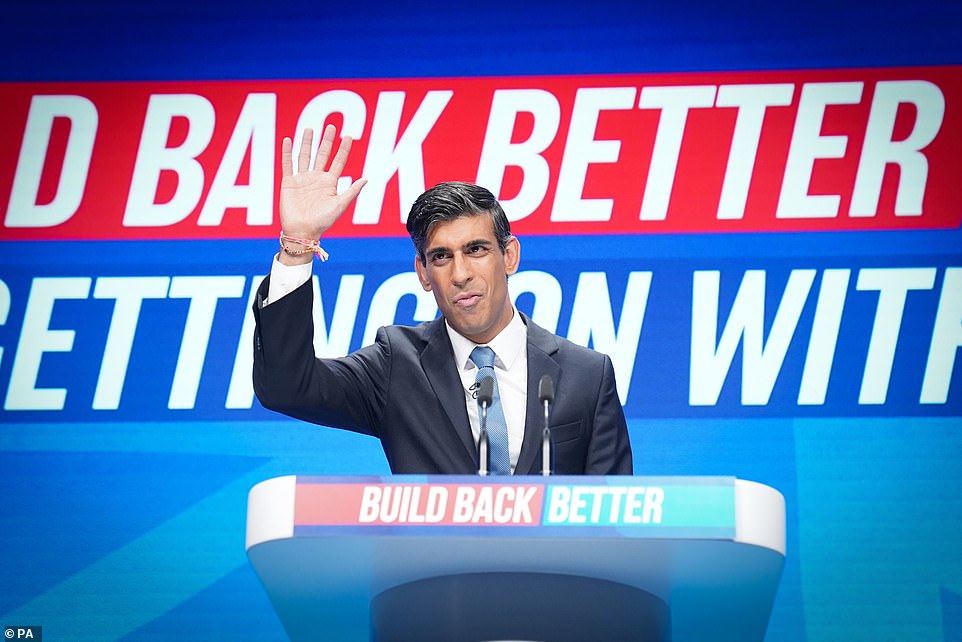 Of the coronavirus lockdowns, the report said: ‘This period of enforced abstinence serves to underline just how important it is to be able to participate in the world around, not through extravagant choices but in more every day and routine ways – seeing family and friends, going out for something to eat, taking an annual holiday, planning and looking forward to future social events.’

Health and care levy may rise as family bills soar

A new health and social care levy could almost be trebled, just as families face a huge squeeze on their finances, a major report has warned.

Households may have to fork out another £19billion in the coming years to meet the needs of caring for an ageing population, experts predicted.

The grim forecast means Britain’s tax burden, which will already be at a historic high, could balloon even further. The Government’s new levy, introduced earlier this year, will add a 1.25 percentage point surcharge to national insurance contributions from next April.

But the Institute for Fiscal Studies (IFS) said that to meet the sector’s needs, the tax rise could hit 3.15 percentage points by the end of the decade.

For someone earning £30,000 a year, who will already have to pay an extra £255 on their national insurance bill from next year, their extra payments would hit £643 per year by the end of the decade.

But while the cost of living is rising, the report authors said the financial strain of the pandemic could mean many now cut down on pension saving.

They wrote: ‘The reduced ability to save for the future is a real concern, particularly in light of existing fears that people are simply not saving enough for the kind of lifestyle they imagine for themselves in retirement.’

Nigel Peaple, director of policy and advocacy at the PLSA, said: ‘It is important that the retirement living standards remain relevant by reflecting real-world price changes and real-world expectations about lifestyles in retirement.

‘We hope the updated standards will encourage people to think about whether they are saving enough for the retirement lifestyle they want and, in particular, whether they are making the most of the employer contributions on offer in their workplace pension.

‘The lockdowns caused by the pandemic have given many workers a foretaste of being retired and made people think about the activities and experiences they truly value.

‘The pandemic has emphasised the importance of economic security as well as social and cultural participation in retirement.

‘With barbers and hairdressers closed during lockdowns and many of us taking scissors to our own hair for the first time, it is little surprise that the research groups agreed the budget for personal grooming should be increased across the three standards.

‘The addition of Netflix also gives an insight into what many of us expect to be doing when we finish work.’

Tom Selby, head of retirement policy at investment broker AJ Bell, added: ‘If having a moderate or comfortable standard of living in retirement is a key goal, you might need to think about saving a bit more in your pension if you can afford to.’

How much would you need to save for a comfortable retirement?

What about savings and investments

Not all of the money needed would have to come from their pensions, it could also come from savings or investments.

Interest rates are at rock bottom – the top easy access deal pays 0.6 per cent and even the best five year fixed rate savings deals only pay 2 per cent – and getting an income from cash savings is difficult right now.

However, a stock market income fund or investment trust would generate between a 3 and 4 per cent annual return from dividends, so £3,000 to £4,000 on £100,000 of savings, and over the long-term investors can expect  some share price growth from investments in addition to this too.

The PLSA figures provide guidance on how much income individuals or couples would need each year to sustain different levels of lifestyle, writes Simon Lambert, and from this it is possible to work roughly how big a pension pot would be needed to provide it.

The first thing to take into account is the state pension. Those on the new full flat rate state pension currently get £179.60 a week, or around £9,300 a year.

For an individual this would leave a £24,300 annual gap that needs to be filled from a work or private pension or other source to get a comfortable retirement, which the PLSA estimates to cost £33,600 per year.

Couples benefit from shared costs and their comfortable retirement would need a combined annual income of £49,700.

Combining both their state pensions would deliver £18,600 of income a year, leaving a gap of £31,100 that needs to be filled between the two of them.

Those who have generous work final salary defined benefit pensions, where employers agreed to pay them a set percentage of their earnings for every year worked, have the best chance of filling the gap.

An individual with such a pension would need it to provide the £24,300 needed to bridge the gap between the state pension and a comfortable retirement, while a couple would need a total of £31,100 between them, or £15,050 each.

Almost all private sector final salary and other definined benefit schemes are now closed to new members and public sector schemes require members to pay in more than previously.

Past decades have seen a shift to defined contribution schemes instead – and there has been a massive uplift in those saving into such employment pensions from auto-enrolment.

With a defined contribution pension scheme, workers pay in a percentage of their salary and their employers pay some in too. This is invested into stock market and other investment funds in order to grow over the long term and deliver a retirement pension pot.

When they retire workers must use that pension pot to provide them with an income, either by keeping it invested and drawing on it, or by buying an annuity, which provides a set income for the rest of their life.

Analysts suggest that on average a safe level of income to draw from a retirement pot to avoid it running out is about 4 per cent each year, although some are more cautious and suggest a lower figure closer to 3 per cent.

With a 4 per cent withdrawal rate a couple would need a combined pension pot of £777,500 to get a comfortable retirement, or £388,750 each if it came equally from both partners.

How much should you save for your pension?

Pension experts typically say that rather than contributing 8 per cent of earnings under auto enrolment, people should be putting away at least 12 per cent.

One influential report said the UK should set a national target of every worker saving 15 per cent of their salary, including employer contributions and tax relief.

The good news is that pension tax relief, which gives a 25 per cent uplift to make up for basic rate tax for every £1 paid in and more for higher earners, and employer contributions go some way to meeting this figure.

So for example, for someone with a generous employer who will match their contributions up to a relatively high level, this would mean paying in just under 6.7 per cent of their salary, with their employer contributing the same and basic rate tax relief adding a further 1.675 per cent, to deliver a total of 15.075 per cent.

There are also some general rules of thumb for working out what percentage of your salary needs to be going into a pension, in terms of your and your employer’s contributions.