Business leaders last night urged the next prime minister to press ahead with HS2 despite a reported surge in costs.

Bosses of the high-speed railway project have warned the final bill may reach £85billion – almost £30billion more than expected.

Despite this, the CBI has called for whoever is next in No10 to throw their weight behind the project.

The group’s director general Carolyn Fairburn said: ‘Our new prime minister has a real chance to inject a new lease of life into the UK economy and show the world we are open for investment. That means no equivocation on essential national infrastructure, from HS2 to Heathrow, an immigration system that is controlled but also open and welcoming, and fixing policy that isn’t working, from business rates to the apprenticeship levy.’

According to The Financial Times, the chairman of HS2 has written to the Department for Transport to warn that the project may bust its original £55.7billion budget.

Allan Cook, who is reviewing the scheme amid cost concerns, is said to have put the final figure at between £70billion and £85billion. Factors include poor ground conditions and the extra costs of a scheme designed to run faster than other comparable rail projects.

Boris Johnson has already said he will review the project if he becomes the UK’s next prime minister.

He has warned it would cause ‘a great deal of difficulties’ for his constituents in Uxbridge and South Ruislip in west London. 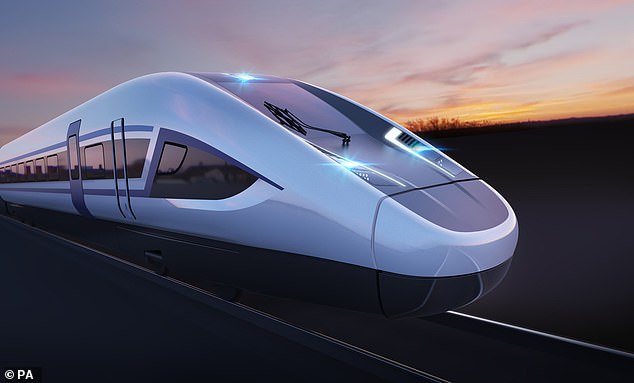 Allan Cook, who is reviewing the scheme amid cost concerns, is said to have put the final figure at between £70billion and £85billion (file image)

A spokesman for HS2 Ltd said: ‘We don’t comment on leaks or speculation. We have previously noted that our chair, as you would expect, continues to scrutinise the programme, and regularly reports back to the Department.’

A spokesman for the Department for Transport said: ‘The chairman of HS2 Ltd is conducting detailed work into the costs and schedule of the project to ensure it delivers benefits to passengers, the economy and represents value for money for the taxpayer.’