Pub landlord Archie Orr-Ewing, pictured, saved the life of one of his customers after she began choking on a piece of steak at the Swan Inn in Swinbrook, Oxfordshire

The landlord of one of Britain’s best pubs saved the life of one of his customers after performing CPR when she stopped breathing.

Archie Orr-Ewing, heir apparent to the Baronet of Hendon, was sat in his Cotswolds pub garden at lunchtime when an elderly customer began choking on a piece of steak.

The 49-year-old aristocrat realised the customer’s heart had stopped when she turned blue and performed CPR on her until she started breathing again.

He said: ‘I’d never seen a person like that before. I picked her up and I felt like I had her life in my hands.

‘I tried with all my might to pick her up and do lunges underneath her to get the piece of food out. I thought we were losing her.’

Penny Snaith and her husband had been dining at the Swan Inn in Swinbrook, Oxfordshire, with a small group of friends, all in their seventies, when she began choking.

Sir Archie performed several upwards chest compressions on the pensioner in a bid to dislodge the errant beef from Mrs Snaith’s airwaves, but by the time he had moved the meat, she had gone into cardiac arrest.

He added: ‘I thought we had lost her. I thought she was dead. But we must have managed to remove the blockage. 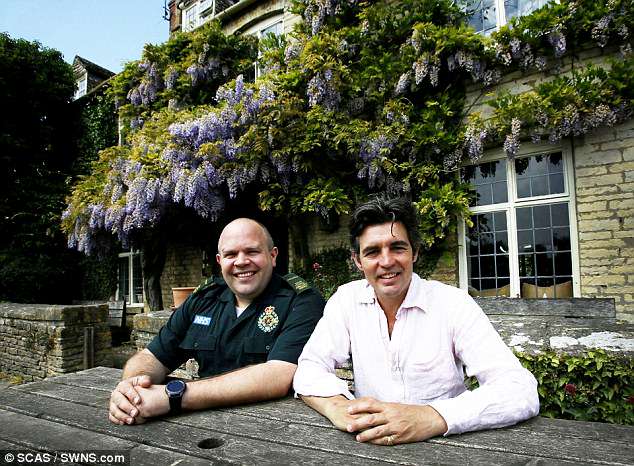 Mr Orr-Ewing, pictured here with Ryan Scott from the South Central Ambulance Service, has received a letter of commendation from the service honouring him for his performance

‘We got a flick of life in her and kept her going for another five or six minutes until the emergency services arrived and took her to hospital.’

The legendary landlord praised his entire team who were involved in the rescue.

Had he not taken the first aid course, Mr Orr-Ewing said he did ‘not think Penny would have made it’, and highlighted the importance of people knowing how to administer first aid.

He said: ‘This indicates the fine line between life and death and first aid training can make that difference.

‘There’s not a lot you can do unless you know what to do. When somebody is unconscious like that, they are a dead weight. it’s much more gruelling than you think.

‘First aid training can give you a bit of knowledge and a bit of confidence in a situation like that until help arrives.’ 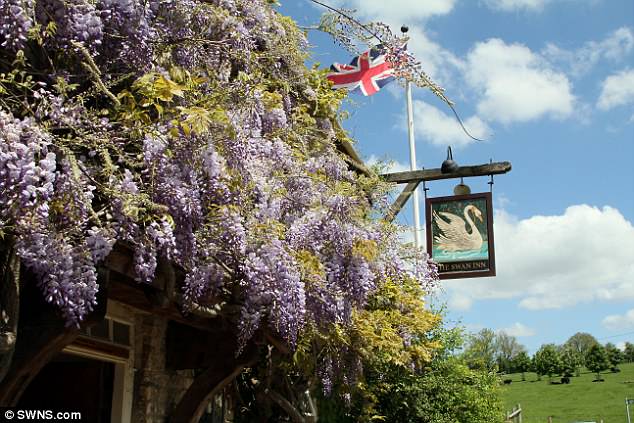 He saved the life of Penny Snaith at the pub (pictured) which he has been running with his wife Nicola for the past 11 years. Mr Orr-Ewing has said he does ‘not think Penny would have made it’ had it not been for the first aid training he took

Mrs Snaith’s husband rang the pub the next day to thank the man who saved his wife’s life, and Mr Orr-Ewing later received Mrs Snaith’s letter which gave a huge thank you.

It read: ‘Our paths would never have crossed had you not saved my life at the Swan.’

He also received a letter of commendation from Mark Ainsworth, director of operations at South Central Ambulance Service NHS Foundation Trust, honouring him for his performance.

As well as running the Swan Inn with wife Nicola for 11 years, the pair also own The King’s Head in nearby Bledington, named Pub of the Year by The Good Pub Guide last year.

Mr Orr-Ewing is first in line to the 2nd Baronet of Hendon, Sir Alistair Simon Orr-Ewing, and part of the Orr-Ewing Baronetcy.

He shares his name with the former Scottish MP and 1st Baronet Archibald Orr-Ewing for whom the Ballikinrain Baronetcy was created in 1886.