Could 2021 be the best year to bag a bargain UK city break?

Holidays. I spend plenty of time thinking, plotting and reminiscing about them.

While my small family hasn’t felt sure enough to take the plunge for an overseas jaunt yet when rules allow, we have booked five UK trips in the days after Prime Minister Boris Johnson outlined plans to end the full lockdown.

Essentially, self-contained holiday lets have been good to go since 12 April, and all other accommodation from 17 May.

Last weekend, we stayed in a delightful cottage in Camber, five minutes from the beach and a five minute drive to the history and quaint town of Rye. It was pure bliss getting away from what has essentially been my home-slash-office for the last 12 months for three nights.

Capital fantastic: My young daughter is currently obsessed by transport and I have planned a whole day around buses, tubes, cable car, train and boat – and bagged a great hotel deal

While that wasn’t what I would label a bargain, two of the city breaks we have on the cards definitely are – London and Cambridge. In fact, the deals were so reasonable we booked quickly in case it was a website error.

Either side of that, we’re staying on Osea Island on a converted American school bus next month and then a week-long stint in North Norfolk in July.

These trips aren’t me boasting, but rather hammering home the point that there is so much adventure to be had in beautiful Britain, and perhaps a pause in the diet of cheap package holidays will be good for the UK economy.

Holidaying at home as a family has plenty of pros – namely, you can throw everything into the car without worrying about cramming it into a suitcase.

My two-and-a-half year old daughter has been asking to go to London for some time, after we had a great day trip their last summer as ‘tourists.’

My wife and I have worked there for most of our lives, and also lived there for a fair chunk too, but just enjoying it at a relaxing pace is an entirely different experience.

Meanwhile, Cambridge is a gorgeous city we’ve visited twice before, but we’re heading back thanks to an incredibly low rate as I’ll explain shortly.

This week, Consumer Trends asks: Could this be the best year to get a luxury UK city break in the bag? 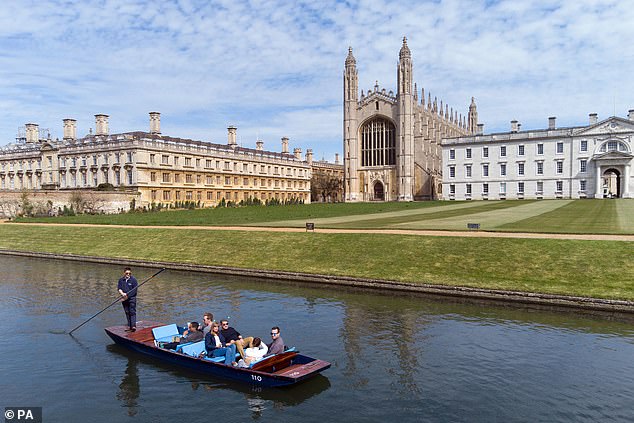 Good punt: Cities like Cambridge have some bargain hotel prices at the moment – all you have to do is hunt them down

Shortly after the lockdown ‘roadmap’ was announced, we decided to hunt down a hotel in London on a Friday in late May, once the restrictions for hotel accommodation lifted.

Some of the prices were incredibly low compared to what you would expect. In the end, we booked a four star Kensington hotel for £110.

‘There has never been a better time to visit and explore one of the greatest cities on earth,’ so says the website for Hotel Week London.

Between 28 May and 6 June 2021, it is offering discounted rates with the aim ‘of enticing Londoners and British travellers to explore London once again,’ suggesting luxury hotels maybe struggling to attract custom.

Most of the offers actually run until the end of June – and it could be worth getting a gauge of prices on there, before booking directly.

But not just any room – an executive suite, roughly 500sqm, a blessing when you’ve got a young child who will crash by 7.30pm and the parents still want to enjoy the evening.

However, shortly after we booked, we were emailed by the hotel directly and asked if we wanted to upgrade to its presidential suite, double the size, for an extra £50.

Almost a metric dönüm of space in one of the notoriously most expensive cities in the world for that price was too good to turn down.

Not only do we get the room, but complimentary alcohol between 6.30pm and 8pm, and breakfast.

It’s not just London. Earlier in the week, a hotel deal hit us through a targeted Instagram advert for Cambridge.

My wife, who used to work in the hotel business, says Cambridge is nearly as expensive on the whole for good hotels as London, thanks to the university and international visitors, alongside strong business links and Stansted near-by.

For a Friday night, we snagged a deluxe family room at a four-star hotel for £109, again with breakfast. We booked both of these directly after researching ratings and reviews on popular booking websites.

It is likely that a drop in international visitors and UK ‘staycationers’ wanting to go to Cornwall, the Lake District or the coast has helped us bag cheap city rates. 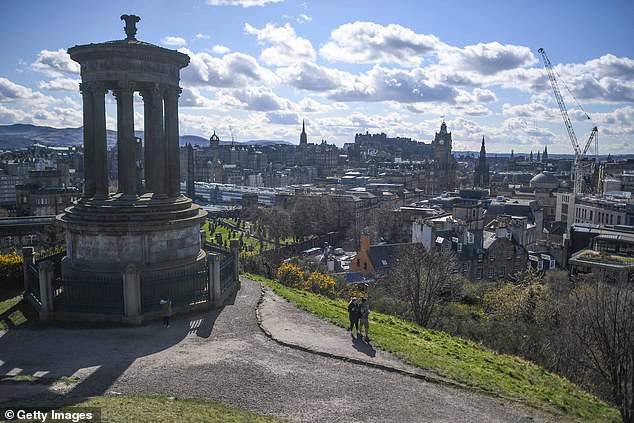 Mega cheap: Edinburgh is a beautiful city and has hotel prices on the cheap for the coming months

City prices up to 27% cheaper in May and June

According to exclusive statistics for the Consumer Trends column, Kayak says prices for city hotels have tumbled for next month and June. For example, in Edinburgh for next month, prices are typically 27 per cent lower.

Robin Chiang, general manager for Kayak EMEA, said: ‘When looking at travel from mid-May onwards this year, our latest data shows that average hotel prices across major UK cities such as London, Edinburgh, and Glasgow are approximately 15 per cent lower when compared to 2019.’

It, along with a number of other booking websites and hotels directly, is offering flexible rates with free changes and cancellations.

Meanwhile, research from Booking.com shows coastal breaks are likely to be the most sought after domestic option this summer.

In fact, more than one in five say a relaxing beach or spa trip will be the first type of trip they take when it’s safe to do so, whilst just 5 per cent say a city break is a priority.

‘We know from our research this will especially apply to places such as Newquay and St Ives,’ says Ryan Pearson, regional manager at Booking.com.

He adds: ‘Some Britons are still looking to their favourite cities and our data shows that some of the most-searched for city break destinations for summer include Bath, York and Brighton.

‘After a challenging period for the travel industry, there’s no denying that people are eager to get out and explore again.’

More than a quarter of Britons have already booked a staycation, and a further 53 per cent are planning on booking one, spending an average of £353 per person, equating to a £9.8billion injection across the UK as a whole, according to data from American Express.

The top four locations for planned staycations according to the credit card firm are Wales, Lake District, Cornwall and the Scottish Highlands. Not a city in sight.

Haggling for a bargain

I think city breaks are great, whether that is UK or abroad. My wife and I like to try and bag a bargain, and often research on the popular booking websites, then approach the hotel directly for upgrades or price reductions.

It doesn’t always work, but is worth a shot. If you do go down this route, make sure you have read the terms and conditions about cancellation properly.

We also keep dates flexible, aiming for a handful to find the cheapest rate as possible that works for us – although, that is a difficult trick to repeat if you have children in or school or work commitments that don’t allow.

Additionally, if it allows, we often book extremely last minute – sometimes even on the day. Find the price on a booking website, then call the hotel directly and ask what its cheapest price is.

Don’t feel like you’re taking advantage doing this – think about it more in the way that you’ll be filling an otherwise empty room.

On 6 May 2021, my soon-to-be-released book Never Go Broke reveals another top travel tip: paying for your flights by taking an empty suitcase away with you (when overseas travel is back on the cards).

How? Well I can’t give that way, but it’s far easier than you think. Wherever you end up going on a break in the coming months if you do, have fun, create memories and support as many local businesses as you can.