Could a £1 ‘virtual reality’ gadget be they key to restoring a dementia patient’s joy of life?

Smiling, giggling, singing and joyously telling stories are not things typically expected of people with dementia. Nor might you expect them to be using high-tech gadgets.

But, all over the country, patients are reliving their youth at a street party in 1953 celebrating the Queen’s Coronation by looking through a special box that transports them there in 360-degree virtual reality.

It’s all there in perfect detail: the fashion, decor, food and songs. It’s the ultimate reminiscence therapy — a research-proven way to reach out to people lost in the fog of dementia.

The gadget incorporates a phone app, a cardboard box and a mobile phone and costs around £1 (FILE photo)

The principle is that recalling old memories can tap into their undamaged longer-term memory and prompt conversations that help them connect with others.

This is said to help alleviate the anxiety that often haunts dementia patients. Reducing agitation can lower their need for sedatives that can cause trips and falls.

Virtual reality takes the reminiscence therapy approach a step further because the experience is so immersive, transporting the user to a specific scenario — they can look up and down, from side to side, taking in all the action that is apparently happening around them.

The vivid sensory experience is thought to reap more benefits for patients.

Virtual reality uses computers to create a three-dimensional environment that mimics real life. This is relayed through projectors for patients to see.

This device, called The Wayback, creates a virtual reality inside a box. First, a film is downloaded from the free Wayback application on to a smartphone, which displays it on screen in several different images.

The phone is inserted at one end of a cardboard box (which can be bought for £1 on the internet).

Patients then peer into the box from one side and enter the virtual reality. Headphones provide the soundtrack. The Wayback’s first in what will become a series of virtual reality films is the Coronation. The film was made last year by a small army of volunteers, from low-tech sewing circles to the visual-effects wizards at MPC, a company that worked on Harry Potter and The Jungle Book.

Co-creator Dan Cole, 43, an advertising copywriter from Hertford, says: ‘Nearly all the volunteers had a personal link to dementia.’ He was inspired to start the project by his father, Terry, who died three years ago, aged 77. 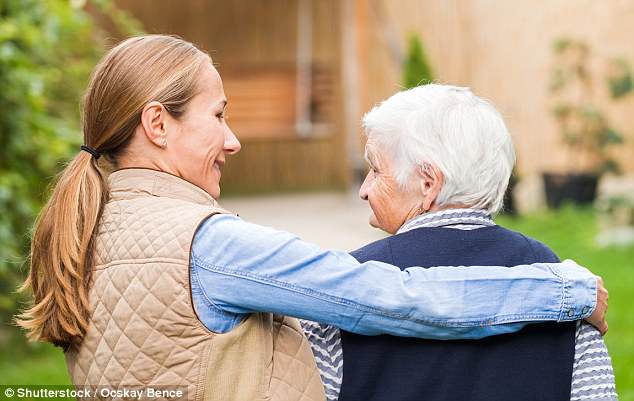 ‘When Dad started developing dementia, conversations became hard,’ says Dan. ‘One day, I took him for a drive in Camden, where he grew up, and his memories flooded back about streets, pubs and markets. Suddenly, the conversation flowed again.’

There are no clinical studies of virtual reality reminiscence therapy yet, but last month, the highly respected research body Cochrane published an analysis of the effects of low-tech reminiscence approaches with photos and music, using data of more than 1,900 dementia patients. It concluded that it has positive effects on quality of life, cognition, communication and mood, though work is needed to establish the best ways to deliver the therapy.

Dr David Sheard, of Dementia Care Matters, an organisation that runs courses on how to treat dementia patients in compassionate ways, welcomes the approach.

‘Our studies show using reminiscence therapy can significantly cut patients’ distress, and, in turn, their need for medication and even their risk of falls,’ he says.

‘People with dementia are living more in their long-term memory than their short-term memory and the film reaches them in the reality they are in. It helps them have crystal-clear moments, rather than feeling confused by events around them.’

‘It’s simple to use and can be brought out at any time,’ adds Charlie Hoare, the managing director of Langham Court, a specialist care home in Surrey that started using The Wayback six months ago.

‘Residents become completely immersed — smiling, humming along to songs and commenting on details such as the fish- paste sandwiches.’

Now, Dan wants to repeat the Coronation party film’s success with one that focuses on 1966, the year England’s footballers won the World Cup.

‘People have told us that some of their dementia patients are a bit young to remember the Coronation,’ he explains. ‘The film features a hair salon, shop, home and holiday from 1966 and there’s pop music from the time.’

The team are trying to raise £60,000 by May 2 in order to complete the film in time for the World Cup this summer.