Could a ‘syringe watch’ end the hassle of carrying EpiPens?

Could a ‘syringe watch’ end the hassle of carrying EpiPens? Wearable device can be unfolded to administer life-saving shots in emergencies

Allergy sufferers could one day buy a watch with an in-built syringe that can be unfolded to administer an epinephrine shot in an emergency.

The 3D device, EpiWear, was built by Rice University students in a bid to get around the downsides of EpiPens, which can have lethal consequences.

Bioengineering junior Justin Tang, who has severe peanut allergies and came up with the watch idea, says he loathes bringing the bulky device along with him to everything.

If he leaves it somewhere, or can’t find it in his bag, he could die.

What’s more, a small part of the controversially high price of EpiPens has to do with the packaging, which he believes could be altered to shave off costs.

The 3D device, EpiWear, can be unfolded and administered in times of emergency 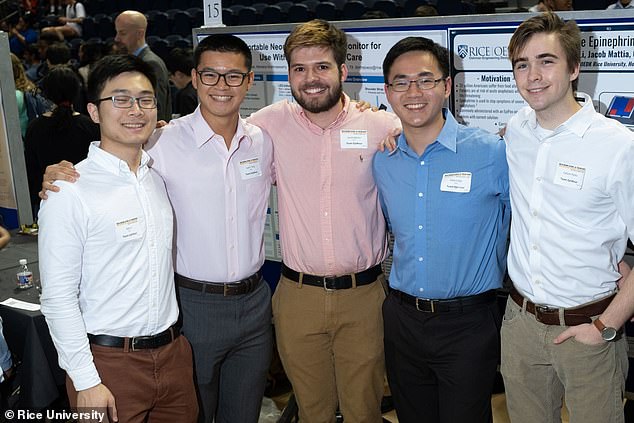 The inventors: The team of juniors and one freshman at Rice University were inspired to make the pen because one of them, Justin Tang (second left), has a severe peanut allergy

‘I’m very self-aware and worried about my life, but it was always difficult for me to bring something as bulky and obtrusive as this when going to dinner with friends or just going out at night,’ Tang said in a press release.

To prevent accidentally activating the syringe, they broke it down into three bits which fold together, with a safety lever that has to be flicked up to reach the all-important button.

They also cut down on how much epinephrine was in each syringe, to save on bulk.

Most EpiPens only administer 0.3ml at a time, but carry much more.

Jacob Mattia, Tang’s colleague and another bioengineering major, said: ‘We designed the optimal device to house the minimal amount of epinephrine necessary for injection.’

There are still improvements to be made. 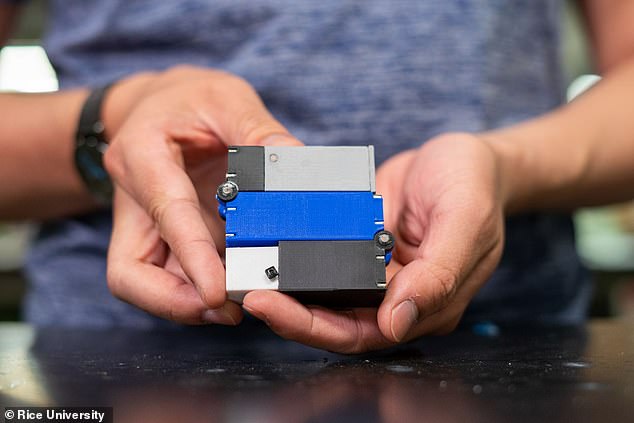 To prevent accidentally activating the syringe, they broke it down into three bits which fold together, with a safety lever that has to be flicked up to reach the all-important button

They want to more tightly secure the activating button.

And, engineering aside, they plan to work on the look, to incentivize as many people with allergies to wear one as possible.

‘If it’s something that’s going to save your life, we think that would be enough to persuade people to maintain it on their bodies,’ Alex Li, another bioengineering junior in the team, said.