Could CBD help in fight against cancer?

The unidentified woman, in her 80s, took cannabidiol (CBD) oil two to three times a day after being diagnosed with lung cancer three years ago.

But despite continuing to smoke and declining standard NHS treatment – which can include surgery, chemotherapy and radiotherapy – her tumour shrunk to a quarter of its original size.

Doctors who treated the patient at Mid and South Essex NHS Foundation Trust said her case justifies thorough research into whether cannabinoids – chemicals derived from cannabis – work as a cancer treatment.

But writing in the BMJ Case Reports, they admitted it is not clear the CBD oil caused her cancer to improve.

And experts said the case is not robust enough evidence that cannabis products can alter the progression of cancers.

The graph shows the diameter of the tumour in millimetres from June 2018 to February 2021, which shrunk from 41mm to 10mm after she self-medicated with CBD oil purchased abroad 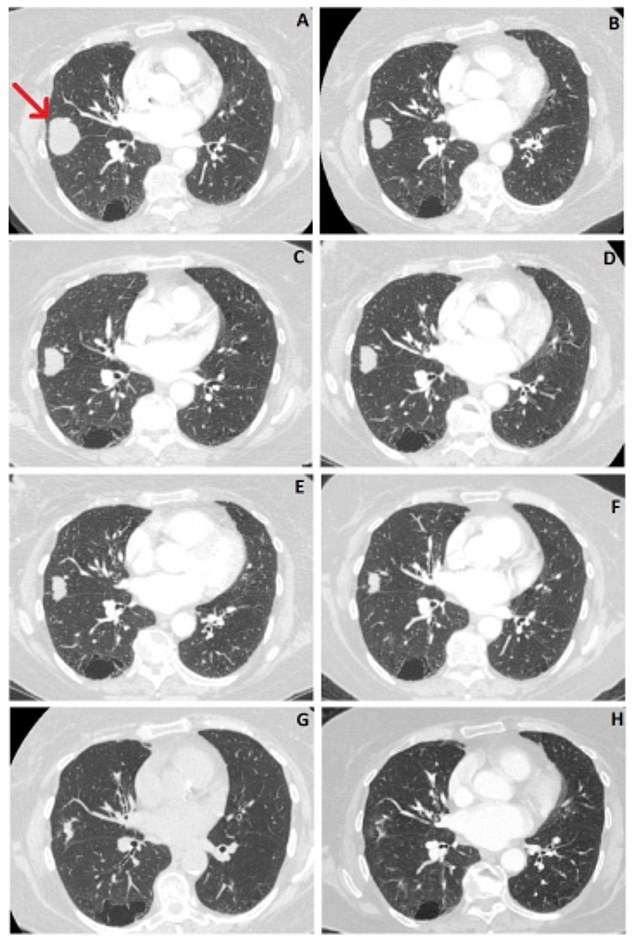 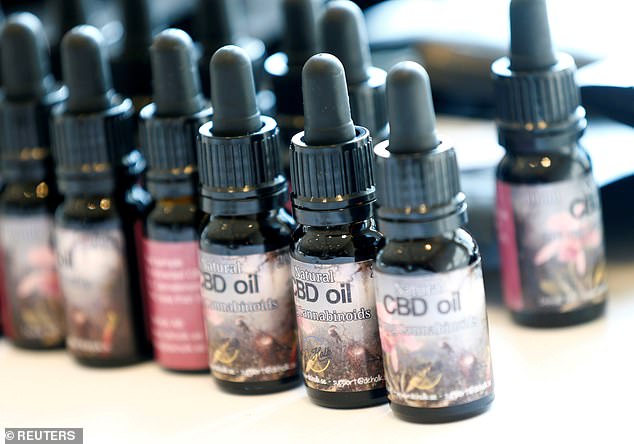 The patient took 0.5ml of CBD oil – that she had purchased outside of the UK – two to three times a day since August 2018 on the advice of a relative. Pictured: shop-bought cannabidiol (CBD) oil

There are hundreds of cannabinoids, but tetrahydrocannabinol (THC) – the chemical that gets you high – and CBD – which is non-psychoactive – are the two which have been most researched.

Both of the chemicals interact with the body’s endocannabinoid system, which helps regulate nerve function, emotion, energy metabolism, pain and inflammation, sleep and immune function.

Chemically similar to these molecules, experts claim cannabinoids can interact with signalling pathways in cells — including cancer cells.

But studies examining whether they can be used alone as a cancer treatment have not established a robust link.

Lung cancer is the second most common cancer in the UK and just 15 per cent of people live for five years after they are diagnosed.

The woman, who smoked more than a pack of cigarettes a week, went to her GP in February 2018 after suffering a cough for a few months.

She was initially given antibiotics after a chest X-ray didn’t pick up any problems.

But she was diagnosed with cancer that June after her cough persisted and a follow-up scan showed a lesion on her right lung.

Because there were no signs that it had spread, she qualified for standard surgery to remove the cancer, as well as chemotherapy and radiotherapy.

But she refused the treatment, after watching her husband struggle with the side gruelling effects of radiotherapy.

What is CBD oil?

Cannabidiol (CBD) is a chemical found in cannabis that has medical benefits.

It can be prescribed by the NHS for a small list of conditions, including severe epilepsy, vomiting caused by chemotherapy and multiple sclerosis.

The NHS version cannot get you high, because it doesn’t contain tetrahydrocannabinol (THC) – the chemical in cannabis that has that effect.

But the health service warns that most of the cannabis-based products that can be bought online will be illegal and may contain THC.

And health shops selling CBD products only contain very small amounts of the chemical, so it is unclear what effect it has.

The risks of using cannabis products containing THC include psychosis and drug dependency.

Its side effects include reduced appetite, diarrhoea and feeling sick.

So she was placed on a ‘watch and wait’ list, which involved getting a CT scan every three to six months.

But instead of getting worse, her tumour progressively shrunk by an average of 2.4 per cent every month.

When she was diagnosed, her tumour was 41mm in diameter in but by February this year it was 10mm.

She revealed she had been taking 0.5ml of CBD oil – that she had purchased outside of the UK – two to three times a day since August 2018 on the advice of a relative.

The packaging stated that the oil shouldn’t be taken with hot food or drinks because it could cause the user to ‘feel stoned’.

The women said the only side effect experienced from taking the oil was a reduced appetite.

Doctors warned only one other similar case has been reported — and it is not clear which ingredient in the CBD oil may have helped the tumour.

They wrote: ‘Although there appears to be a relationship between the intake of CBD oil and the observed tumour regression, we are unable to conclusively confirm that the tumour regression is due to the patient taking CBD oil.’

The team confirmed to MailOnline that the patient is still getting regular follow-up scans and her tumour is stable.

Professor Edzard Ernst, emeritus professor of complementary medicine at the University of Exeter, said: ‘Cannabinoids have been shown to reduce the size of prostate cancer tumours in animal models.

‘However, case reports cannot be considered to be reliable evidence, and there are currently no data from rigorous clinical trials to suggest that cannabis products will alter the natural history of any cancer.’

Dr Tom Freeman, senior lecturer and director of the addiction and mental health group at the University of Bath, said: ‘These results are exciting and very encouraging for this patient.

‘However as a single case study the quality of scientific evidence is low and should not be used to change clinical practice.

‘People with lung cancer should always seek guidance from a healthcare professional when deciding on an appropriate treatment.

‘The product used by this patient reportedly contained high levels of THC (the intoxicating component of cannabis), and was sourced from outside the UK.

‘This type of product is very different to most CBD oils which predominantly contain CBD.

‘Unlike prescribed medicines, CBD wellness products lack assurance of quality, safety or efficacy and should not be used for medicinal purposes.’