Russian ships are skulking around underwater communications cables, causing the U.S. and its allies to worry the Kremlin might be taking information warfare to new depths.

Is Moscow interested in cutting or tapping the cables? Does it want the West to worry it might? Is there a more innocent explanation? Unsurprisingly, Russia isn’t saying.

But whatever Moscow’s intentions, U.S. and Western officials are increasingly troubled by their rival’s interest in the 400 fiber-optic cables that carry most of world’s calls, emails and texts, as well as $10 trillion worth of daily financial transactions.

There are 400 fiber-optic cables stretching across the world’s oceans. All told, there are 620,000 miles of fiber-optic cable running under the sea, enough to loop around the earth nearly 25 times, as illustrated in the map above. These subsea cables carry most of world’s calls, emails and texts

‘We’ve seen activity in the Russian navy, and particularly undersea in their submarine activity, that we haven’t seen since the ’80s,’ Gen. Curtis Scaparrotti, commander of the U.S. European Command, told Congress this month.

Without undersea cables, a bank in Asian countries couldn’t send money to Saudi Arabia to pay for oil. U.S. military leaders would struggle to communicate with troops fighting extremists in Afghanistan and the Middle East.

A student in Europe wouldn’t be able to Skype his parents in the United States.

All this information is transmitted along tiny glass fibers encased in undersea cables that, in some cases, are little bigger than a garden hose.

All told, there are 620,000 miles of fiber-optic cable running under the sea, enough to loop around the earth nearly 25 times.

Most lines are owned by private telecommunications companies, including giants like Google and Microsoft. Their locations are easily identified on public maps, with swirling lines that look like spaghetti.

While cutting one cable might have limited impact, severing several simultaneously or at choke points could cause a major outage. 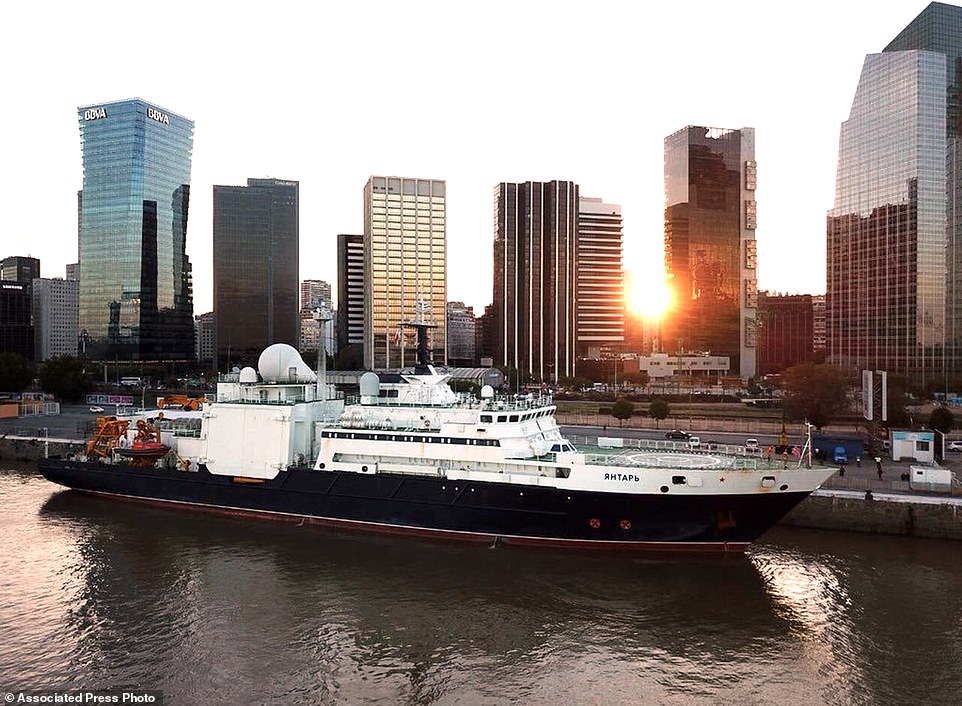 In this 2018 photo provided by Gonzalo Mórtola, the Russian research vessel Yantar is shown docked in Buenos Aires, Argentina. Russian ships are skulking around underwater communications cables, worrying the U.S. and its allies the Kremlin might be taking information warfare to new depths

The Russians ‘are doing their homework and, in the event of a crisis or conflict with them, they might do rotten things to us,’ said Michael Kofman, a Russian military expert at nonprofit research group CNA Corp.

It’s not Moscow’s warfighting ships and submarines that are making NATO and U.S. officials uneasy.

One ship run by the directorate is the Yantar. It’s a modest, 354-foot oceanographic vessel that holds a crew of about 60.

It most recently was off South America’s coast helping Argentina search for a lost submarine.

HOW MANY SUBSEA CABLES HAS GOOGLE INVESTED IN TO DATE?

So far, Google says it has directly invested in 11 subsea cables. This includes some that are currently under construction, and cables that have yet to be built, including three which the firm just recently announced. 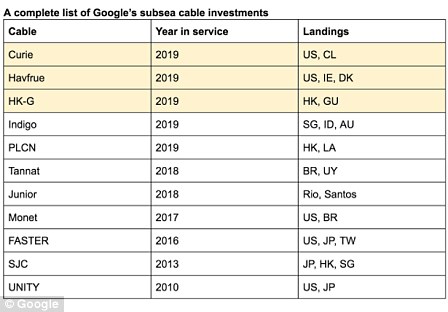 The latest cables will add five regions to its service areas, with plans to open the Netherlands and Montreal regions in the first quarter of 2018, followed by Los Angeles, Finland, and Hong Kong.

Cables stretching across the oceans carry more than 90 percent of the world’s traffic.

Back in 2016, Google announced it would be building an 8,000-mile undersea cable across the Pacific Ocean by 2018.

It has since adjusted this target to 2019. The PLCN will stretch from Los Angeles to Hong Kong.

It is an ultra high-capacity system, capable of 120-terabits-per-second. This is twice the capabilities of the Faster cable, which connects the US to Japan.

The team says it would be able to support 80 million simultaneous HD video conference calls between Asia and North America.

So far, Google says it has directly invested in 11 subsea cables. This includes some that are currently under construction, and cables that have yet to be built, including three which the firm just recently announced. Google’s Cloud Network is shown above

The publication said that in September 2015, the Yantar was near Kings Bay, Georgia, home to a U.S. submarine base, ‘collecting information about the equipment on American submarines, including underwater sensors and the unified (U.S. military) information network.’

Rossiya, a Russian state TV network, has said the Yantar can not only connect to top-secret cables, but could cut them and ‘jam underwater sensors with a special system.’

Russia’s Defense Ministry did not respond to a request for comment.

There is no hard evidence that the ship is engaged in nefarious activity, said Steffan Watkins, an information technology security consultant in Canada tracking the ship.

But he wonders what the ship is doing when it’s stopped over critical cables or when its Automatic Identification System tracking transponder isn’t on. 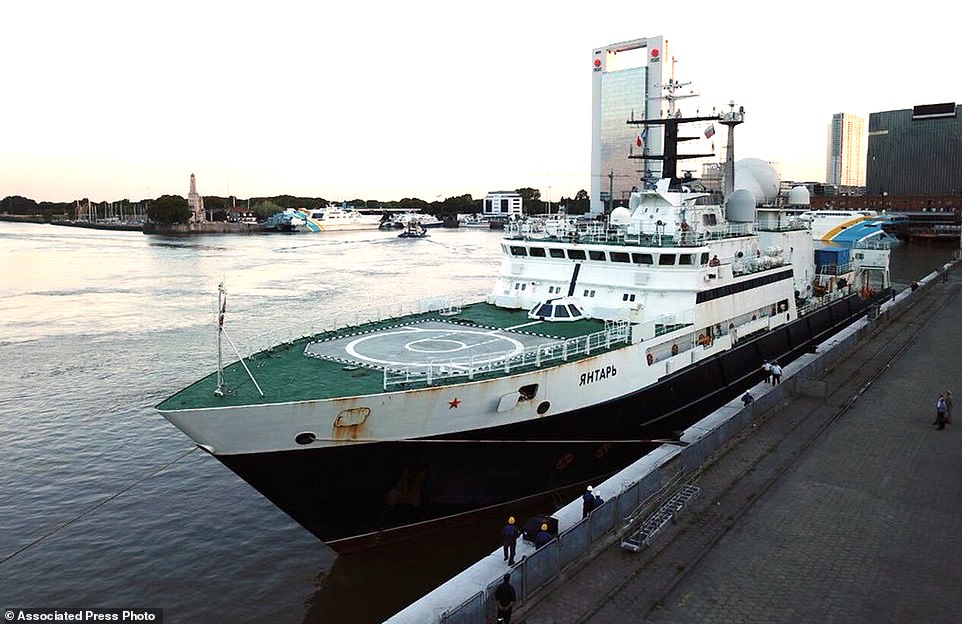 U.S. and Western officials are increasingly troubled by their rival’s interest in the 400 fiber-optic cables that carry most of world’s calls, emails and texts, as well as $10 trillion worth of daily financial transactions. Pictured, the Russian research vessel Yantar is shown docked in Buenos Aires, Argentina

Of the Yantar’s crew, he said: ‘I don’t think these are the actual guys who are doing any sabotage. I think they’re laying the groundwork for future operations.’

Members of Congress are wondering, too.

Rep. Joe Courtney, a Connecticut Democrat on a House subcommittee on sea power, said of the Russians, ‘The mere fact that they are clearly tracking the cables and prowling around the cables shows that they are doing something.’

Democratic Sen. Gary Peters of Michigan, an Armed Services Committee member, said Moscow’s goal appears to be to ‘disrupt the normal channels of communication and create an environment of misinformation and distrust.’

WHAT IS MICROSOFT AND FACEBOOK’S ‘MAREA’ SUBSEA CABLE?

The cable is initially designed to carry 160 terabits of data per second. This is around 16 million times the bandwidth of your home internet connection.

It aim to meet growing demand for high-speed cloud and online services.  The 4,100 mile (6,600 km) cable will be the first to connect the US with southern Europe.

It will be operated and managed by Telefonica SA’s telecoms infrastructure unit Telxius.

Construction began in August 2016 and finished in September 2017, ahead of the targeted completion which had been scheduled for October 2017. 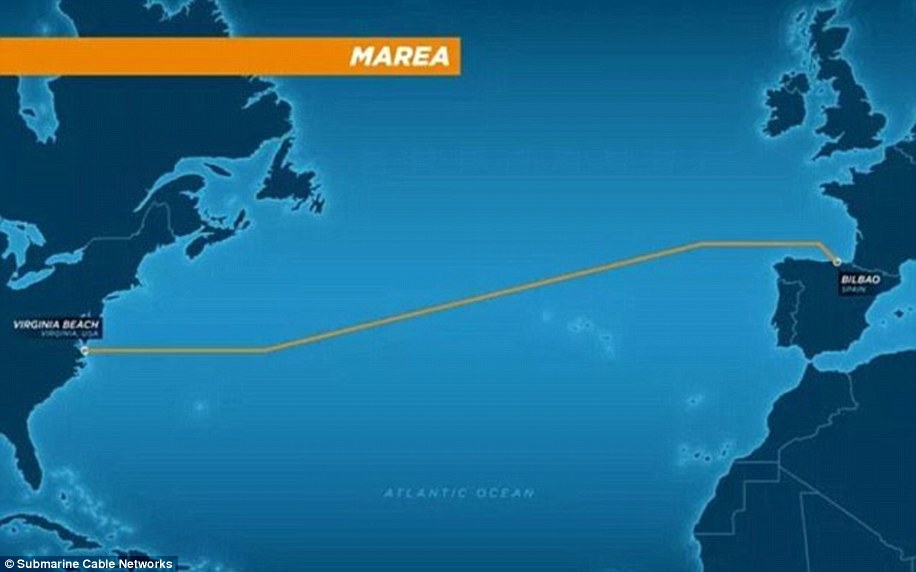 Facebook and Microsoft’s 4,000-mile cable runs from Bilbao, Spain, to Virginia Beach, as illustrated above. It can transmit 160 terabits of data per second. That’s 16 million times faster than the average home internet connection

On Oct. 18, 2016, a Syrian telecom company ordered emergency maintenance to repair a cable in the Mediterranean that provides internet connectivity to several countries, including Syria, Libya and Lebanon.

The Yantar arrived in the area the day before the four-day maintenance began. It left two days before the maintenance ended. It’s unknown what work it did while there.

Watkins described another episode on Nov. 5, 2016, when a submarine cable linking Persian Gulf nations experienced outages in Iran. Hours later, the Yantar left Oman and headed to an area about 60 miles west of the Iranian port city of Bushehr, where the cable runs ashore.

Connectivity was restored just hours before the Yantar arrived on Nov. 9. The boat stayed stationary over the site for several more days. 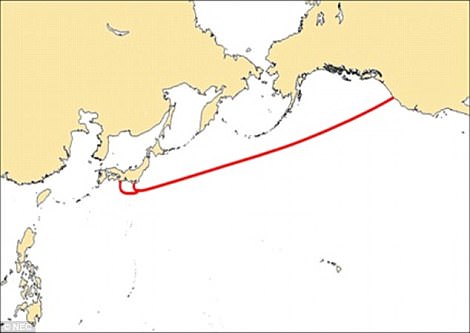 The FASTER cable system can deliver 60 terabits per second of bandwidth 5,600 miles across the ocean. It has landing points in Oregon, in the US, and Chiba and Mie, in Japan

Undersea cables have been targets before.

At the beginning of World War I, Britain cut a handful of German underwater communications cables and tapped the rerouted traffic for intelligence. In the Cold War, the U.S. Navy sent American divers deep into the Sea of Okhotsk off the Russian coast to install a device to record Soviet communications, hoping to learn more about the USSR’s submarine-launched nuclear capability.

In 2007, Vietnamese authorities confiscated ships carrying miles of fiber optic cable that thieves salvaged from the sea for profit.

The heist disrupted service for several months. And in 2013, Egyptian officials arrested three scuba divers off Alexandria for attempting to cut a cable stretching from France to Singapore.

Five years on, questions remain about the attack on a cable responsible for about a third of all internet traffic between Egypt and Europe.

Despite the relatively few publicly known incidents of sabotage, most outages are due to accidents.

Two hundred or so cable-related outages take place each year. Most occur when ship anchors snap cables or commercial fishing equipment snags the lines. Others break during tsunamis, earthquakes and other natural disasters.

But even accidental cuts can harm U.S. military operations.

In 2008 in Iraq, unmanned U.S. surveillance flights nearly screeched to a halt one day at Balad Air Base not because of enemy mortar attacks or dusty winds.

An anchor had snagged a cable hundreds of miles away from the base, situated in the ‘Sunni Triangle’ northwest of Baghdad.

The severed cable had linked controllers based in the United States with unmanned aircraft flying intelligence, surveillance and recognizance missions for coalition forces in the skies over Iraq, explained Ret. Air Force Col. Dave Lujan of Hampton, Virginia.

‘Say you’re operating a remote-controlled car and all of a sudden you can’t control it,’ said Lujan, who was deputy commander of the 332nd Expeditionary Operations Group at the base when the little-publicized outage lasted for two to three days. ‘That’s a big impact,’ he said, describing how U.S. pilots had to fly the missions instead.