Could George Osborne face the first Budget defeat in the Commons since 1994?

George Osborne could face the first Commons defeat by a Chancellor on the Budget since 1994 this week as his plans come under even greater pressure.

A Labour amendment relating to VAT on solar panels has been backed by a dozen Conservative MPs furious at the inability of the Government to make changes because of EU rules.

Another amendment relating to the so-called tampon tax could also be pursued despite the Government securing EU agreement to change the rules.

Anger over the resignation of Iain Duncan Smith could boil over as Tory MPs seek to punish the Chancellor further.

Labour sources said there was a ‘chance’ of an embarrassing defeat for Mr Osborne in the votes despite the Budget being one of the most high profile moments of the political year.

One Tory MP told MailOnline they ‘can’t see why we wouldn’t’ press ahead with the attempt to defeat Mr Osborne.

They said: ‘He’s going to come under a lot of pressure this week.’

Another, furious at the handling of the Budget, said: ‘The fundamental issue is that Parliament and Government are not able to change VAT.’

Labour sources said there was a ‘chance’ of success on both votes.

They said: ‘It’s definitely not good for Osborne.’

The last Chancellor to be defeated on a Budget measure was Ken Clarke in 1994.

Then as now, a furious row over Europe and wider political troubles for the Conservative Party mounted to an embarrassing defeat – on that occasion over petrol VAT.

A Commons defeat would be the second in as many weeks for the Government and Mr Osborne in particular.

Earlier this month, he faced an embarrassingly reverse over Sunday trading – announced in last year’s Budget but actually included in another piece of legislation.

Budget resolutions do not change the law outright but set out the parameters of the Finance Bill which fully updates the law.

The overall Budget is certain to pass a Commons vote. 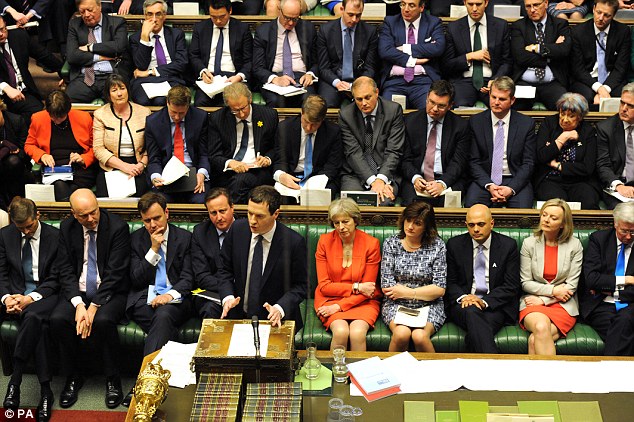