Could going to bed at the same time ease arthritis pain?

Are you a stickler for a schedule, or do you prefer to live life on the fly; eating, sleeping and exercising whenever you find time?

If you veer towards the latter, you could be harming your health. Not only does an irregular routine disrupt sleep, but mounting evidence suggests it could increase your susceptibility to short-sightedness, back pain and even skin cancer.

Why? Because a lack of routine messes with the tiny clocks that tick in every one of our trillions of cells.

Most of us are familiar with our ‘body clock’, sometimes called the circadian rhythm, which — among other things — controls when we feel alert and sleepy.

This is governed by a central clock in the brain, which helps the body keep time with the outside world. Called the suprachiasmatic nucleus (SCN), it consists of a clump of cells in the hypothalamus, and responds to light entering the eyes.

If you change the timing of your light exposure, as you would if you travelled from London to New York, say, the clocks of the SCN will adjust — although this takes several days, hence why we get jet lag, feeling tired at the wrong time of day.

But jet lag can also trigger symptoms such as constipation and mood changes. This is because as well as the master clock in the brain, there are clocks ticking away in each cell in our organs and tissues. 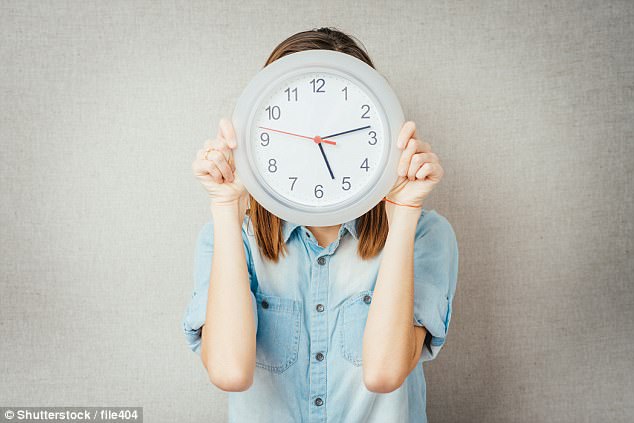 Body temperature, reaction speed, susceptibility to heart attacks or asthmatic symptoms are just some of the things that vary according to time of day

Last week, a major study published in the journal The Lancet revealed that serious complications after heart surgery are more common if the operation is performed in the morning than in the afternoon, as it seems heart cells are at their peak later in the day and so are better equipped to cope with trauma.

Our body clocks are driven by the same core set of ‘clock genes’, which work in sync to regulate the production of proteins, such as hormones, that keep our bodies functioning throughout the day.

They are kept in time with the clocks in other cells — and with the time of day — by the master clock in the brain.

The reason we have all these clocks is to enable us to anticipate recurring events. ‘If your food is arriving at a regular time of day, you want your metabolic clocks synchronised to when you’re going to eat, so that they can process it as efficiently as possible,’ says Jonathan Johnston, a chronobiologist at the University of Surrey.

Body temperature, reaction speed, susceptibility to heart attacks or asthmatic symptoms are just some of the things that vary according to time of day.

Yet it’s not just how your body clocks function according to the time of day that’s important, but how they keep time with each other. When your circadian rhythm is disrupted — such as when working night shifts — your internal clocks will start to adjust.

However, they don’t all do this at the same rate. ‘They’re not just out of synchrony with the outside world, they become out of sync with each other,’ says Qing-Jun Meng, professor of chronobiology at the University of Manchester.

This may have surprising consequences for health. A study published in the journal Ophthalmic and Physiological Optics last month showed young adults who were short-sighted (myopic) had more than three times the level of melatonin in their system in the early morning, compared to those with normal sight.

Melatonin is a key hormone that helps to regulate the SCN in response to light.

Levels of it should rise at night — as it gets dark — to make us sleepy, while melatonin production is suppressed during daylight hours.

‘The study suggests that body clocks of myopic adults are different in some way to the non-myopes — and may be disturbed in a way that increases overall melatonin production,’ says Kathryn Saunders, a professor of optometry and vision science at Ulster University, who led the study.

Although it’s unclear whether the increased melatonin is a cause or a consequence of the myopia, animals studies have suggested that disrupting exposure to the natural dark/light cycle can cause eyes to grow abnormally.

Circadian clocks may also play a part in back pain, as they tick in the intervertebral discs that act as shock absorbers between the bones of the spine.

When Professor Meng disrupted clocks in the discs of mice, deleting one of the clock genes, their spinal discs began to degenerate. ‘It looks as though if you don’t have the daily rhythm, the disc tissue ages much faster,’ he says.

The spine is subjected to massive fluctuations in pressure over the course of the day — in fact, we’re 2cm taller first thing in the morning compared with when we go to bed, due to compression and water loss as the day wears on.

Possibly, a clock enables disc cells to prepare for the heavy load they must bear during the day and to recover from it at night.

As well as light exposure, the timing of meals can disrupt our clocks. Research presented at the Sleep 2017 conference in June revealed eating between noon and 11pm caused weight gain and raised markers associated with heart disease and diabetes, compared with when people ate the same meals between 8am and 7pm.

Tests revealed that when people ate late, they burned more carbohydrates but fewer fats; these excess fats could explain why they gained more weight.

Your body’s response to food differs throughout the day. Take glucose (sugar). Its levels are regulated by hormone signals from the liver, pancreas, muscle and fat tissue, controlled by clocks in these organs.

A study published in the journal Current Biology in June showed that by delaying the time people ate breakfast, lunch and dinner by five hours, they could shift the timing of this daily glucose rhythm.

The impact on weight was not measured, but the study suggested delaying meals can cause the clocks in your body to become desynchronised, perhaps making the system work less efficiently overall. ‘Food timing seems to be a very powerful synchroniser of your metabolic rhythms,’ says Dr Johnston, who led the study.

It’s not just when you eat, but consistency in how much you eat in each meal that matters too.

Gerda Pot, a lecturer in nutritional sciences at King’s College London, has been using data on people’s dietary habits collected over 70 years to understand how day-to-day irregularity in energy intake affects long-term health.

‘Even though they consumed fewer calories, we found people who had an irregular meal routine had a higher risk of developing metabolic syndrome — a cluster of diseases related to cardiovascular and diabetes risk — and of being obese,’ she says.

Inconsistent meal times could have unexpected consequences on our health. For instance, a recent study in mice found that eating at abnormal times disrupted the biological clock in skin cells, including the activity of an enzyme that repairs sun damage.

Assuming the same happens in humans, a disrupted body clock could mean we’re less protected from the sun at crucial times of day, leaving us more susceptible to sunburn and skin cancer.

It’s unlikely that the occasional lapse in routine is harmful. Studies in mice suggest it takes up to a week for the various clocks to lock on to a new meal time, although some do it faster than others.

‘If you have one meal at 10pm, when you usually eat at 6pm, it’s going to have minimal effect on your clocks,’ Dr Johnston says.

But if your clock system is constantly haywire — in that you don’t stick to regular meal or bedtimes — it could have long-term consequences, he adds.

If you can maintain a fixed schedule, then your clocks should be in greater synchrony with your environment

How well the clocks in our bodies are functioning may also play a part in age-related diseases, such as arthritis. This is because the strength of our circadian clocks appears to dampen as we age — although scientists don’t fully understand why. So it may be that problems are exacerbated as our clocks slowly get more out of synch with each other.

Professor Meng is currently applying for a grant to test whether synchronising the body clock by encouraging people to eat, sleep and exercise at regular times could help with symptoms of osteoarthritis in the knee.

‘If you can maintain a fixed schedule, then your clocks should be in greater synchrony with your environment,’ he says.

In other words, in the same way spinal discs have been shown to be affected by circadian rhythms, adjusting to deal with varying demands of the 24-hour day, it may be that the cushioning cartilage in the knees can be primed to work at its best through routine.

Exposure to bright light in the day and reducing light exposure at night is also being investigated as a means of reducing symptoms in people with dementia and Parkinson’s disease. Disturbed sleep and daytime napping are common features of both illnesses, suggesting a disrupted circadian rhythm.

But you don’t have to be ill to benefit from such measures. Walking or cycling to work to maximise exposure to light early in the day, eating regular meals, carving out a consistent time to exercise and keeping a regular bedtime should keep you ticking like clockwork.