Could Hank Gathers have lived?

Hank Gathers was just 23 when he died in the prime of his soon-to-be-blossoming career.

The college basketball player had caught the attention of pundits, fans and coaches nationwide, injecting new life into Loyola Marymount with his fast-paced, gritty style.

He was the nation’s top scorer and rebounder, and he was averaging an impressive 32.7 points per game when he collapsed on March 4, 1990.

The Philadelphia-born forward had been diagnosed with an irregular heartbeat three months earlier after fainting during a game. It has since emerged that he had started to take less and less of his medication, fearing it was affecting his athleticism.

But a new report analyzing the video of his death warns more effective CPR – immediate chest compressions rather than pulling his tongue out of his mouth to prevent choking – could have given him a chance of life. 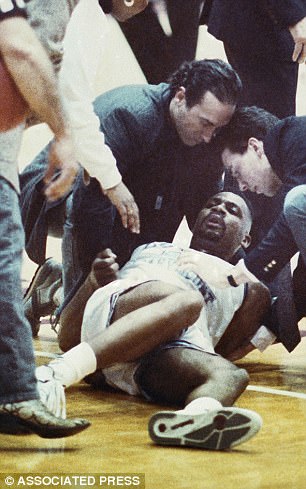 Tragic: Hank Gathers was a 23-year-old star-in-the-making when he collapsed on March 4, 1990, during a game between Portland and Loyola Marymount. The fast-paced forward scored two points through the hoop (left) before suffering a cardiac arrest (right). A new study has found that in his collapse, like with many other sports players, first responders prioritized keeping his tongue out of his mouth. They say chest compressions are the most important

The study by researchers in Tel Aviv, Israel, found Gathers’ first responders spent too much time trying to pull out his tongue out of his mouth – a technique which, they found, appears to be the priority in most sporting leagues when players collapse.

According to the report, this approach was misguided: chest compressions are the most important preventative measure, and should be performed as soon as possible, they say.

The YouTube video of Gathers’ death, viewed more than three million times, shows that for two minutes following his collapse, he received no form of cardiopulmonary resuscitation (CPR).

After analyzing other videos of players collapsing – including that of Boston Celtics player Reggie Lewis a season before Gathers, lead investigator Dr Dana Viskin, from the Tel Aviv Sourasky Medical Center, warns this skewed technique appears to be endemic.

She added that, ‘disturbingly’, his case was not the only one.

In fact, she says, it is almost understandable that Gathers’ first responders focused on his tongue, since most sports teams seem to focus on the tongue if a player falls – even in 2017.

‘The cardiac arrest events of athletes caught on video and available on the internet portray a very disturbing picture of fellow teammates responding to cardiac arrest incorrectly,’ Dr Viskin explained.

‘Prevention and/or relief of “tongue swallowing” appears to take priority over chest compression in the majority of video-documented events.’

The study, published today in the journal HeartRhythm, comes on the heels of a report which showed residents in America’s disadvantaged African-American communities do not have enough resources to learn and teach CPR.

Surviving a cardiac arrest can often seem like a matter of luck.

But one factor plays a crucial role: the racial makeup of your neighborhood.

Compared to people in predominantly white neighborhoods, those who live in predominantly black areas are much less likely to receive CPR or defibrillation from a bystander when their heart suddenly stops beating at home or out in the community.

In primarily white neighborhoods, almost 47 percent of people received help, but in black neighborhoods the rate was just 18 percent – regardless of the race of the sufferer.

It means people in black neighborhoods have a worse chance of survival, according to a study published today in JAMA Cardiology.

Experts warn it shows there is a lack of education about how to perform CPR in African American neighborhoods, as well as a lack of defibrillators.

Cardiologist Dr Peter J. Kudenchuk, of the University of Washington, says this new study is the latest evidence to show we need better education on how to act in the event of a cardiac arrest.

To analyze CPR training and usage in sports, Dr Viskin’s team reviewed 29 videos from 1990-2017 of sudden circulatory arrest (SCA), or loss of consciousness during sports games.

The rescue process of each collapsed player was analyzed with careful attention paid to the first action performed by the first to arrive on the scene.

In videos in which the initial intervention was visible, 65 percent showed actions to prevent tongue swallowing, which included placing the player on his side or tilting his head sideways.

Some rescuers forcefully opened the athlete’s mouth and placed their fingers in the victim’s mouth, sometimes with a visible pull at the tongue.

Further, a defibrillator was brought to the scene in only two cases, and in one of those, the first shock was not delivered until 10 minutes later.

Of the players presenting with cardiac arrest, 36 percent survived.

Twenty-seven years after Gathers’ death, Dr Viskin warns, few first responders at sports games know the proper technique: she found examples of three new cases of misguided CPR in sports during the course of her study.

‘It is interesting since the world seems to be moving forward in regard to technology, medical equipment, and research, but in a field with media exposure to millions of people worldwide, we seem to be over a decade behind,’ Dr Viskin said.

In an editorial published with the study, Dr Kudenchuk emphasizes that the initial moments following collapse are arguably the most critical.

All successive emergency actions depend on the sudden circulatory arrest first being quickly recognized and properly treated. 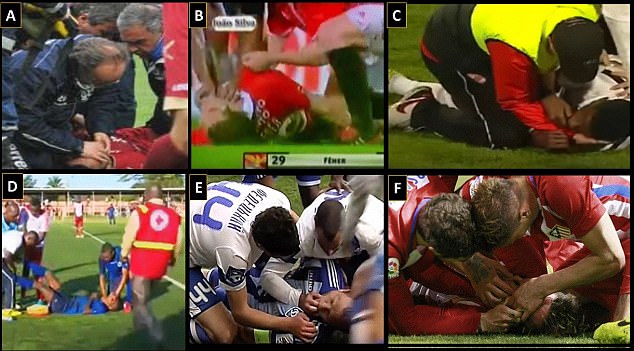 These are some of the examples which the research team analyzed showing athletes undergoing rescue maneuvers. They all prioritized the prevention of tongue swallowing, with responders forcing their fingers into the victim’s mouth. Pictured: soccer games in (A) Italy, (B) Portugal, (C) Romania, (D) Tanzania, (E) Ukraine, and (F) Spain

‘It is during this time period when the battle for survival can all too easily be lost, particularly if SCA is mistaken for something less immediately life-threatening, therapies are misdirected, or not given at all.’

In the past, the traditional approach to resuscitation relied on ABC, or Airway, Breathing and Chest compressions.

Although this guideline was revised by the AHA in 2010 to CAB (Chest Compressions, Airway, Breathing), the old technique may still be holding sway.

Dr. Kudenchuk notes that the newer guidelines assume that all collapses are due to SCA, and require only two questions to be answered: ‘Is the patient conscious?’ and ‘Are they breathing normally?’

Two ‘No’ answers trigger immediate chest compressions. This ‘No, No, GO!’ algorithm is proving to increase survival where it is being used.