Could Italy’s populist coalition be back on the table?

Anti-establishment leader Luigi Di Maio made a move on Wednesday to resurrect a populist coalition in Italy that collapsed at the weekend by offering the president a compromise over a controversial pick for economy minister.

Di Maio, head of the Five Star Movement, said that he was prepared to remove staunch eurosceptic Paolo Savona from his proposed economy ministry post as an olive branch to President Sergio Mattarella.

‘Let’s find someone of the same character and freedom as the excellent Savona, and professor Savona remains in the cabinet, in another role as minister,’ Di Maio said in a video on Facebook.

But he has stalled on announcing his own cabinet, with the presidency saying on Wednesday that they were assessing Di Maio’s offer with ‘great interest’.

‘It doesn’t depend on us but on the other political force that drafted the contract (joint government programme presented earlier in May) with us. This is a great opportunity,’ Di Maio added.

The League has so far insisted on new elections as the party’s polling ratings soar.

But on Wednesday evening, news agency AGI reported Salvini as saying that he would discuss the issue with Di Maio. 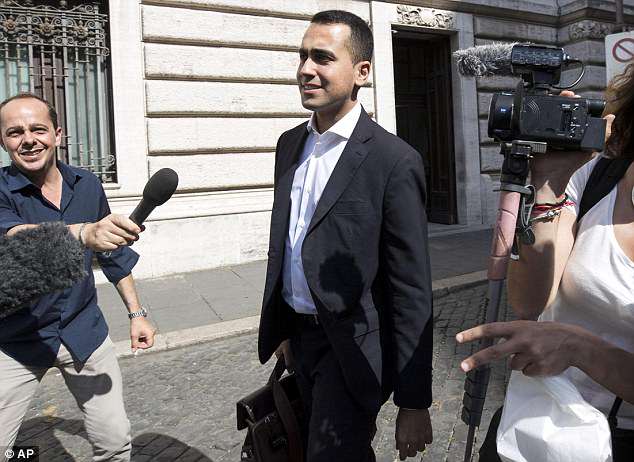 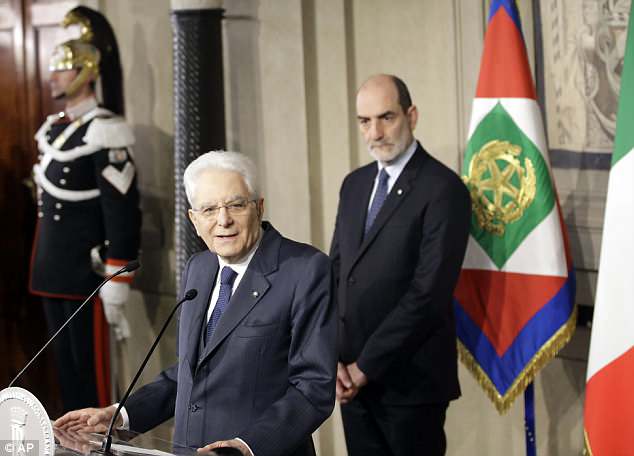 The League had previously said they were in not willing to compromise and continued to demand Savona be given the economy minister role.

Salvini had said the president should either accept the parties’ government line-up in its entirety or call fresh elections.

‘I hope we vote again as soon as possible, but not in July because the Italian people’s holidays are sacrosanct,’ he said.

Di Maio’s proposal comes amid political turmoil nearly three months after an inconclusive election, which has raised concerns about the stability of the eurozone.

The uncertainty prompted Moody’s to place a dozen Italian banks on negative ratings watch Wednesday, including Intesa Sanpaolo, UniCredit and Mediobanca, having already Friday placed Italy’s Baa2 rating on review for a possible downgrade over its political crisis.

Cottarelli, a former IMF economist, left the presidential palace on Wednesday without making a statement after informal talks with Mattarella, not long after Di Maio ended his own brief meeting with the head of state. 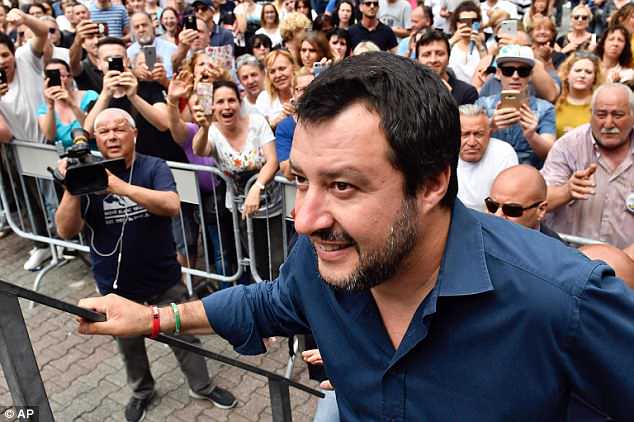 The League has so far insisted on new elections as the party’s polling ratings soar. Pictured, League leader Matteo Salvini 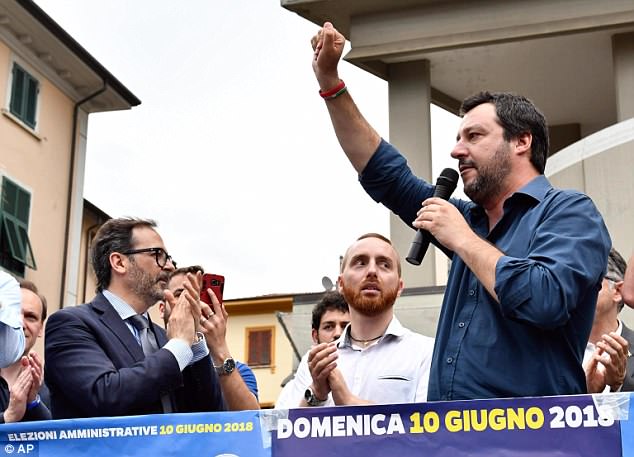 But on Wednesday evening, Salvini was reported as saying that he would discuss the issue with Di Maio

Mattarella’s veto of Savona and subsequent nomination of Cottarelli as caretaker prime minister angered lawmakers, most of whom had been ready to back the eurosceptic as economy minister.

There is almost no chance of his formation gaining parliamentary approval now that Five Star – the largest single party in Italy’s hung parliament – have confirmed that they like the League will vote against.

In the meantime factions in both houses had been trying to reach agreement over how long Cottarelli’s caretaker mandate would last before new elections are held, with officials from the centre-left Democratic Party calling for the country to go to the polls as early as July.

That could only happen if the parliament was dissolved before Friday.

A more likely scenario is new elections in early October, should Di Maio and Salvini not agree on moving Savona to another ministry.

So far, Salvini has made no secret of his hostility to trying again with Mattarella before fresh elections. 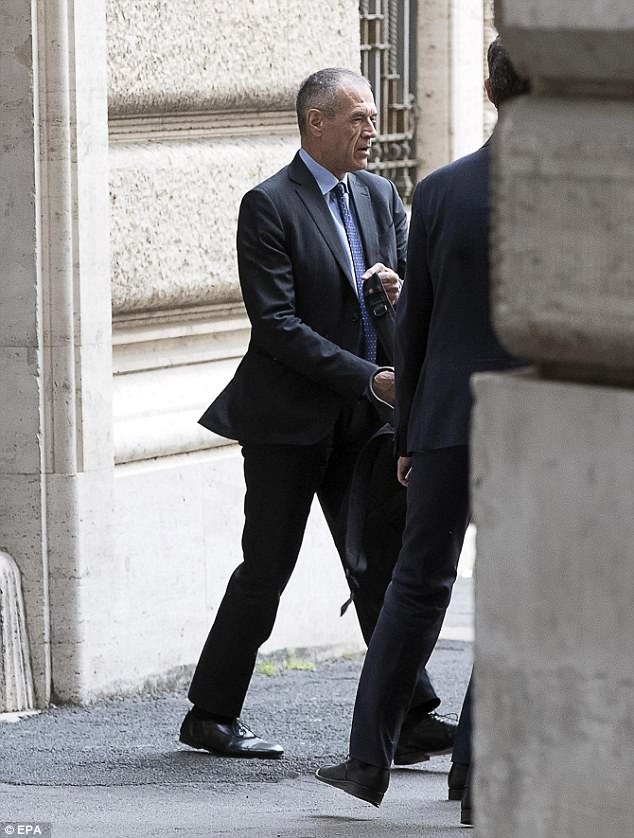 ‘I spent weeks in Rome trying to form a government. It was a futile effort,’ he retorted while campaigning in Pisa on Tuesday.

Instead, he said he would be ready for new elections ‘as soon as possible,’ while rejecting the idea of holding them in July.

Central to the party’s agenda is reform of the EU, spooking markets worldwide and caused a flurry of reaction in Brussels.

‘I can only hope that this will play a role in the election campaign… sending a signal to voters not to hand power to populists on the right and left,’ he told German broadcaster Deutsche Welle.

His comments caused uproar in Italy, prompting European officials to scramble to calm anger at the perceived meddling by Brussels.

Financial markets have been on a rollercoaster ride over the past few days, but Milan stocks closed up 2.09 percent on Wednesday, and the bond market strengthened slightly.

But investor doubts over Italy’s financial stability were far from eased, with the country struggling under a debt mountain of 2.3 trillion euros.

Central bank chief Ignazio Visco had on Tuesday warned about the impact of the turmoil.

‘We are only ever a few steps away from the very serious risk of losing the irreplaceable asset of trust.’