Could LIGHT be the key to finding alien life? ‘Trillion planet survey’ will hunt for alien signals

An ambitious new search for alien life is hunting for light signals for advanced civilizations.

The Trillion Planet Survey has begun using a suite of telescopes to scour the nearby galaxy of Andromeda as well as other galaxies including our own.

Researchers hope to spot a ‘light signal’ beamed by an alien civilization – and say we may have been looking in the wrong place until now.

The ambitious experiment, run almost entirely by students at at Emory University, uses a suite of telescopes, a ‘pipeline’ of software to process images and a little bit of game theory.

‘First and foremost, we are assuming there is a civilization out there of similar or higher class than ours trying to broadcast their presence using an optical beam, perhaps of the ‘directed energy’ arrayed-type currently being developed here on Earth,’ said lead researcher Andrew Stewart, a student at Emory University and a member of Lubin’s group.

‘Second, we assume the transmission wavelength of this beam to be one that we can detect.

‘Lastly, we assume that this beacon has been left on long enough for the light to be detected by us.

‘If these requirements are met and the extraterrestrial intelligence’s beam power and diameter are consistent with an Earth-type civilization class, our system will detect this signal.’

For the last half-century, the dominant broadcasts from Earth has taken the form of radio, TV and radar signals, and these are what projects such as the Search for Extraterrestrial Intelligence (SETI) Institute.

However, recent advances have meant we can now search via optical signals that allow for vastly longer range detection.

‘In no way are we suggesting that radio SETI should be abandoned in favor of optical SETI,’ Stewart added. ‘We just think the optical bands should be explored as well.’ 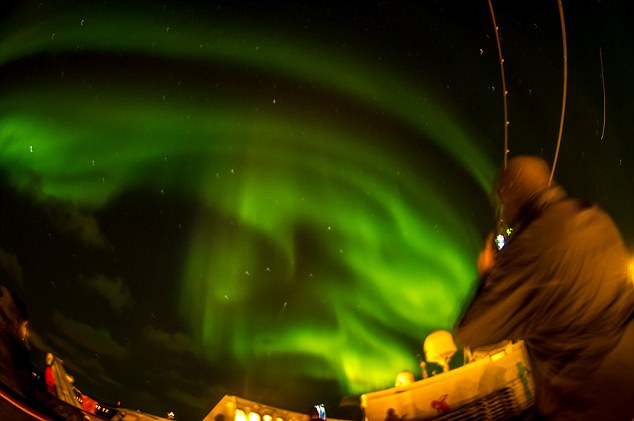 Recent advances have meant we can now search via optical signals that allow for vastly longer range detection. Pictured, a natural light show, the Northern Lights

In a 2016 paper titled ‘The Search for Directed Intelligence’ (or SDI), Philip Lubin, an experimental cosmologist and professor of physics at UC Santa Barbara, outlined the fundamental detection and game theory of a ‘blind-blind’ system in which neither we, nor the extraterrestrial civilization are aware of each other but wish to find one another.

That paper was based on the application of photonics developed at UC Santa Barbara in Lubin’s group for the propulsion of small spacecraft through space at relativistic speeds (i.e. a significant fraction of the speed of light) to enable the first interstellar missions.

That ongoing project is funded by NASA’s Starlight and billionaire Yuri Milner’s Breakthrough Starshot programs, both of which use the technology developed at UCSB.

The 2016 paper shows that the technology we are developing today would be the brightest light in the universe and thus capable of being seen across the entire universe, and sparked the project.

HOW THE SEARCH WILL WORK

‘We’re in the process of surveying (Andromeda) right now and getting what’s called ‘the pipeline’ up and running,’ said researcher Alex Polanski, a UC Santa Barbara undergraduate in Lubin’s group.

A set of photos taken by the telescopes, each of which takes a 1/30th slice of Andromeda, will be knit together to create a single image, he explained.

That one photograph will then be compared to a more pristine image in which there are no known transient signals — interfering signals from, say, satellites or spacecraft — in addition to the optical signals emanating from the stellar systems themselves.

The survey photo would be expected to have the same signal values as the pristine ‘control’ photo, leading to a difference of zero.

But a difference greater than zero could indicate a transient signal source, Polanski explained.

Those transient signals would then be further processed in the software pipeline developed by Stewart to kick out false positives.

Other vagaries, according to the researchers, include sky conditions, which is why it’s important to have several telescopes monitoring Andromeda during their data run.

The researchers asked, ‘What if there are other civilizations out there that are less shy about broadcasting their presence?’

‘At the moment, we’re assuming that they’re not using gravity waves or neutrinos or something that’s very difficult for us to detect,’ Lubin said.

The search, for any SETI-watcher, is an exercise in patience and optimism. Andromeda is 2.5 million light-years away, van der Veen pointed out, so any signal detected now would have been sent at least 2.5 million years ago — more than long enough for the civilization that sent it to have died out by the time the light reaches us.

‘That does not mean we should not look,’ van der Veen said.

‘After all, we look for archaeological relics and fossils, which tell us about the history of Earth.

‘Finding ancient signals will definitely give us information about the history of evolution of life in the cosmos, and that would be amazing.’