Could this new vacuum cleaner dry your hair in record time?

Could this new vacuum cleaner dry your hair in record time? FEMAIL gives verdict on RevAir ahead of its UK launch

By Claire Coleman for the Daily Mail

Would you use a vacuum cleaner to dry your hair in a fraction of the time?

It sounds absolutely ludicrous, but the makers of RevAir, a revolutionary new hair drying device that uses suction (or reverse air flow, as they call it) are hoping that the answer is yes.

The device launches in the UK next month, and at a staggering £359, £60 more expensive than the Dyson dryer, it’s going to have to go some to convince consumers it’s worth the cash.

The claim of dry hair in a third of the usual time is appealing, as is the promise of less frizz, more shine and a environmentally friendly dry — it uses 50 per cent less energy than blow drying.

Claire Coleman (pictured) gave her verdict on RevAir ahead of its UK launch, the revolutionary device works by reversing air flow

But can these outweigh the combination of size — it’s made up of a Toblerone-shaped base unit that generates the suction, a hose, and a hand-held section with a bulbous part that houses the element that produces the heat — and a very large price tag?

The idea was the brainchild of siblings Kip Cooper and Debra Isaacson. Kip created his daughters’ ponytails using a vacuum with a hairband over the nozzle, and Debra, who worked in advertising and marketing, thought that a dedicated ponytail attachment for a vacuum cleaner could be a potential moneyspinner.

With the help of an engineer friend, Scott Thomason, they began designing a prototype, but soon realised there were more significant challenges that suction could solve.

By adding heat they could create a revolutionary hair dryer that could dry hair more easily. The suction creates tension on the hair, replacing the need for a brush and, it is claimed, you can dry hair at a lower temperature — or with no heat at all, as the pressure of the vacuum sucks the water out of the hair and it evaporates as it goes down the hose.

Obviously, I had to put it to the test. First off, this thing was loud, louder than any dryer I’ve owned. And getting the hang of it took a few minutes. Then it’s a question of heat — none, low (around 70c) or high (around 105c). I used the highest, but was astonished to find that I hardly felt any heat on my scalp at all. No burning, and no overheating when you want to blow-dry during the summer. 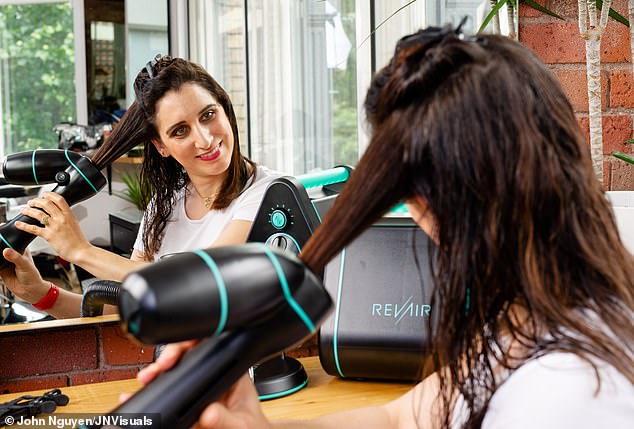 Claire (pictured) says her hair was straight, smooth and soft after using RevAir, but it lacked volume at the roots

I divided my hair into sections around an inch square (much bigger than the sections I’d dry with a regular dryer), combed them, then fed them into the wand. Around 60 seconds later — with trial and error on timings — the weft was straight, smooth and dry. There’s no doubt it was quicker — about twice as quick as blow drying.

The only issue was that I didn’t love the end result. My hair was straight, smooth and felt soft, but I didn’t have much volume at the roots, and the ends needed curling under. Debra told me that she finishes her hair off with straightening irons, but that RevAir makes drying it much easier.

I don’t think the RevAir’s for me. However, if you have really thick hair, you’re a family with long, thick hair and everyone fights for the dryer every morning, or you want to speed-dry your hair so you can use tongs or straighteners — that’s when it comes into its own.

If you’re even slightly tempted, you can try it risk free as they offer a 30-day guarantee so, if after a month you’re not convinced, you get your money back — no questions asked. 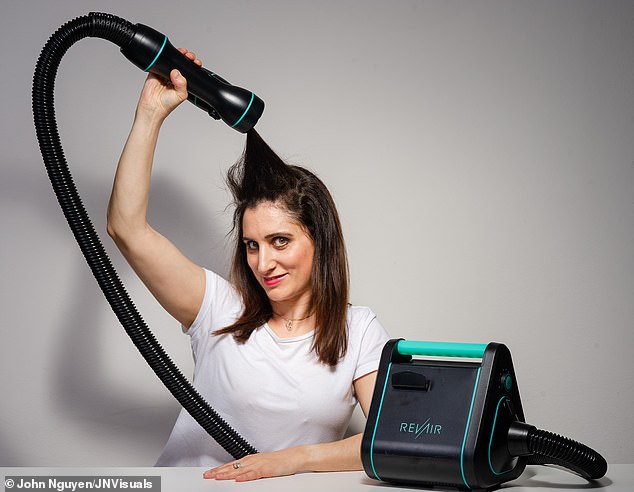