Could wearing goggles help you sleep and lose weight?

Specs are no longer just for seeing with — there are now a range of high-tech smart ‘goggles’ to treat a host of conditions, from diabetes to vertigo.

There are even goggles to help you lose weight.

FOR DIABETES AND INSOMNIA

Goggles that shine bright light into the eyes are being tested as a treatment to prevent type 2 diabetes. They are based on the idea that the body clock, which controls the release of hormones, is regulated by light.

Light-detecting cells in the eyes, known as photoreceptors, send signals to the body clock in the brain, which then sets our sleep and wake rhythms.

Recent research by Northwestern University Hospital in the U.S. showed that our body clocks also dictate when the pancreas produces insulin in order to control blood sugar, with our sensitivity to insulin reducing during the night, according to another study published in the journal Diabetes last year.

Re-Timer: Goggles that shine bright light into the eyes are being tested as a treatment to prevent type 2 diabetes.

These circadian rhythms, as they’re known, can be impaired by staying indoors, working irregular hours, or a lack of sunlight in winter.

The goggles, called Re-Timer, have four tiny light-emitting diodes (LEDs) built into the top of the frame — they look like a pair of white specs without lenses. The lights are switched on to expose the eyes to bright light in the morning to increase insulin sensitivity and lower blood sugar.

The goggles are being trialled at Northwestern University with 34 patients with pre-diabetes. They will wear them for an hour each morning for four weeks and their glucose levels will be measured.

The glasses were first developed to treat insomnia and jet lag. For sleep problems, they use green light which stimulates the part of the brain responsible for regulating the sleep-wake cycle.

Israel-based Spoton Therapeutics’ goggles look like ordinary specs, but the lenses have ‘marks’ — tiny rectangles — on them to help patients with dizziness.

The marks are placed so they are in the patient’s peripheral vision. These reference points are thought to help steady the user.

The glasses are now being used in a clinical trial at the Meir Medical Center in Israel. Previous trials found that 67 to 80 per cent of patients had significant improvement or their symptoms disappeared while wearing them.

Jaydip Ray, a professor of otology and neurotology at the University of Sheffield, said: ‘Patients with dizziness and vertigo often have a mismatch between their visual and positional clues. This technology is an interesting way to correct this mismatch.’

This is based on the idea that feelings of fullness are influenced, in part, by what we see, and the brain can be tricked into believing we have eaten more than we have.

Research at the University of Tokyo suggests people will eat nearly 10 per cent less. The specs can also emit a variety of scents as you eat a cookie, tricking your taste buds into thinking you’re having different flavours. 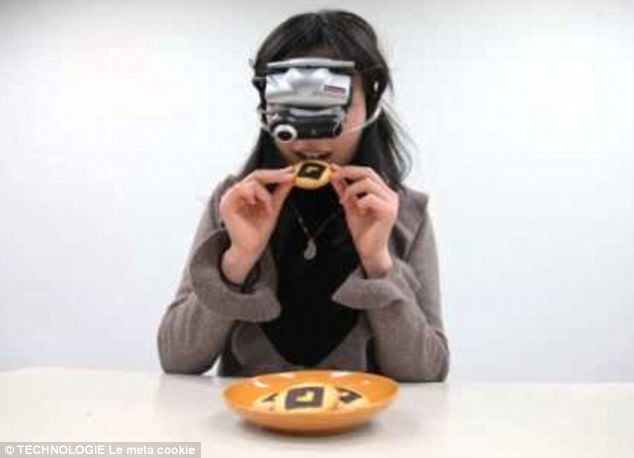 Special virtual reality goggles have been developed to tackle the symptoms of Parkinson’s.

The progressive disease is caused by a loss of cells in the brain that help control movement and other functions: one of the main symptoms is problems with gait, which can lead to falls.

A number of centres have been investigating the use of virtual reality, where images, including steps and stairs, are superimposed onto the real view through goggles while the patient walks on a treadmill, to retrain the brain.

Last year, a study at Tel Aviv University in Israel with 25 people showed that after six weeks, patients increased their walking speed and stride length, had greater endurance, and were better able to navigate around obstacles.

‘Patients also reported enhanced quality of life and fewer falls and near falls,’ said the researchers.

Doctors have developed goggles that display distracting images to reduce the need for painkillers when burns dressings are changed. In a study at Oregon Clinic’s Burns Unit involving 18 patients, half wore the goggles and watched 3D images while their dressings were changed. They needed 39 per cent less painkilling medication, reports the Journal of Burn Care Research.

Older and infirm people can often experience problems with eating, but it is tricky for healthcare staff to monitor this, especially if the patient is living at home.

Researchers have developed smart specs that can do just that, reported the Journal of Biomedical Health Information last year.

The device — like a regular pair of specs — contains tiny electrodes in the arms which measure electrical activity in the muscles of the face involved in chewing.

A study at the University of Passau, Germany, involving ten people found the specs can spot when people are eating, what type of food and whether it is hard or soft, with 95 per cent accuracy.