Could you be the next Tim Peake? Astronaut reveals the biggest challenges new recruits fave

Astronaut Tim Peake has revealed the biggest challenges new recruits face when it comes to travelling to outer space.

He said budding astronauts must face a gruelling day of tests that evaluates your concentration, memory and spatial awareness.

But the 46-year-old, who spent 185 days aboard the International Space Station between 2015 and 2016, says he found learning Russian the toughest challenge.

He revealed in a new interview that grappling the language was the area he had to work hardest at, as he needed to be fluent in order to keep his Russian colleague’s aboard the space station safe.

Despite finding it the hardest challenge, Peake said it was one requirement which had helped him to keep his colleagues safe.

‘In the space craft only Russian is spoke, all the documentation is in Russian and on board the space station I had to help my two Russian colleagues do a space walk.

‘So to get them out safely and get them back in safely,  their lives were in my hands.

‘I came from a very technical scientific background and so I didn’t really have a problem with those aspects but languages were never my strong points so learning Russian was really quite hard.’

In the interview with This Morning’s Phillip Schofield and Rochelle Humes, Peake said it was important for current astronauts to bust the myths surrounding how you actually become an astronaut, and also highlighted how this had been one of the inspirations behind his new book titled ‘The Astronaut Selection Test Book’. 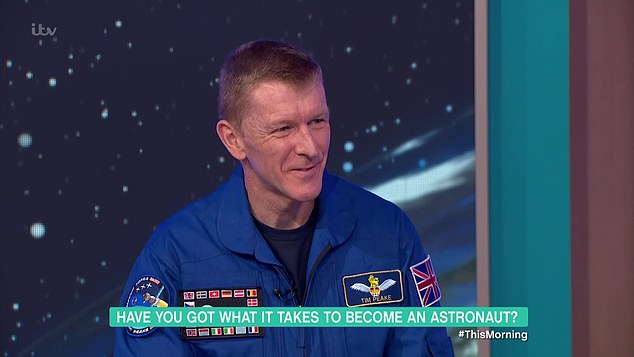 ‘You have to demystify the process of how we select astronauts and what we expect of astronauts and more importantly the next generation which is going to be fascinating, looking at returning to the moon, and then going on to missions to mars and they are the skills we need for the next bunch of recruits.’

However, those who are keen on embarking on a career as an astronaut will have to have that certain something in order to be successful and Peake said it’s not always about the skills you may already posses.

‘Hard skills are the non-trainable skills – you have either got it or you haven’t to some degree. 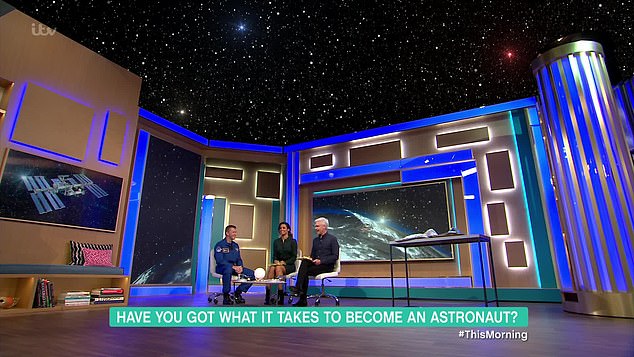 ‘It’s a very very intensive day, there are a whole bunch of test thrown at you, mostly computer based testing things like concentration, memory retention special awareness and all of these kinds of aspects that I found very challenging.’

As well as having to learn Russian, in order to become an astronaut, Peake said that you have to take part in a gyroscope test.

‘We sometimes use them in the selection and training process and it helps acclimatise to you to the perception that you might have in space.

‘For example when you re-enter the earth’s atmosphere the space craft is tumbling for the initial stages fairly out of control and at that same time you are also having to focus and concentrate in the space craft on what the systems are dong and getting ready for re-entering.

‘So we are asking people to have mentally demanding skills where there are also physical challenged.’

WHO IS TIM PEAKE?

He finished his 186-day Principia mission working on the International Space Station for Expedition 46/47 when he landed back on Earth 18 June 2016.

The 46-year-old Tim has a background as a test pilot and a British Army Air Corps officer. 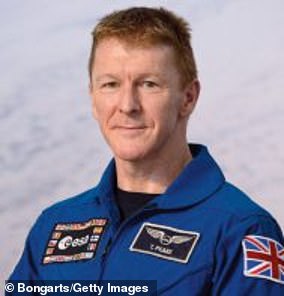 Time rose to fame after he was the first British ESA astronaut to visit the International Space Station, launching on a Soyuz rocket on 15 December 2015 with crewmates Tim Kopra and Yuri Malenchenko.

In the first month of his mission, Tim conducted a spacewalk to repair the Station’s power supply. He also drove a rover across a simulated Mars terrain from space and he helped dock two spacecraft.

He also took part in over 250 scientific experiments for ESA and international partners during his mission.

The mission also focussed on educational outreach, engaging more than 1.6 million schoolchildren across Europe in over 30 projects during his time in space. Tim returned to Earth on 18 June 2016 and since then has penned a book in order to demystify what it actually takes to become an astronaut.

The Astronaut Selection Test Book was designed to find out whether or not you have what it takes to become an astronaut.

It includes 100 real astronaut tests and training exercises for readers to try at home and outlines the full ESA process for the first time. From visual memory and perception puzzles to teamwork exercises, survival skills and foreign language aptitude tests, the questions wildly vary in difficulty.