A council is looking at making pet owners take a test so people who mistreat animals can be weeded out.

The plan is to be put to the Municipal Association of Victoria’s state council on Friday, by the Frankston council.

Kris Bolam, the Frankston councillor who proposed the idea, said it aims to address the problem of the large number of animals being mistreated.

Those who didn’t pass ‘shouldn’t even be looking at owning a pet’, Cr Bolam told the Herald Sun.

Frankston councillor, Kris Bolam (pictured) has proposed that a test be introduced to weed out bad pet owners

‘The incidences of neglect, apathy and abandonment we often hear and see through media outlets relating to animals should be a clarion call for action.’

‘We expect parents to demonstrate capability to be responsible parents but we don’t expect the same standard when talking about pet ownership.’

‘As a society, we should be expecting the same level of personal investment and responsibility by budding pet owners towards their pets,’ Cr Bolam said.

But Save-A-Dog Scheme president Pam Weaver said the test would have to cover a large range of variable to be truly effective.

She also said that why the proposal is well-intentioned, it is impractical as pet ownership is a responsibility that is too complicated for one framework.

The upcoming motion doesn’t specify the types of questions owners would need to answer. 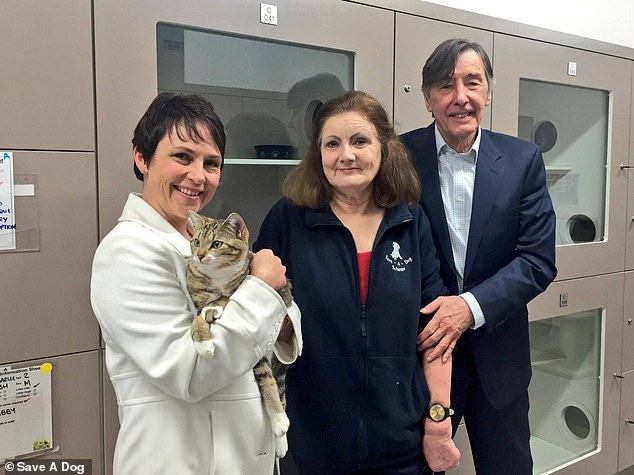 Save-A-Dog Scheme president, Pam Weaver (pictured centre) says the test would have to cover a large range of variable to be effective