Council wants to ban swings, climbing frames and slides because they are too biased to under-sevens

A killjoy council has spent nearly £10 million on a scheme to rid its playgrounds of swings, roundabouts, climbing frames and slides because they are ‘clearly biased towards four to seven-year-olds’.

Kirklees Council in West Yorkshire is replacing the traditional play equipment with grass, logs and boulders to encourage children to get back to nature.

And now angry parents are threatening to chain themselves to the equipment to stop workmen removing it.

John Shone, now 21, was only 11 when he and his friends raised £100,000 through corporate sponsorship to revamp their playground, which is now to be ripped apart

Before next year, £9.5 million of charge payers’ money will dismantle 137 playgrounds.

The bizarre scheme is partly based on a study of children in American schools which argued they played better in green areas.

But the Yorkshire parents and their children raised hundreds of thousands for a number of the playgrounds to be upgraded only a few years ago.

After learning this week that these too are on the council hit list, they are threatening to chain themselves to the equipment.

John Shone was only 11 when he and his friends raised £100,000 through corporate sponsorship to revamp their playground, which is now to be ripped apart.

Now a 21-year-old student, he stormed: ‘It’s ridiculous. When we were kids we went there for the swings, climbing frames, and slides – not to sit on logs and plastic boulders.

‘We raised £100,000 to have the park upgraded. The council did not pay for anything and now they say they are take all the equipment out and turning it into a field.

‘They say they have to do this all over because the equipment is getting old but from what I have seen it is not damaged or dangerous and is very well used.

‘The council will have a fight on their hands if they do try to remove it. It is ludicrous to say it is biased towards younger kids. They are the ones who use playgrounds.’

Residents are also confused why the council wants to create ‘open spaces’ when Kirklees is on the edge of Pennines and Last of the Summer Wine country.

But the council is following its own study, Living Play 2020, which is partly based on ideas from North Carolina State University about ‘connecting children with nature’.

The council report states: ‘When we consider the age in which the current play areas are targeted, there is a clear bias towards provisions designed for 4-7 year olds. ‘ 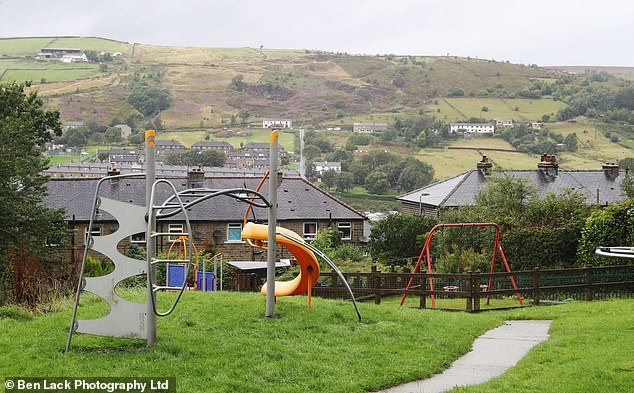 Kirklees Council in West Yorkshire is replacing the traditional play equipment with grass, logs and boulders to encourage children to get back to nature

The Wildlife Trust has also reported that over the last four generations, children have become increasingly disconnected from nature.

‘It suggests that our generation of children is growing up ‘at arms-length from the natural world’.

‘Through a revised play strategy we want to help reinstate and facilitate “wild” play and diversify play opportunities throughout Kirklees.’

More than 2,000 parents have petitioned against the plan. Protest organiser and local gran Donna Bellamy said: ‘It’s a crackpot idea and quite bizarre.

‘I just can’t believe or understand why they want to spend all this money taking away things that children love. The idea the equipment is old and dangerous is nonsense.’

If the workmen try to remove the equipment the parents of children who raised the money for it are going to chain themselves to the swings and I will be joining them.’

A council spokesperson said: ‘It needs to be understood that the playable spaces strategy is not about removing equipment for the sake of it nor closing any spaces at all.

‘It is about investing £9.5m into areas of play and recreation that all of our residents can use and enjoy.

‘Kirklees Council is committed to providing our residents with healthy space and equipment that they can enjoy for years to come.

‘We will be doing this by talking to our residents, ward councillors and community groups to achieve the best outcomes in the hundreds of playable spaces we have. It has never been the plan, nor will be, to close any playable space.’

But Harry Fone, Grassroots Campaign Manager at the TaxPayers’ Alliance said: ‘The council is behaving like a playground bully with no regard for anyone else.

‘This scheme is pure lunacy and a ridiculous waste of taxpayers’ money.

‘Why doesn’t the council focus money and time on things that local residents actually want?

‘If the council weren’t intent on ripping up play areas, they could spend the money improving them instead.’