An investigation is underway after workers were seen throwing rubbish from a 40ft high block of flats.

The incident in East Kilbride, Lanarkshire, was caught on camera by a member of the public.

In pictures the two workers can be seen peering precipitously off the edge of the building after one throws material to the ground below. 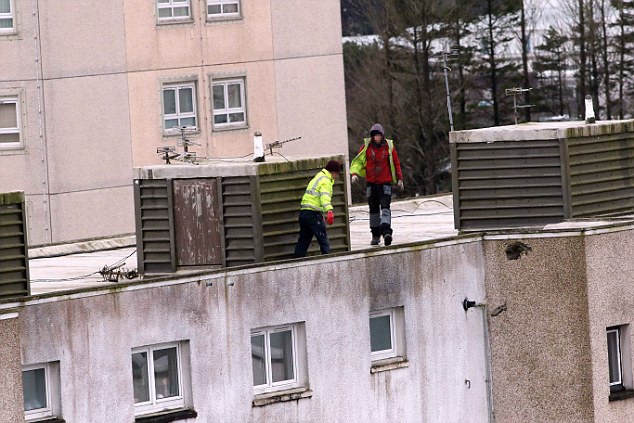 The workers were arrived at the residential site in a South Lanarkshire Council van before making their way to the top of the building, according to onlookers.

They started clearing up the roof before one of them was seen discarding rubbish over the side.

Pictures show the men peering over the edge of the building after handfuls of rubbish had been cast down.

Members of the public were seen walking in the area when the men were on the roof but no one has been reported as being injured.

Council officials have launched an investigation into the incident which happened on March 5.

One onlooker said: ‘I looked out of my window and saw two council workmen on the roof of the block of flats.

‘They were walking very close to the edge of the roof and leaning over and it didn’t look very safe.

‘They appeared to be cleaning the roof and sweeping up debris then one threw handfuls of rubbish over the side of the building to the ground below.

‘I was very surprised at this as these are busy flats. They were on the roof for over an hour before driving off in a South Lanarkshire council van.’ 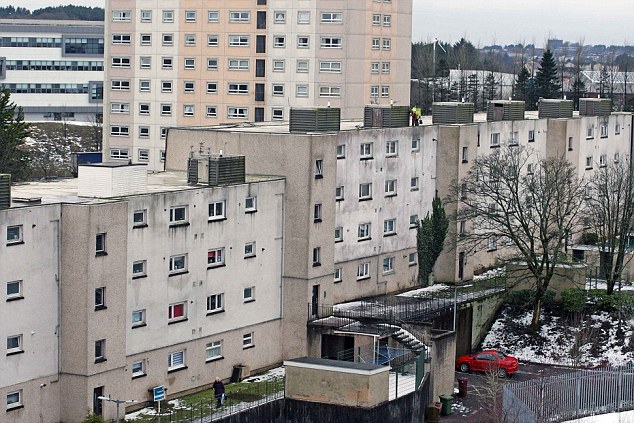 The incident in East Kilbride, Lanarkshire, was caught on camera by a member of the public

Dr Karen McDonnell, occupational safety adviser for the Royal Society for the Prevention of Accidents(RoSPA) said: ‘Work at height remains one of the most significant causes of fatalities and major injuries in Great Britain and falling objects also pose a risk to employees and members of the public alike.

‘Activities where there is the potential for either require planning, supervision, and should be conducted by competent people.

‘The process should be underpinned by a suitable and sufficient risk assessment.’

Health and Safety Executive(HSE) guidance says material should never be thrown from a roof and harnesses should be worn when working at height.

An HSE spokesman said the incident had not been reported to them.

Frank McCafferty, head of property services at South Lanarkshire Council, said: ‘The council will carry out an investigation into the incident reported and appropriate action will be taken against any employees who have breached the council’s policies.’