Councillor, 76, is accused of sexism after suggesting his female colleagues should get extra expenses because they buy more clothes than men

A councillor has been accused of sexism for suggesting women colleagues should receive a bigger allowance than men because they buy more clothes.

Chris Bithell, of Labour-run Flintshire County Council, said female members of the authority needed more cash than men, who could get away with ‘two suits from Marks & Spencer’.

He made the comments at a meeting to discuss a proposed £350 rise in councillors’ annual allowances. But his colleague Gladys Healey, one of only two women present, said: ‘It is a male-dominated council at the moment and you bringing up a subject like that is quite infuriating.’

Councillors at the authority in North Wales – who are not paid a salary – receive an allowance of almost £14,000 a year. Committee chairmen and cabinet members get £29,300 and the leader gets £48,300.

Talking about how much they might need to spend on clothes, Mr Bithell said: ‘We’ve got to expect a man could get away with buying two suits from Marks & Spencer, which would probably do him for the year. With a female, obviously they have to have a different dress or suit for most occasions.’

But fellow Labour councillor Mrs Healey, 68, criticised him, saying: ‘A man can wear a suit, but how many shirts does he wear? Okay, I’ve got a wardrobe full of clothes because I like dressing in different things and I like to be decent, but I think that is quite a sexist comment.’

Mr Bithell defended his remarks, saying he was aiming to be considerate towards women. 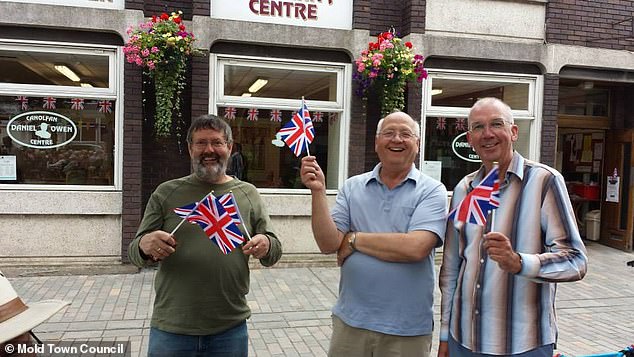 The 76-year-old, who represents Mold East and is cabinet member for planning and public protection, was previously accused of making ‘disgusting’ comments about a Conservative councillor’s weight.

When Hilary Isherwood expressed anger at the closure of a school during a council debate in 2017, Mr Bithell – who was then in charge of education – said she had not put forward her objections ‘until the 11th hour’, adding: ‘She said the issue isn’t over until the fat lady sings.’

Mrs Isherwood stormed out of the meeting, saying: ‘I am disgusted with this council.

‘I have been called ‘fur coat, no knickers’… now our cabinet member for education is calling me the fat lady.’ Mr Bithell stated that he was simply quoting what she had said.

Earlier this month the council’s deputy leader, Carolyn Thomas, described meetings as a ‘man’s world’ after male colleagues interrupted her.

In February, a cross-party group was set up to support women on the council amid claims an ‘old boys’ club’ was still in existence. A council spokesman declined to comment yesterday.