Over the coming days it will, once again, be the focal point of global attention as the world tunes in for the Platinum Jubilee celebrations.

With the possible exception of the White House, Buckingham Palace is arguably the most famous and instantly recognisable home on Earth.

But what might it look like in future? The Palace has undergone plenty of extensions and makeovers during its 350-year history, so it’s entirely possible that there might be a few more.

In honour of this great anniversary, Country Life magazine (which respectfully argues that the Palace looks a tad ‘dull’) has invited some of Britain’s leading architects to envisage what future generations might find at the end of the Mall.

Converted by John Nash in the 1820s, Buckingham Palace (pictured), with its Portland stone facade, is considered by some architects to look ‘dull’ 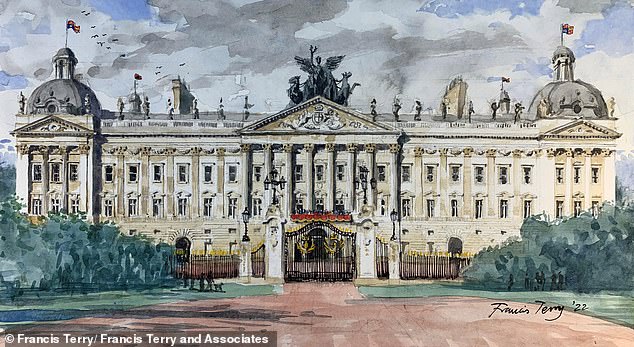 Francis Terry includes a wider portico, domes, framing trees and a vast winged statue on top to enliven a ‘dull silhouette’. He says: ‘I am unusual in my profession because I actually like Buckingham Palace . . . Apart from these small tweaks, the rest should stay as it is’ 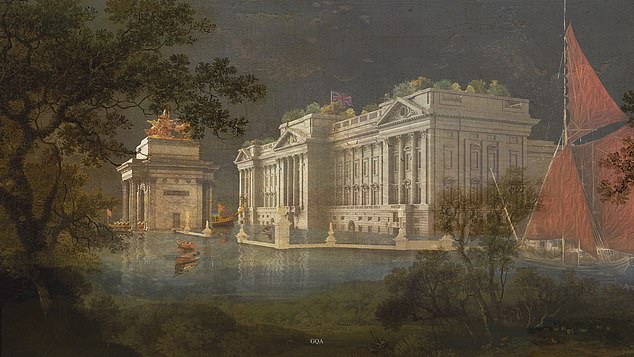 Natasha Brown’s vision of a flooded London. She says: ‘Exercising the corgis might be a challenge’ 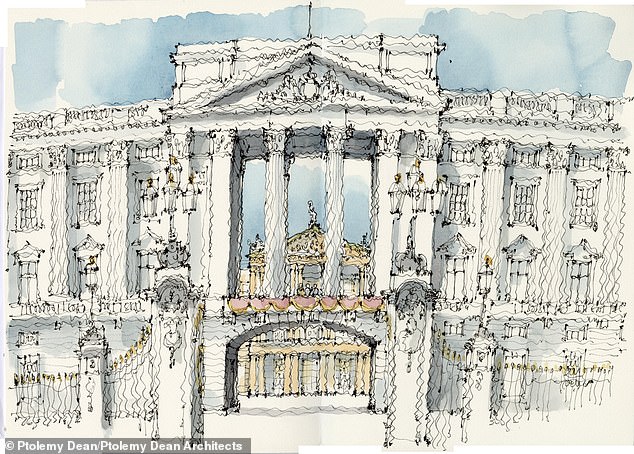 Ptolemy Dean creates a palatial bridge, opening up the quadrangle behind 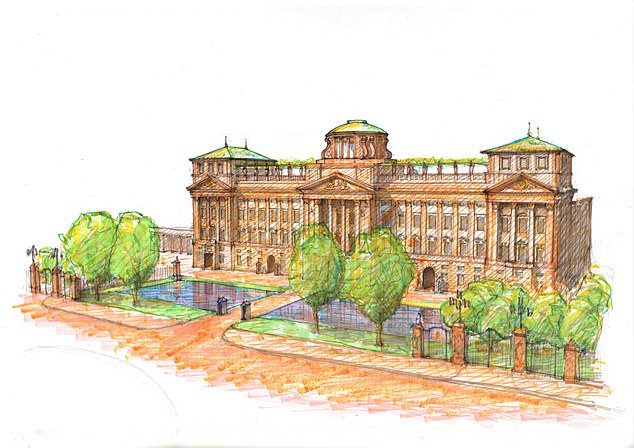 Mark Hoare replaces railings with a moat and plenty of fruit trees. He also adds gilding and rooftop pavilions 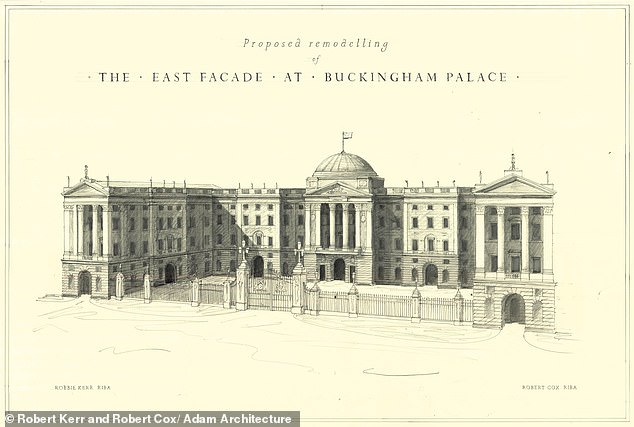 Ross Sharpe adds trees along a lowered front. He told Country Life this new look ‘has a more interesting rhythm and approachability… London skylines are a wonder and here is an attempt to add picturesqueness’

Although the architectural profession can be famously sniffy about such landmarks, no one — thankfully — has proposed bulldozing the thing and starting afresh.

One proposal, by Ptolemy Dean (whose job includes looking after Westminster Abbey), simply involves removing the central section of the East Front.

This would turn the famous balcony into a bridge. That way, the public would be able to view the less well-known quadrangle within. 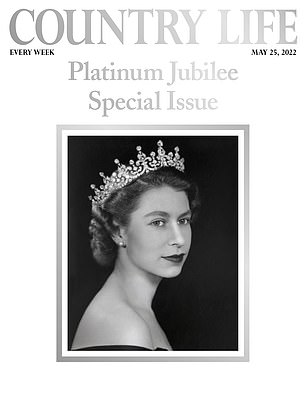 Robert Kerr and Robert Cox, of Adam Architecture, on the other hand, advocate a major expansion with new wings stretching forth from the existing East Front to the public railings, an extra storey and a giant dome in the middle.

This, they argue, would give Buckingham Palace ‘the aura, the grandeur and the confident splendour it deserves’. Perhaps, although it doesn’t seem to be lacking much of that as things stand.

Ross Sharpe of Yiangou suggests a line of trees along a lowered front, plus ‘statues of worthy figures that no generation can deny’. Good luck with that list.

Mark Hoare, of Hoare Ridge & Morris, does away with the railings, replacing them with a moat and plenty of fruit trees. Up above, he adds lots of gilding and rooftop pavilions linked to a central dome on the axis of the Mall.

Finally, Francis Terry wants to add domes at either end, trees in front and a vast winged statue on top.

It might be more eye-catching but, to my mind, it leaves the Palace looking more like a puffed-up French ministry of something than the seat of monarchy.

At least most of them agree on one thing. Whatever happens in the future, the Royal Family are virtually certain to end up standing on that balcony.