A vast mansion which was the biggest private residence in Britain could be as well-known as Chatsworth or Blenheim Palace in a few years time, according to the charitable trust which is working to restore it for the nation.

But the final bill to save Wentworth Woodhouse could hit £200 million.

It is a year since the huge country house, which is hidden in the South Yorkshire countryside just outside Rotherham, was bought by the Wentworth Woodhouse Preservation Trust for £7 million.

The mansion, which has 365 rooms, five miles of corridors and the longest facade of a country house in Europe, went up for sale in 2015 following the death of owner Clifford Newbold

This modest purchase price – the cost of a flat in parts of central London – is just the beginning of a mammoth investment needed by the trust as it works to reverse decades of decay.

Trust chief executive Sarah McLeod believes that the total bill could be between £150 and £200 million.

This is because the task she faces is epic.

Wentworth Woodhouse’s 606ft facade is wider than Buckingham Palace – a building it stood in for during the filming of Oscar-nominated movie Darkest Hour – and its floor area is about the same as the Grand Kremlin Palace in Moscow.

It is reputed to have 365 rooms, although no-one seems to know for sure as it has cupboards the size of an average family lounge.

Ms McLeod said: ‘Occasionally, I find a new room I’ve not found before.’

The current priority is to make the nearly four acres of roof watertight – a job which is being funded by £7.6 million earmarked by chancellor Philip Hammond in his 2016 budget.

Ms McLeod said the complete renovation could take more than 20 years but she is confident Wentworth Woodhouse will become a national landmark much sooner than that. 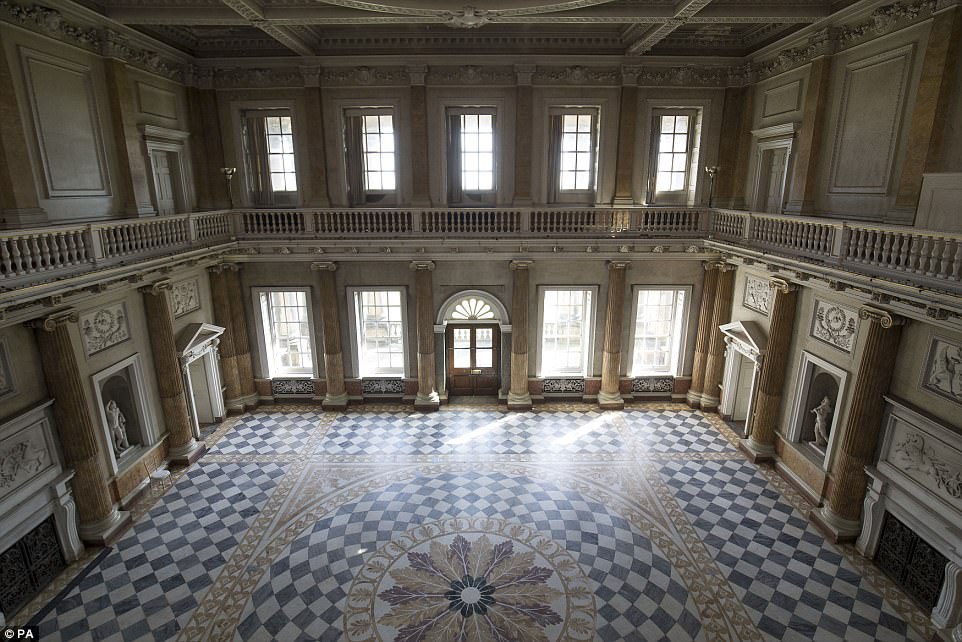 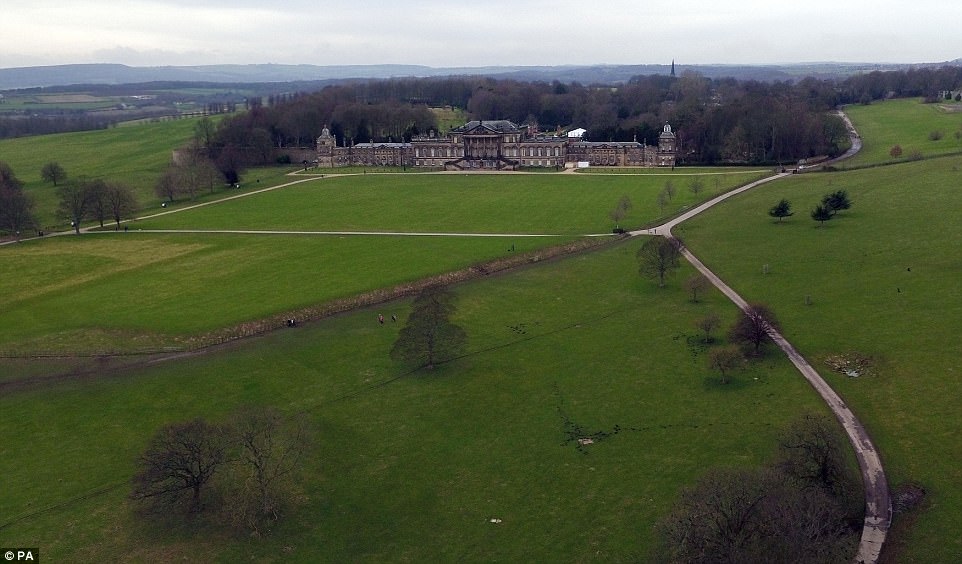 After the family moved out 40 years ago, the building was used as a teacher training college for a time before it moved into private ownership 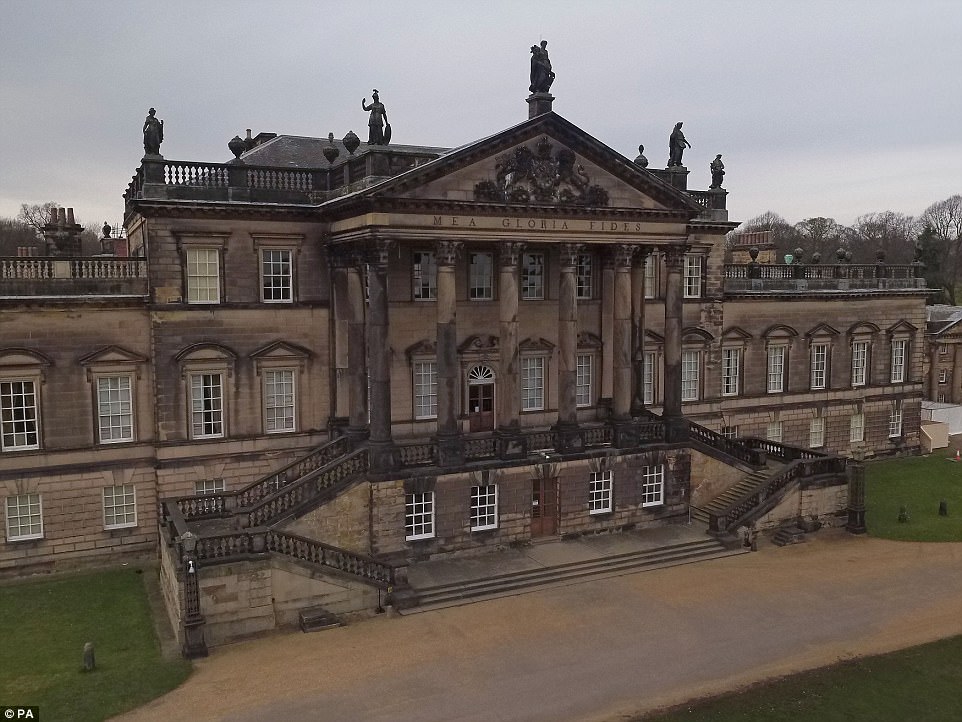 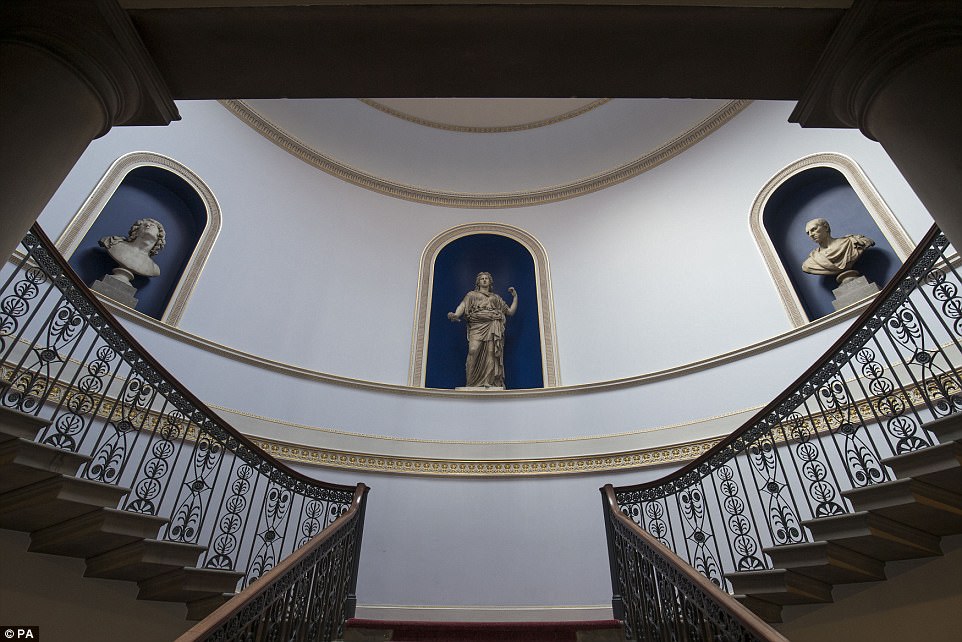 However, now the £200million restoration project seeks to return it to its former glory 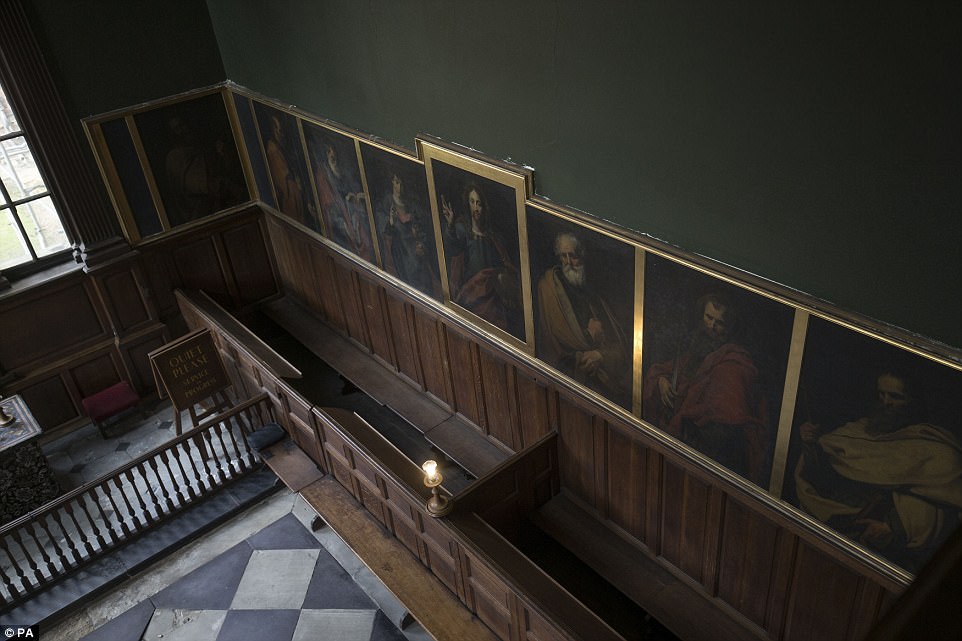 The property is the largest stately home in private hands, and even has a section dubbed ‘the village’ by the Newbold family who currently own it, because it takes so long to get to 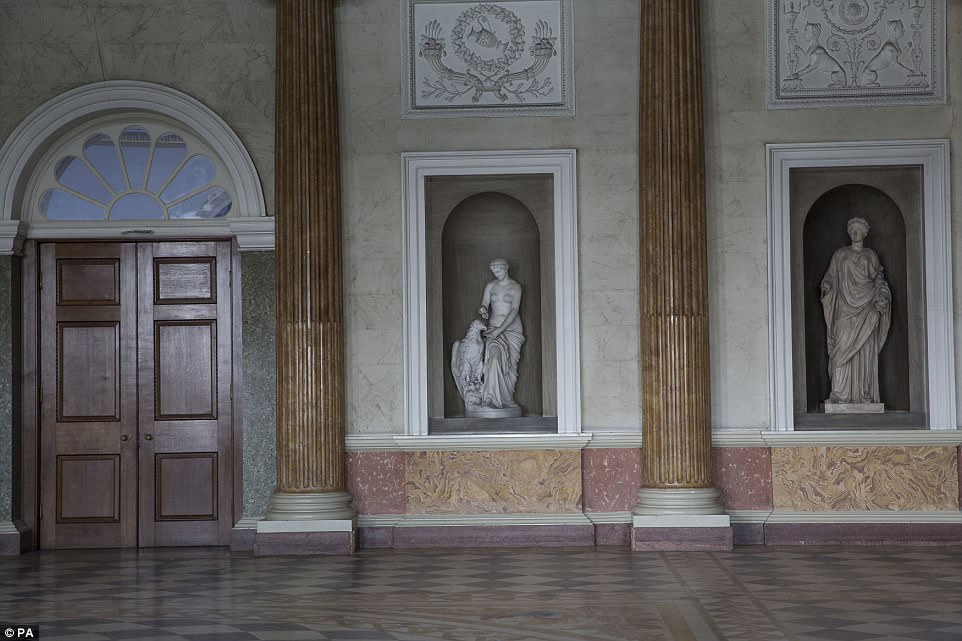 The home is suffering from subsidence after the fourth Earl Fitzwilliam established mines around the home. Work continued there until 30 years ago, and the owners say the work has damaged the property 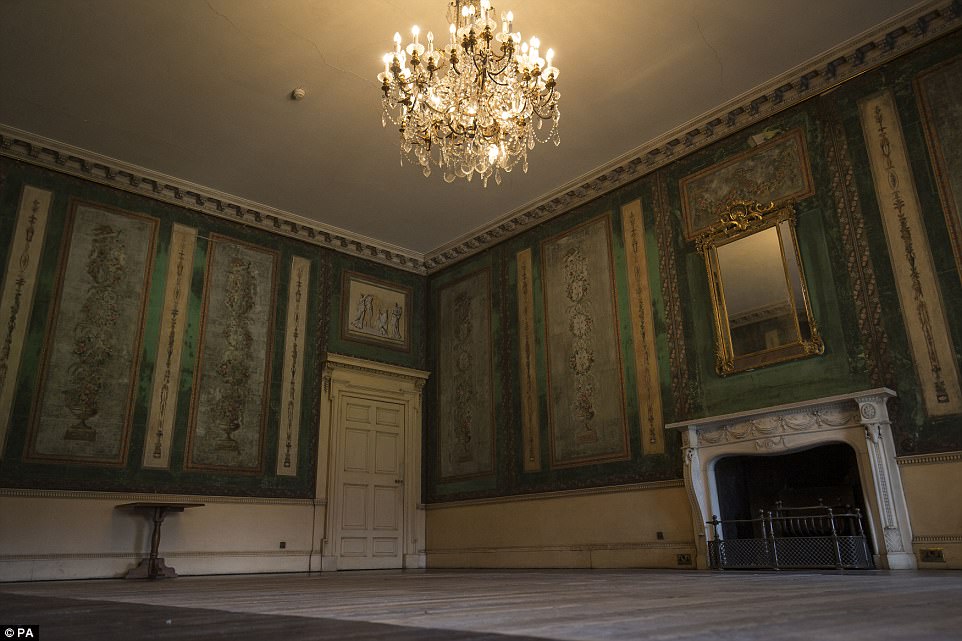 Up to date: In modern times the house has made a name for itself as the backdrop to various period dramas, and features as the Royal Academy in the film Mr Turner 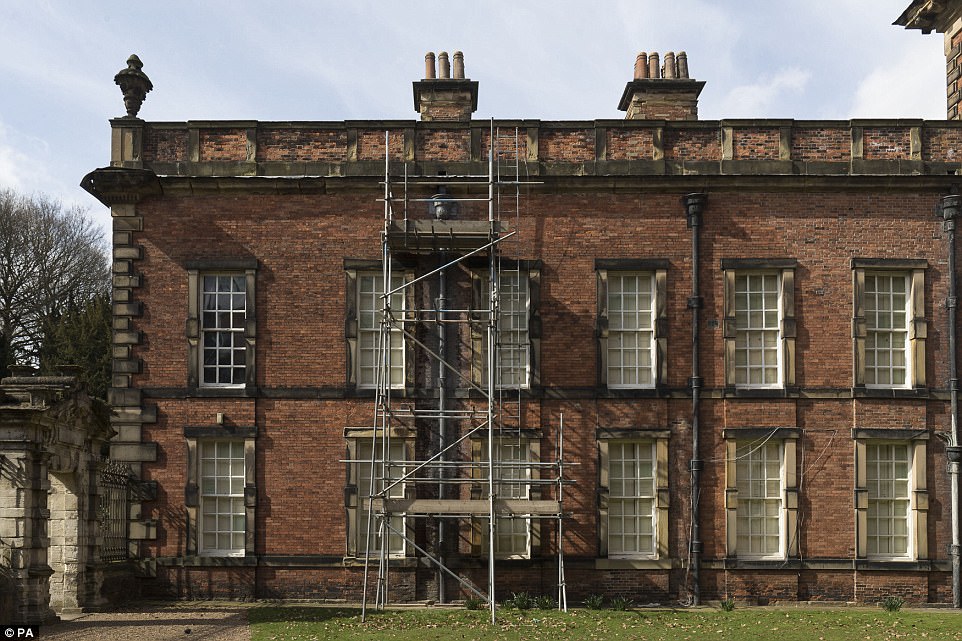 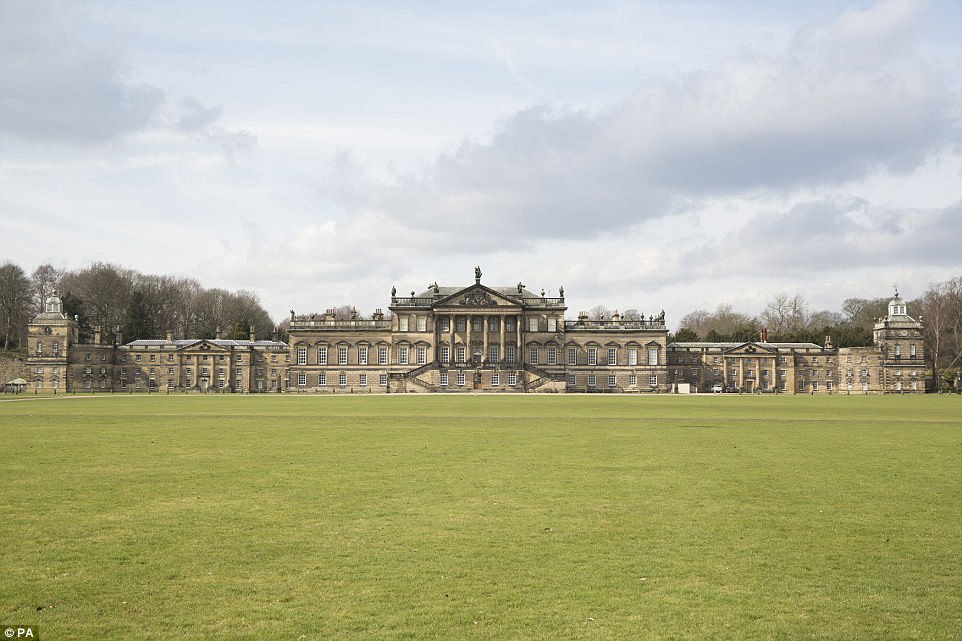 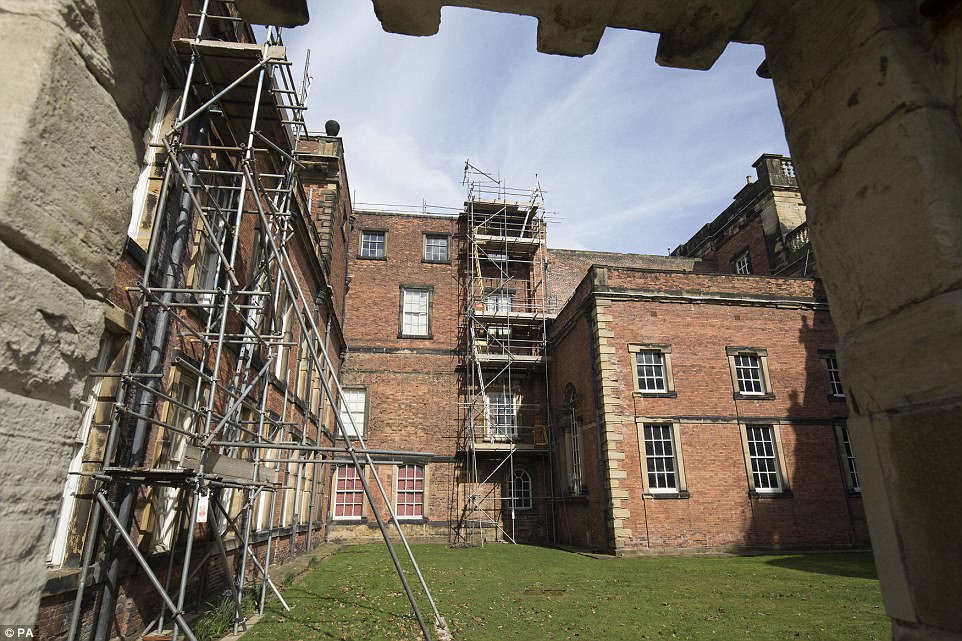 The structure is undergoing comprehensive exterior work, which will repair and replace vast swathes of brick

She said: ‘I don’t think it will take anything like 20 years for that to happen, I think that will happen much sooner.’

Ms McLeod said the trust was taking care not to blow Wentworth Woodhouse’s trumpet too early – especially as she currently has a staff of just 15, compared with the 1,000 people who ran the house and estate in its heyday.

She said: ‘We need to ensure, before hoards of people come and visit us, that we’re in a position to really look after them when they get here.

‘There’s a lot of groundwork going on behind the scenes. But I think, certainly over the next three to five years, we will see a huge change in both the trust itself and how the site is seen by the public.’

Ms McLeod said the masterplan for the house’s future was close to completion and will inevitably involve a mix of uses for Wentworth Woodhouse – almost certainly a visitor experience, definitely an event location and probably some of it will be converted into homes. 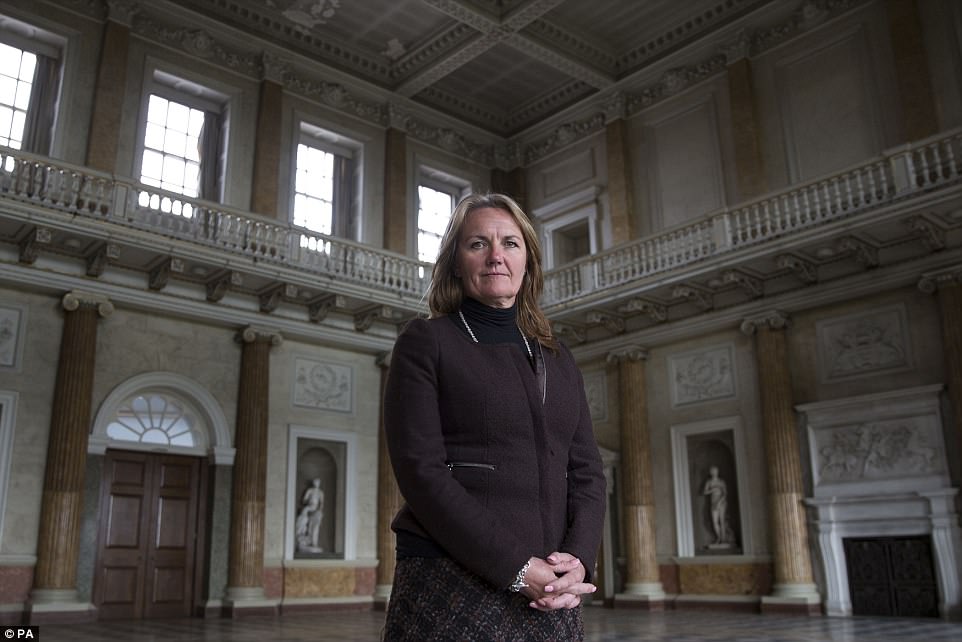 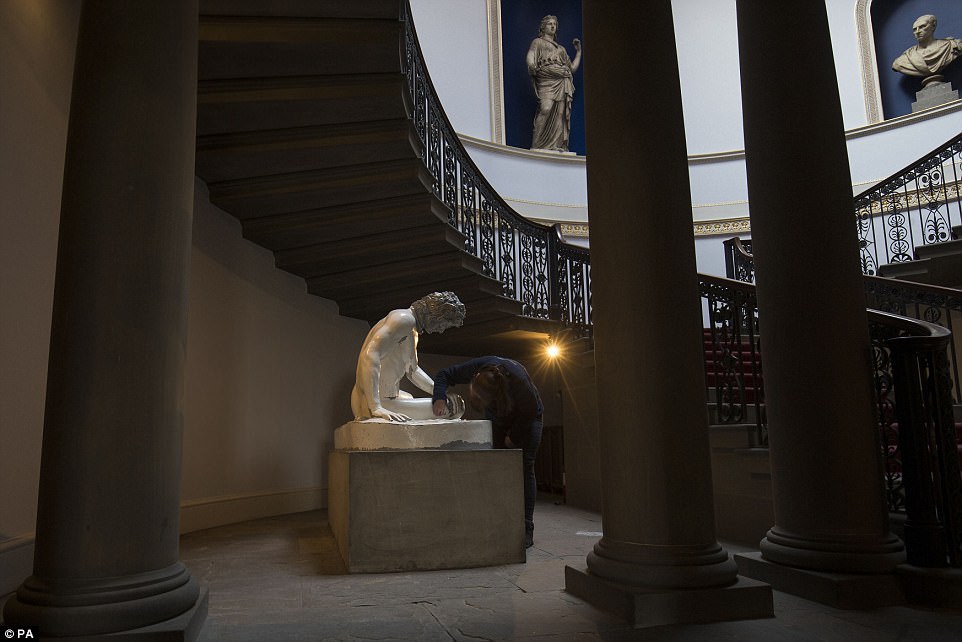 Original statues around the property have undergone restoration work 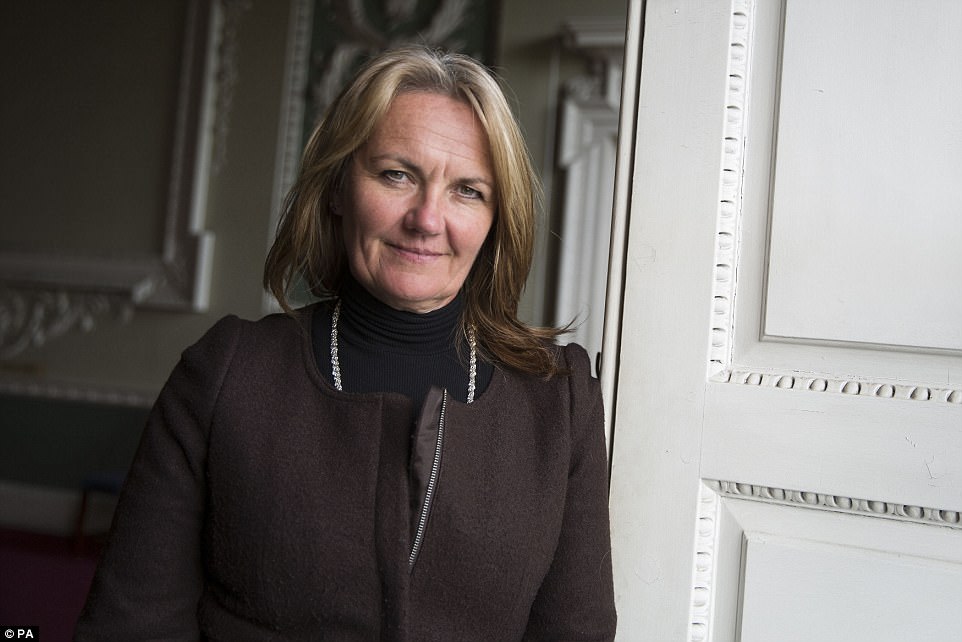 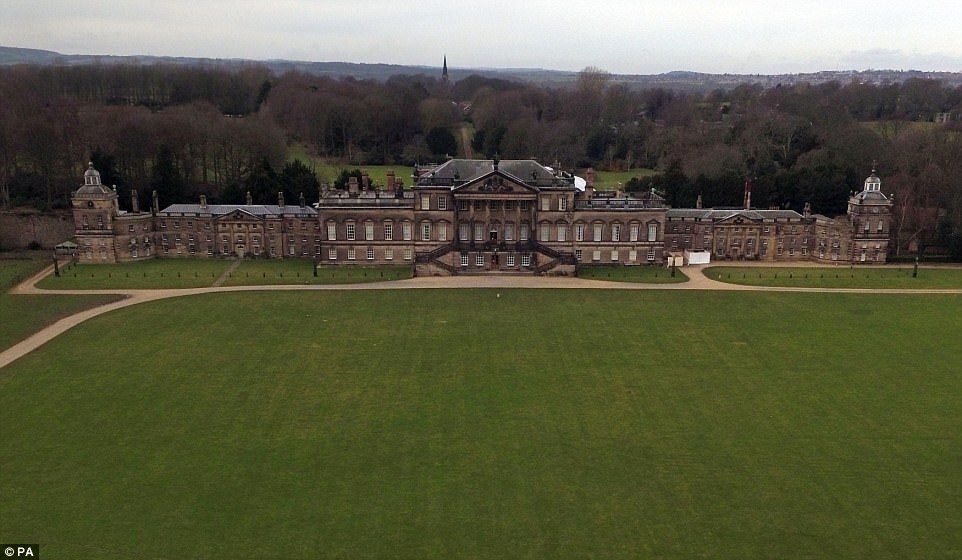 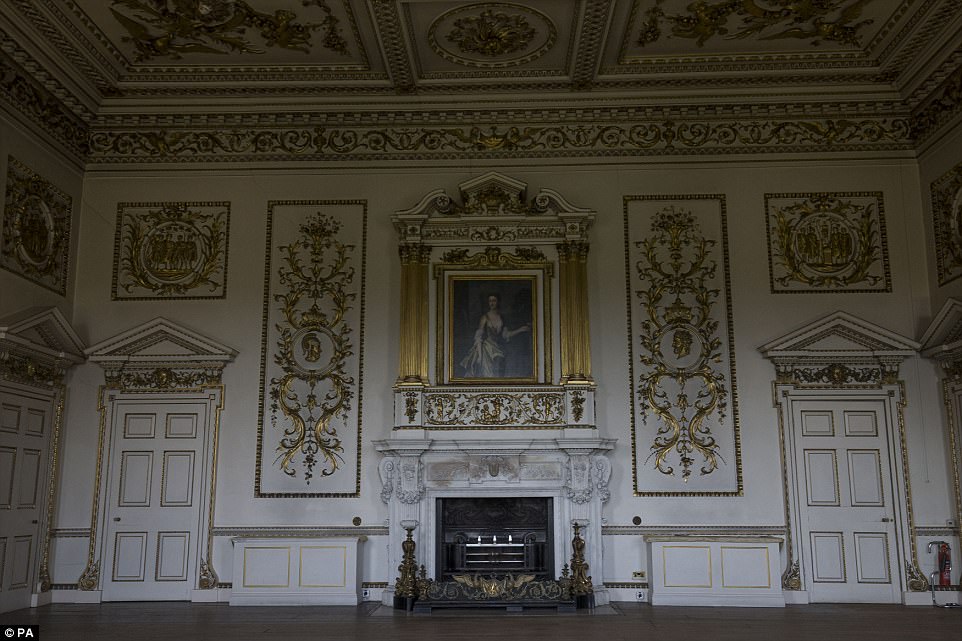 She said: ‘A big part of this process is consultation – talking to the community around us, talking to the people of South Yorkshire and finding out what they want for this site.

‘After all, this is not a privately owned house any more. This is now owned by a charitable trust which, by definition, means it’s owned by the nation for the benefit of the nation.’

Ms McLeod said people will soon be given the opportunity to write messages on the back of each of the 14,000 slates which will be laid on the roof of the state rooms and last for 200 to 300 years.

This kind of initiative will form part of the massive fund-raising push but the trust will look to public grants and substantial private donations to provide much of the truly huge sums involved.

She added: ‘How many people get to come to work in a Grade One listed mansion every day? It’s fantastic.’

Wentworth Woodhouse: One of the great mansions of Georgian England which slid into neglect and disrepair during the 20th century

The building is actually two grand houses, built back-to-back. The baroque West Front was built for the 1st Marquess of Rockingham from about 1725 but it is the slightly later, 606ft wide, Palladian East Front which is the behemoth.

In 1792 the estate was inherited by the 4th Earl Fitzwilliam, beginning a long relationship between this aristocratic family and the surrounding community.

One room was created to house Stubbs’s famous painting of the family’s racehorse, Whistlejacket. The work was sold to the National Gallery for £11 million in 1997.

The 60ft square Marble Saloon was called the finest Georgian room in England.

Princess Victoria stayed at Wentworth Woodhouse in 1835 and wrote that it was ‘an immense house’.

More than 1,000 people were employed by the house and estate in the mid 19th century, including a ‘rat catcher’ and ‘state bed maker’. 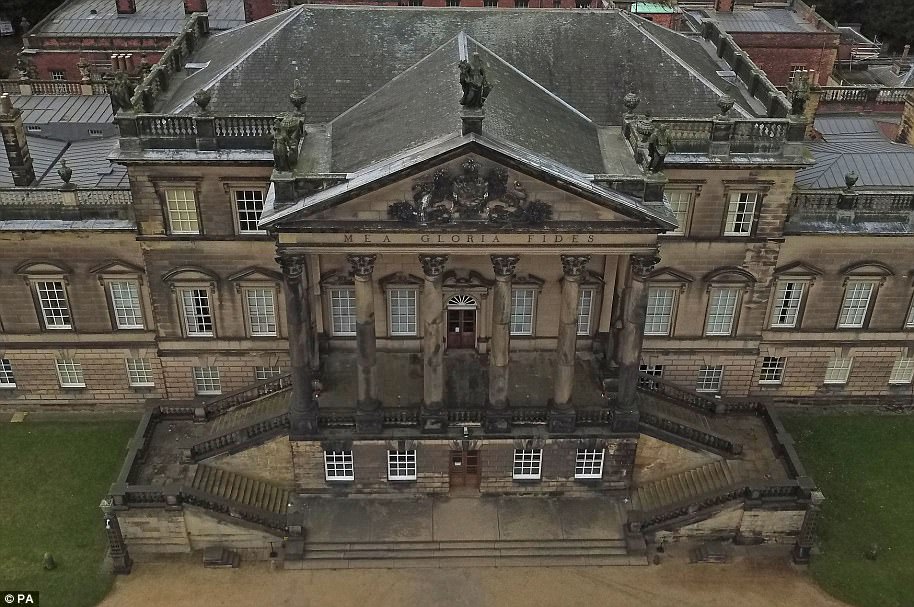 The house will almost certainly open with a visitor experience, an location and it is likely some of it will be converted into homes 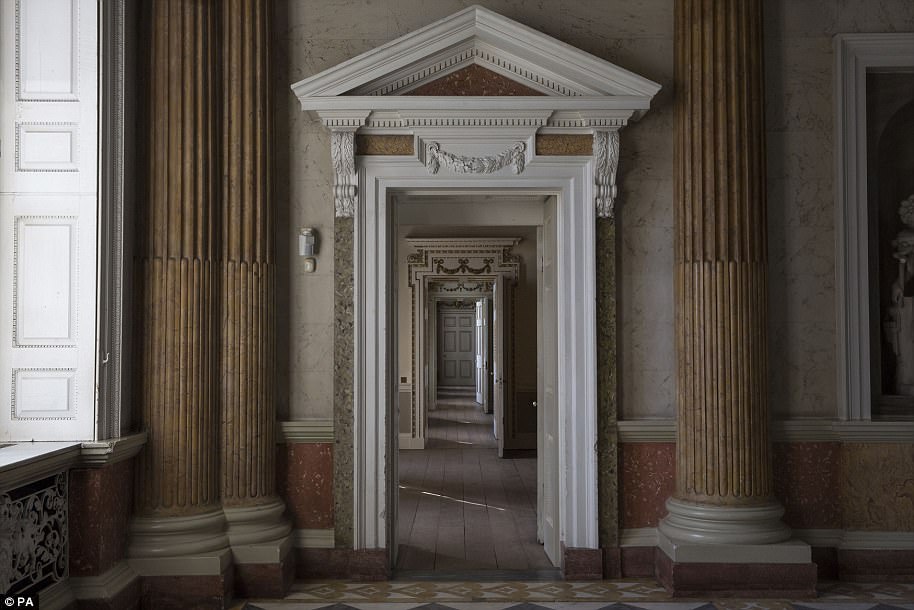 People will soon be given the opportunity to write messages on the back of each of the 14,000 slates which will be laid on the roof of the state rooms and last for 200 to 300 years 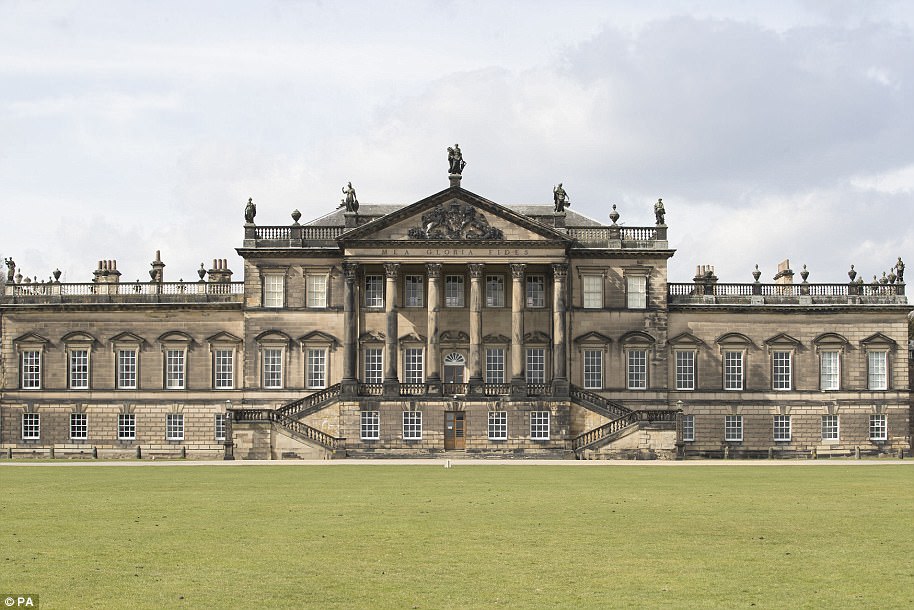 The site’s stable block is larger than the average house. Pictured: An exterior view of the property

When King George V stayed in 1912 he needed 76 bedrooms for his entourage.

After the Second World War, open-cast mining devastated the estate with workings coming almost to the door of the house. Many saw this as a vindictive act of class warfare by Labour minister of fuel and power, Manny Shinwell.

The 8th Earl Fitzwilliam died in a plane crash in 1948 along with Marchioness of Hartington, the younger sister of John F Kennedy. He left no male heir.

After the death of the 8th Earl the house began to decline. A sale of valuables at the time included 14 four-poster beds. It was later used as a teacher training college.

The Fitzwilliam family ended its connection with the house in 1979, with the death of the 10th and last Earl. The house and 83 acres were sold to a private buyer.

The sale did not include the deer park, the rest of the estate and the nearby Wentworth village, which were placed in a charitable trust. The estate, which features a range of listed follies including the 90ft high Rockingham Monument and 100ft high Hoober Stand, continues to be run by the Fitzwilliam Wentworth Amenity Trust.

In 1999 architectural historian John Martin Robinson wrote that ‘the failure of Wentworth Woodhouse to become a stately home open to the public after the Second World War and thus to have secured its future like Chatsworth or Woburn is an architectural tragedy’.

The house was bought by architect Clifford Newbold in 1999 who hoped a huge legal claim against the Coal Authority for mining damage would help him restore the house. But this failed.

The house was bought by the Wentworth Woodhouse Preservation Trust in 2017, partly funded by a £3.5 million grant from the National Heritage Memorial Fund.

As well as the vast mansion, the trust bought 83 acres of land immediately around it; the stable block, which is almost as large as the house; and a range of other buildings, including the huge, derelict Camelia House.

Wentworth Woodhouse is regularly used as a film location – appearing as Buckingham Palace in the recent hit movie Darkest Hour and also in the BBC drama Victoria.