Couple are among first to wed under new post-lockdown rules

A couple have become one of the first people to get married under the new post-lockdown coronavirus guidelines after the Prime Minister gave permission for weddings to recommence from Saturday.

David D’Arcy, 43, and his wife Hayley Collins, 41, from Liverpool, who were due to walk down the aisle on April 4, were finally able to tie the knot at St Anne’s Church in Aigburth at 10am today.

The newlyweds, who had to sanitise their hands as they entered the church and whose 27 guests had to abide by strict social distancing rules, were delighted to be able to celebrate their big day after months of uncertainty.

David D’Arcy, 43, and his wife Hayley Collins (pictured together at St Anne’s Church in Aigburth), 41, from Liverpool, were finally able to tie the knot today 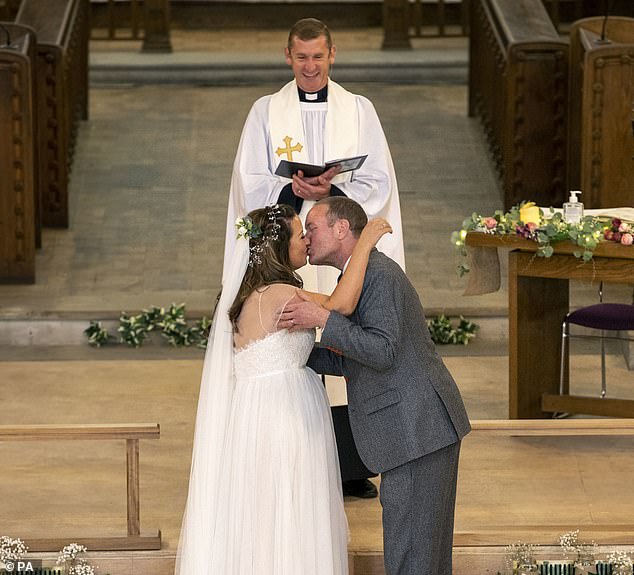 The couple, who were due to walk down the aisle in April 4, were finally able to tie the knot after the Prime Minister gave permission for weddings to recommence from Saturday

While many of the couple’s guests were unable to attend, including Mr D’Arcy’s parents who are in their 70s and live in Ireland, the pair were able to exchange their vows and enjoy their intimate wedding under the post-lockdown rules.

Prior to the big day Ms Collins, who teaches psychology, sociology and religious studies at St Hilda’s Church of England High Schoo, told The Guide Liverpool: ‘It’s not the wedding we’d spent months planning – we’ve organised this is just over a week – but we are delighted.

‘It’s a celebration of our love and it makes our family complete and that’s what really matters.’

The couple from Old Swan, Liverpool, who due to get married on April 4 with around 50 guests, had spent a long time organising their big day before the coronavirus pandemic put a halt to their plans.

Mr D’Arcy, a reefer co-ordinator for Sealand-Maersk, added: ‘We were very upset at the time, but as the virus took hold and we realised how bad it was, we accepted it had to be done, that the wedding had to be cancelled.’ 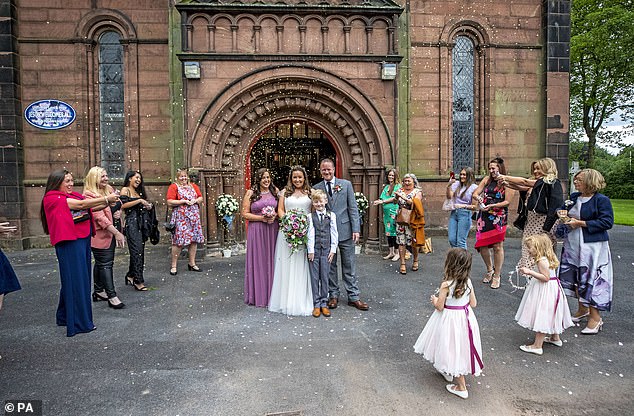 The couple, who share twin daughters Livia and Maya, four, and nine-year-old son Jonah, were finally able to celebrate their big day with their 27 guests 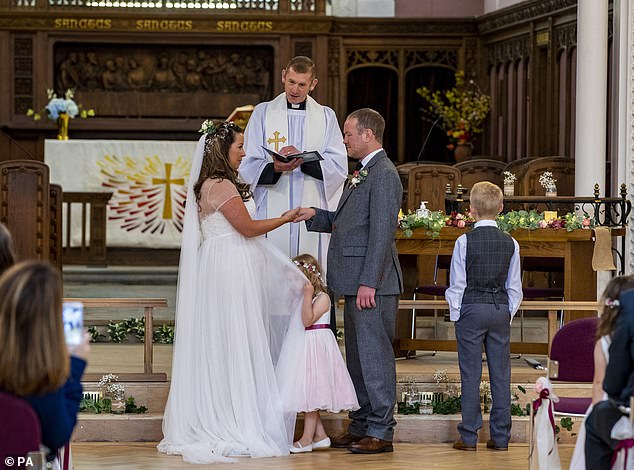 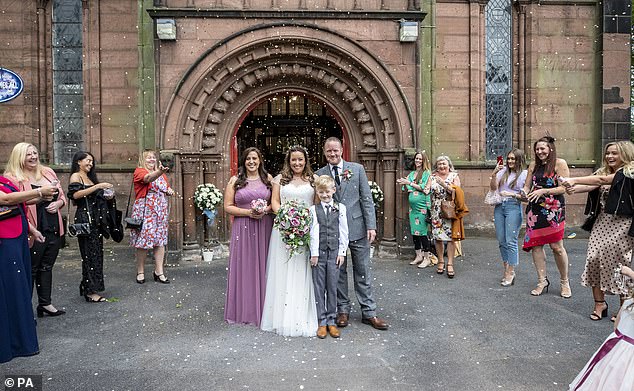 As the date of their original wedding day approached, the pair, who share twin daughters Livia and Maya, four, and nine-year-old son Jonah, decided to mark the day with a glass of champagne and by making Tik Tok videos with their children.

At a glance: What are the rules for weddings?

However after Boris Johnson last week gave permission for weddings to recommence as part of a widespread easing of lockdown restrictions, the couple scrambled to organise a last minute wedding in the space of a week.

The ceremony, which was conducted by Reverend Ian Greenwood, saw Ms Collins’ friend Liz Kaddour play Savage Garden’s Truly Madly Deeply on the guitar as the couple walked down the aisle.

While the couple chose not to wear masks, they and their guests had to sanitise their hands before entering the church and seats were also spaced apart.

The heartwarming scenes come just a day after Heather McLaren, 28, and Tom Hall, 29, from Leeds, became one of the first couples in the UK to exchange their vows since the lockdown restrictions.

The pair, who were set to get married at Greyfriars Kirk in Edinburgh with 120 guests, were forced to cancel their plans after the government’s restrictions came in force.

However on Saturday, the couple were finally able to celebrate their union at St George’s Church in Leeds, surrounded by their closest family and friends.

Speaking together from their Leeds home the couple told The Mail on Sunday: ‘It wasn’t what we had planned but it was completely unique and really special. I know everyone’s wedding day is memorable but this one feels particularly memorable.’

Ms McClaren added: ‘Ten days ago, we didn’t think this would be possible. But everyone at the church has been so wonderful.

‘They deep cleaned the church and set up a webcam so other friends and family could watch from home.’

The ceremony was pared back and singing was not allowed. Guests were also made to sanitise their hands at the church entrance.

Under the new post-lockdown rules, which came in force on Saturday, fathers cannot walk their daughter’s arm-in-arm down the aisle and couples must wash their hands before and after exchanging rings. 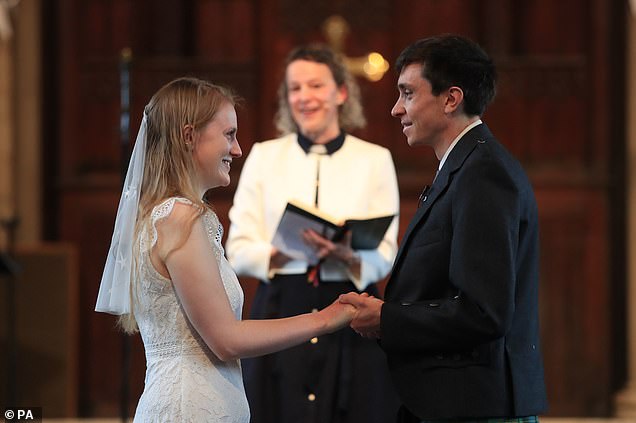 On Saturday Heather McLaren, 28, and Tom Hall, 29, from Leeds, were able to tie the knot at St George’s Church in Leeds 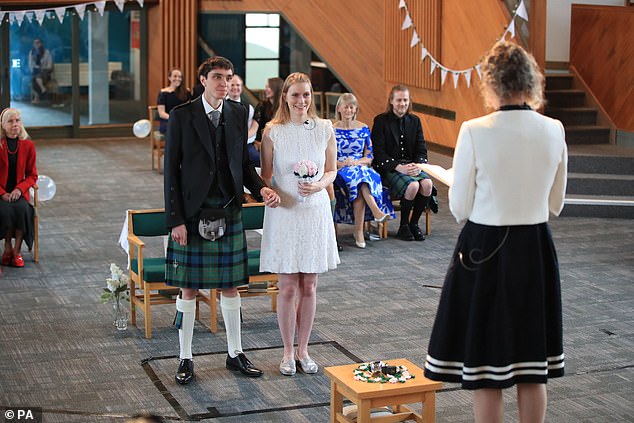 The couple, who were due to get married at Greyfriars Kirk in Edinburgh, finally exchanged their vows on Saturday

The new guidelines also state that up to 30 people are allowed at the ceremony, including the couple, witnesses, officiants and guests, and staff not employed by the venue

No food or drink is allowed to be consumed ‘unless required for the purposes of solemnisation’ and spoken responses should ‘not be in a raised voice’.

Church bells will peal again for the first time in three months from this Sunday after the Church of England agreed new social distancing rules when services resume this weekend.

Bellringers will wear masks, stand at least one metre apart and perform for no longer than 15 minutes at a time – but they will not have to wear gloves because the ropes may become too slippery.

England’s 5,000 churches have only been open for a few weeks for private prayer and were shut completely after Boris Johnson imposed lockdown in March. Some have criticised church leaders for failing to push to open earlier to better support the communities they serve during Britain’s worst health crisis for a generation. 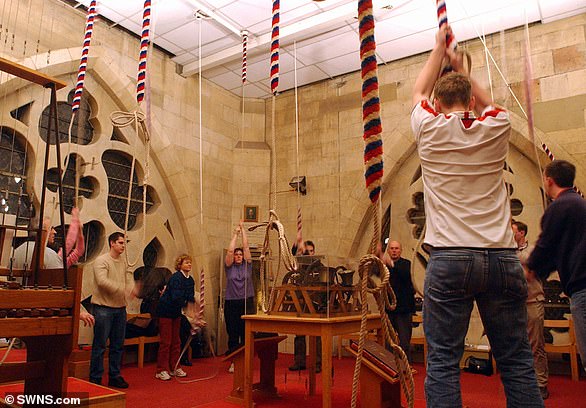 From Sunday communion will be limited to the bread, the sharing of the Peace will not be allowed while hymns ‘are not advised’ and communal bibles must be put away.

But in happier news, according to the Central Council of Bell Ringers, ringing will be included in the resumption of church services to remind people Sunday is the ‘Lord’s Day’.

A meeting with the Church of England’s Recovery Group confirmed that senior clergy are 100 per cent committed to making ringing part of the return of church activities but ringers have been told that initially they must not ‘practice or self-indulge.’

Spokesman for the Central Council Vicki Chapman said ‘ The CoE has stated that it would be really good to get ringing going again, letting the bells proclaim that the church is open and wanted.

‘We are particularly cautious of any misinterpretation of the drop in the UK Government’s social distancing rule from 2 metre to 1 metre `which represents a ten-fold increase in risk.

‘Our return to ringing will be cautious, socially distanced ringing, for a very limited period of 15 minutes, and only for services.

‘Ringing three or four bells for 15 minutes for a service is not what keeps most of us ringing and the novelty is going to wear off quite soon. It could also be a long time before peals are possible and we won’t be able to do any teaching.

‘But it is essential for us getting ringing going again. The church values our contribution and we have managed to get them to include us in their plans. But if we do not get bells ringing for Sunday service in this early phase of resumption, it will slow down the full opening up.

‘Dates are still to be finalised but some Dioceses have already said they expect to have church services running after July 4.’