A family have revealed how they are raising their children through gender-neutral parenting in the hope that their son and daughter will never see their sex as a ‘hindrance or excuse’.

The Glorioso-Mays family from Odenton, Maryland, have shunned defining their children by gender stereotypes with their son Hadden, five, and daughter Adelaide, one.

Photos see Hadden with bows in his hair and wearing a tutu and their daughter, Adelaide dressed up as a firefighter and wearing matching outfits with her brother.

For mother Callie, 30, and her military husband Caleb, 29, gender neutral parenting is all about raising boys and girls in the same way, they don’t divide colours or toys between the two sexes.

‘But gender refers to social constructs of masculinity or femininity, which varies by culture and changes throughout time.

‘There was a time when girls wearing trousers was considered indecent. That’s changed. So who says more shouldn’t change as well.

‘The way we practice gender-neutral parenting is based in the idea that boys and girls should be raised the same way. Instead of dividing things like colours and toys between the sexes we give each child the freedom and encouragement to discover what they like. 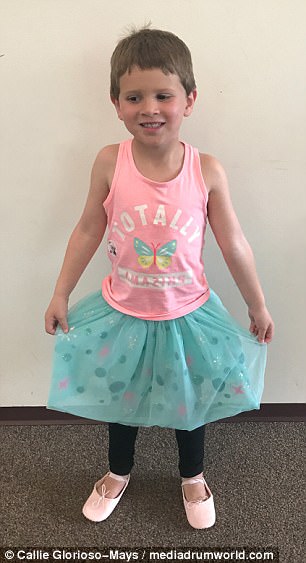 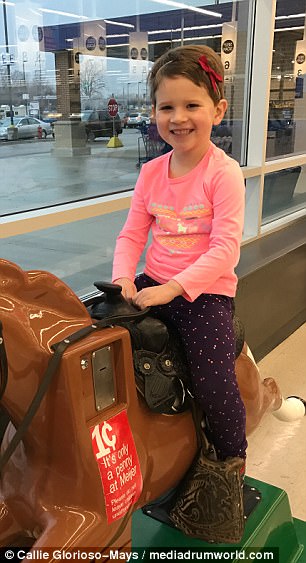 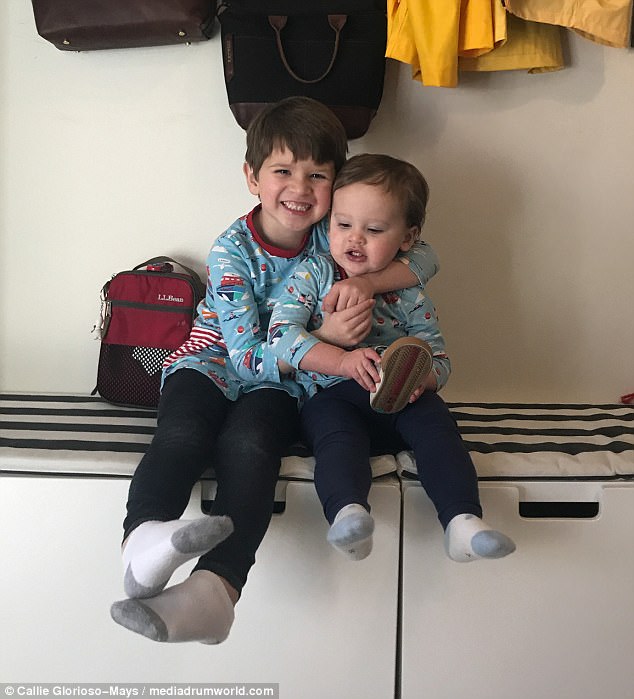 ‘From the time they were born we’ve avoided highly gendered clothing and toys. We shop for both of them out of ‘girls’ and ‘boys’ clothing departments and, while most toys are shared, our son was gifted baby dolls and our daughter her own dump truck.’

Their parenting style isn’t limited to the toys their children play with or the clothes that they wear.

Callie continued: ‘On a bigger scale we tried to avoid gendered language or assumptions. Phrases like ‘boys will be boys’ or ‘she’s a drama queen’ play into negative stereotypes about each sex so I really rail against those.

‘We talk a lot about how boys and girls can do all the same things: boys can wear hair bows, girls love playing with airplanes, everybody likes to run and play at the park. We also intentionally expose them to books or people who are acting outside gender norms. 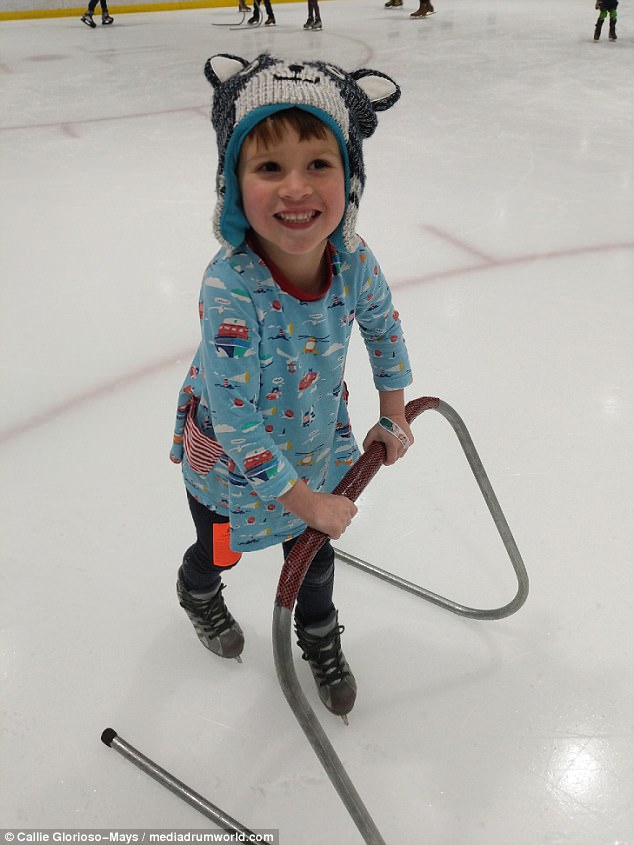 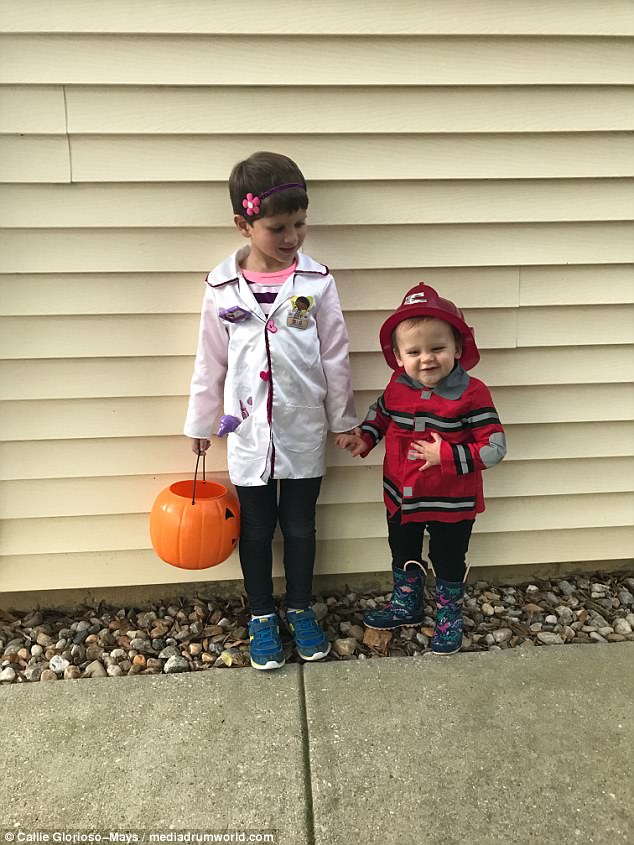 ‘From the time that they’re born we’re telling children that there’s a huge difference between men and women. Kids pick up on these subtle things and it informs their idea of what is acceptable for them.

‘If girls are given only dolls and play houses, they’re learning that that’s their appropriate realm.

‘Our goal is that our children grow up to see men and women as equals and value them as individuals, instead of judging them on how well they fit into societal norms.

‘We hope that our children will never see their sex as a hindrance or an excuse, but as just one aspect of who they are.’

Callie and Caleb say that they aren’t parenting in this way to be controversial or to show off, they just think that both of their children should be given the same opportunities and encouragement in life. 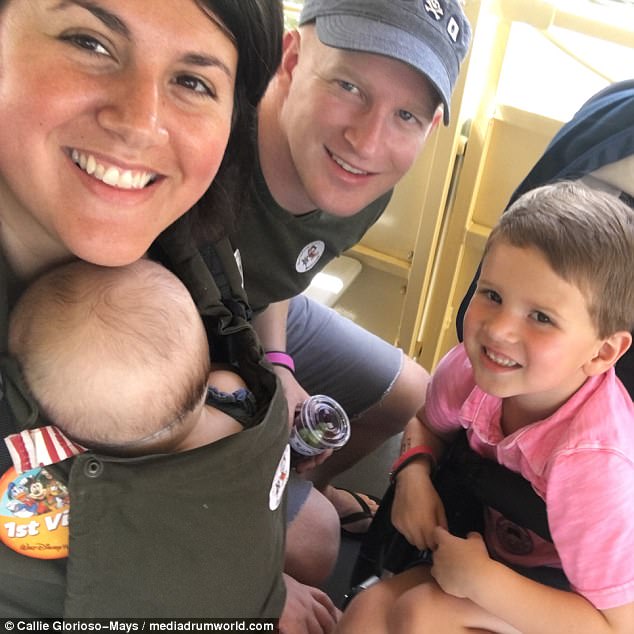 Callie explained the benefits of gender neutral parenting and discussed the reaction her family receives from the public.

She continued: ‘Children will be more well-rounded and confident. Hopefully they’ll be in touch with their emotions, something we see as traditionally feminine, and their physicality, seen as traditionally masculine.

‘And they’ll have more generous views of themselves and other people instead of viewing everyone through a strict gender binary.

‘On a larger scale raising gender neutral children will diversify fields that are currently highly gendered which results in stronger communities, organisations and countries.

‘The traditional view on gender is a binary: male or female. No variance. But I think society is becoming more comfortable with the truth that it’s not so black and white.

‘I hope my children will have the freedom become their whole selves and also that they will extend that freedom to everyone they meet as well.’

Callie says that she has been able to connect with other parents who have the same approach over social media.

She added: ‘I have a very small Instagram following and have connected with many like-minded parents so I’ve always had wonderful feedback on that medium.

‘In general the ‘negative’ feedback from friends and family members has more often come from a place of confusion than of true disagreement. It’s hard for people to understand why we let our son wear a hair bow, for instance.’