He gave her a ring! Couple are set to marry two years after they started texting on WhatsApp when she kept getting random messages because phone company gave him her old number

A couple are getting married two years after a phone number mix-up brought them together.

Jade Scott, 30, from Maidstone, Kent, started receiving messages on her phone from people she didn’t know.

The mother-of-one had changed her phone number and later realised someone else was using her old digits.

Jade Scott, 30, from Maidstone, Kent, and Matthew Perren, 32, met after a phone number mix up led them to messaging each other

To resolve the issue, Jade messaged the person using her old number and began talking to Matthew Perren, a 32-year-old bus shunter.

Five days later the pair met at Costa Coffee, in Chingford, north London, after messaging about everything from the moon to their favourite film.

‘It is fate that I switched my number and he went into a shop and got it a week later,’ Jade told The Sunday Mirror. 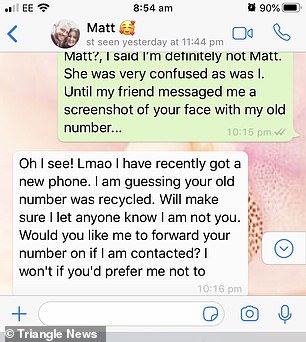 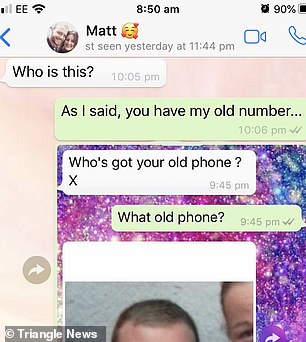 The first few messages between Jade and Scott explaining Jade’s old number had been recycled (left). The phone number mix-up led to confusion with friends and family (right)

She added how she never believed in fate before but feels the pair have been brought together for a reason.

The happy couple were brought together in May 2018 when Jade started receiving Snapchat messages meant for Matthew as her old number was registered on the app.

Matthew said: ‘After all these weird messages getting crossed over I was very intrigued to get to know Jade more. 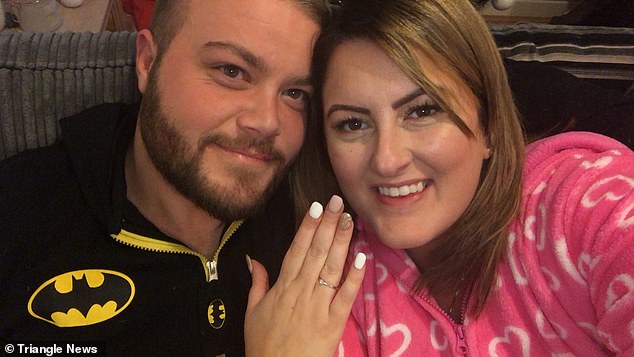 ‘It was her sense of humour that grabbed my attention, so I asked her to meet me for a coffee so I could see if she could keep up with my banter in person.’

Matthew describes how he started to laugh at Jade’s wave but the pair ended up chatting for five hours.

Jade’s mother said she was ‘dubious’ when the couple met because of the unusual circumstances.

Matthew proposed to Jade on Christmas Day and the ring was chosen by Jade’s daughter Elise with the wedding planned for 2022.

Jade described how ‘little signs’ keep appearing which proves they are soulmates.

She said: ‘Michael Buble’s Everything is both of our favourite songs and everywhere we go, it is always playing.’