‘I still have nightmares about the way they treated me’: Fijian woman gives emotional statement as Tongan couple who kept her as a slave for eight years and worked her around the clock for just $125 a fortnight are jailed

A couple have been sent to prison for callously exploiting a Fijian woman after trafficking her into the country and forcing her to work for them.

The woman, who cannot be named for legal reasons, was treated so badly her freedom had been taken and her human rights were ‘seriously compromised’, according to a judge.

She was trafficked into the country on a tourist visa by Brisbane mother Malavine Pulini, 48, to work for her and her husband Isikeli in 2008.

Malavine Pulini, 48, (right) and Isikeli Pulini, 60, (left) were sentenced to six and five years prison for forcing a woman to work as a maid for eight years

In a victim impact statement, the Fijian woman wrote how she was wracked by hopelessness, regret and low self-esteem.

‘I still experience nightmares about the way they treated me,’ she said.

‘They abused my trust and knew what they were doing was wrong.

‘I often ask, “why me?” What have I done to deserve this treatment?’

The couple gave her a bogus promise of being able to get her a longer visa.

But when she arrived in the country, the couple took her passport from her and forced her to work as a nanny, maid and cook until her escape in 2016.

She was paid about $250 per fortnight, but there were periods where she had to stretch that amount to last up to seven weeks.

Last week a jury found the pair guilty of forced labour offences and they pleaded guilty to harbouring an illegal non citizen in the Brisbane District Court.

Mrs Pulini was convicted of an additional human trafficking offence.

On Tuesday Judge Leanne Clare was scathing in her judgement as she sentenced them to prison with a non parole period of two years. 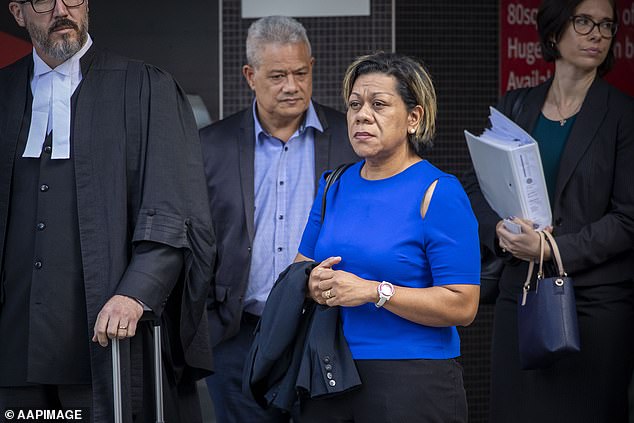 Malavine Pulini, 48, was convicted of an additional human trafficking offence after she lured the woman to Australia before taking her passport

Judge Clare said the pair tried to enhance the quality of their own lives by oppressing another person.

She said the pair had shown no remorse for the years they restricted the woman’s life.

While the public gallery featured a number of supporters for the Pulini couple, Judge Clare said it was difficult to reconcile the presentation they made to their friends in the church and their neighbourhood with the way they treated the woman.

Earlier in the hearing the court was read a victim impact statement from the woman who said she felt ‘helpless’ and ‘treated like a slave’ as she toiled on call and around the clock for them for eight years.