Couple convicted of luring daughter to Bangladesh for marriage

A couple who lured their 19-year-old daughter to Bangladesh to try to make her wed and have a baby with her first cousin have been found guilty of forced marriage offences.

Leeds Crown Court heard the woman, who cannot be named for legal reasons, was seen ‘running and screaming’ away from her relatives during a successful rescue attempt after the British consulate received a ‘threat to life’ report.

She had previously told the jury she endured ‘physical abuse’ and was left ‘almost suicidal’ by the incident, which came about after she was told she was going on a family holiday.

After rejecting the marriage, the teenager said her father even threatened to ‘chop her up in 18 seconds’ if she did not comply.

The victim had managed to contact her boyfriend in the UK while in Bangladesh, who was able to get in touch with authorities. Her younger sister also helped her contact the consulate.

Today a jury of 11 men and one woman convicted the girl’s parents of forced marriage and they will be sentenced on June 18.

Two parents have been found guilty at Leeds Crown Court, pictured, of luring their 19-year-old daughter to Bangladesh for a forced marriage

Leeds Crown Court heard the victim, from Yorkshire, was taken out of her school during term time for what she was told was a family holiday to Bangladesh.

A jury heard her family arrived in Bangladesh – where forced marriages are illegal – on July 3, 2016 and a date was set for the wedding on July 21.

Jurors heard that the girl’s parents had told her they were going on a six-week holiday to Bangladesh to visit relatives and celebrate Eid.

However, just days after arriving on July 3 2016, she was told by her father that he had found a husband for her.

‘He said “I have planned this for years, the guy is really suitable, I’ve given him money for university, and he’s a really attractive guy for round here”,’ the victim told the court.

‘He was trying to get me to say yes, but at no point did I say yes. I thought it was disgusting because it was my first cousin and stood my ground.’

The teenager, from Leeds, was supposedly told she would ‘live like a queen’ and that rejecting the proposal would ‘bring shame’ on her parents.

She said: ‘As the days went by, verbal abuse turned to physical abuse and my dad hit me over the head one day. It was so bad that the whole room literally went black.’

She also said her mother had pressured her father into hitting her again, based on the belief it would stop her ‘rebelling’ against the marriage.

The teenager, who was studying for her A-levels at the time, had told her mother that, even if she was forced to marry, she would file a report to authorities saying what had happened.

‘But my mum said there was no way that that would happen, because they were going to leave me there for a year so that I would get pregnant so that he (the first cousin) could get a visa,’ she told the jury during the trial.

She was rescued days before the wedding by local police, who put her in a car and then set up a roadblock to stop her family pursuing her.

Speaking during the trial, prosecutor Michelle Colborne QC told the jury less than one week after arriving in the country, she was told of the marriage plans.

She said: ‘So very, very quickly this was going to take place. She was stunned and she refused.

‘He told her that [the man] had been chosen for her, that he was suitable and talked of the plan.

‘When she refused, she sought out the support of the other defendant, her mother, who made it clear that this was a shared plan for her future.

‘Her mother swore at her, reminded her that no was not an option and that if necessary there would be violence against her.

‘She was later to encourage her husband to strike her. At no point did she agree to the proposal and very quickly an impasse developed between them.’

The court heard that once their daughter refused, her parents took her phone from her and after initially trying ‘to be kind and persuasive’, her father soon resorted to threats.

Ms Colborne said: ‘He would ask her for instance if she’d changed her mind yet and threatened to slit her throat if she didn’t comply. She stopped eating and was deeply distressed. 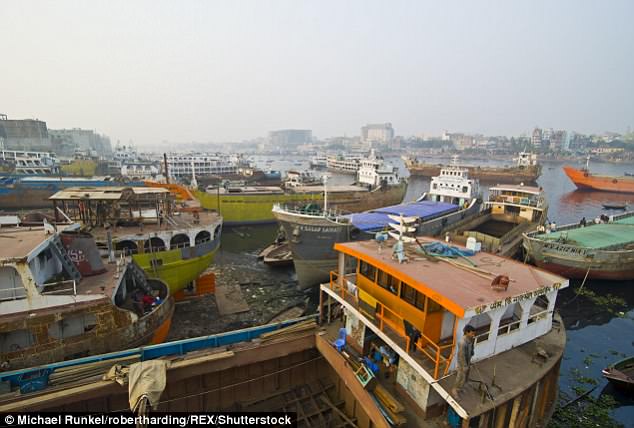 The woman was told she was going on a family holiday to Bangladesh only to be told she had to marry her cousin after arriving. Pictured is Bangladeshi capital Dhaka in a file photo

‘He made reference to the fact that he’d brought her up for 18 years with love, but that he’d chop her up in 18 seconds if she disrespected him.’

The court was told that the woman was eventually rescued by authorities, after secretly contacting her boyfriend in the UK.

Giving evidence in the first day of the trial, he told the court how the pair had planned a future together.

He said: ‘I thought they were going to Bangladesh to visit family. As far as I was concerned, they were just going to see family because they had not been for such a long time.’

Both of her parents were charged with forcing marriage using violence or coercion and looked emotionless as the verdicts were read out.

The verdict came less than a week after a woman was jailed for four-and-a-half years at Birmingham Crown Court after forcing her daughter to marry in Pakistan, in the first successful prosecution of its type.

Praising the victim’s bravery, Michael Quinn, from the CPS, said: ‘She showed courage in contacting the authorities for help, and provided valuable assistance with the investigation and prosecution of these offences.

‘This successful prosecution sends a clear message that forced marriage is a very serious crime and those responsible will be prosecuted.’

The statement added that the British High Commission in Bangladesh, the Forced Marriage Unit and Bangladeshi police all worked together to bring the victim back to the UK.