A couple travelling on a Grand Canyon tour was found stabbed to death in their Las Vegas hotel room.

The man and woman never showed up to join their tour group from Los Angeles on Friday, causing police to conduct a welfare check at their Circus Circus hotel room.

Inside their bodies were found with multiple stab wounds around 4pm.

Las Vegas police have opened a homicide investigation into the double stabbing as detectives ‘lean towards’ the possibility of a murder-suicide.

One person reported hearing an argument from the hotel room around 2am, but it wasn’t clear who was involved, according to the Las Vegas Review-Journal.

The couple was a part of a tour group from Los Angeles that arrived to Las Vegas about two days ago, police say.

As of Friday evening the Metropolitan Police Department was awaiting the coroner’s help in the investigation.

‘That would tell us at that point if we are working with a murder-suicide or if there is a suspect outstanding,’ Metropolitan Police Department Lt. Ray Spencer said.

The Clark County coroner’s office will release the identities of the couple after their family is notified. 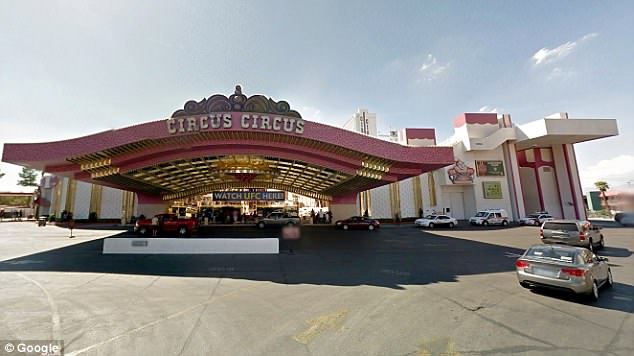 Alarm was raised after they failed to show up to their Grand Canyon tour group on Friday, police conducted a welfare check and found their bodies with stab wounds around 4pm

Police call it an ‘isolated incident’ and have no suspects, according to Fox5.

The hotel is located on the north end of the famous Las Vegas strip.

MGM Resorts International, the owner of Circus Circus, released a statement in light of the incident.

‘Las Vegas Metropolitan Police is on scene and we are cooperating with their investigation. LVMPD has indicated that there is no known threat to guest safety at this time,’ spokesperson Brian Ahern with MGM Resorts said in an email to Fox.

The hotel is still open and running as police closed about half a floor within the building for the investigation.