A man charged in the death of a pregnant woman told police he came home to find his girlfriend cleaning up blood in their bathroom before she presented him with a newborn girl.

The body of 22-year-old Savanna Greywind was found wrapped in plastic and duct tape in the Red River near Fargo in North Dakota on Sunday.

Greywind was eight months pregnant when she went missing on August 19 after going to visit her neighbor Brooke Lynn Crews.

Crews, 38, and her boyfriend William Hoehn, 32, were both charged over her death on Monday after the body was found.

The body of Savanna Greywind, 22, was found wrapped in plastic in the Red River near Fargo on Sunday. She was eight months pregnant when she went missing on August 19 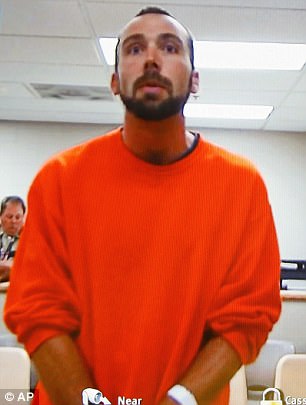 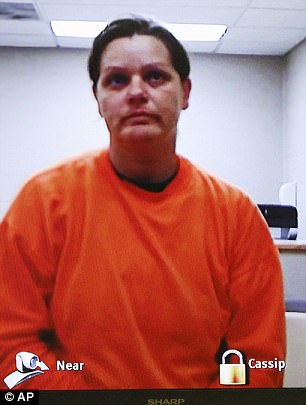 Brooke Lynn Crews, 38, and her boyfriend William Hoehn, 32, were both formally charged over Greywind’s death on Monday after the body was found

They had previously been arrested when a two-day-old baby, believed to be Greywind’s daughter, was found in their apartment.

Hoehn told police he came home to their bloodied apartment on August 19 and claimed Crews presented him with the baby girl saying: ‘This is our baby. This is our family.’

He said he took garbage bags containing bloody shoes and his bloody towels and disposed of them away from the apartment complex, according to court documents filed on Monday.

It is a different version to what his girlfriend claimed happened.

Crews had initially told police that Greywind gave up her baby before admitting to taking advantage of the woman in an attempt to get her baby.

According to court documents, Crews told police she arranged to have Greywind come to her apartment on August 19 and told her how to induce labor.

Crews said Greywind came back two days later to give her the newborn baby.

‘Crews admitted she had taken advantage of Savanna Greywind in an attempt to obtain her child and possibly keep the child as her own,’ the documents said.

They didn’t enter pleas and their bond was set at $2million for each of the suspects. 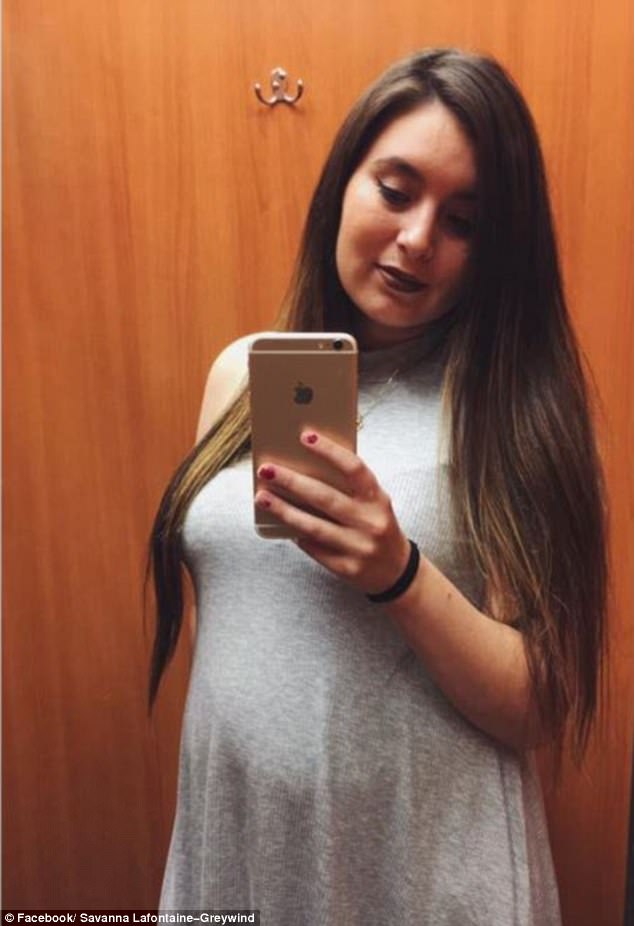 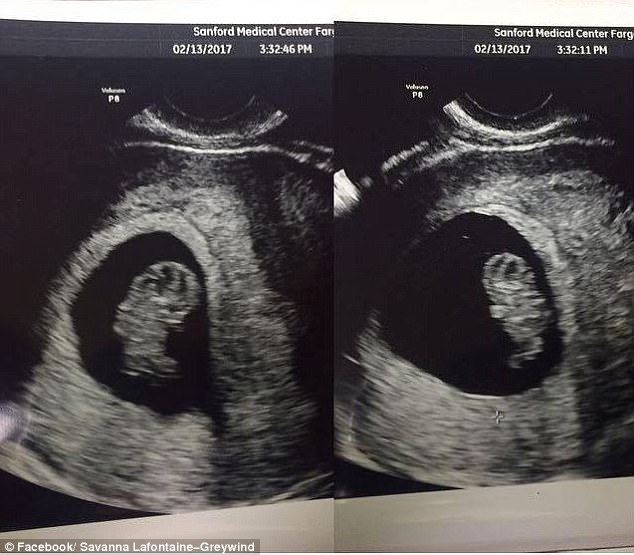 Experts had previously said it was possible Greywind (who shared this ultrasound of her baby) was the victim of womb raiders, people who cut babies out of pregnant women to steal them

Neither showed much emotion, although Hoehn objected to the bail amount as ‘unattainable for any regular person’.

Their court-appointed attorneys, Stormy Vickers for Hoehn and Monty Mertz for Crews, did not immediately respond to requests for comment.

Experts had previously said it was possible Greywind was the victim of womb raiders, people who cut babies out of pregnant women to steal them.

While womb raiding is a terrifying scenario, it’s also exceptionally rare, at less than 20 cases in the U.S. total.

Infant abduction expert John Rabun, of the Center for Missing and Exploited Children, told Inforum that typically womb raiders are women who have faked a pregnancy in order to keep a partner from leaving her.

As the fake pregnancy nears full term, the woman finds a victim and performs a forced caesarean section to steal the baby.

‘This actually takes some fairly detailed planning,’ Rabun said. ‘Usually, the woman who needs the baby will befriend the pregnant woman. She’ll play on the common bond of them both being pregnant, even though she really isn’t pregnant. She’ll gain trust however she can.’

But what’s different about this case is that the two people arrested in connection to Greywind’s disappearance are a man and a woman. 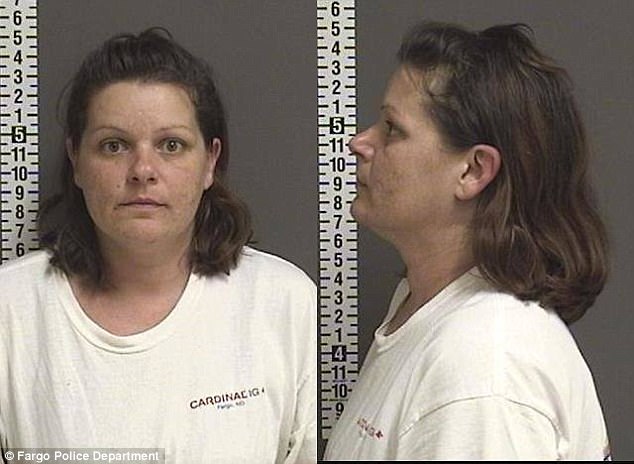 Brooke Lynn Crews, 38, was arrested and charged with conspiracy to commit kidnapping in the disappearance of Greywind. Investigators found Crews in her apartment, alongside a newborn baby believed to be Greywind’s daughter 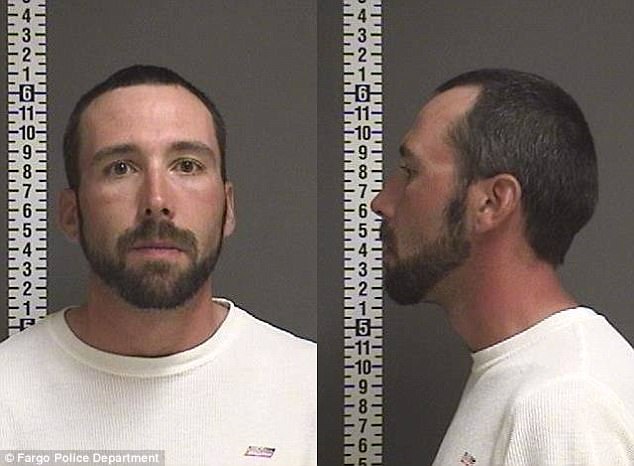 William Henry Hoehn, 32, was arrested and charged with conspiracy to commit kidnapping in Greywind’s disappearance. He and Crews were taken into custody on Thursday

‘What’s unusual in this case is you have both a man and a woman,’ said Ann Burgess, a Boston College nursing professor who was a lead researcher in a 2002 study on newborn kidnapping by Caesarean section. ‘If it turns out to be what we’re talking about, it would be unusual because, in most cases, the man is just on the periphery. He isn’t part of what’s going on until after the fact.’

Hoehn and Crews were Greywind’s neighbors and it is believed she had gone to their apartment to help them with a sewing project before she disappeared.

During a press conference on Friday, Todd said that investigators discovered a newborn baby girl in the apartment with Crews.

It’s believed that the baby is Greywind’s child, but authorities are waiting for DNA testing confirmation.

At the time of her disappearance, Greywind was said to be eight months pregnant.

The newborn is being taken care of at a medical facility.

Todd said that Hoehn and Crews were interviewed by detectives at the police station on Thursday and that both suspects were initially cooperative, but when asked about what happened to Greywind, they both asked for lawyers and stopped answering questions.

At that point, Todd said, they were arrested and charged with felony conspiracy to commit kidnapping.

Greywind’s body was found on Sunday, wrapped in plastic in a river.

Two kayakers found the body around 8.20pm Sunday in the Red River, between Fargo, North Dakota, and Moorhead, Minnesota.

The body had been wrapped in plastic and was caught on a tree or log branch in the river. 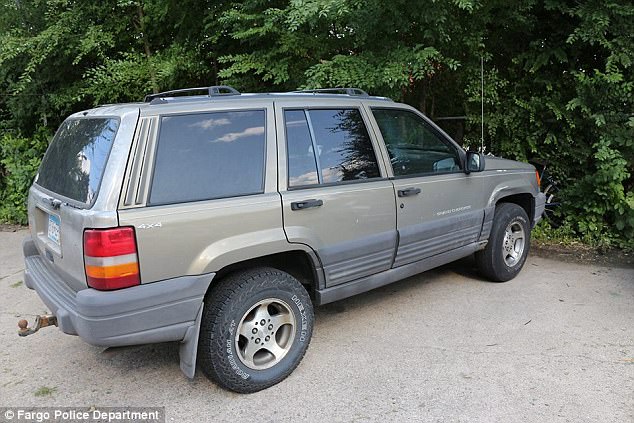 Police are asking neighborhood residents to come forward if they saw this Jeep, belonging to Crews and Hoehn, on Saturday or Sunday, the day of and following Greywind’s disappearance