Couple get married suspended 400 feet over a Utah canyon

A thrill-seeking California couple marked their marital union in high-flying fashion last year by getting married on a net suspended 400 feet above a Utah canyon.

Ryan Jenks and Kimberly Weglin first fell in love in Moab years ago while attending the high-lining festival, GGBY, which attracts adventurous climbers from around the world every year, and even got engaged at the festival last year.

So, when it came to saying ‘I do,’ the couple thought GGBY would be the perfect place to make things official – and it was nothing short of spectacular.

Taking it higher: Ryan Jenks and Kimberly Weglin of California tied the knot above a canyon in Moab, Utah, with the help of a massive space net 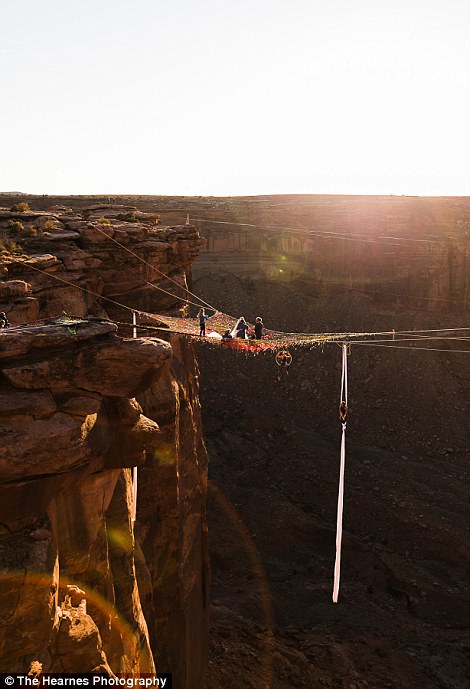 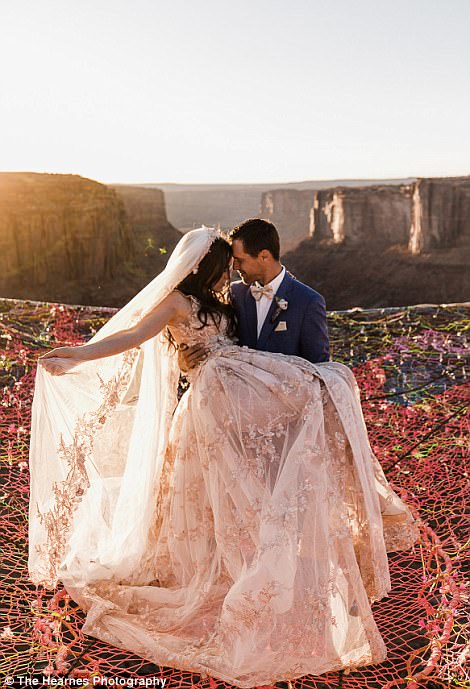 Daredevil couple: The pair of slack-lining obsessives were wed the day before the 2017 GGBY festival, where they originally met and were even engaged at the year before 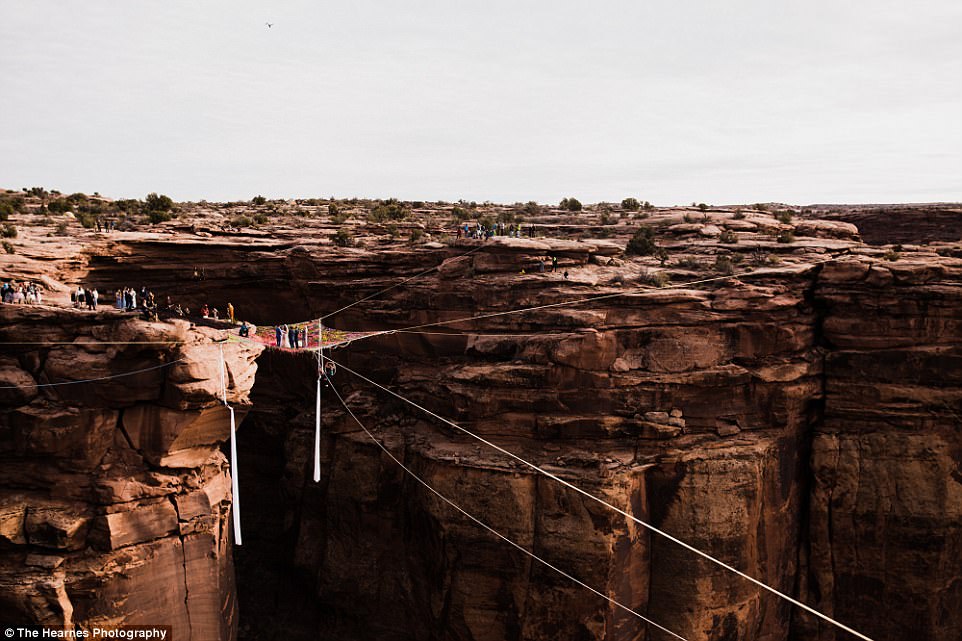 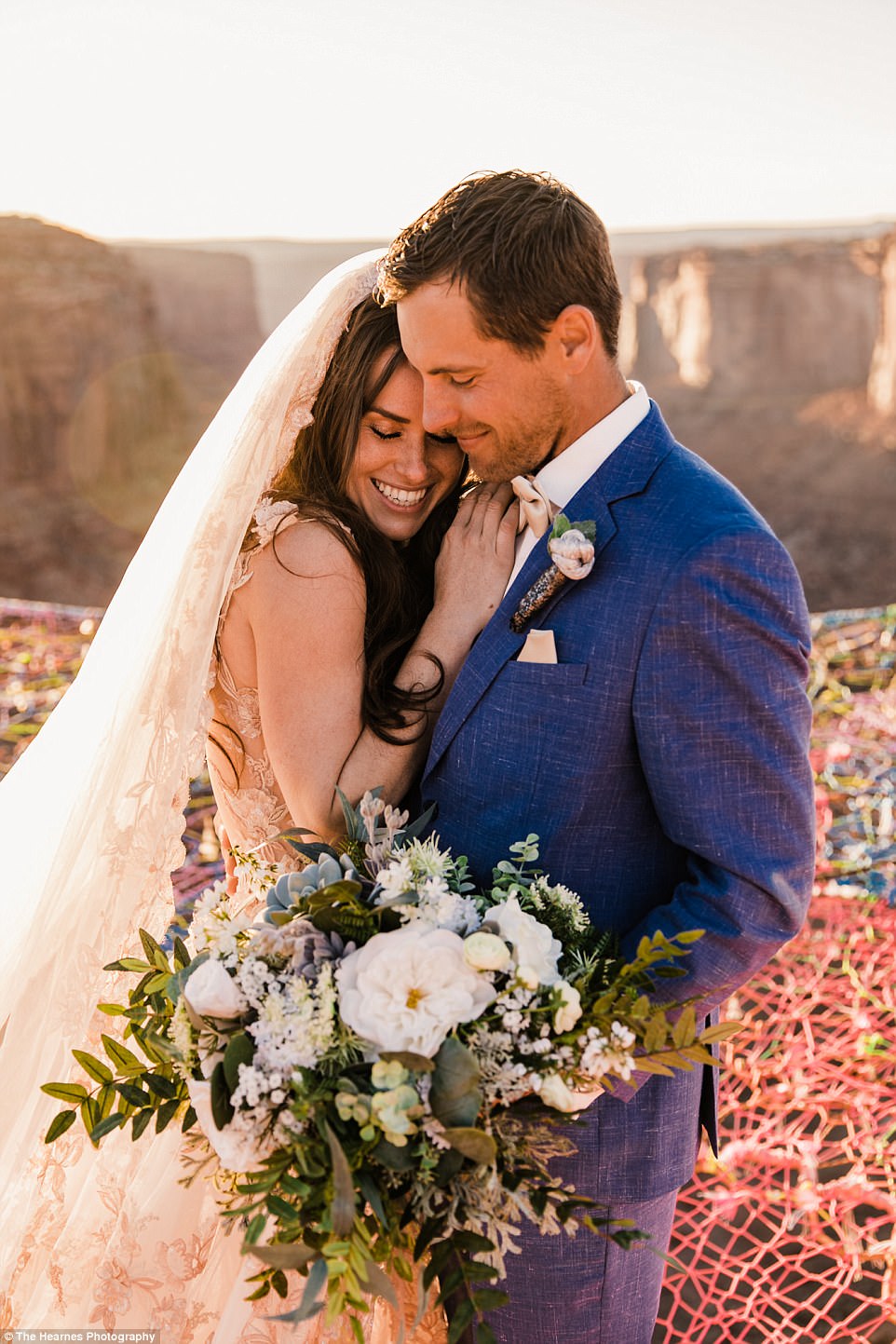 Snuggled up: Photos of the beautiful couple and the stunning event were snapped by Abbi Hearne

Photos of the wedding were taken by Abbi Hearne, who described the event on her website as ‘epic, amazing, and crazy.’

The ceremony was set up on the day before the festival began, with best man Andy Lewis engineering an incredible space net to hold up the couple over a terrifying drop into a canyon.

‘After throwing around a lot of ideas, they decided they’d use the original net and add an “aisle” so they could walk out to it,’ Abbi explained. 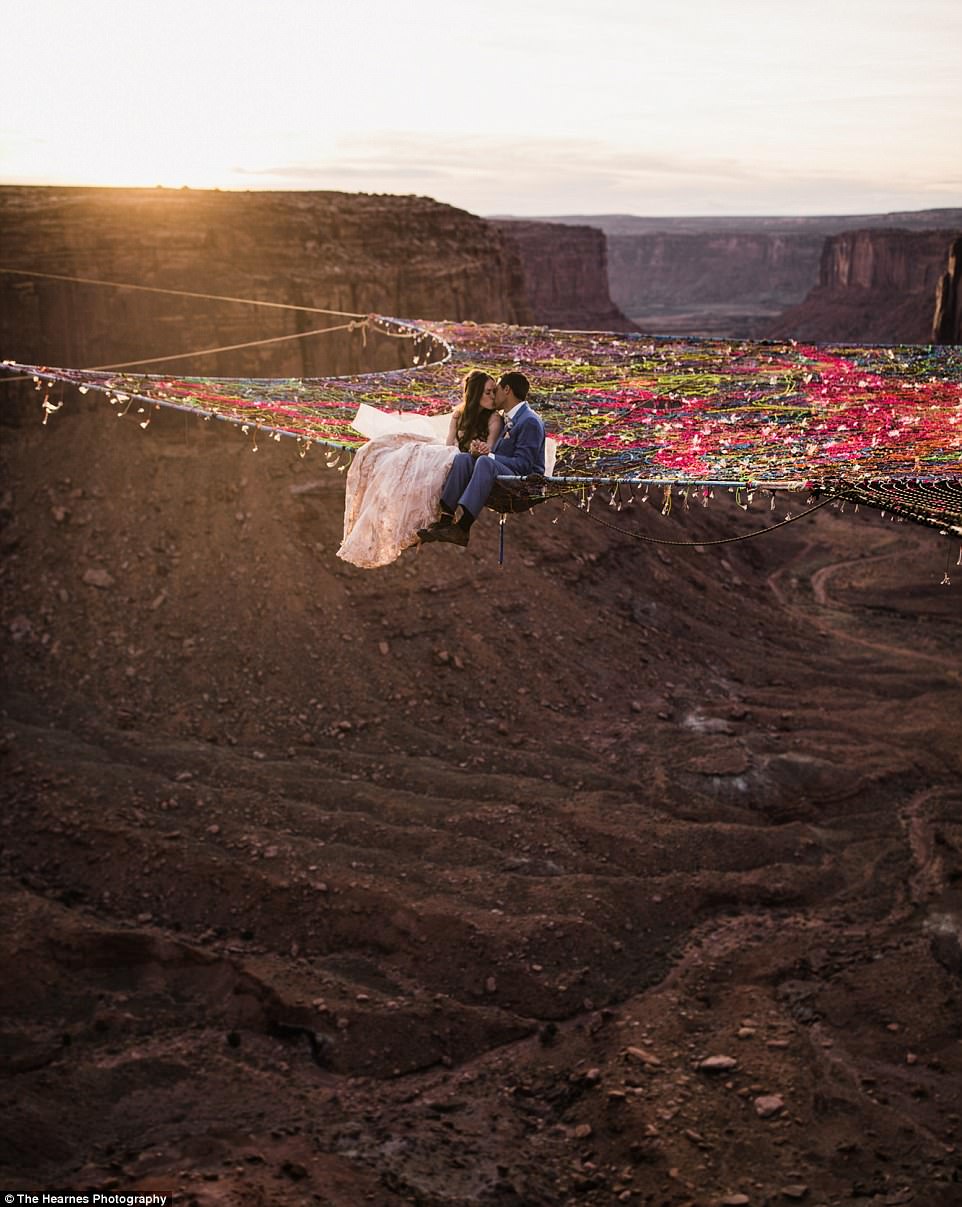 Kisses: The wedding itself made headline news in November before the photoblog was posted 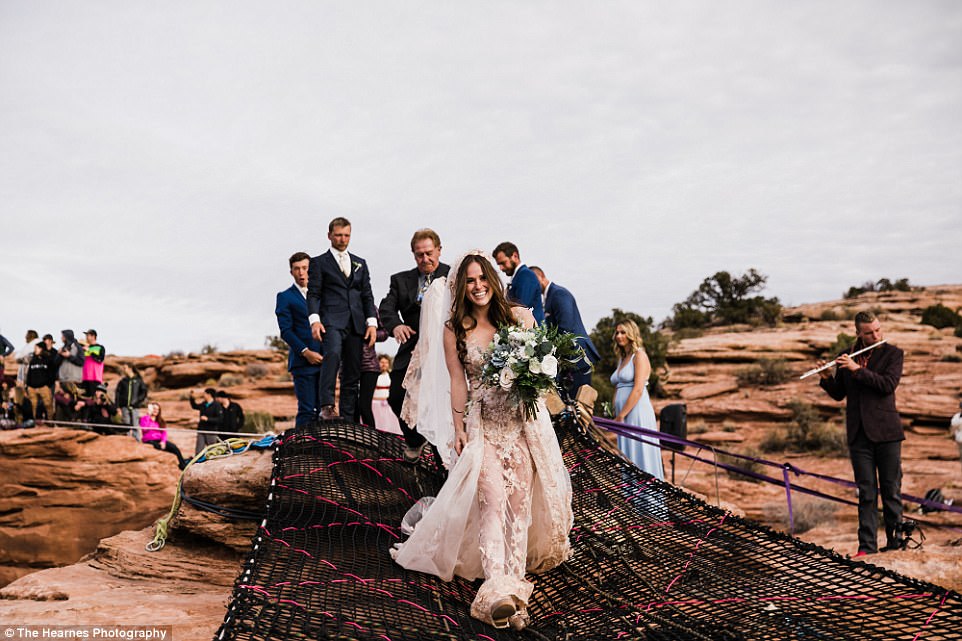 Walking the walk: A large ‘aisle’ was set up so Kim could walk down it to her soon-to-be-husband 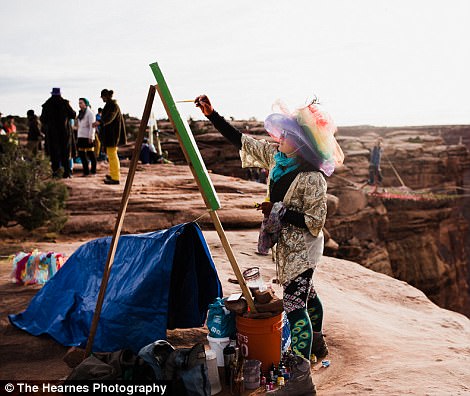 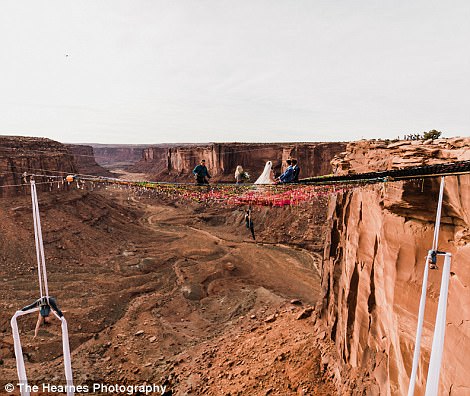 More going on: Friends of the couple painted nearby and three even performed aerial stunts from the sides of the net 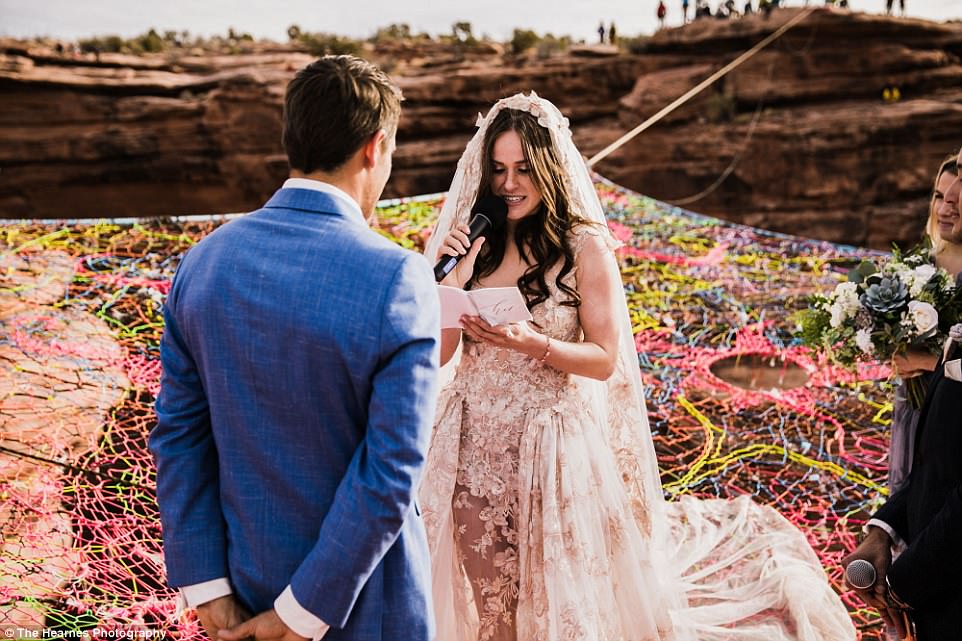 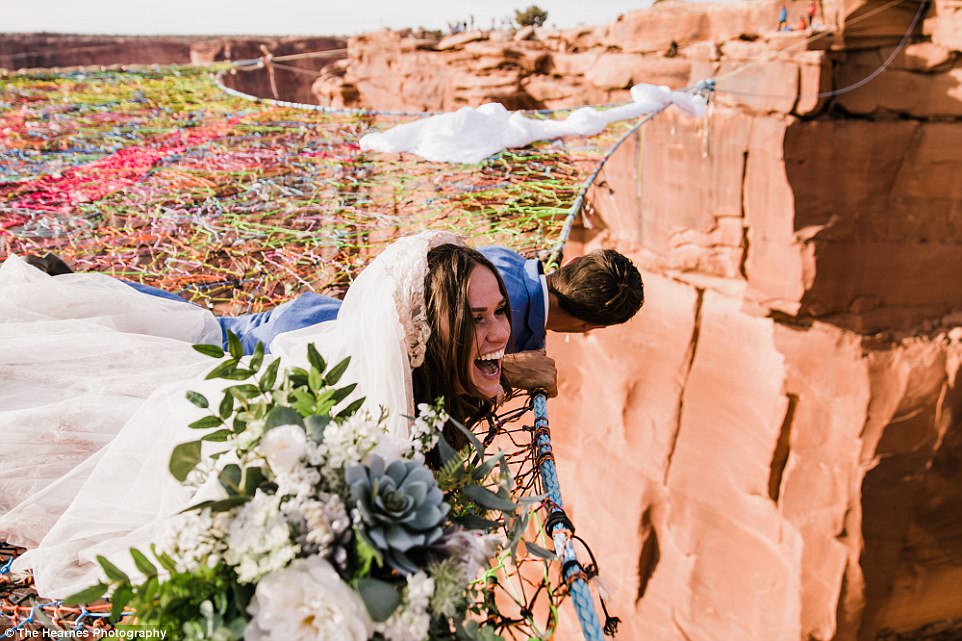 Looking over: The thrill-seeking couple were watched by guests dotting the cliffs of the canyon and hanging on their own wires

The multi-colored net was secured 400 feet above the ground and surrounded by various other high-lines where similarly adventurous onlookers took in the ceremony and three of the couple’s friends performed aerial stunts.

Also going on around the scenic setting was a friend painting the sight, another playing the flute, and another blowing giant bubbles.

Kim walked down the ‘aisle’ accompanied by a man, presumably her father – who had a little trouble keeping upright as he made the nerve-wracking trek – in a stunning sheer Galia Lahav dress and matching veil. 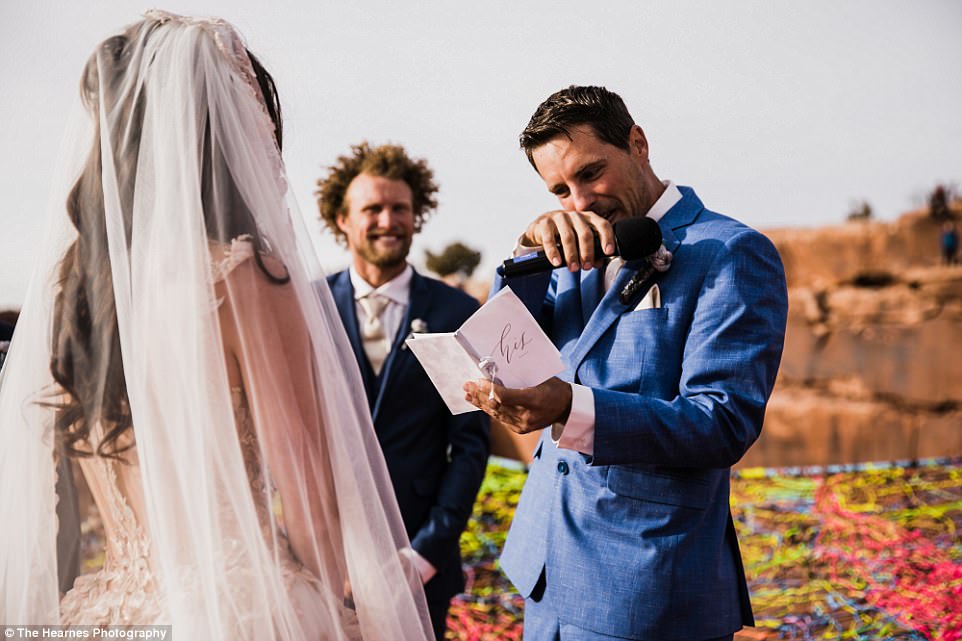 Big moment: Ryan got a bit choked up while reading his vows to his beautiful bride 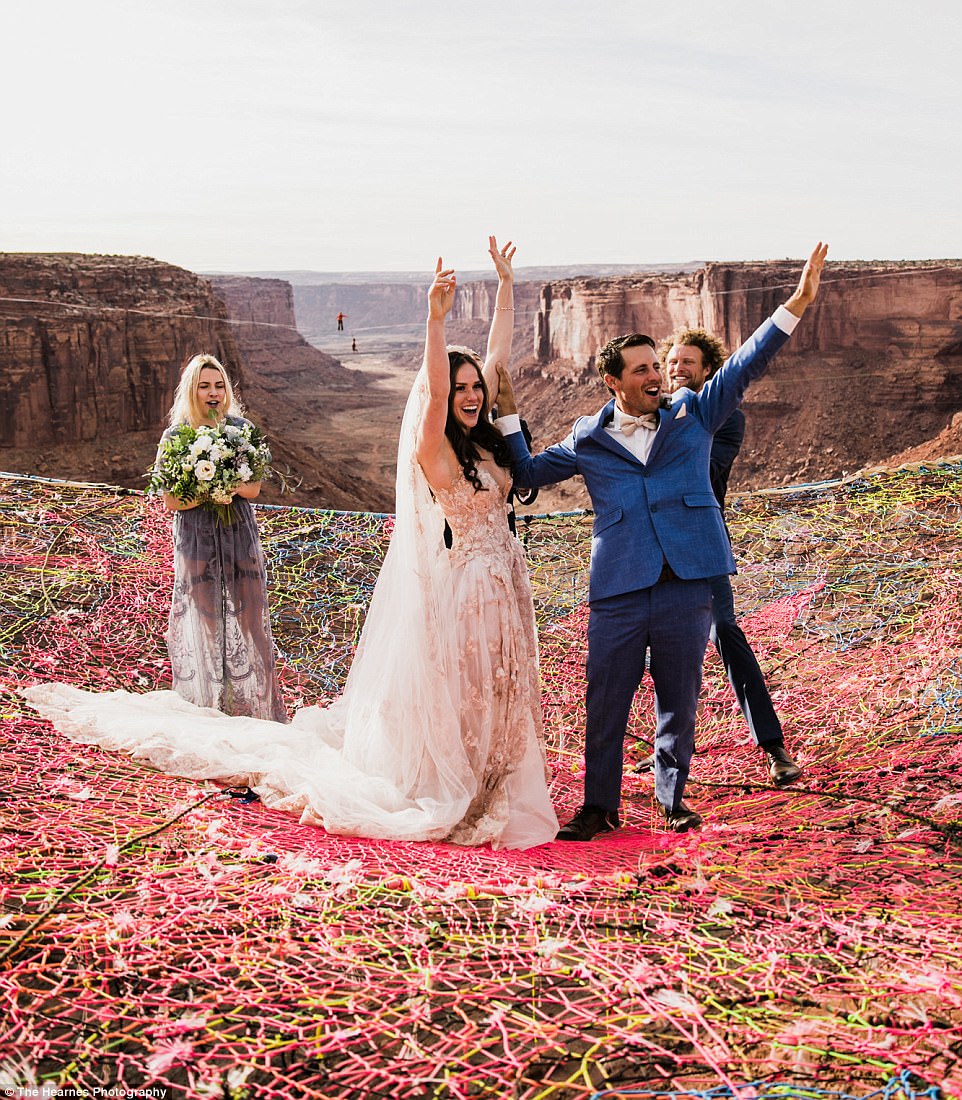 Done deal: The couple sealed their union with a pair of ‘hell yeah’s in the place of ‘I do’ 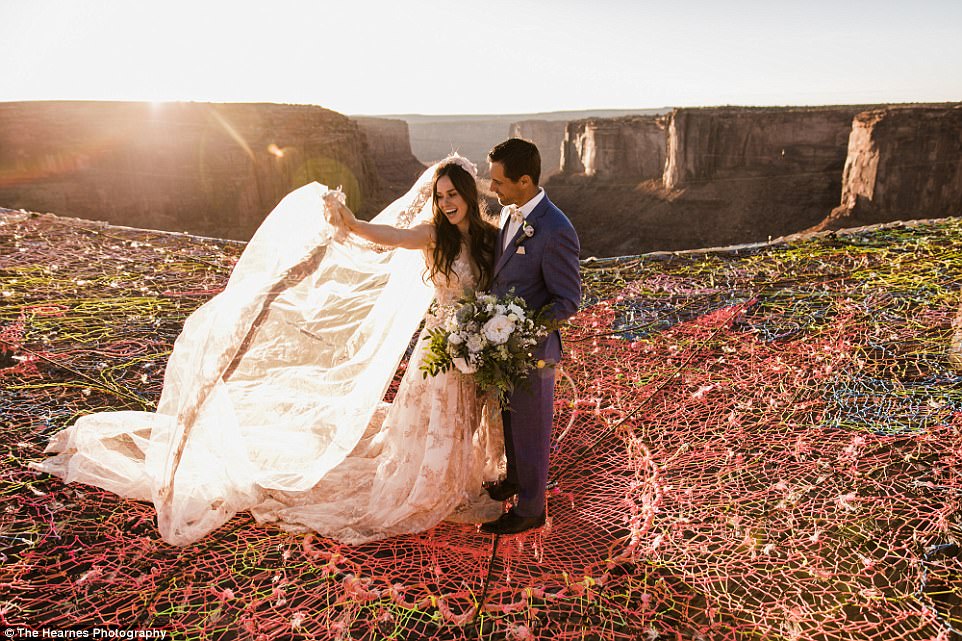 All them: Photographer Abbi praised the couple for staging a wedding that combined ‘their passions, hobbies, interests, and personalities into every detail’ 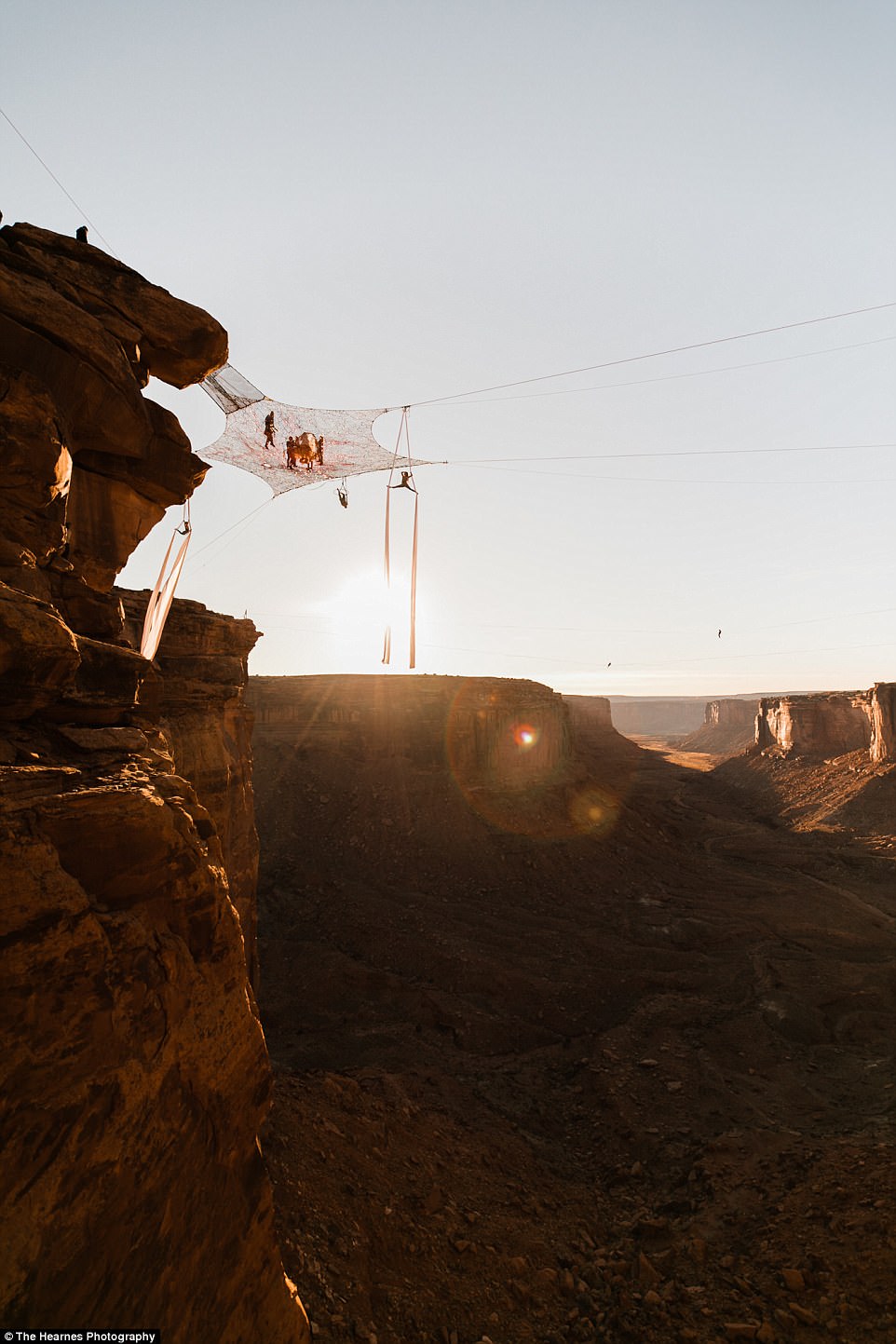 Death-defying: The ceremony was filmed by a drone to capture the scale of the scene and the incredible height of the net 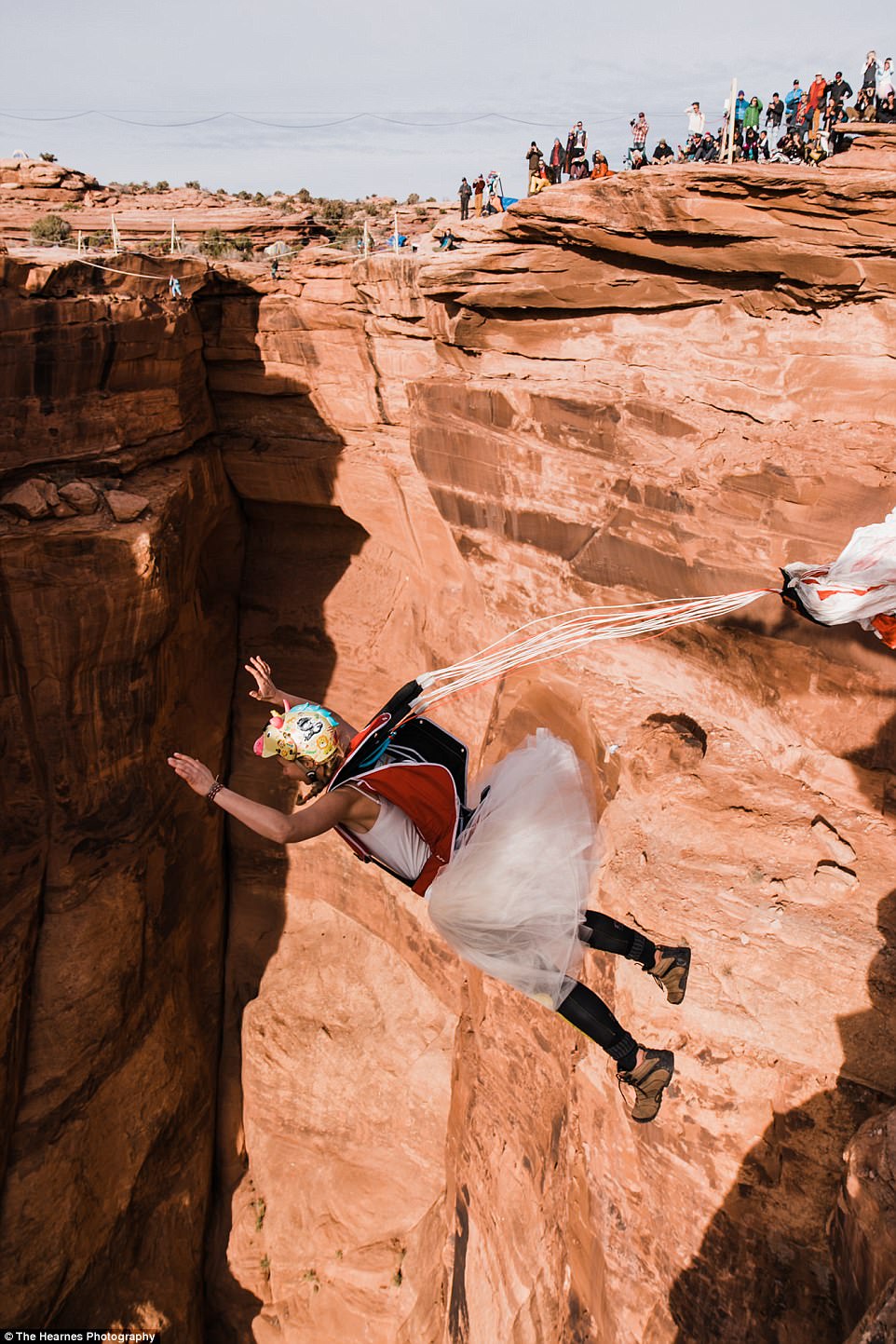 Final act: The ceremony finished with 10 BASE jumper ‘flower girls’ who leaped off the cliff edges to release flower petals

‘As they ended their ceremony, exchanging “Hell Yeahs” instead of “I Dos,” 10 BASE jumper “flower girls” lined along the cliff edges in tutus and jumped off one-by-one, releasing 5,000 flower petals that had been packed in their parachutes,’ Abbi wrote.

Abbi also praised the couple for creating an event that combined ‘their passions, hobbies, interests, and personalities into every detail.’

Ryan and Kim are not only both slackliners, but also together co-founded Slackademics, a website dedicated to slackline and highline art and education.