Couple have lived on building site for three months after paying £44,000 for extension

A couple have been living on a building site for months after paying a building firm £44,000 for an extension – only for them to go bust two weeks after starting work.

Alan Street and his partner Joanna Hart are stuck living with a wooden shell that should form the base of their extension outside the back of their home after the contractor went bust.

But despite shelling out £44,000 to an Essex-based building firm, IT consultant Alan, 36, and his 30-year-old partner Joanna have been left with another £20,000 bill if they want to get others to complete the work, at their terraced home in Romford, north east London.

Hudson Garden Rooms started building the modern extension in May, but they disappeared after just a month of construction.

IT consultant Alan said: ‘They totally disappeared apart from a couple of emails saying ‘yes, we will be back to complete the job on July 1′, but they never showed up.’

‘The structure sits on piles.

Alan Street among the timbers of a planned extension to his Romford home, which lies unfinished  after the construction company ceased trading and went into liquidation

‘It’s quite a new design which has not had the necessary tests, so only a few structural engineers will sign it off.

‘We will need to take everything down, get the piles tested and pay an engineer for a report to make it legal.

‘All the timber can be reused, but it’s the high-value items like the bi-folding doors and the sky light which hit us hardest.

Alan now has an empty timber shell in his back garden and faces a whopping bill of more than £20,000 to fix the mess.

He said: ‘I’m not proud of what happened, but I’m not ashamed either. I did everything I could have done. 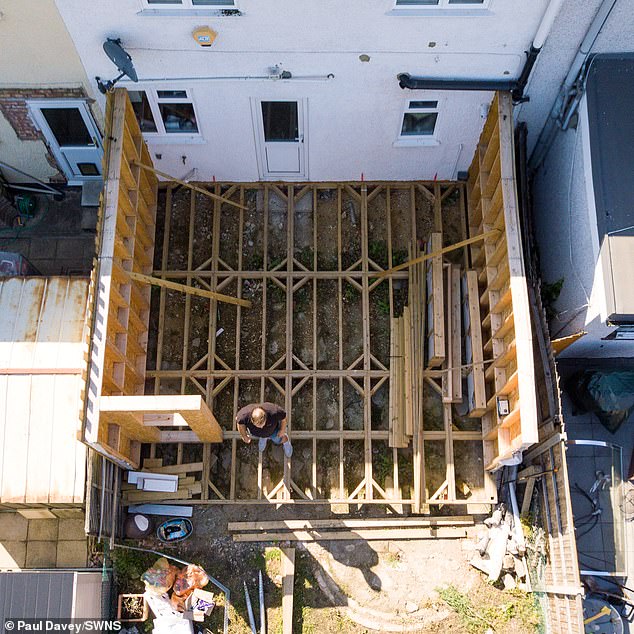 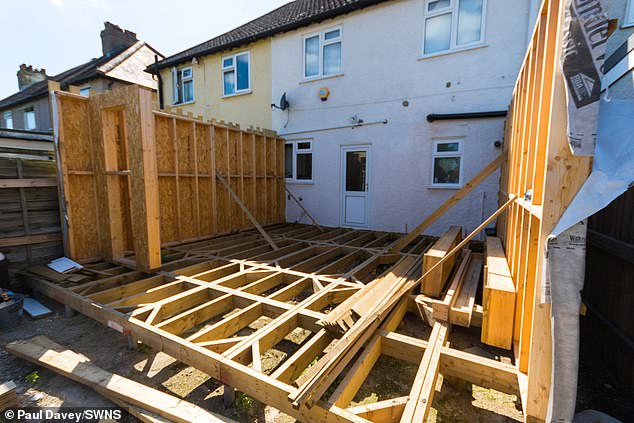 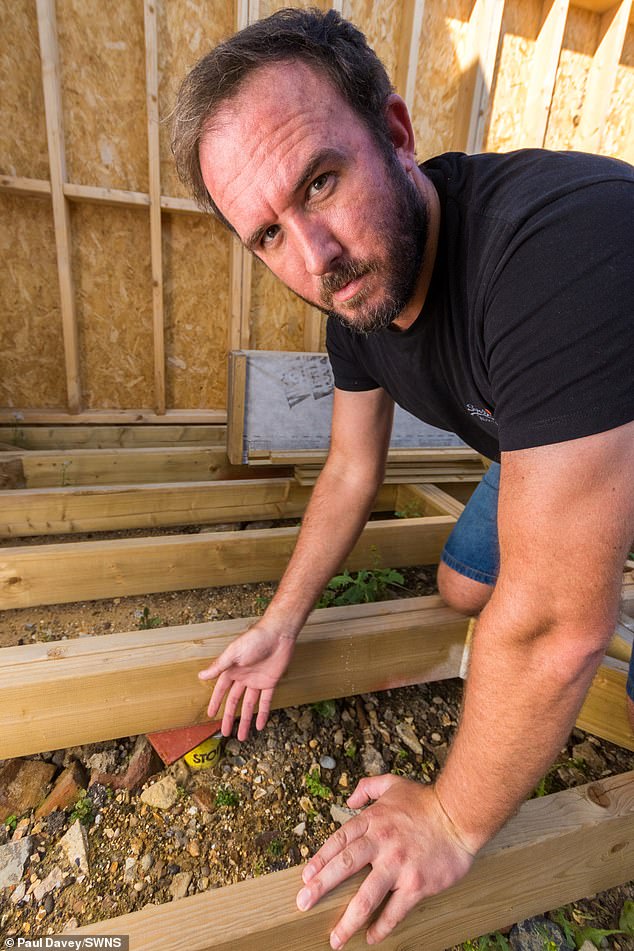 ‘I checked the company’s financial standing and as far as I could see, it was all fine.

‘Lots of people have had their extensions knocked down completely because planners hadn’t approved them.

‘Some people have even had to remortgage after losing fortunes of up to £90,000.’

Now customers have complained they have been unable to get hold of the owners for weeks since they responded to a few emails in June.

Alan said: ‘The owner told me he had changed the company’s name to Hudson Living because they now did home extensions too.

‘It was a load of rubbish. They changed the name because they were in money trouble. 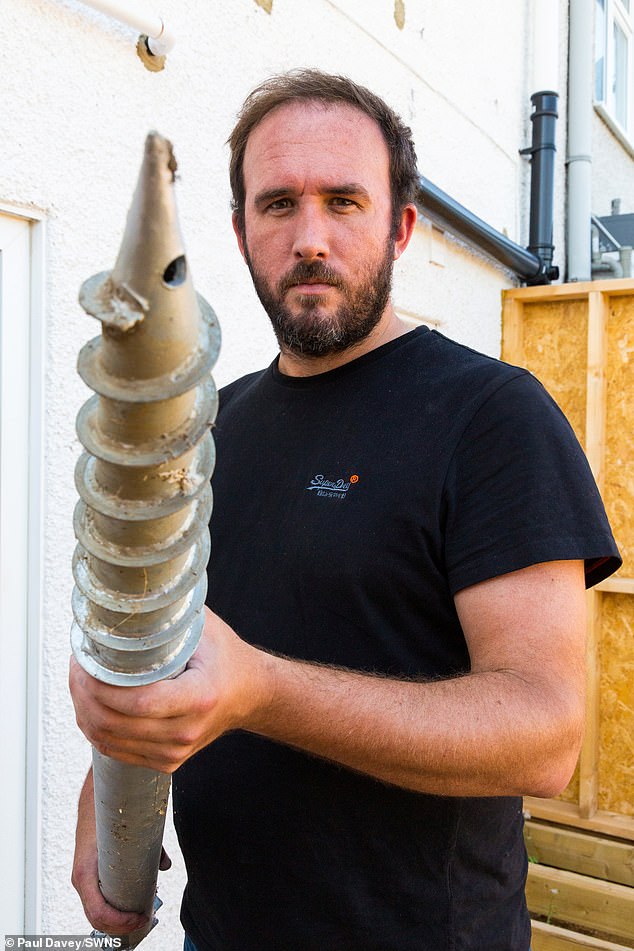 Alan Street shows one of the piles driven into the ground for an extension he was having built for his Essex home, only for the company constructing it to cease trading 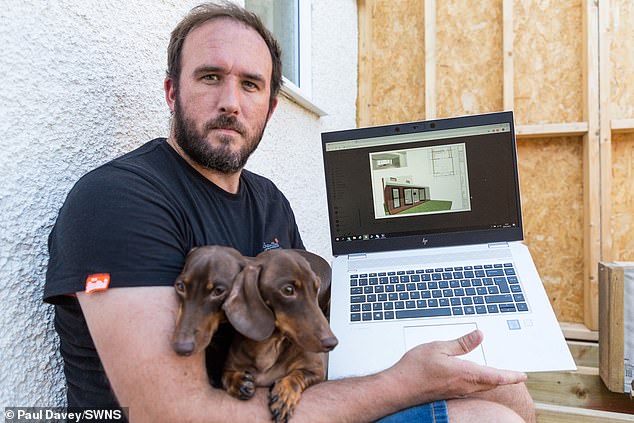 Alan Street, with his two Daschunds, shows the plans an extension he was having built for his Essex home, only for the company constructing it to cease trading 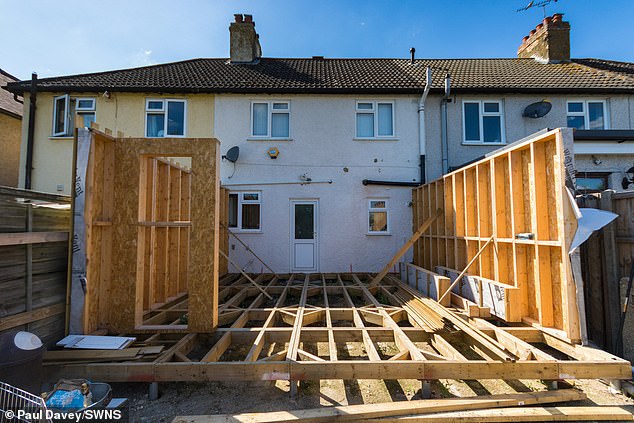 Alan and his girlfriend contacted Hudson Garden Rooms in October after seeing their adverts on Facebook, and paid them £44,000 in December.

The couple eventually agreed for the firm to build an extension at their home in Hornchurch, east London, in October, but first broke ground in May.

After putting the timber foundations down, the company emailed Alan to say they could not continue the work.

He then received a blanket email on June 3 saying works were paused due to refinancing and would resume on July 1.

A spokesperson for Action Fraud said: “I can confirm that Action Fraud received this report in July 2019 and it will be in the process of getting assessed by our National Fraud Intelligence Bureau.”

A botched granny flat has left two sisters £37,500 out of pocket and their elderly mother in a care home after the builders responsible went bust.

Holly Elmhurst, 49, enlisted Hudson Garden Rooms to build a four-room annex in her sister Samantha’s garden for her mother Carolyn Lerski, 76, to live in.

Ms Elmhurst claims her elderly mother paid 90 per cent of the £48,000 fee up front in April 2016 but was devastated when building stopped after three months.

The annex, in Norwich, was only half-built, still on stilts, with minimal insulation, faulty windows and doors and damp everywhere.

Ms Elmhurst tried to take the company to the small claims court – spending thousands of legal fees – only to be told it had gone bust with £400,000 debts and the claim was therefore invalid.

Meanwhile her elderly mother suffered a brain aneurysm and was later diagnosed with dementia. The money lost on the annex meant she had to be put in a care home. 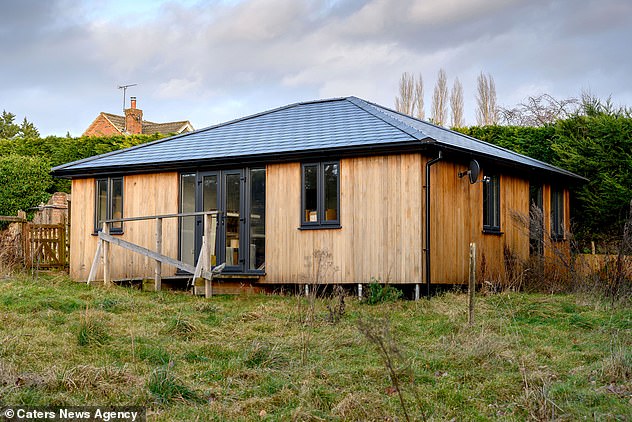 The Elmhurst family paid £43,200 for Hudson Garden Rooms to build this annex for their mother Carolyn to live in. They have since gone bust and left them £37,500 out of pocket 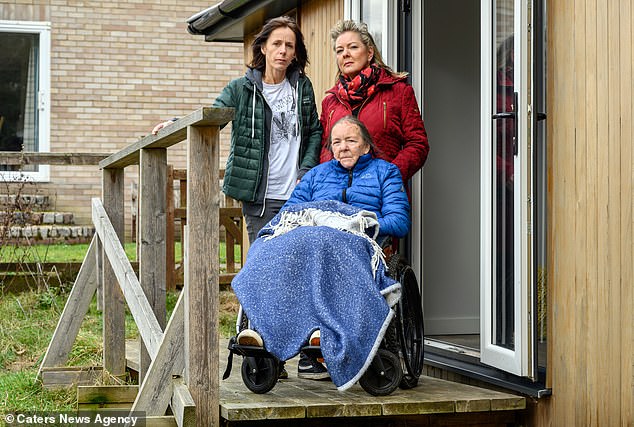 Ms Elmhurst, who claims surveyors have told her fixing the build will cost a further £37,500, said: ‘They said they could build exactly what my mother wanted, and have the work done in three months.

‘But they didn’t put proper drains in, the guttering just hangs over the garden, the floor wasn’t finished, the ceiling is damp on it.

‘We had to pay someone else to fit some decking so my mum could walk inside the property.

‘The property is unlivable, and now mum has had to live in a care home.’

Ms Elmhurst’s sister Samantha, 51, has also been fighting to have the problem resolved.

She said: ‘The company director has never set foot in this place since the first day and didn’t even check what his workers had done.

‘My mum had a brain aneurysm in 2016 whilst build was happening, which led to dementia and her being bound to a wheelchair.’ 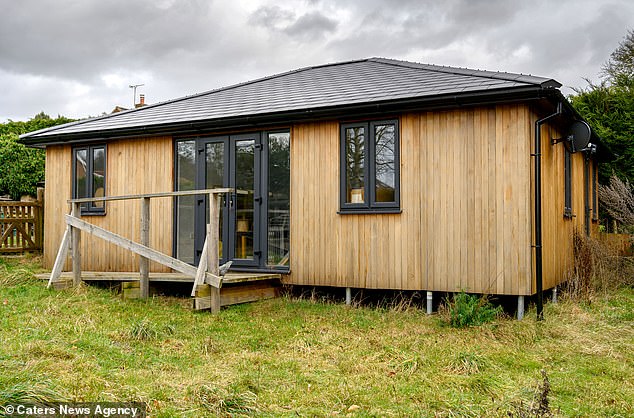 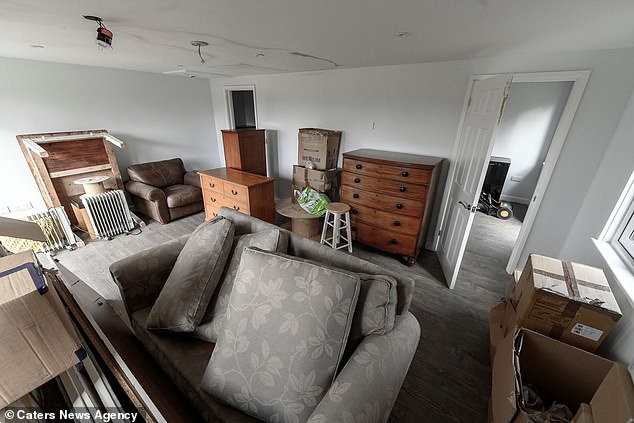 Inside the garden lodge the ceilings were damp, lighting fittings not attached properly and door frames wonky

Single mother-of-two Carolyn moved out of her previous rented accommodation in Norwich so she could be closer to her family but thought the annex was the perfect solution to maintain some independence.

Holly claims she and her family began to notice problems with the build soon after it work started, with construction halting completely in July 2016.

They claim the outbuilding has no ventilation system, foul water drainage, partly un-insulated floors, doors and windows that do not meet fire safety rules, damp staining on the ceiling after an un-insulated water pipe froze and burst and water pipes which were installed halfway up the side of the house rather than being buried.

They were forced to spend thousands on legal fees and claim surveyors told them it will cost a further £37,500 to repair the errors. 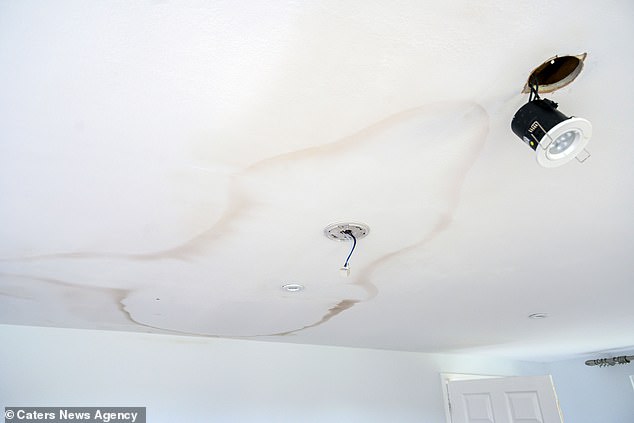 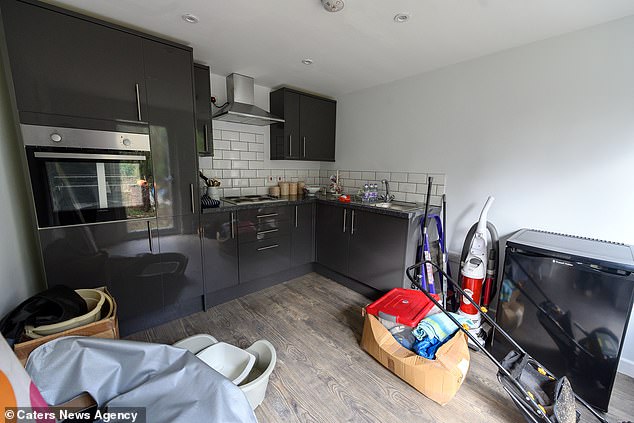 But they also insist they can’t get any money back now the company has gone bust.

Samantha said: ‘The company liquidated itself despite owing £400,000 to creditors – this information can be found on Companies House.

‘It’s awful they’re still able to do this. The way all of us have been treated has been dreadful.

‘The unacceptable and ugly soil and water pipes that Hudsons ‘draped’ around our patio area are a constant reminder of their shoddy work.

‘When you think about what has happened too much, it’s just awful.’

Holly has since set up a JustGiving account to try and recuperate her mum’s lost money and pay for alternative retirement care. 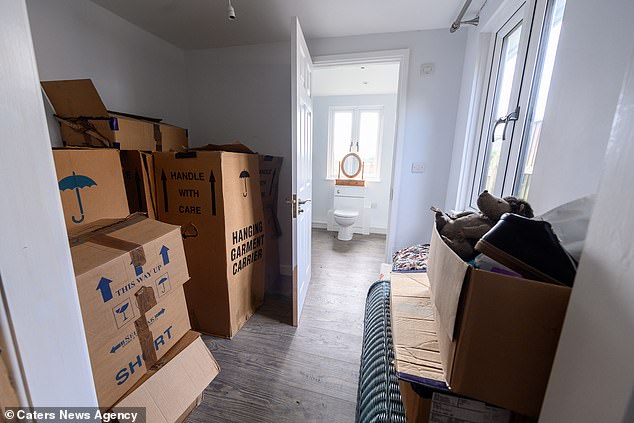 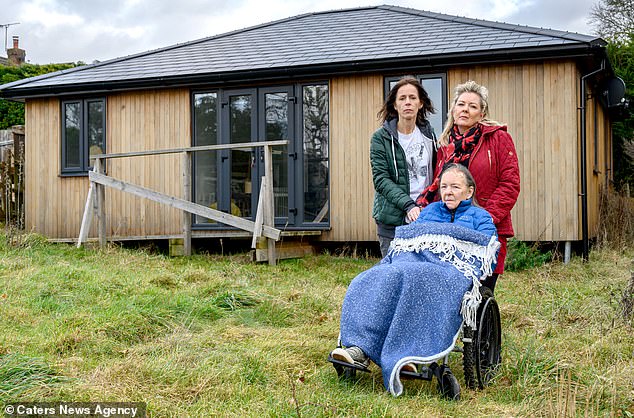