A woman who thought her baby bump would take centre stage in her pregnancy photoshoot found herself upstaged by a cheeky horse.

Amanda Eckstein and Phil Werner, from Cincinnati, Ohio, were reduced to stitches when their horse Buckshot stole the show during their pregnancy photoshoot with photographer Kristen Saffiro.

The couple were meant to pose with Phil’s ten-year-old daughter Ava, but she was unable to make it, so they decided to get their horses, including Buckshot, involved insread.

Kristen explained that attention-loving Buckshot started pulling faces for the camera, and the more they couple laughed, the more he would ham it up.

The pictures went viral after Kristen shared them online, with many people saying they’ll be a lovely memory that Amanda and Phil will be able to share with their child in the future.

Excepting parents Amanda Eckstein and Phil Werner were reduced to stitches when their horse Buckshot decided to steal the spotlight during their maternity photograph session, pictured 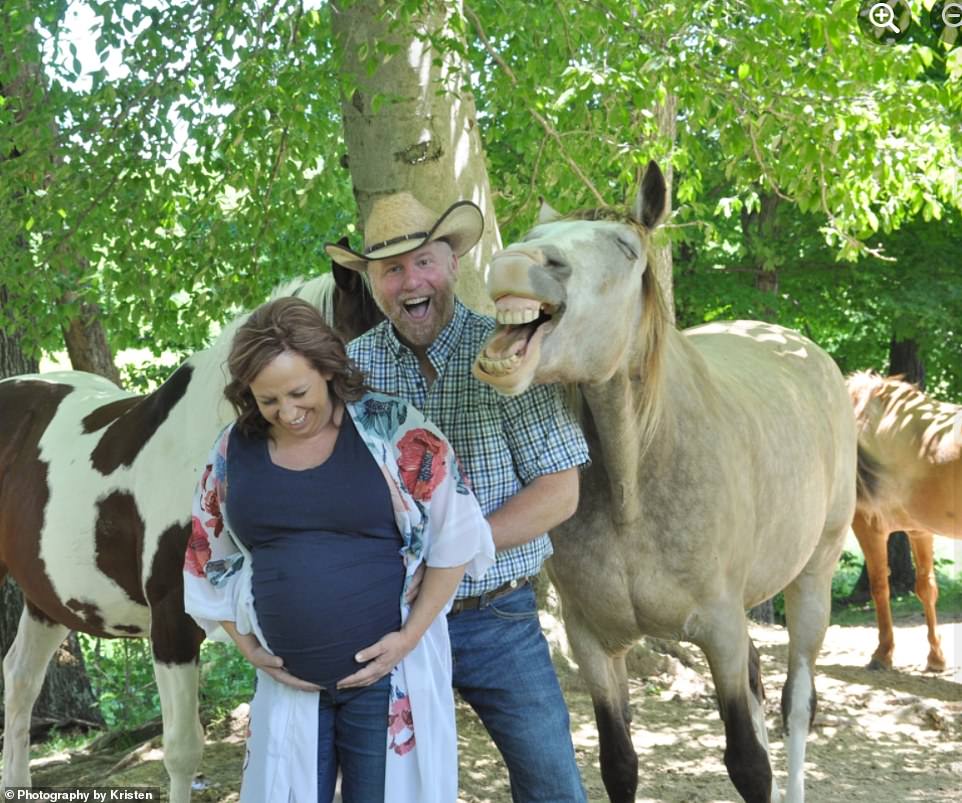 Photographer Kristen Saffiro captured the hilarious moment Buckshot made Amanda and Phil laugh so hard, they couldn’t go through with the shoot in a serious way

Krsiten explained how she managed to snap the hilarious pictures, during what started like any other pregnancy shoot.

The photographer, who said she asked Buckshot to smile, was surprised when the animal actually followed her guidance and cracked a grin.

The moment made her laugh, which encouraged Buckshot to only smile more for the camera.

‘He seemed to smile, which made me laugh. He loves attention, so the more I laughed, the more he smiled,’ Zaffiro told Cafemom. 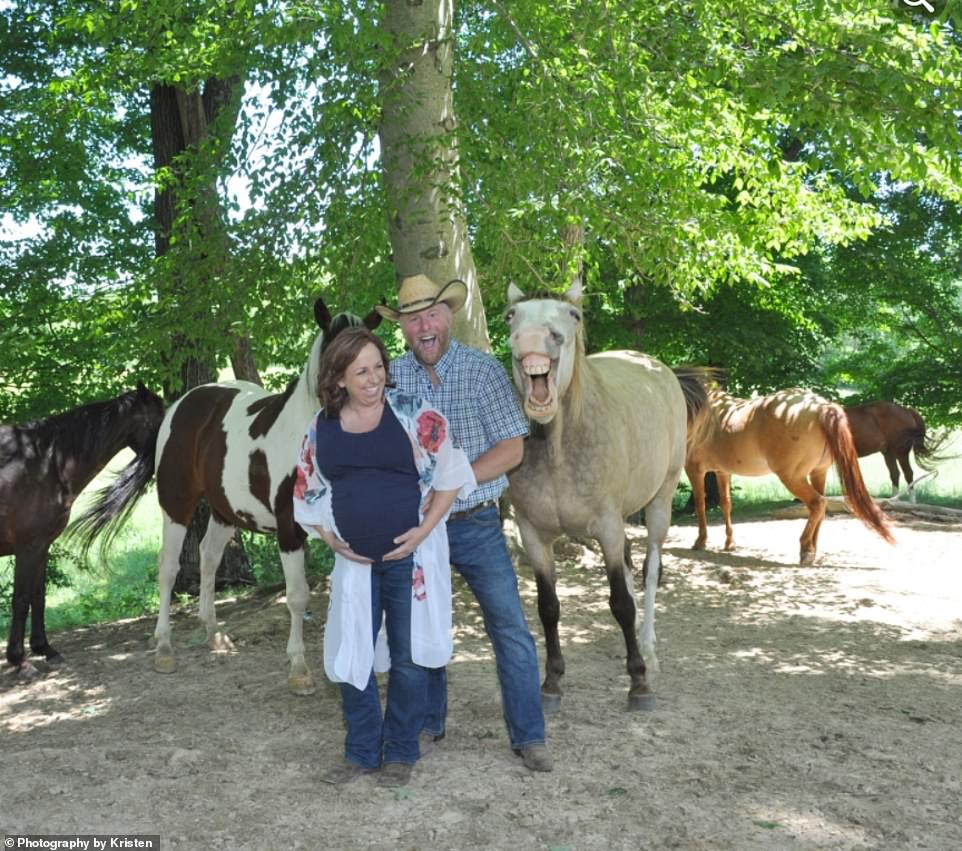 Kristen explained she asked Buckshot to smile, and when he started playing up for the camera, it made her laugh, which encouraged the cheeky horse to ham it up even more

Once they noticed their horses antics, Amanda and Phil were quick to lose it, with Zaffiro’s camera immortalising the hilarious moment.

While the irst snap is a lovely photo of Phil cradling Amanda’s baby bump with his hands, the others show how a determined Buckshot increasingly ztole the limelight from his owner with his contagious smile.

The photograph shared the pictures on her Facebook page, saying it was the ‘best maternity session ever.’ 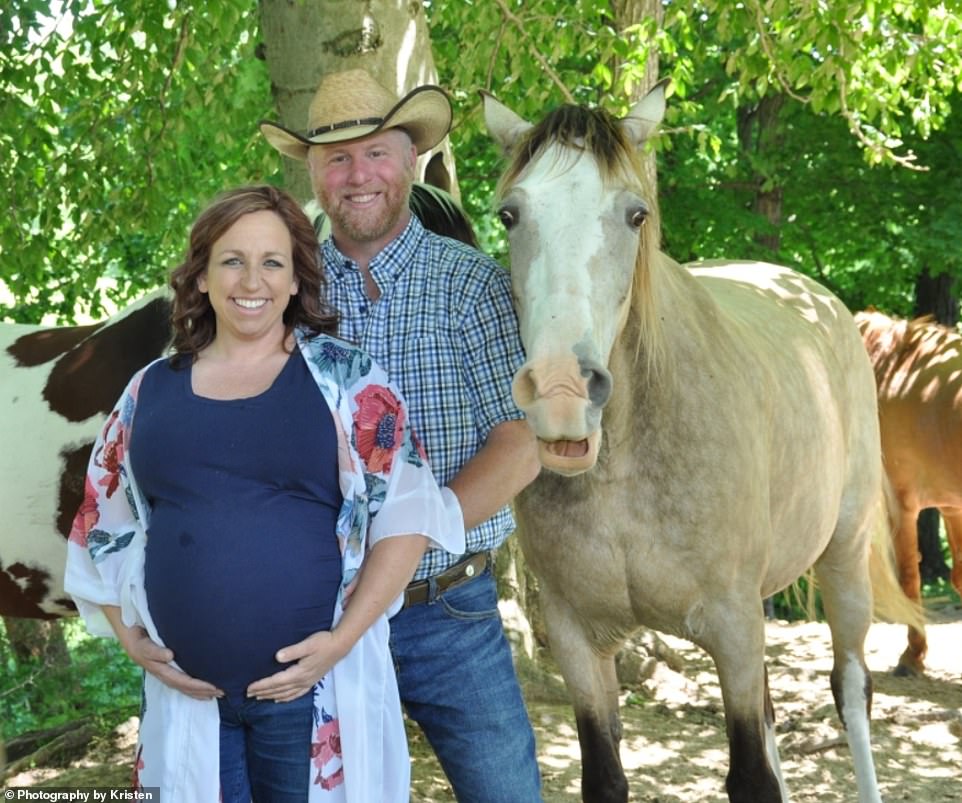 Kristen asked Buckshot to smile because at first, he wasn’t being the best model. The couple decided to get their horses involved after Phil’s ten-year-old daughter Ava couldn’t make the photoshoot

Zaffiro said she was touched by the positive reaction, saying she loved that many people were sending their good wishes to Amanda and Phil.

‘There have been a few people in the comments saying that this is the first time they smiled in 2021,’ she said.

‘Some people have said it’s made their hospital stay so much easier.’ 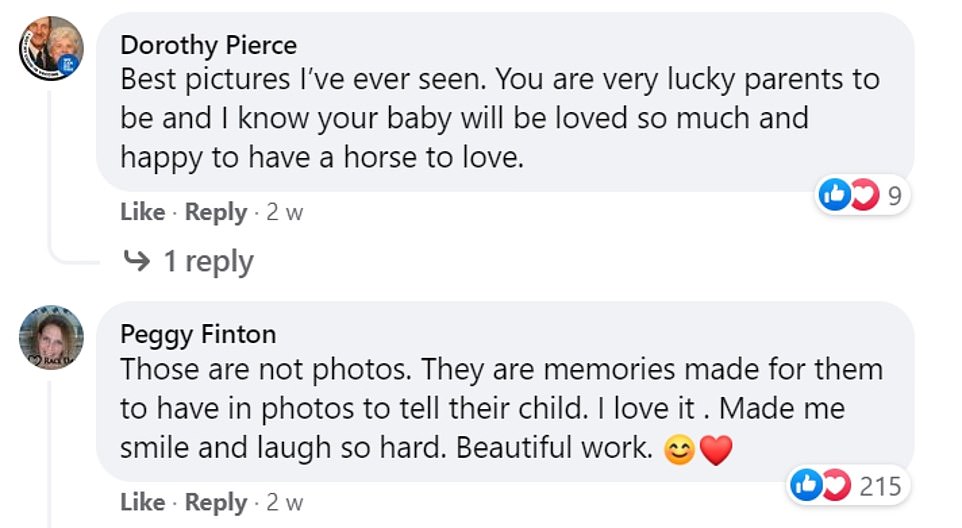 People online loved the pictures and they went viral all around the world, with many sending their good wishes to Amanda and Phil

Online, people have shared how much they liked the pictures and Buckshot’s antics.

‘Best pictures I’ve ever seen. You are very lucky parents to be and I know your baby will be loved so much and happy to have a horse to love,’ one said.

‘Those are not photos. They are memories made for them to have in photos to tell their child. I love it . Made me smile and laugh so hard. Beautiful work,’ another wrote.

‘These are awesome. So much love for the pictures. Congratulations to the family, including the 4-legged ones,’ one sent.

‘I think you won the photographers’ lottery! Congrats, awesome pics,’ said another.