An Ontario couple imprisoned a homeless man in their basement for almost 25 years and claimed his newborn baby as their own while subjecting him to routine abuse, including savage beatings and neglect, it was alleged on Saturday.

Gary Willett Sr and his wife, Maria, face charges of forcible confinement, assault, theft, and abduction of a child under the age of 14.

The couple has pleaded not guilty, according to The Toronto Star.

The story began in the late 1980s, when the Willetts befriended Tim Goldrick and his then-partner, Barbara Bennett.

The couple found Goldrick searching in the trash for food behind their apartment building in downtown Toronto, where Willett, Sr worked as a superintendent.

The Willetts, then just newlyweds, offered Goldrick and Bennett, who were both homeless at the time, food and a place to stay.

Gary Willett Sr (above) and his wife, Maria, face charges of forcible confinement, assault, theft, and abduction of a child under the age of 14

The couple arranged for Goldrick and Bennett to stay at a basement apartment in their building, Goldrick testified in court.

For months, Goldrick said, he and his wife helped the homeless couple find another apartment after they were threatened with eviction.

Even though the baby belonged to Goldrick and Bennett, the birth certificate listed Gary Willett, Sr and Maria Willett as the parents.

Authorities allege that the Willetts took advantage of an unspecified ‘intellectual disability’ and filled out hospital paperwork after Bennett gave birth to the child.

Bennett testified that Maria Willett gave her a health card to use.

The boy to whom Bennett gave birth was named Gary Willett Jr.

From that moment on, Bennett says that the Willetts acted as the boy’s de facto parents.

‘We were all living together . . . It’s not like I was away at a totally different address that they’d be going to. I’d still be there,’ she said.

Willett Sr claims that Goldrick and Bennett asked him and his wife to take the baby.

Instead of going through the adoption process, the Willetts simply passed the child off as their own.

The Willetts had already adopted two children unrelated to Goldrick and Bennett.

In the months after Gary Willett Jr was born, the Willets, Goldrick, and Bennett moved together to live in two different houses in North York, Ontario.

It was in North York that prosecutors say that the relationship between the couples turned violent.

Bennett testified that she was slapped and hit if she didn’t clean the house property or if the Willetts’ children made a mess.

‘I would get hit and get told to do it again. Clean it up. Clean up the mess,’ she said.

‘I would get slapped. In the face… Three or four (slaps) depending on how mad she was.’

Maria Willett’s sister-in-law testified that Bennett was treated like ‘a slave.’

Willett Jr testified that his biological father was considered a ‘slave-type maid’ during his time with the family. 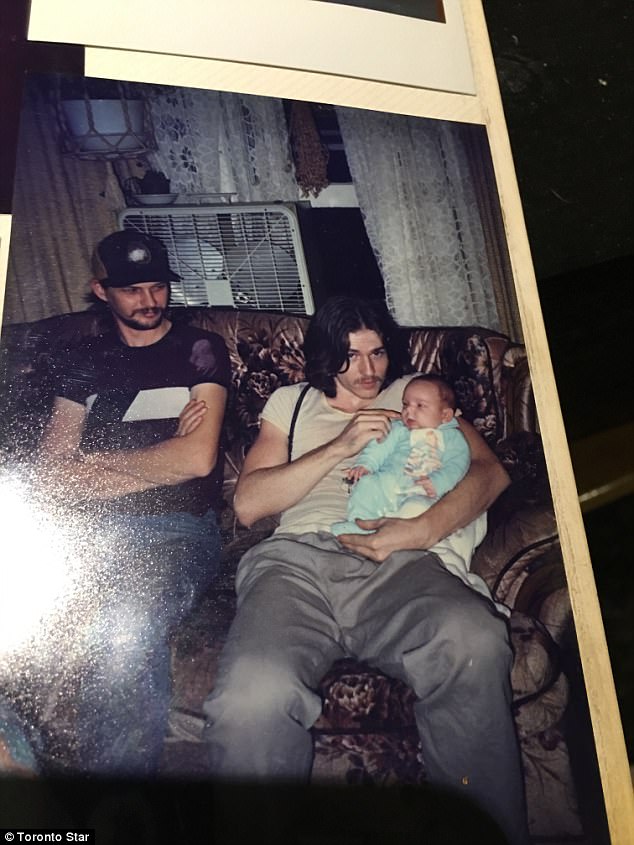 In 1993, Bennett gave birth to a baby girl – only this time the father was a brother of Willett Sr.

A few months after the girl, Billie-Jean, was born, Bennett enlisted the help of her mother and decided to leave the house.

She said that after four years, she had reached her breaking point after enduring repeated beatings.

‘[Billie-Jean] was a baby and I didn’t want her around it,’ she said.

Bennett left, though she left her four-year-old son, Willett Jr, behind. They would not see each other or speak to one another for over 20 years.

After Bennett and Billie-Jean managed to flee, the Willetts moved again – this time to Etobicoke, a district in western Toronto.

Gary Willett Sr testified in court that he installed seven cameras in and around the home to monitor Goldrick, who was confined to a tiny space in the basement.

Police say Goldrick was cramped into small living quarters in between rooms, where he slept on a single box spring mattress.

The house was ‘very cluttered and dirty,’ according to police.

The only time Goldrick was allowed out of the home was to run errands like shopping for groceries or shovelling snow in the winter.

Goldrick said that running away was not an option.

‘They threatened me to be there,’ he testified.

‘They said, if you ever try to leave, that we’d put you in a mental institution. And I didn’t want that so I didn’t leave.’

Goldrick was also forced to hand over to the Willetts the monthly disability pension of $900 he received from the government.

He testified that Gary Willett Sr would at times beat him for no reason.

“Sometimes, while I was sleeping, Gary (Sr.) would come in and hit me for no reason, and I’d wake up and I wondered why he did this. But I never found out why,” Goldrick told the court.

Willett Sr would kick him and punch him in the ribs, chest, and head, according to Goldrick.

Goldrick says he was forced to eat dog food because he would be beaten by Willett Sr if he tried to take food from the refrigerator.

Willett Sr denied allegations that he beat or confined Goldrick. He said he used Goldrick’s $900 disability check to buy food and pay rent, and that he gave Goldrick money that was left over.

In 2012, Goldrick left the Willetts’ home and sought treatment at a dentist.

The dentist testified that Goldrick had teeth missing in his top and bottom arches.

Goldrick was also suffering from multiple cavities and infections as well as severe bone loss.

His condition was so neglected that more than half of his teeth’s roots were exposed.

Gary Willett Jr also testified about the hardships he experienced growing up.

He said he suffered from behavioral issues which resulted in multiple suspensions from school.

A number of doctors prescribed him Ritalin as well as other medications.

In 2012, Gary Jr ran away from home. It was then that he began to communicate with relatives who suggested to him that Willett Sr may not be his biological father.

‘[The Willetts] denied it, and handed me a baby book, and said I was theirs,’ Gary Jr testified.

One day, Gary Jr and a friend spotted Goldrick on a sidewalk as he was returning to the Willetts’ home.

‘And we said, “Listen, Tim, if you want out and you want a better life, then you come with us now”,’ Gary Jr said on the stand.

He said that Goldrick was so scared at the prospect of running away from his alleged captor that he started shaking.

‘I just told him, “Tim, this is the time”,’ the friend testified. 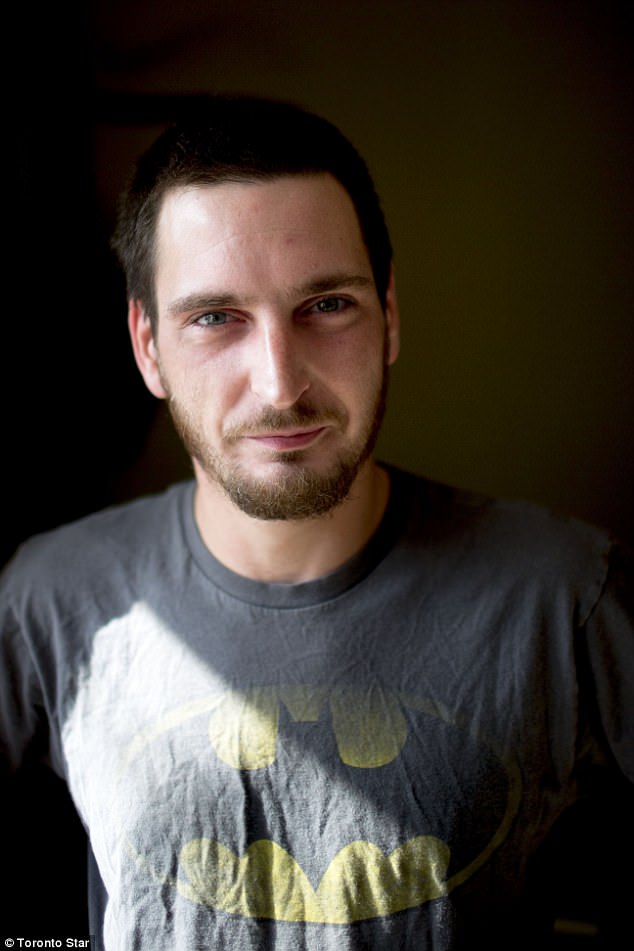 Gary Willett Jr grew up not knowing that his biological father was Tim Goldrick, the man who the Willetts allegedly abused, stole from and confined to their home for more than two decades

‘And I told him, like, “I need to go. I’m in the middle of Islington Road with my four-ways on. It’s either now or never”. And he got in the car.’

Two years later, Gary Jr reached out to Billie-Jean, his sister who didn’t even know he existed.

Gary Jr wanted his mother, Barbara Bennett, to come forward to authorities and to reveal what happened to them.

Billie-Jean, who was 24 years old at the time, was learning about her family’s past for the first time.

‘When I first heard it at four in the morning, I didn’t quite believe it. I had to hear it out of my mom’s mouth,’ she said.

Not long after that initial phone call from her brother, Billie-Jean and her mother met Gary Jr in the parking lot of a Toronto police station.

It was there that Bennett gave a statement.

Gary Jr also alleged that he was beaten by the couple that claimed to be his parents.

‘They said “I love you” every night, but if you hit me, if you continuously slap me, I don’t believe it,’ Gary Jr said.

‘I don’t know if I will be able to reconcile with my kids over this, and that’s the saddest part of it all,’ Willett Sr testified in court.

He says that he has stopped speaking to Bennett, his biological mother who is also 56 years old, because she hasn’t given him answers about his life.

‘I think about why it happened, why is my life like this?’ he said.

‘How is someone stolen as a child and everything is OK? Not once did my real mother go looking for me.’

Meanwhile, Goldrick says he is happy to be working, earning a wage, and being able to buy some possessions, like a mountain bike and a stereo.

‘I can go out now and make money. I’ve got a newspaper job that I do. I deliver the flyers. I can do that and it makes me feel good to know I can do stuff like this.’

Nonetheless, he says he is still haunted by his traumatic past.

‘I take pills for the shakes and nighttime pills for sleep,’ Goldrick said.

‘I have nightmares because of this.’

Maria Willett’s attorney told The Toronto Star that his client is currently being evaluated to see if she is mentally fit to stand trial.

‘Anything that’s said about her has not been tested by cross-examination or by presentation of defence evidence,’ the attorney, Daniel Kayfetz, said.