Couple offer £39,000-a-year for a nanny who can help their daughter, eight, become a YouTube sensation

By Julia Atherley For The Mail On Sunday

A couple are offering a £39,000-a-year salary for a nanny who can help their eight-year-old daughter become the next YouTube sensation.

The successful applicant will not only be experienced in child care but must support the youngster as she records, edits and publishes her videos online.

Nannies who already have a ‘successful social media account’ or a ‘good digital portfolio’ are especially encouraged to apply, say the parents, a lawyer and an IT director who live in East London.

The unnamed couple admit they have ‘no idea’ how to help their daughter with her vlogging ambitions. They say making videos is the only pastime to have kept their daughter interested ‘for longer than a couple of weeks’.

A seven-year-old boy who reviews toys has topped a list of the highest-earning YouTube stars after making £17.2 million. Ryan, from Ryan ToysReview, (pictured above) made the hefty sum for his online reviews between June 2017 and June 2018

In their job ad on childcare.co.uk, the couple say their aim is for their daughter to become a YouTube star within two years. They reveal that the girl already has her own YouTube channel, where she uploads videos of herself doing make-up tutorials and singing.

‘Our beautiful little girl is such a natural in front of the camera,’ say the parents, who admit that the videos she makes are ‘in need of polishing up’.

Alongside the digital duties of the 30-hours-a-week role, the nanny will need to help their daughter get ready for school, pick her up afterwards and make her dinner before the parents return from work at 7 p.m.

Despite the parents’ ambition, YouTube has a minimum age requirement of 13 and told The Mail on Sunday that they ‘terminate thousands of accounts per week’ to enforce this policy. However, many younger children often use a parent’s account to access the platform and bypass the age restriction. 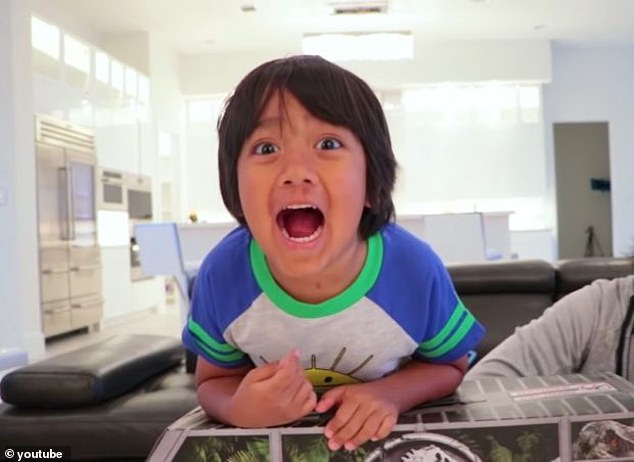 The girl already has her own YouTube channel, where she uploads videos of herself doing make-up tutorials and singing but her parents want a nanny who already has a ‘successful social media account’ or a ‘good digital portfolio.’ Ryan, from Ryan ToysReview, (pictured above) topped a list of the highest-earning YouTube stars after making £17.2 million

Paying a £25-an-hour salary to a tech-savvy helper could be a wise investment for the parents. Last year, seven-year-old Ryan of ‘Ryan ToysReview’ became the world’s highest paid YouTuber by earning £18 million on a channel set up and overseen by his parents. Videos show him putting toys through their paces, and the channel has more than 21 million subscribers.

Richard Conway, founder of childcare.co.uk, said: ‘In our modern world where you can find a YouTube video for just about anything, it’s no wonder the kids of today find content creation an attractive hobby or even career choice.

‘Technology is such a big part of life and, if I’m perfectly honest, I’m surprised we haven’t had a similar request before now. Even if people don’t agree with this, it shows the parents’ dedication to helping their daughter’s dream come true, and if it doesn’t work out, at least the child is learning some pretty invaluable digital skills.’