A couple from Florida completed an epic feat of riding all 46 attractions at the Walt Disney World theme park in Orlando in a day.

Shane Lindsay, 45, and Kristina Hawkins, 31, completed the Parkeology Challenge on Wednesday which saw them tackle everything from Space Mountain in the Magic Kingdom to the Frozen ride at Epcot and finished the challenge in 18 hours. They documented their magical day by taking a selfie at each ride.

But what made their achievement all the more remarkable was the fact they lined up like everybody else for the attractions and didn’t use a single FastPass or MagicBand which can be used to jump the line.

Shane Lindsay 45, and Kristina Hawkins, 31, took 18 hours to ride all 46 rides, but they started with the Main Street Vehicles when their day began on Wednesday just after 8am 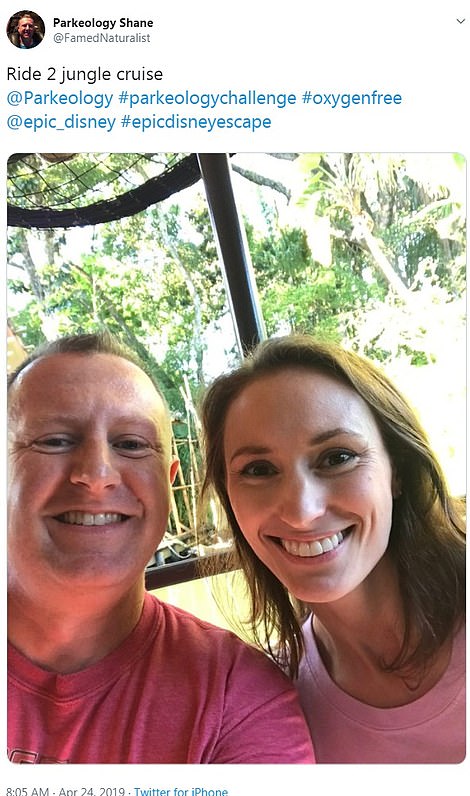 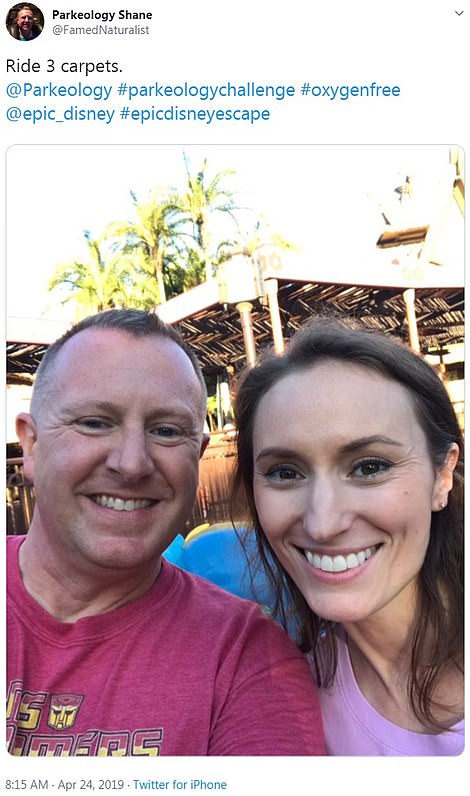 The pair completed the challenge without using a single FastPass. They are pictured here on their second ride of the day, the Jungle Cruise, left, and the magic carpet ride, right

The day began at 8am at the Magic Kingdom with the couple riding down Main Street USA in one of the vintage vehicles.

Some 18 hours later, their day ended with the pair still at the Magic Kingdom riding the Seven Dwarfs Mine Train just before the entire park closed at 2am on Thursday.

The pair covered all four of the Orlando parks consisting of The Magic Kingdom, Epcot, Disney’s Hollywood Studios and Disney’s Animal Kingdom according to the Orlando Sentinel.

The Parkeology Challenge was actually ‘invented’ by Shane along with his friend Ted Tamburo. The objective is to ride all the open rides in a single day and sign-up and register your efforts on the Parkeology website.

Shane and Kristina have completed this marathon stint before, however this is the first time they have managed to complete the task without using the line-jumping aids.

It meant they had to wait in the queue for some time at certain attractions. 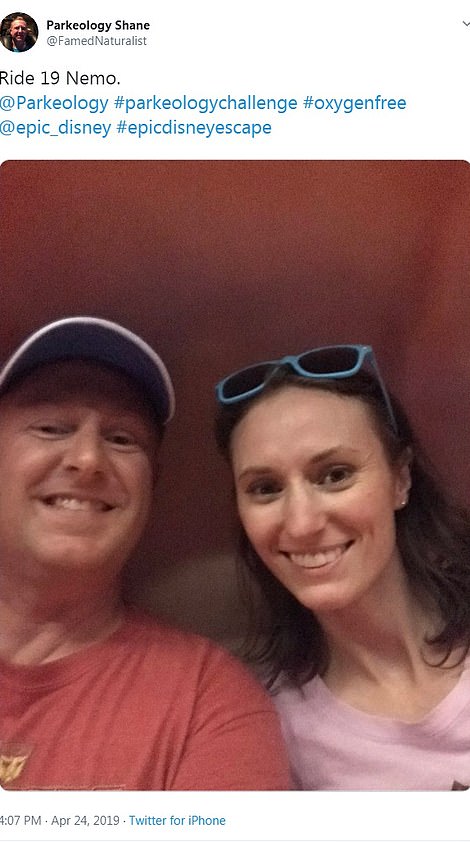 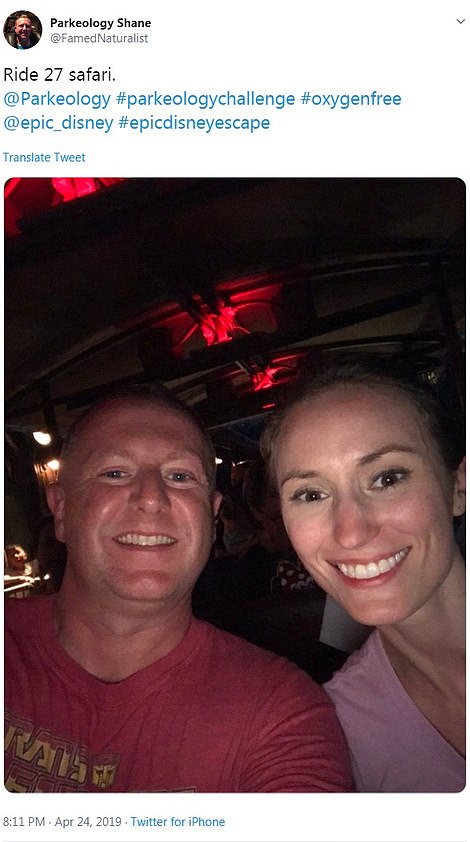 Finding Nemo was the 19th ride of the challenge. A Safari at Animal Kingdom was their 27th

Animal Kingdom’s Flight of Passage was the longest wait the couple endured where they had to line up for an hour.

The couple say they wanted to complete the challenge before Star Wars: Galaxy’s Edge opens later this year and massive summer crowds pack the parks.

A lot of factors can affect the success of the day. The number of rides that are open can vary as well as when Disney places certain ones under refurbishment.

On any given day, anywhere from 45 to 50 rides could be in operation.

Challengers would normally spend time on their phones looking at wait times for the various rides before trying to score FastPasses to cut the line, but this time the pair wanted to go through the entire day without using a single one. 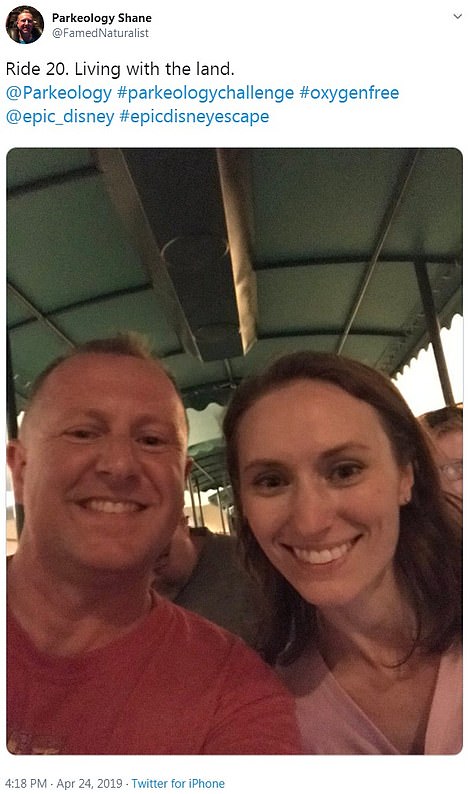 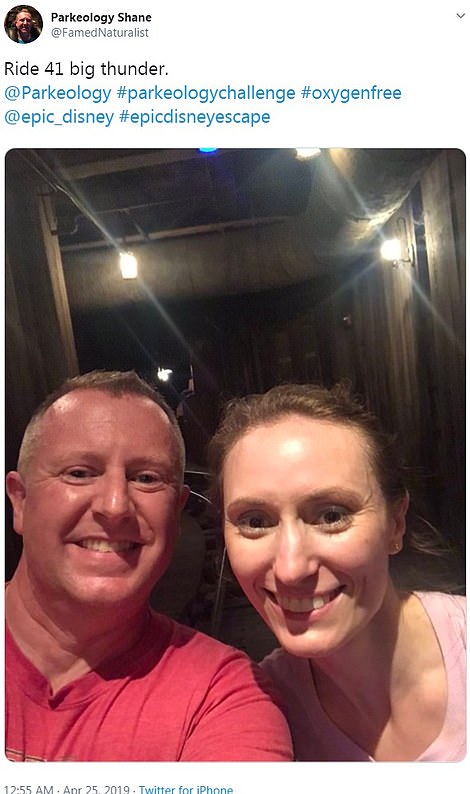 Living with the Land at Epcot made for a serene boat journey, left, while a roller coaster for ride 41 ensured the couple stayed awake on Big Thunder Mountain Railroad 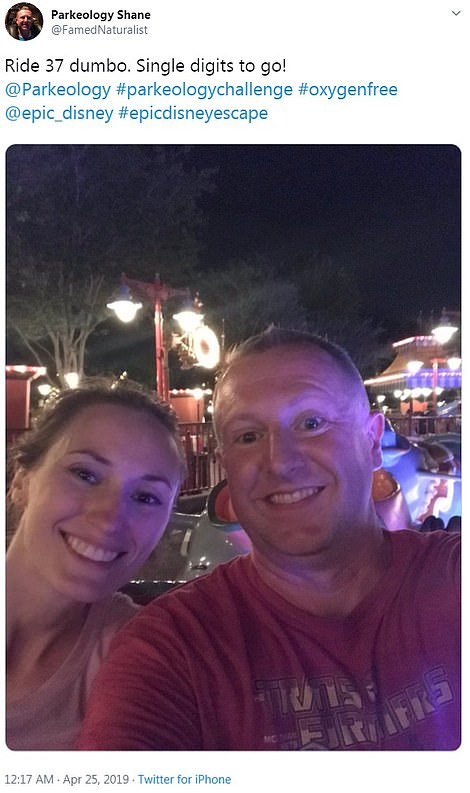 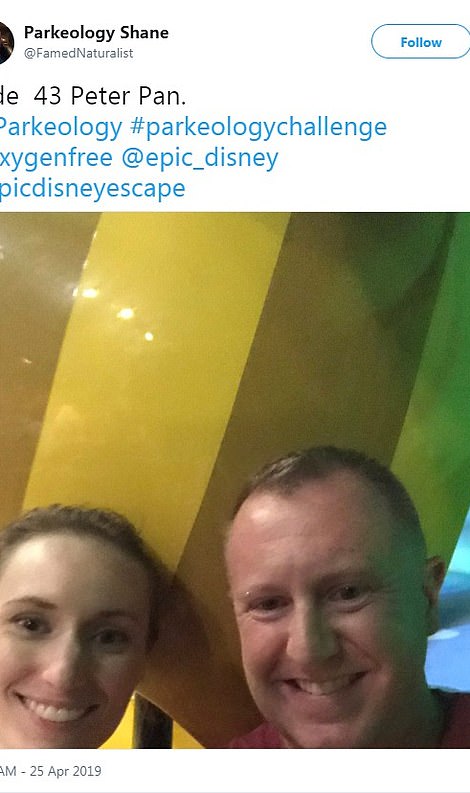 Even big kids can enjoy Dumbo, their 37th ride, while fantasy continues with Peter Pan at 43 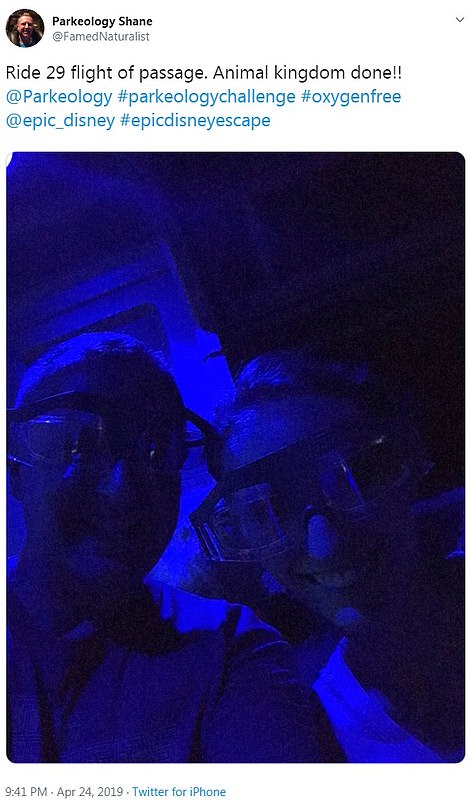 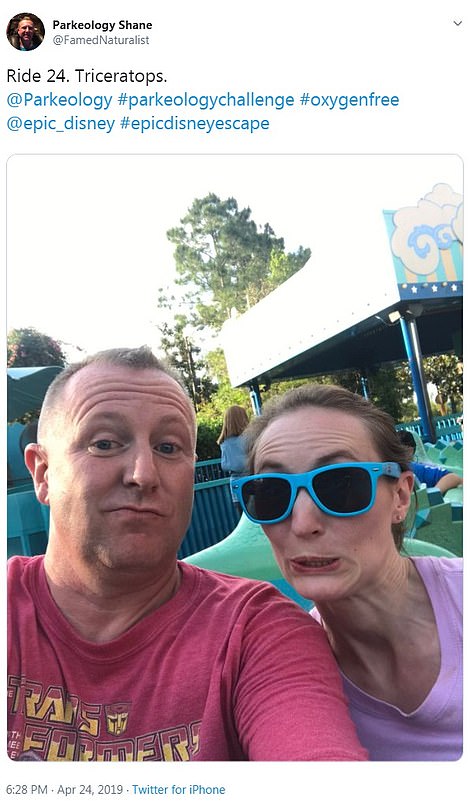 The longest wait of the day was for Flight of Passage at Animal Kingdom, pictured left, but the pair say most of the others went by quickly

Most people who complete the challenge finish in at least 17 hours if they used line-jumping passes. Many, if they try, can hit every ride in 18 without them.

‘It seemed like something really crazy to try and do this,’ Shane said. ‘In some ways, it felt not purer, but a little more old school.’

‘My friend Ted and I created this,’ he said to WESH. ‘We were the first to complete it. And since that time, we’ve just had an amazing response from the online Disney community, people excited to try this challenge.’

‘We did believe it was possible, but we knew things had to go right as well,’ Shane said. 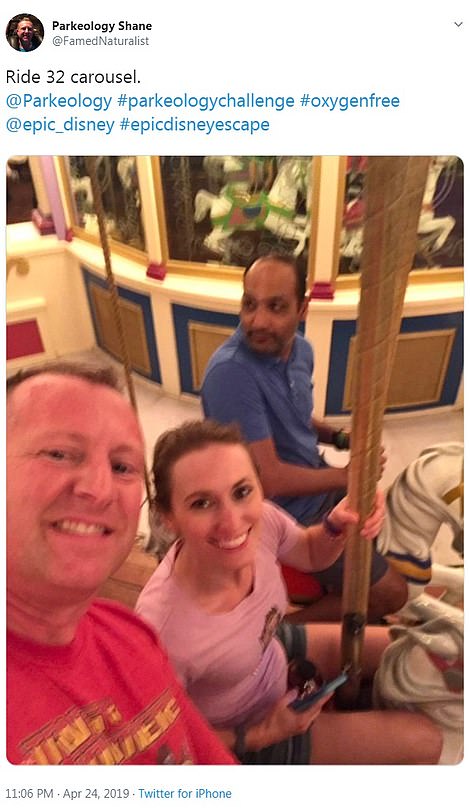 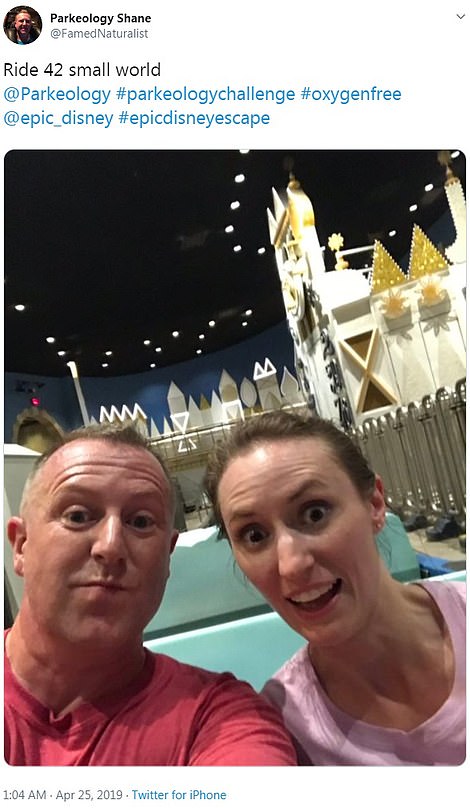 A simple carousel was the couple’s 32nd ride, while the always hummable Small World was 42 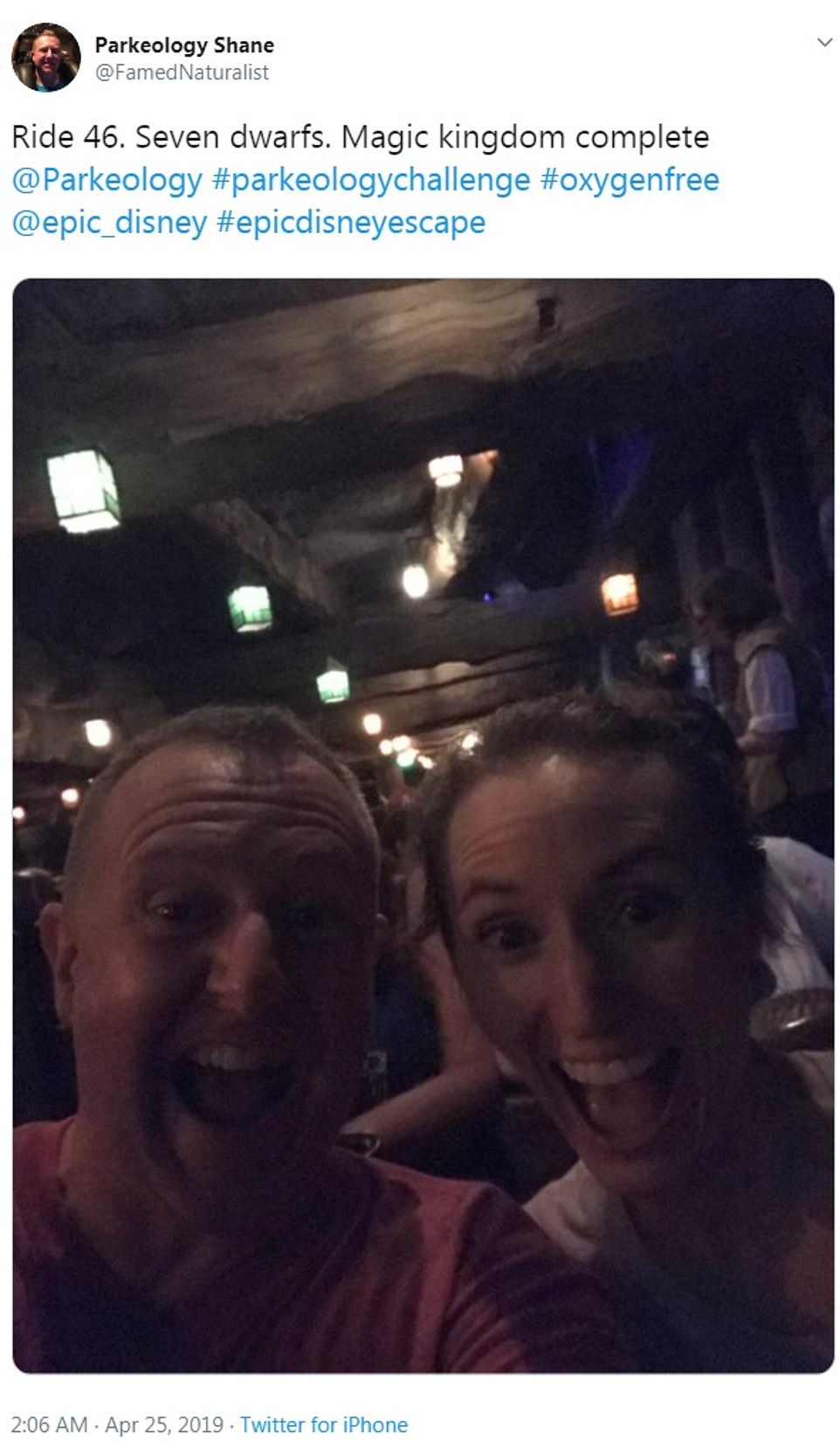 They did it! 18 hours after their day began at just after 2am their 46th ride ended with the Seven Dwarfs Mine Train 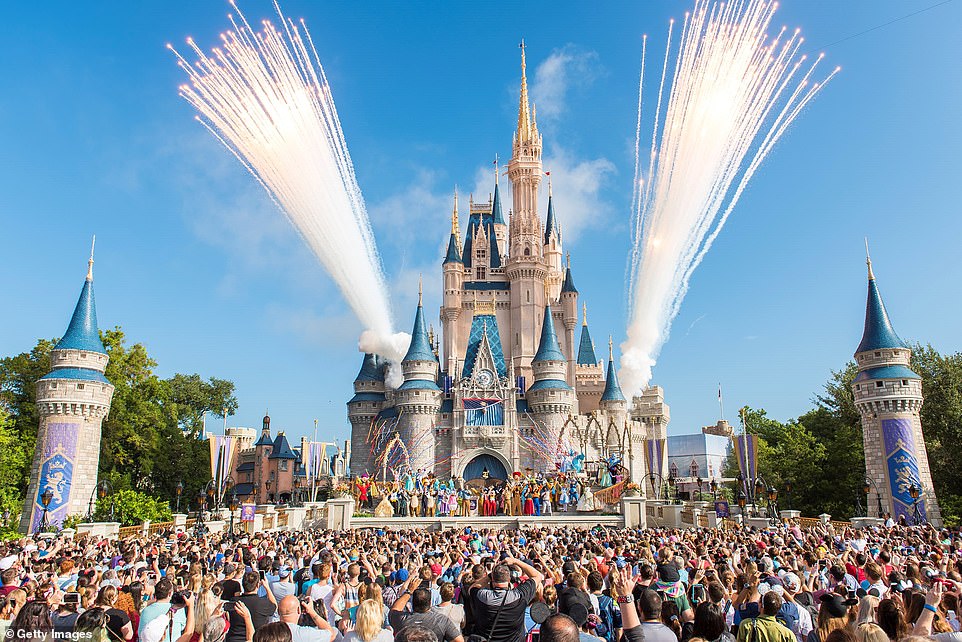 The couple have shared their tips on how to effectively cover all 46 rides in a day (but with FastPasses): 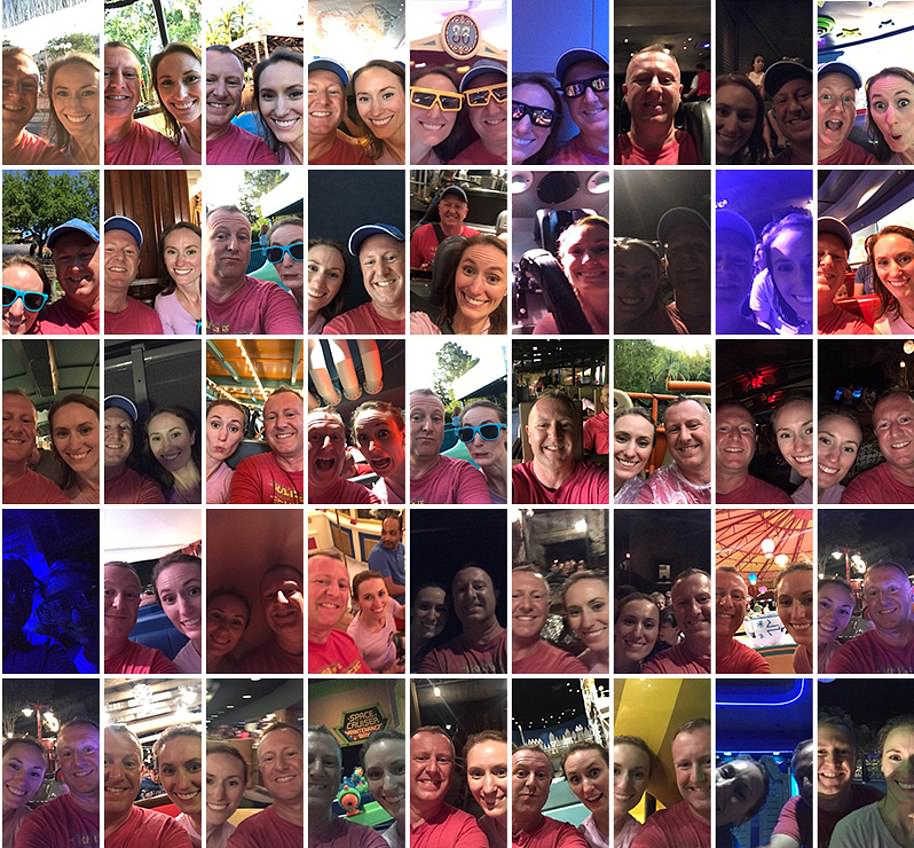 The couple managed to ride all 46 rides without using FastPass or Magic Bands to jump lines. It took them almost 18 hours in total to ride them all

Disney Hollywood Studios only has 6 rides