Couple, 88 and 91, who have been married more than 60 years emerge from hospital after beating coronavirus together

A couple who have been married for more than 60 years have emerged from hospital together after they both beat coronavirus.

Gillian England, 88, and her 91-year-old husband Michael were discharged from Leicester Royal Infirmary on July 17 after spending three weeks being treated for coronavirus.

The couple, who married 61 years ago, supported each other during their stay in the hospital.

Michael and Gillian England, 91 and 88 respectively, were discharged from Leicester Royal Infirmary on July 17 after spending three weeks being treated for coronavirus

Laura Lomas, a sister on ward 36, said Mr England would get himself up and dressed each morning before the therapist teams arrived so he made sure he was able to pass by his wife as he took his exercise.

Meanwhile Mrs England would ask how her husband was and when he arrived at her bedside they would sit and hold hands over a cup of tea.

Hospital staff also ensured the couple eat their meals together.

Speaking after being discharged from hospital, Mr England said: ‘I want to get better so I can look after my wife – first and foremost, I want to be there for Gillian. 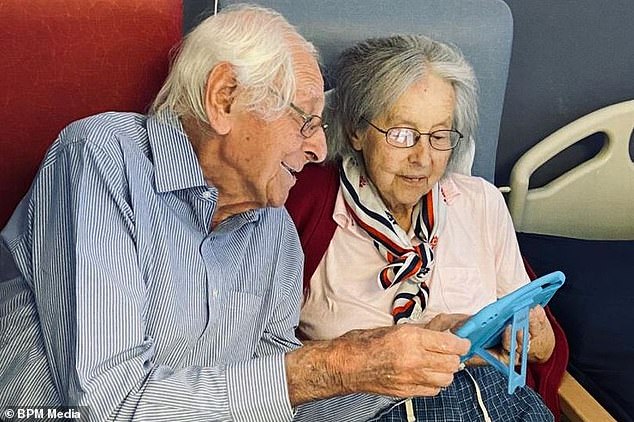 The couple, who married 61 years ago, supported each other during their stay in the hospital

‘While I’ve been in hospital I’ve not really missed anything because Gillian is here and I have been able to see her every day.

‘Being discharged together, on the same day is even more special as we have been on our recovery journey together.’

One of the couple’s sons, Russell, said that his father Michael had an ‘especially rough old time with the virus’.

At one point Michael had been given only 48 hours to live and had contacted his three sons to say goodbye but unbelievably he recovered. 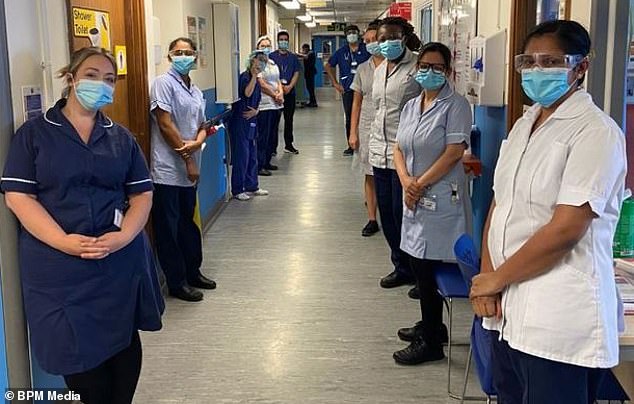 All clear: Staff line a corridor at the hospital to say goodbye to Mr and Mrs England who continue to recover from the virus at home in Leicester

Mr England thanked the healthcare workers at the hospital who worked hard to make sure that the couple, who live in Leicester, were able to be treated on the same ward.

He added: ‘Kindness goes such a long way.’

One of Mr and Mrs England’s three sons arrived on Friday to collect the couple and offered gifts for the staff members who had cared for them.

The inspirational couple continue to recover at home.