Couple are ordered to chop down their 40ft lime, horse chestnut and conifer trees after their neighbour complained they were stopping her washing from drying and left her garden in darkness

A couple have been ordered to chop down their 40ft trees after a neighbour complained they stopped her washing from drying and blocked out the sunshine.

Michael and Val Pace have been locked in a battle with Carol Kilpatrick over mature trees that separate their properties.

The row centres on an area in the Pace’s garden in Helensburgh, Dunbartonshire, where a number of lime, horse chesnut and conifer trees sit.

The dispute has seen attempts to reach an amicable settlement between the neighbours fail and officials intervene.

Michael and Val Pace have been ordered to cut their 40ft trees in Helensburgh, Scotland, to no more than 6ft. Pictured are the trees from the Paces’ side

Miss Kilpatrick turned to Argyll and Bute Council to force Mr and Mrs Pace to take action after she claimed the trees left her garden in darkness.

Council officials backed her and ordered the trees be cut to a maximum height of 6ft.

Mr and Mrs Pace have now turned to the Scottish Government in a bid to halt the action which they say will result in the trees resembling ‘Easter Island’ statues if reduced in size.

In a letter to the government, they said: ‘The area in question is a conservation area but there are no signs that the council have taken account of this to minimise the environmental impact of its proposals.

‘They appear to propose the wholesale butchering of part of our garden which will significantly reduce our privacy.

‘Miss Kilpatrick’s back garden is about 1.4m higher than the base of our plants/shrubs/trees so if the trees are reduced to 2m tall we will effectively have a 0.6m barrier between the properties. 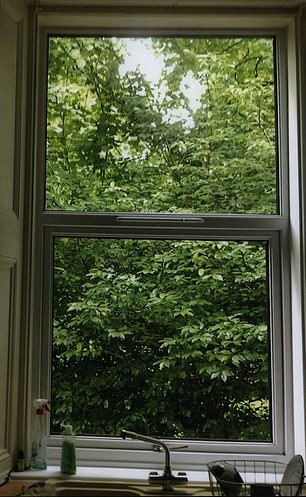 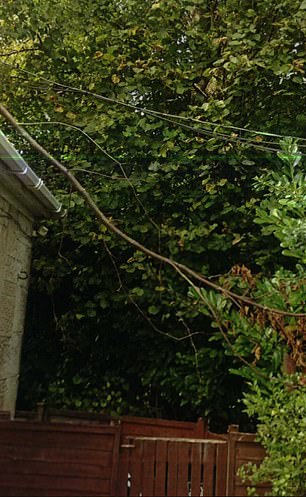 Neighbour Carol Kilpatrick complained about the trees saying they blocked light from the kitchen, left, and stopped her washing from drying when hung outside, right, in the garden

‘We know that this is taken account of in the High Hedges Act however the council has the authority to increase the 2m height when appropriate.

‘Some of the trees have a girth of 1.7m plus and at 2m high are going to look like a poor man’s Easter Island.’

Miss Kilpatrick told council bosses she only moved into her ground floor home last year but had encountered problems with the trees.

She said: ‘It is blocking out the light both to my neighbour on the upper floor and the ground floor kitchen and bedroom to the back of the building.

‘Also when in the kitchen I have to turn on the light to see what I’m doing.

‘When sitting in the back garden when the sun comes round in the afternoon because of the very high trees there is very little light gets through so I’m unable to enjoy my back garden. 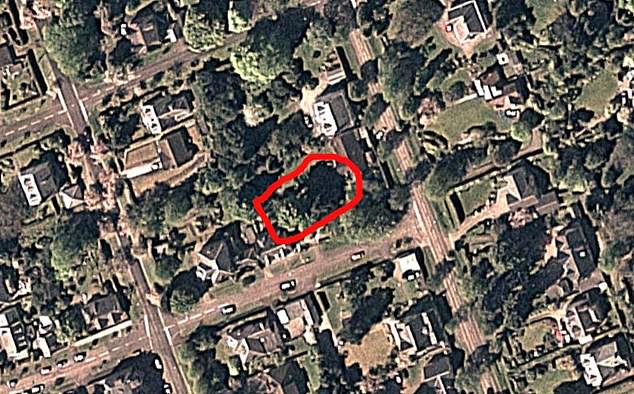 The Paces have turned to the Scottish Government in a bid to halt the action after council officials wrote to them saying the hedges and trees, circled, should be reduced to 6ft

‘(There is) insufficient light coming through to be able to dry my clothes on the clothes line.’

Council officials had written to the neighbours last month confirming they were issuing a high hedge notice.

They said: ‘It is considered that the height and distance of the hedge from the applicant’s property is such that it causes an impact on daylight and sunlight as demonstrated in the applicant’s submission and an officer site inspection.

‘With this in mind it is considered that the owner of the hedge should have until Friday 1st March 2019 to reduce the height to 2 metres (6ft).’

A government reporter will issue a decision in due course.