Clare and Aubrey Fry, pictured outside their shipping container they have been living in for three years, with their dog Morgan

A couple saved thousands after quitting the London rat race to live in shipping containers for three years so they could build their dream business in the Welsh countryside.

Clare and Aubrey Fry abandoned the hustle and bustle of London life to rent out canoes from their riverside base in Hay-on-Wye, Powys.

But with property prices at a premium in the picturesque town – famed for its many bookshops and annual literary festival – the pair faced squandering cash on costly rentals.

Instead the couple- who met in 2008 through mutual friends- spent just £15,000 on two shipping containers – and have sold them three years later for a tidy profit.

Clare, 34 said: ‘City life is full of opportunity but the pace and expense weren’t for us. We were sure there were opportunities here in Hay, with a more relaxed and affordable way of life to boot.’

Aubrey was running a motion capture studio in the capital and designing software and computer games.

As Aubrey, 37, grew up in Hay-on-Wye and with his mother owning a farm on its outskirts, the couple naturally gravitated to the Welsh border town for weekend getaways.

Clare said: ‘We’d leave London as early as possible on Friday afternoon to beat rush hour, spend the weekend here, and leave at 5am on Monday morning to go back to our jobs.

‘We realised we didn’t want to be in London long term. You’d go to the butcher or the market, and find all their best produce was sourced from the Wye Valley – where we really wanted to be.’ 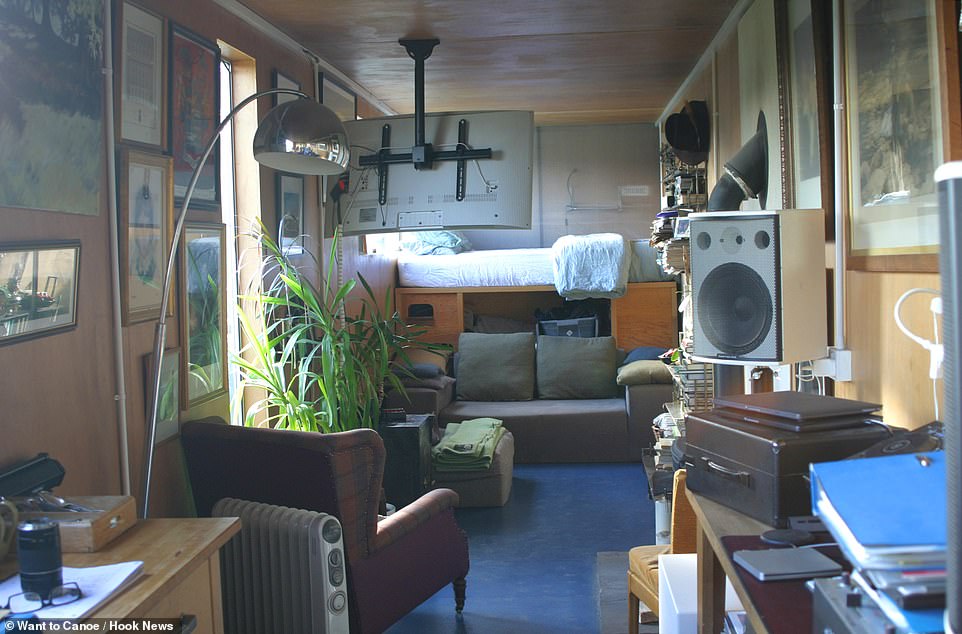 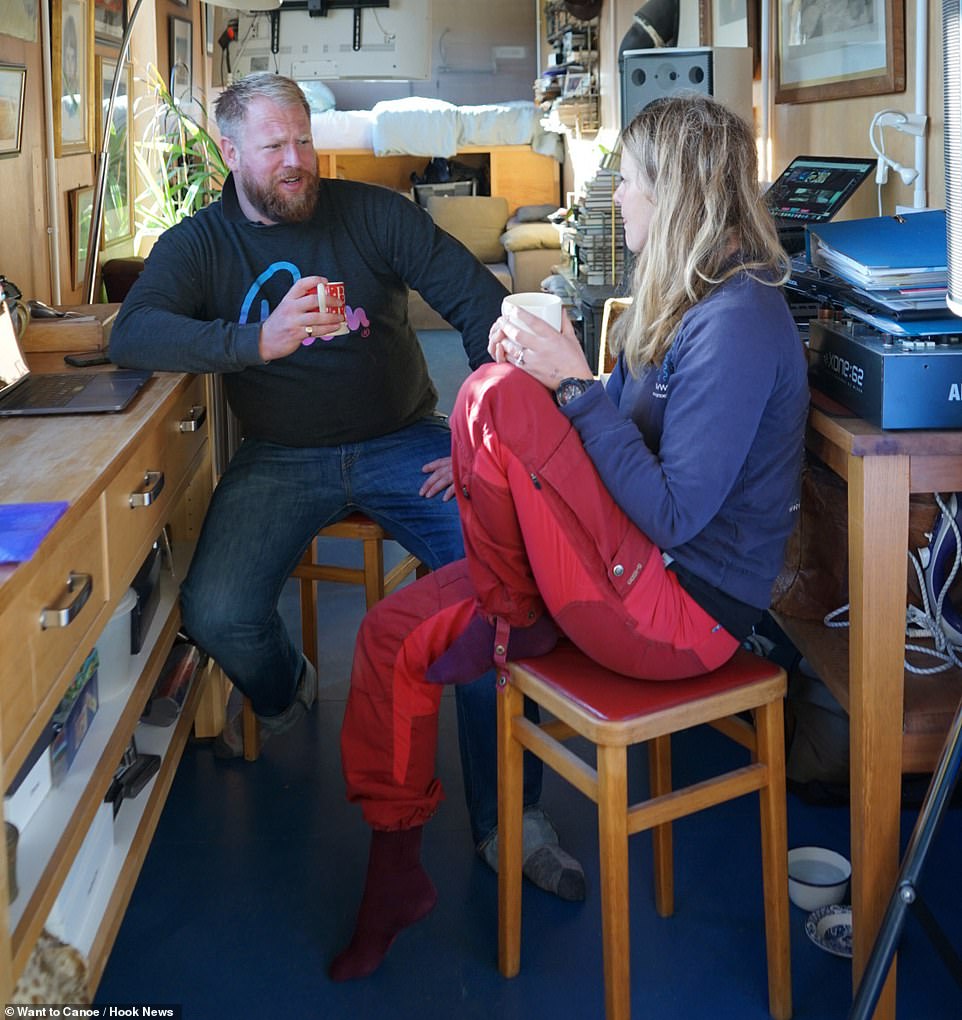 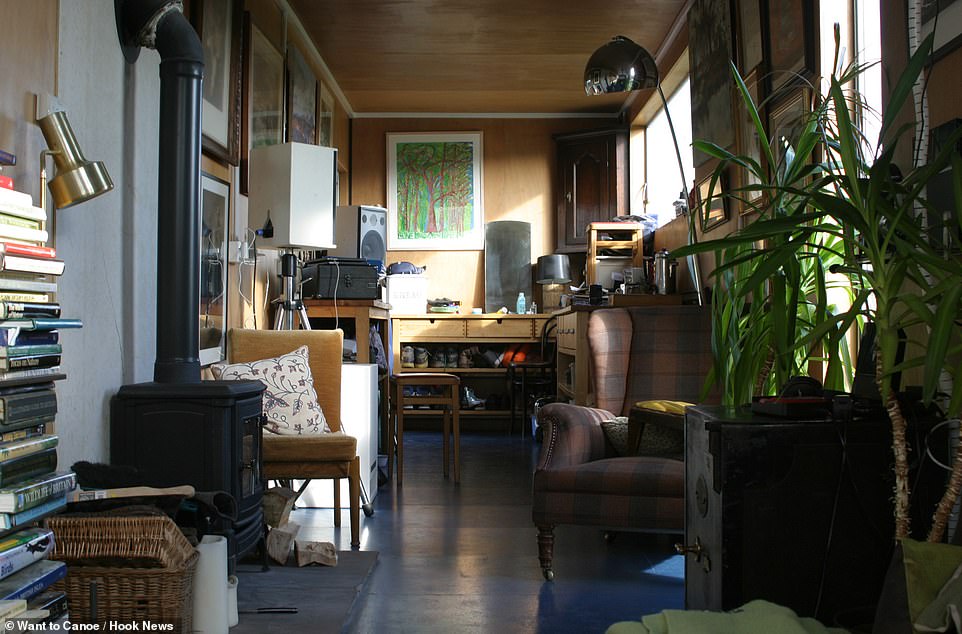 The 40ft shipping container has made a cosy, compact and cost-effective home for the couple, who quite the rat race to build a business in rural Wales 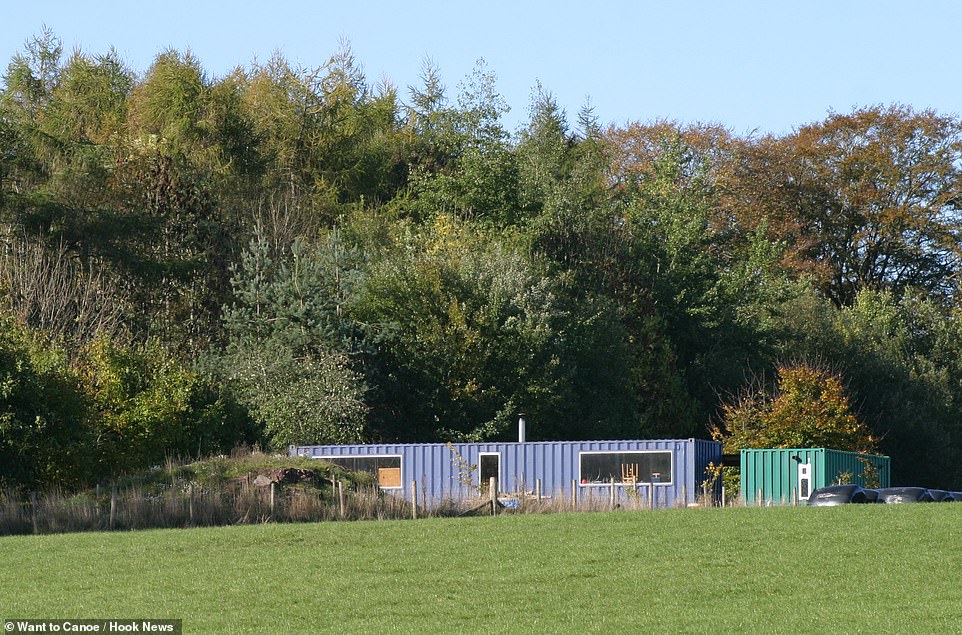 Clare and Aubrey Fry’s shipping container home nestles among woodland beside the river Wye in rural Wales. The couple quite the London rat race to start a canoe hire business 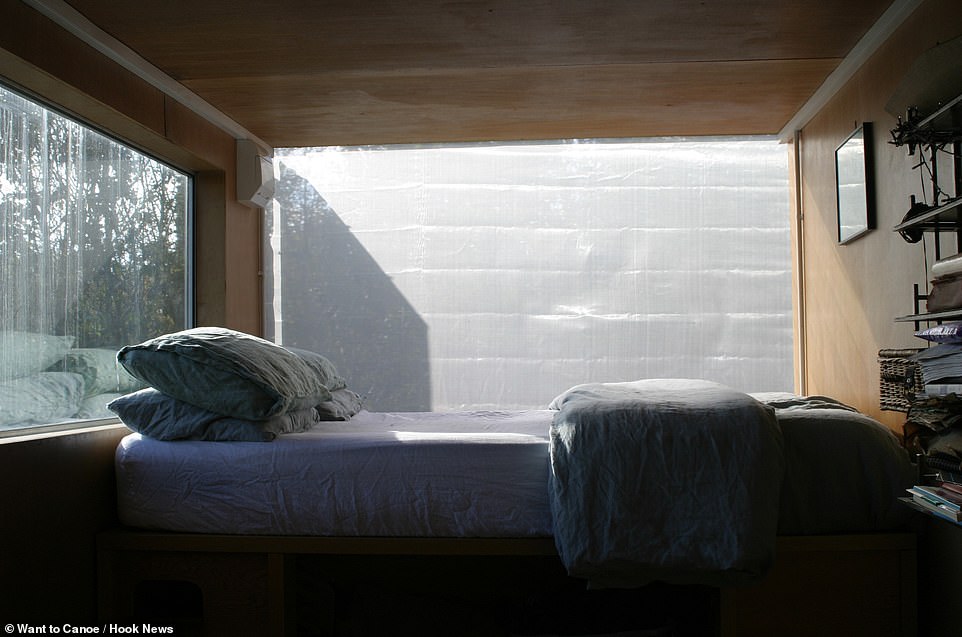 The shipping container has a raised double bunk bed. The floor to ceiling double doors of the container open out for an al fresco sleeping experience in the warmer summer months. The insect netting, pictured, can keep out unwanted intruders

They stumbled on an opportunity to buy a canoe hire business from a local retiree in December 2013 and rebranded it as ‘Want to Canoe?’

‘We talked and talked about it, and initially thought it would be a part time thing that we’d do alongside actual jobs, but it just took over.’ 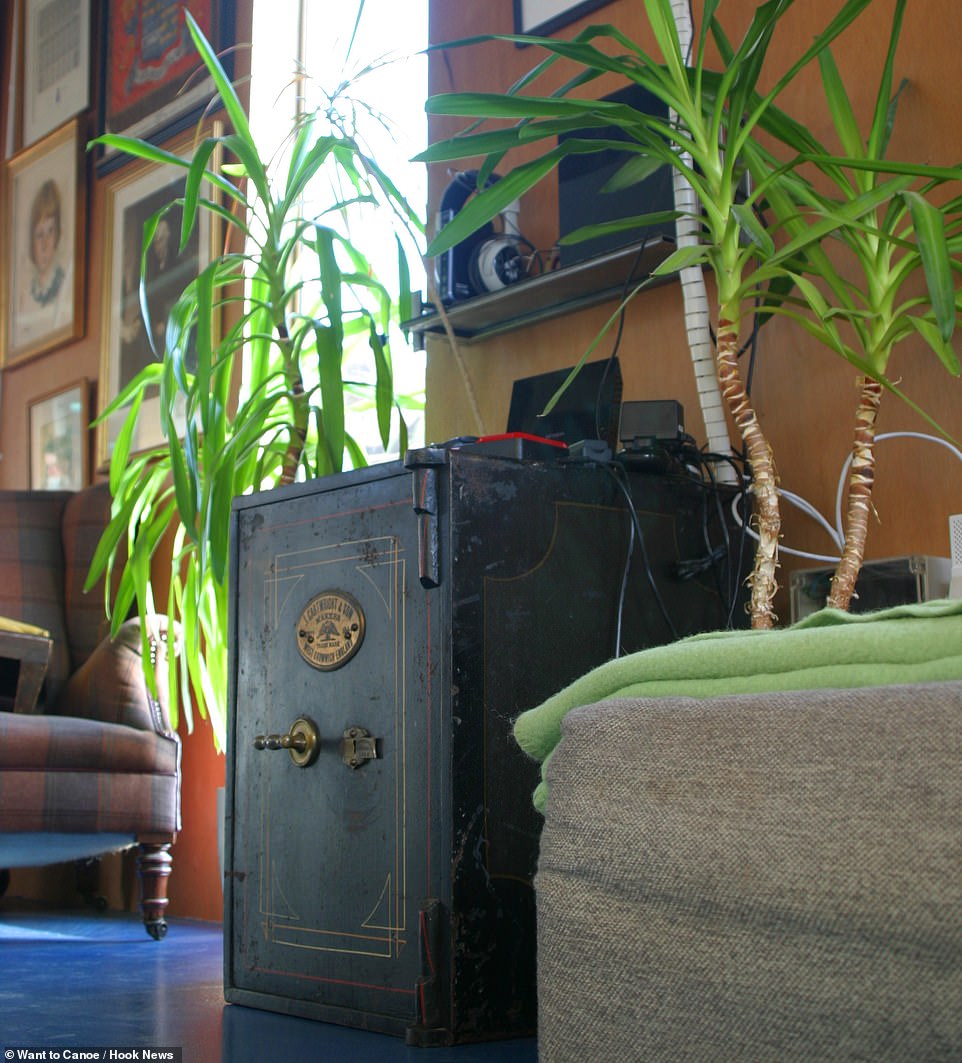 The Fry’s have turned the containers into an eclectic and cosy hom. The two units are sited on land belonging to Raquety Farm, just a stone’s throw across the field to Want to Canoe’s HQ on the banks of the River Wye 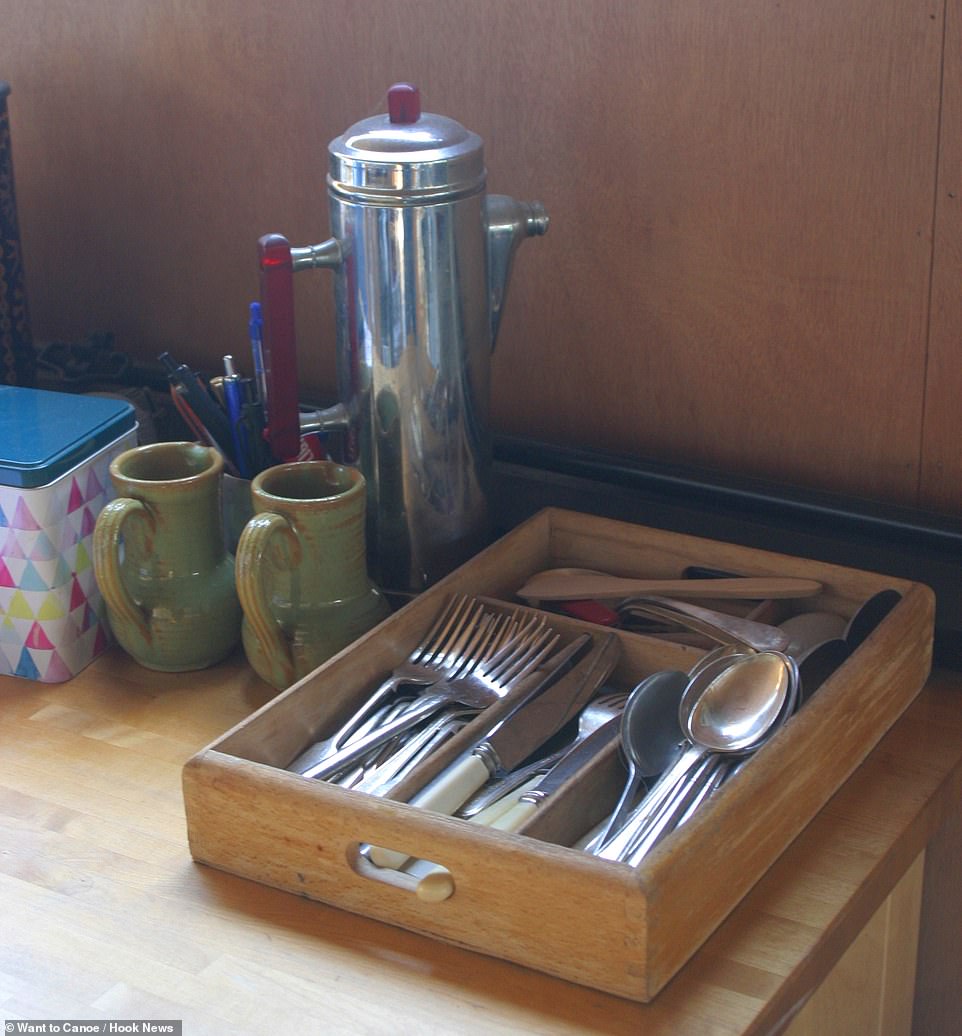 The couple reduced clutter to a minimum and got rid of many of their personal possessions. The seperate 20ft container is fitted out with electrics and provides a kitchen, bathroom and shower 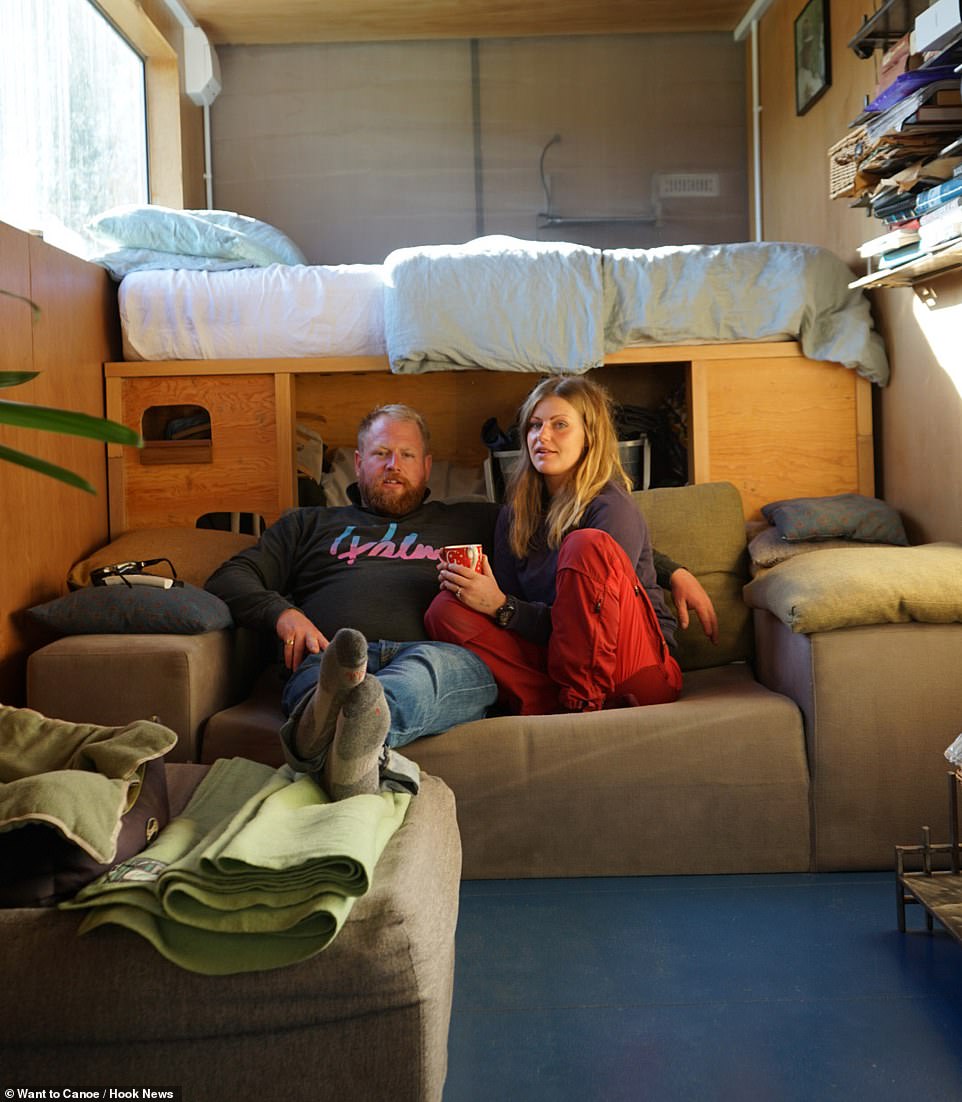 The couple relax on the sofa with a cup of tea. They have now sold the containers and are due to move into a new-build eco-tourism development which has been three years in construction

As they ploughed every spare penny back into the fledgling operation – which rents Canadian-style open canoes to day trippers paddling the River Wye – they hit on their novel accommodation solution.

In 2015 they moved into their semi-converted 40-ft ‘high top’ container, which houses an open-plan living space heated by a wood burning stove, plus a sleeping area with a raised double bunk bed.

They paired it with a shorter, 20-ft container, and fitted it out with plumbing and electrics to provide a kitchen and bathroom, complete with washing machine and shower. 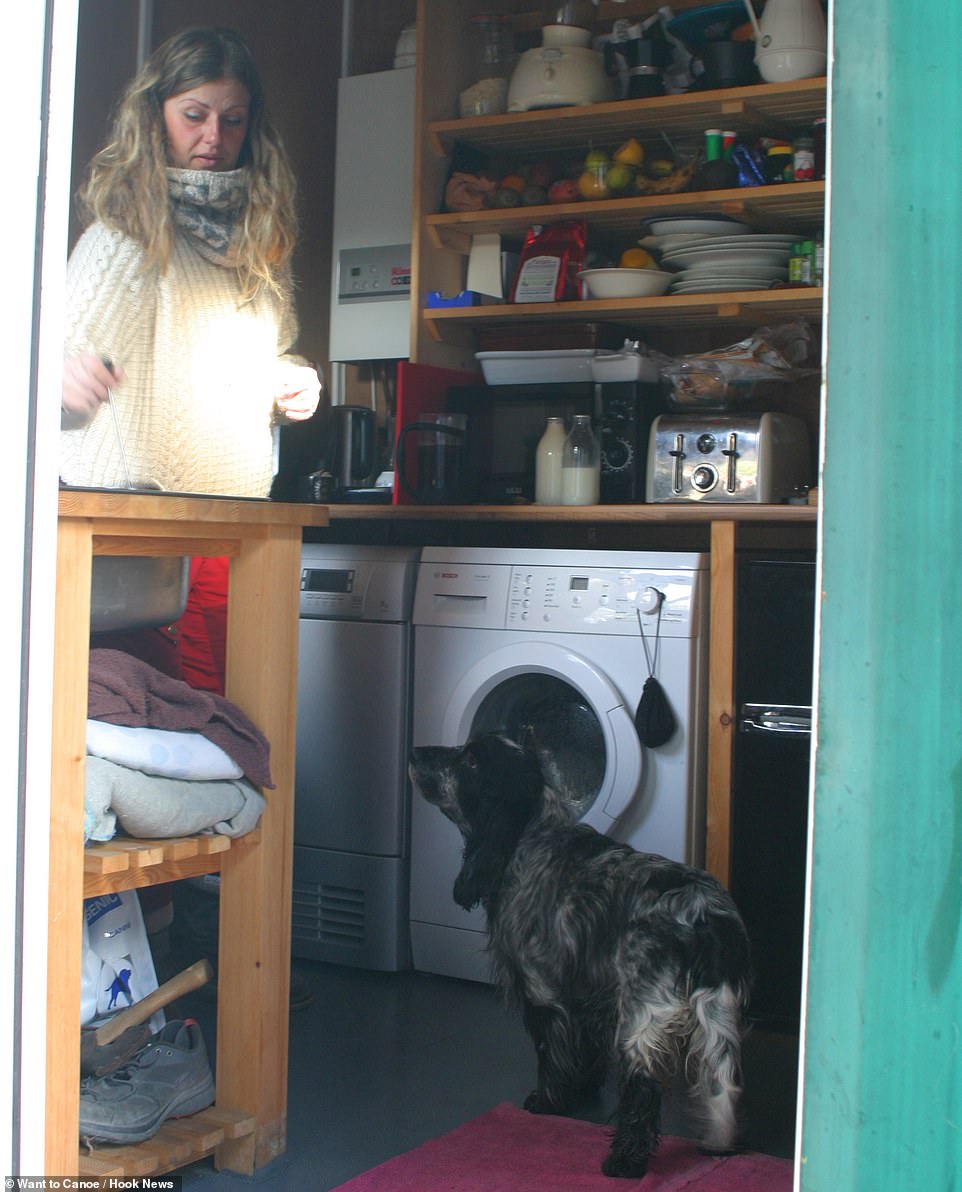 The separate 20-ft container houses many of the electrical appliances such as a washing machine. It also contains the bathroom and shower

The two units are sited on land belonging to Racquety Farm, just a stone’s throw across the field to Want to Canoe’s HQ on the banks of the River Wye.

Clare said: ‘We really wanted to be on the farm, close to the river and the business, but as a young couple we needed our own space.

‘We were putting everything back into the business, and buying or renting in Hay is expensive, so that wasn’t really an option.

‘Living in the containers has been fun, but challenging at times. There’s nowhere to hide if you fall out with each other and you have to get used to making such a small space work.

‘We threw and gave away a lot of our stuff. I can recommend it – it’s been very cathartic. You find out what you really need, and what really matters. 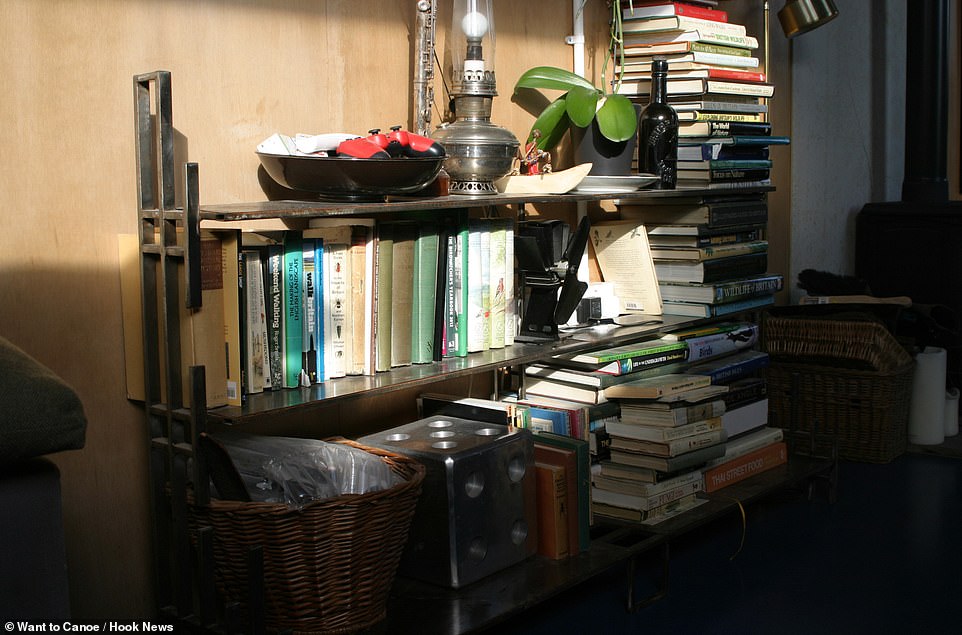 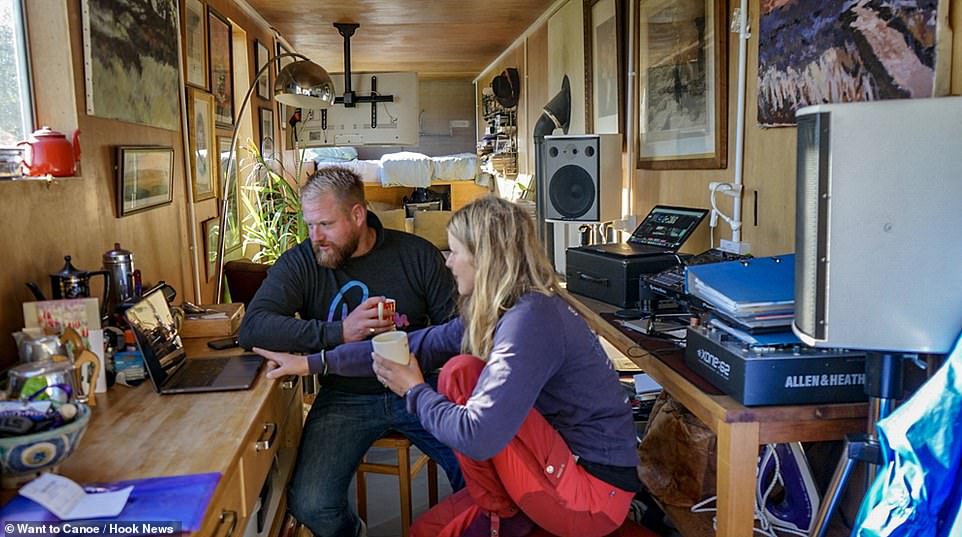 The new property the couple (pictured) and moving into will be overlooking the Wye and double as a new office headquarters, B&B and event space for the canoe business

‘We didn’t expect to be in the containers for as long as three years – maybe one, or two at a push, but they really feel like home now.

‘People are always surprised and amazed that we’ve managed to make such a small and unusual space work, but to us it’s just home. I’ll be sad to see it go.’

The containers are destined for a new home on the Isle of Mull in the Inner Hebrides in the Spring, after selling on eBay for £20k. 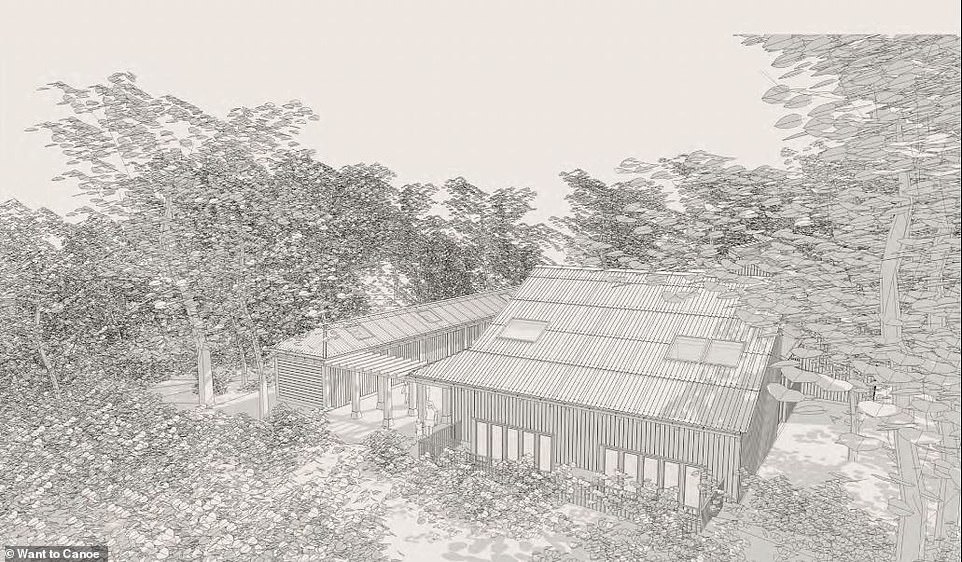 Meanwhile Clare and Aubrey are due to move into a new-build eco-tourism development which has been three years in construction.

The property, overlooking the Wye, will double as a new office headquarters, B&B and event space for the canoe business.

It is built from metal and timber frame and clad in Larch felled to make way for the building project, which includes a shower block, drying room and self-catering bothy.

The pair plan to add self-contained accommodation pods in the surrounding woodland.