A COUPLE set out to shame major supermarkets by keeping every piece of plastic used to wrap fruit and veg for two months.

Andrew Hanson and Anna Goodman then laid the mass of plastic across the kitchen floor and posted the image online.

Mr Hanson, 40, from Tooting, London, is seen in the picture holding up a sign which reads: ‘Two months. Pointless plastics.’

Some of the plastic wrapping, according to Mr Hanson is from Tesco and Lidl, but most is from Sainsbury’s.

Mr Hanson and Ms Goodman, 35, posted the image to Sainsbury’s social media page on November 16 with the caption: ‘This is just two months’ worth of supermarket plastic.

‘All of which could have been replaced with brown paper bags or wasn’t needed at all.

‘Most of this waste can’t be recycled: please, switch to paper and cardboard packaging.’

Speaking today, Mr Hanson said: ‘It’s a lot more than I expected. What really gets me is that all of this was unnecessary – for fruit and veg that could have been sold loose, and put in paper bags by the shopper if necessary. 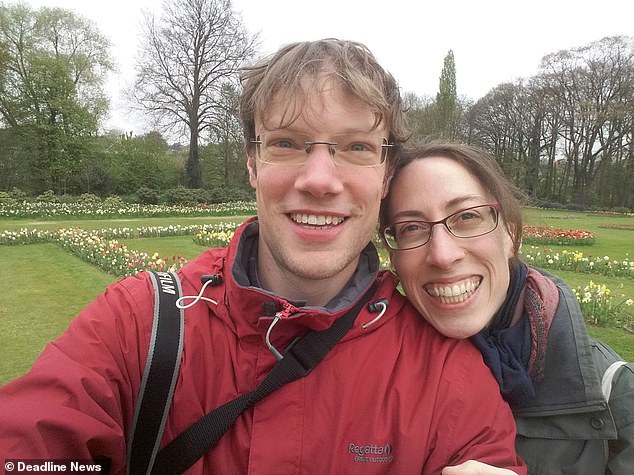 The couple, pictured, said all of the plastic in the photo is not recyclable at the kerbside

‘Nearly all the plastic came from Sainsbury’s Tooting, London, with some from Lidl or Tesco.’

He added: ‘Nearly all of the plastic in the photo is not recyclable at kerbside. That was just two months’ worth, September and October.

‘I started collecting it after Greenpeace’s plastic campaign made me aware of just how much plastic supermarkets generate every year – about 800,000 tonnes a year, apparently.’

They wrote: ‘We have investigated replacing these plastic bags with paper bags in the past but the same sized bags in paper take up 6 times more room.

‘At the moment we can get 9000 bags in our dispenser with a paper bag we can only get 250 paper bags.

‘This has the same increase for transport efficiencies and would take up 36 times more space as well as replenishment and storage in depot and store.’

Among those responding to the debate was Laura Jane, who backed Mr Hanson on Sainsbury’s social media page.

She wrote: ‘Better to slightly over clog the shelves with paper than massively over clog landfills with plastic, you would think. At least offer people the choice?’

However, not everyone was convinced by Mr Hanson’s post with Fraser Gibson posting on social media: ‘Yet you still bought it.’

And Jonathon Cowley-Thom added: ‘What calculations have you made regarding the CO2 emissions that would result from transporting billions of much heavier paper bags?’