A couple who have been together for two decades and were told they would never conceive have welcomed a baby after the dad ditched BREAD to improve his health.

Stephen and Rachel Greenwood, from Montgomery, Powys, were told by doctors that they would never conceive children together and even IVF would not work due to their medical conditions.

Rachel, 41, has polycystic ovary syndrome whilst Stephen, 55, suffered a twisted testicle as a teenager that left him with an extremely low sperm count.

The couple believed they would never become parents until a miracle happened after Stephen ditched bread 10 months ago in order to combat his diabetes.

His diabetes had left him suffering with yeast infections that could reduce his fertility even further, but after ridding his diet of all yeast products, the infections disappeared completely in just two weeks.

Five months after Stephen ditched the bread and pastries, Rachel couldn’t believe it when doctors revealed she was 21 weeks pregnant.

The excited couple finally welcomed the baby that they had to wait over two decades for on July 1 and are loving being parents.

Proud husband Stephen said: ‘My wife is absolutely ecstatic and I can’t stop crying every day. It’s just the most incredible feeling.

‘To think that I’m retired from the police and I can now spend every day at home with my baby boy is absolutely out of this world. 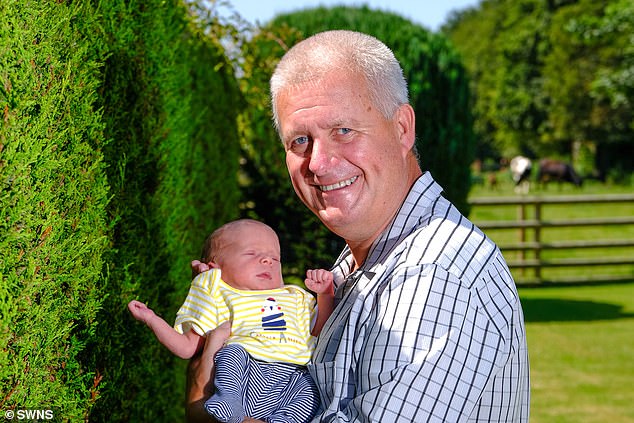 Proud husband Stephen said: ‘My wife is absolutely ecstatic and I can’t stop crying every day. It’s just the most incredible feeling’

‘I stopped eating anything with yeast in it in September, just cut it right out. Within two weeks, my infections had ceased, and five months later, my wife was pregnant.

‘It’s such a wonderful miracle, I want to get it out there and tell people not to give up hope. Everybody is different, our bodies change and you just never know.’

When retired policeman Stephen and senior careworker Rachel met back in 2000, both wanted to become parents but their individual health conditions made their dream of children appear to be an impossible one.

Rachel was diagnosed with polycystic ovary syndrome not long after meeting Stephen, who had himself undergone an operation that affected his fertility after twisting his testicle when he was 18 years old.

Sadly, Stephen’s sperm count was so low that IVF was not a possibility and with ICSI raising the chances of miscarriage, the couple were out of options. 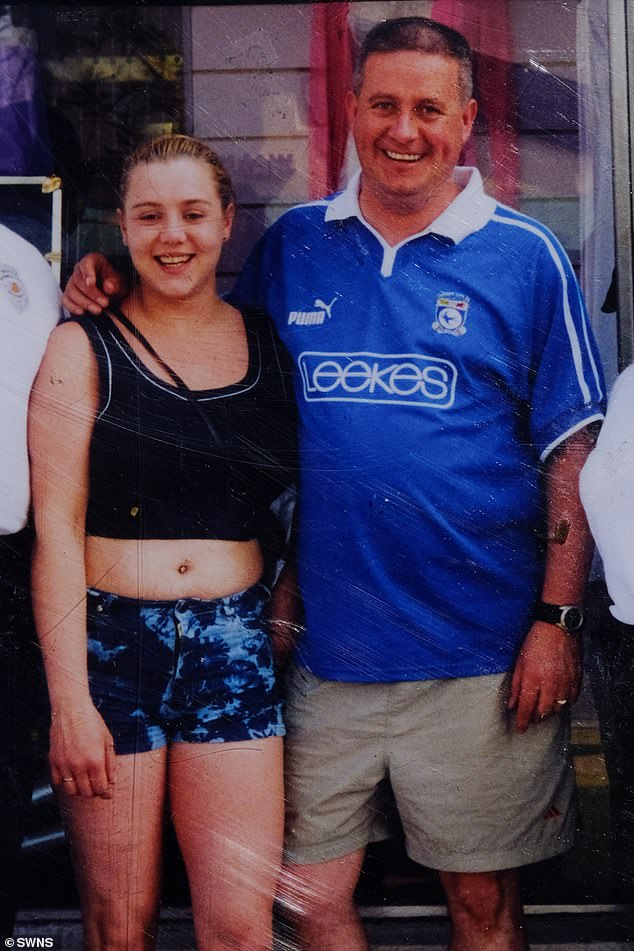 When retired policeman Stephen and senior careworker Rachel met back in 2000, both wanted to become parents but their individual health conditions made their dream of children appear to be an impossible one

Stephen said: ‘We were desperate to have children together but when we ran out of options, we just had to accept that we would never be parents.

‘It was devastating, but we came to terms with it and still enjoyed our lives together with it being just the two of us.

‘We’ve never taken any fertility pills so this was completely unplanned.

‘We’ve never used contraception, ever since we were teenagers, as we believed we’d never have kids and then this miracle happened!’

Rachel said: ‘When we first got together, having kids was a really big thing for us. I was only 19 and it was a big thing for me.

‘But then when you get told that you can’t or potentially won’t be able to have kids, you just have to go and do other things and take it into your life that you’re not meant to be a mum.’ 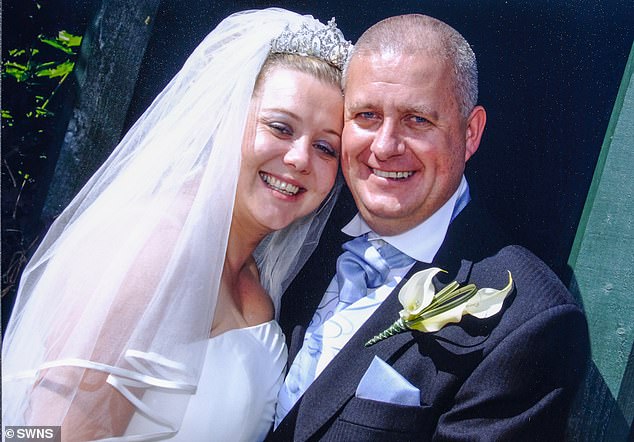 Rachel, 41, has polycystic ovary syndrome whilst Stephen, 55, suffered a twisted testicle as a teenager that left him with an extremely low sperm count

In February 2021, Rachel was admitted to hospital with kidney stones – a problem that she encounters regularly due to her kidney disease.

After her stomach began to swell and her nipples grew sore, Rachel was sent to a specialist who referred her for a scan in a couple of weeks time.

But when Rachel’s stomach grew increasingly painful and her skin turned yellow, Stephen decided they couldn’t wait for the scan and drove her to A&E.

With Rachel admitted into hospital and undergoing blood and urine tests ahead of her kidney scan, Stephen headed to a nearby retail park to wait for his wife as he couldn’t wait in the hospital due to Covid.

Sat with a coffee in the car park of McDonalds at Meole Brace Retail Park, he had no idea that one phone call was about to change his life forever. 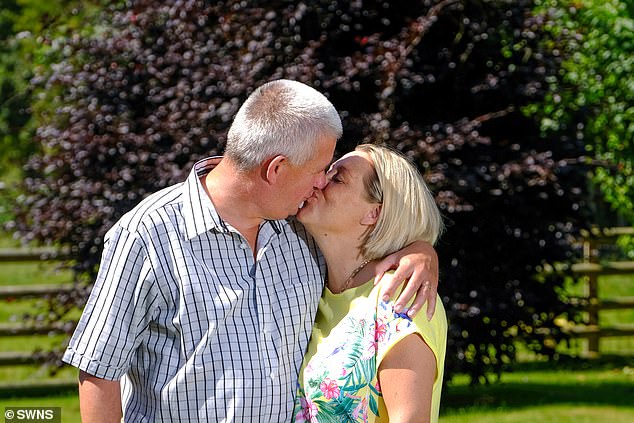 ‘I said “you can’t be”, obviously. She said “I know, I told them that there must be a mistake with the test”. Whilst I was on the phone to her, I could hear my wife saying “Oh ok, ok” to a doctor, and I asked what was the matter.

‘She said, “I’m being blue lighted to Telford Hospital, something is wrong”. I was obviously all stressed out and then she rang me from the back of the ambulance to say that the paramedic had read the doctors notes and it looked like she was having an ectopic pregnancy.

‘I went home, distraught, crying, waiting to console my wife when she got home.

‘They took her straight up onto the ward in Telford where they do the ectopic scans and miscarriages.

‘The nurse said, “Oh my god, you’ve got a beautiful bouncy, very active, very large 21 week old baby boy, and he’s due on July 16”. I went from my knees to ecstatic, as you can imagine! It was a miracle.’

Rachel said: ‘I’ve never had active steady periods so I would most certainly never have known that I was pregnant, I just thought it was a kidney stone causing the pain.

‘I thought I wasn’t meant to have babies after what the doctors said, so I tried to get on with life without having kids, but it looks like good things come to those who wait! 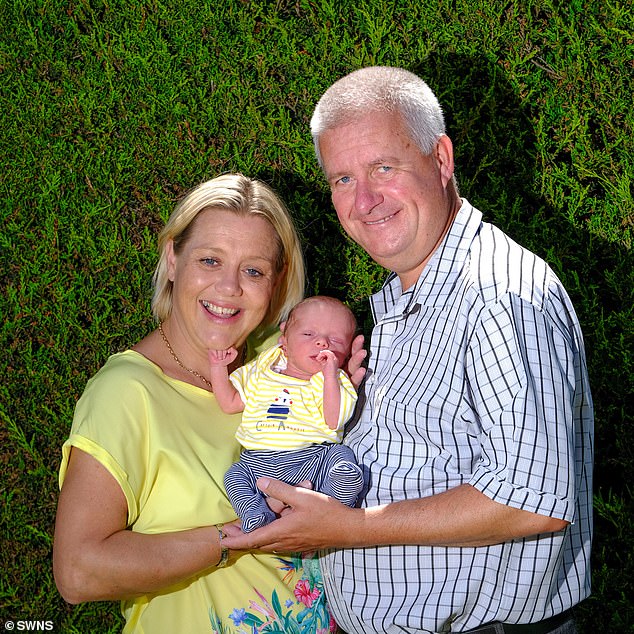 Rachel said: ‘It still hasn’t quite sunk in some days. I’m still in awe just looking at this baby, thinking oh my good might, he’s mine’

‘We weren’t trying so it came as a shock – a happy shock, but a shock!’

After 21 years of waiting for a baby, the shocked couple couldn’t believe that they had finally fallen pregnant but were thrilled at the surprising news.

The only change in their lifestyles had been that Stephen had given up eating any products containing yeast back in September 2020.

This decision came after a six year battle with diabetes had left Stephen subject to frequent yeast infections.

During a visit to his osteopath regarding back pain, the pair got to talking about Stephen’s yeast infections and he was advised to try ditching bread to combat them.

Thrush and other yeast infections are more common in people with diabetes as high sugar levels lead to better conditions for the yeast to grow.

Penile yeast infections can affect male fertility, leaving sperm weak, fragmented and reduced in viability during intercourse which could lower the chance of getting pregnant. 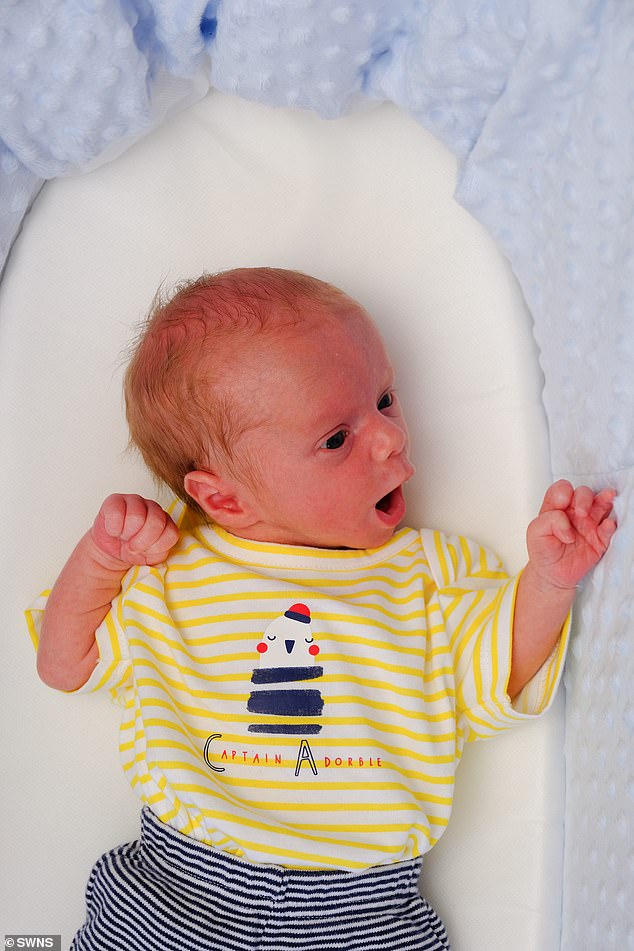 After 21 years of waiting for a baby, the shocked couple couldn’t believe that they had finally fallen pregnant but were thrilled at the surprising news. Baby Oliver arrived safe and sound on July 1 via a planned C-section

After Stephen ditched yeast completely, he was amazed to see his yeast infections disappear entirely and there’s a high chance his lifestyle change is what lead to Rachel falling pregnant after all these years.

Stephen said: ‘I’m diabetic and suffer from a lot of thrush and balanitis. I’ve lived with it for years, so things in the bedroom department don’t happen very often.

‘I told my osteopath about it and he recommended a book about yeast infections and how our bodies can overload on yeast quite easily.

‘I am quite careful about what I eat anyway but I read the book and I started to think about how I do get thrush and I do eat toast in the morning and a sandwich at lunch time and have the odd pastry.

‘I stopped eating anything with yeast in it last September, just cut it right out, and within two weeks, my infections had ceased and I’ve never had one back, and five months later, my wife is pregnant.’

After feeling nervous throughout their pregnancy with fears of losing their miracle, Stephen and Rachel finally welcomed their son last month.

Baby Oliver arrived safe and sound on July 1 via a planned C-section weighing 5lb 5oz and his excited parents are settling into their new life as a family. 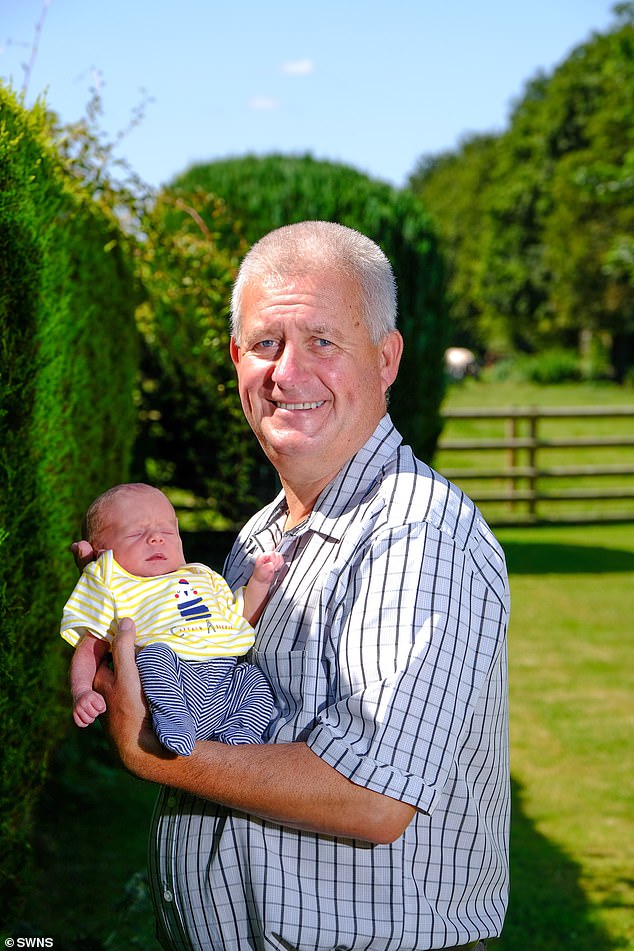 After feeling nervous throughout their pregnancy with fears of losing their miracle, Stephen and Rachel finally welcomed their son last month 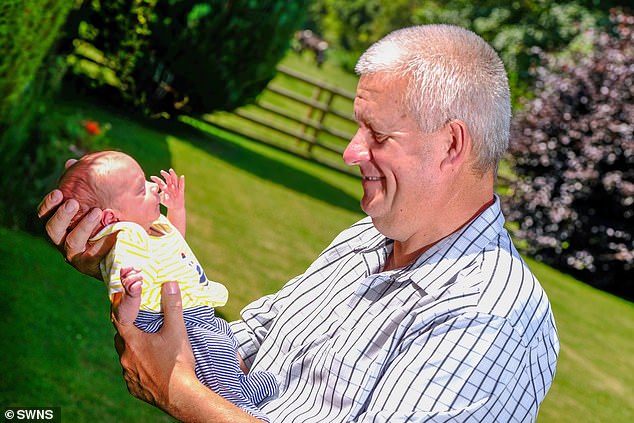 Stephen said: ‘It’s such a wonderful miracle that we want to share it to give other people hope’

Rachel said: ‘It still hasn’t quite sunk in some days. I’m still in awe just looking at this baby, thinking oh my good might, he’s mine. I don’t have to give him back because I’m holding him for someone, he’s here to stay!

‘He’s absolutely amazing, and Steve has been amazing too. I am loving being a mum. It was quite emotional to start off with – nobody expected us to be having him and he’s just been so well looked after by our friends sending us gifts for him.

‘It has been overwhelming! It is weird to talk about, it just all sounds so unusually strange with how it all came about. We just say he is our little miracle baby.

‘We weren’t expecting him at our time of life, but he’s here and we couldn’t be happier!’

Stephen said: ‘It’s such a wonderful miracle that we want to share it to give other people hope.

‘My osteopath rang me when he found out through a friend of mine that Rachel was pregnant. He’s 70, I’m 55, and we were both crying down the phone at each other!

‘It’s such a wonderful thing, I want to get it out there and tell people not to give up hope. You just never know, everybody is different, our bodies change.

‘It’s an incredible situation with Rachel because of her polycystic ovaries and coming to 40 years old with menopause around the corner.

‘When you put all of the factors together, it’s really amazing. I’ve got my health problems, she’s got hers, and I’ve also got an 84-year-old mother with frontal lobe dementia who has lived with us for the past 14 years.

‘With that, and the health problems, the opportunity doesn’t arise very often so it’s actually billions to one – not millions, but billions!

‘I just want to share our news and make other people half as happy as I am!’