A couple accused of drugging and locking up elderly foreigners in a ‘House of Horrors’ so they could steal their savings have been arrested in Spain.

The pair, said to be of German-Cuban origin, were caught after 101-year-old German woman Maria Babes died suddenly after being left in the couple’s care.

Police then discovered that another four people had died while the couple had supposedly been looking after them, including one person suspected to be British.

The couple were caught after Maria Babes, 101, went missing from her home in Tenerife and police found her in their care. While in their care, police say her life savings disappeared from her bank account before she suddenly died

All of the elderly people had seen their savings dwindle while being ‘cared for’, and officers believe the couple may have conned more than £1.5million out of them.

Officers did manage to save two OAPs, one Dutch and one German, who had been held prisoner for months in a second villa near the main house while they were drugged and fed with drips.

Another four people have been arrested and nine placed under investigation, accused of playing a part in the scheme.

Investigators believe the perpetrators planned to launder the money into a tourist complex in Novo Santi Petri, where they were caught.

The scheme was uncovered after German investigators asked their Spanish counterparts for help in tracking down Mrs Babes, who had gone missing.

Their search led Spanish police to a retirement home in Chiclana de la Frontera near Cadiz where they interviewed Mrs Babes.

A Civil Guard spokesman said: ‘During interviews with her, she told officers she had been locked up for several months in a rented villa and during that time had been shackled.

‘During that time, and to the surprise of investigators, she supposedly gave her ‘carers’ power of attorney and then named them as her heirs.

‘The German woman denied agreeing to this, and it happened while she was seriously ill in hospital.

‘After the appearance of this couple in her life in October, her bank balance went from £140,000 to just £260 by December.

‘Her house in Tenerife was also sold during that time and she never received a penny.’ 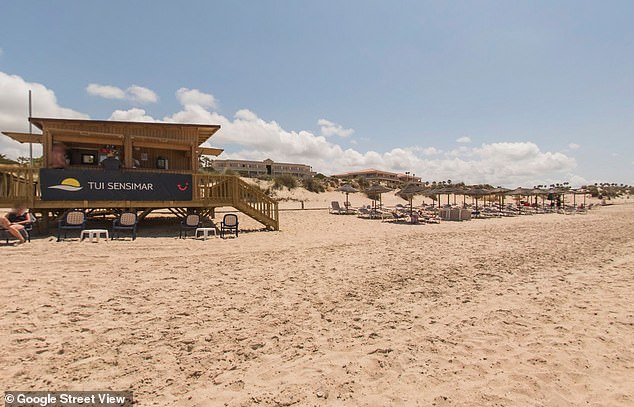 Officers say the couple ran a ‘House of Horrors’ care home in Novo Santi Petri (pictured), in southern Spain, where OAPs were kept shackled to bed and at least five people died

Officers immediately removed Mrs Babes from her carers and took her to a retirement home.

But before they could arrest the couple, they arrived and took Mrs Babes away, and she died just five hours later.

The couple also managed to have her body cremated before officers caught up with them, without carrying out an autopsy.

That means it will now be impossible to establish a cause of death.

A spokesman for the Civil Guard in Cadiz confirmed: ‘Six people have been arrested and nine placed under investigation as the suspected authors of a series of crimes ranging from fraud to forgery, misappropriation and money laundering.

‘The operation led to officers tracking down an elderly German woman and removing her from the control of her ‘carers’, who had stripped her of her assets.

‘Tragically, after removing her from the control of this couple, they managed to get her out of the retirement home she had been placed in and five hours later she died suddenly.

‘The Civil Guard operation led to the rescue of another two elderly people the detainees were ‘looking after’ and who were being kept prisoner, drugged, and fed using drips.

‘The investigation has revealed another four people who were supposedly being looked after by this couple, had died suddenly after they got their hands on their assets.

‘In four years this couple had managed to accumulate assets worth more than £1.54million.’

Police added that Maria was taken from her retirement home at 11am on Thursday, after being caught on CCTV playing a tambourine and in good health.

Her death was recorded at 4pm with no witnesses present and she was cremated shortly afterwards.

A funeral parlour manager later today officers that the ‘carers’ had rushed to have the remains cremated and said they didn’t want an urn for them, despite expressing their utmost affection for the dead.

‘During the arrest of the couple and in a search of the villa, police found two airplane tickets to Cuba with a reservation for the Hotel Melia Veradero, which would have made it difficult for them to look after Maria if she had still been alive,’ police said.