From the outside, Sabrina Kouider seemed to have it all. Attractive, vivacious and with a job in the fashion industry, the 35-year-old mother-of-two appeared a perfect fit for the affluent corner of south-west London where she had chosen to make her home.

Indeed, the setting could hardly have been more appealing – well-heeled neighbours in multi-million-pound terraced houses and an ‘outstanding’ primary school for her children. There was even a Marks & Spencer Foodhall at the end of her road.

And it was there, against the backdrop of this wealthy middle-class suburban enclave, that the life of a young, innocent French woman would end in circumstances that are almost too appalling to comprehend.

And what makes the death of Sophie Lionnet all the more shocking is that it was not the result of a single moment of madness.

A shocking image shows nanny Sophie Lionnet after she was starved and tortured by the couple she worked for. She was murdered two days after this picture was taken 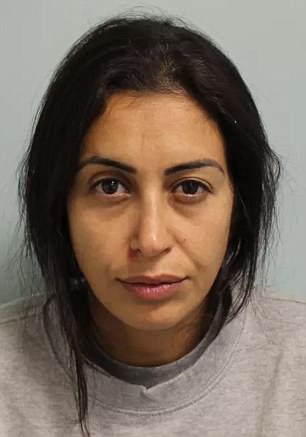 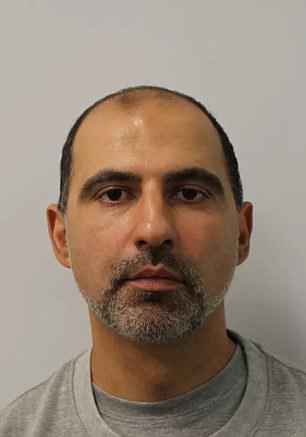 Sabrina Kouider, 35, and Ouissem Medouni, 40, were today convicted of her murder

Her abuse unfolded and intensified over the course of months. And while no one knew the full extent of what was going on behind the doors of Kouider’s rented £550,000 ground-floor flat, there were plenty who had their concerns.

A naturally thin girl, over time the young nanny became positively emaciated and unkempt – her hair lank and greasy, a vacant, sad look on her face. A local restaurateur noticed how hungry she was – wolfing down chips that he gave her whenever she called in.

Others who saw her interact with Kouider were shocked by the way she treated her – shouting at her, calling her names, striking her. Even the police were involved at one point, as were Sophie’s parents.

But despite these warning signs, no-one, not least Sophie herself, did anything about it. Why that is, will no doubt haunt those involved for years to come.

And yet the reality is that the circumstances were unique – so bizarre they were almost impossible to believe. 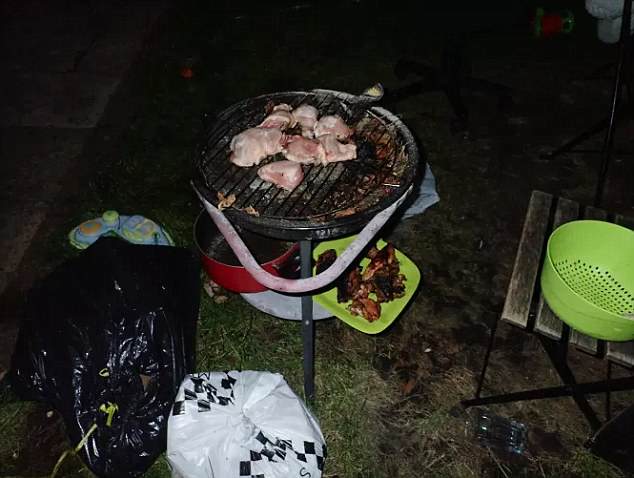 In Sophie, by chance, the outwardly respectable Kouider had found the perfect person on whom to vent her paranoid delusions.

Naive, innocent and a long way from her home, the 21-year-old’s kind heart and love for the children she was looking after was abused and exploited.

While deep down Sophie knew she needed to get out, to go back to her mother, whenever she threatened to leave, Kouider would persuade her to stay, promising things would change.

Later on, as Kouider became increasing irrational and obsessive, the violence began. By the end, Sophie was totally broken – tortured, imprisoned and brutalised to such an extent she was incapable of rational thought.

‘How can someone work for no money? How can someone be treated in such an appalling manner and not leave?’ the jury was asked by the prosecution at the start of the trial.

‘Your reaction will be based on the fact that it is likely that never before will you have encountered a combination of individuals such as these two: Sabrina Kouider and Sophie Lionnet.

The one being vindictive, overbearing and controlling – the other being timid, uncomplaining and especially vulnerable to manipulation and threats.’

Sophie’s killer, who at birth was named Nafissa by her parents, was born in northern Algeria, one of four siblings. 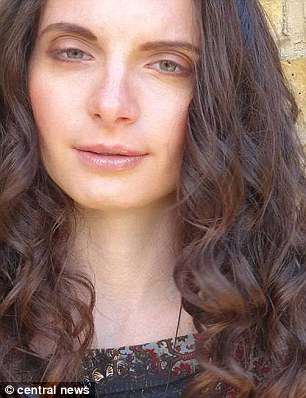 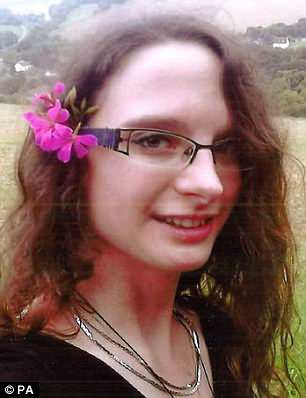 Sophie Lionnet was a shy au pair who became trapped in her killers’ violent, paranoid world

Not long after her birth her parents and sister left for Paris because of the conflict in the region. She was cared for by her grandmother, joining her family in France when she was eight.

Raised in Vitry, a southern suburb of Paris full of industry and housing estates, she found settling in to her new life ‘difficult’.

Hers was a gritty rather than glamorous beginning. At the age of 18 Kouider left school.

Three years later she met Ouissem Medouni at a fun fair. Bowled over by her beauty, he said he felt like he had won the lottery when she agreed to date him. Kouider was the dominant partner from the start – Medouni her ‘lapdog’. Over the following years the pair’s on-off relationship would never be short of incident.

Medouni told how Kouider threatened his father with a knife, overdosed on tablets, jumped out of a window and was admitted to a psychiatric hospital suffering from bipolar disorder.

In about 2005 Kouider travelled to London to improve her English and find work.

Not long after Medouni joined her, having landed a job with the French bank Société Générale.

Medouni suspected her of cheating on him with forklift driver Anthony FrancoisFrancois and they split.

A couple of years later Kouider gave birth to her first child. Mr Francois was his father, although they were not together.

Following her arrival in London, Kouider had taken the first name Sabrina. ‘It was all part of an attempt to reinvent herself as someone who was ‘hip’, and not just another girl from the projects [housing estates],’ said a friend. 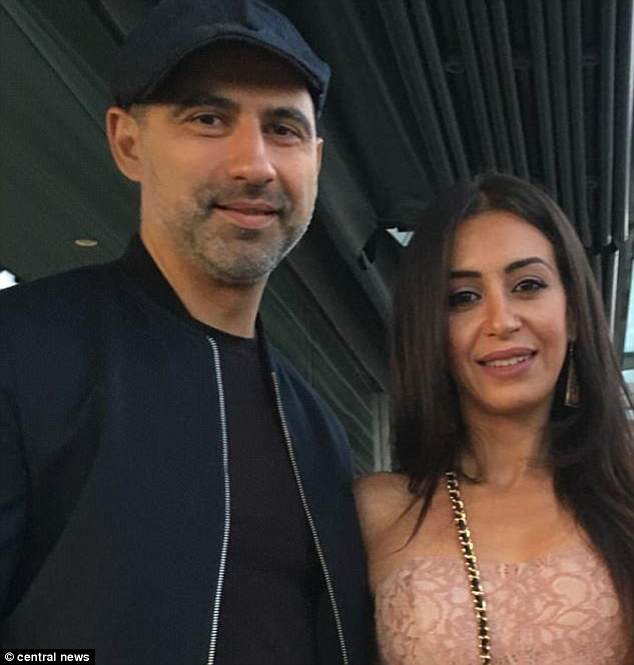 And, indeed, from a glance at her Facebook pages you would be forgiven for thinking that here was a woman with the world at her feet.

She was perfectly made-up, and her petite figure was shown off in a range of designer clothes.

There were pictures of her at glitzy London launches and drinks parties. She looked, said a friend, as glamorous as one of the Kardashian sisters. She claimed variously to be a fashion designer, a make-up artist and a music producer.

WHAT makes Kouider’s story all the more extraordinary is that she had actually found a way into that world – only for her self-destructive tendencies to wreck it all.

In 2011 she met music mogul Mark Walton. He had founded Irish pop group Boyzone while at school with Shane Lynch.

Not long after he was edged out of the band but went on to become involved with Irish girl group B*witched, and to become a judge in Vietnam’s Pop Idol. He was good looking, available and wealthy.

The pair’s paths crossed in the unlikely setting of a NatWest bank in Notting Hill. The chemistry was instant. Here was another man bewitched by Kouider’s beauty.

They would live together for two years, then Kouider disappeared without warning. It later transpired that she had given birth to her second child while in America.

Despite their split, when Kouider returned to the country in mid-2013 the ’emotionally broken’ Mr Walton paid £12,800 in advance rent for the flat in where Sophie would ultimately be murdered.

He only stopped the financial support in February 2014 when the scales finally fell from his eyes.

Kouider did not take it at all well. She subsequently phoned his mother accusing him of being a paedophile and repeated the claims on a Facebook page.

Mr Walton was questioned by police over the entirely baseless allegations in 2015, which he denied in their entirety.

Living in Los Angeles, Mr Walton last visited the UK in October 2015 and never met or had even heard of Sophie until told of her murder.

And yet it would be Kouider’s obsessive and illogical belief that Sophie and Mr Walton were in league together that would drive her and her partner to murder.

Her anger and bitterness grew as her gilded lifestyle began to tarnish and fall apart. Money was short, her first love Medouni was back on the scene and contributing little, and the pair struggled to pay the rent.

When Sophie joined the family in January 2016 she was to be paid £50 a week. She rarely received even that. As the months passed her treatment deteriorated.

First Kouider accused Sophie of stealing a diamond pendant. Then she claimed that she and Mr Walton were in some way conspiring together, that she was his ‘spy’ inside the house.

Their plan? To sexually abuse and to harm the family. In a rage she beat Sophie with an electrical flex. ‘I started hitting her really bad,’ Kouider told the court. ‘I felt betrayed.’

Last August Medouni – ‘beguiled’ by Kouider – joined in the interrogations. Sophie became a prisoner in the flat, forced to sleep on a desk, forced into making confessions that were never good enough to placate her abusers.

Instead the pair increased the pressure on her, using their mobile phones to make videos and audio recordings of 19 increasingly ‘brutal and oppressive’ interrogations of their ‘terrified’ victim.

In the final video, shot a few hours before her death, Sophie was pale and withdrawn as she apparently parroted lines about drugging the family’s drinks at Mr Walton’s command.

In the days before she died, Sophie suffered fractures to her sternum, to four of her ribs, and to her jawbone.

She also had bruising to her left arm, back and chest. The night before her death she was tortured in the bath.

In her evidence Kouider claimed that Medouni had waterboarded the young nanny – covering her face with a towel and then pouring water over it.

Exactly how Sophie died is unclear – her remains were too badly burned to establish a cause of death. But it is possible that she drowned in the bath having been punched in the face.

Neither Kouider nor Medouni would admit to being responsible, each claiming they were asleep when Sophie died.

They then hid the body in a suitcase. In a final act of depravity the pair had sex. Sophie’s body lay on a bed nearby.

Afterwards, they tried to get away with murder by burning her body on a bonfire in the garden of their flat.

When firemen were alerted by neighbours to pungent-smelling smoke last September, they arrived to discover Medouni cooking food on a barbecue in an attempt to disguise the smell of herbody burning to make it unrecognisable. Medouni claimed he was ‘cooking a sheep’ but firemen suspected it was human remains.

Before burning the body, Kouider had taken a shower. ‘It’s for cleaning – to clean my sin,’ she would tell her boyfriend, like some modern-day Lady Macbeth trying to wash the ‘blood’ from her hands.

Of course, unlike the Shakespearean play, this was a tragedy with a very real victim.

The mother of a French nanny whose emaciated, beaten body was found burning in a garden denounced her killers as ‘monsters’ as they were convicted of murder yesterday.

Sophie Lionnet, 21, died last September after being starved and waterboarded by her boss, mother-of two Sabrina Kouider, 35, assisted by her ‘lapdog’ boyfriend Ouissem Medouni, 40. They then tried to burn the body in the garden at their flat in Southfields, south-west London.

Kouider and Medouni, a former banker, were both convicted of murder by an Old Bailey jury. They were remanded in custody and will be sentenced on June 26.

In a victim impact statement, the au pair’s mother Catherine Devallonne, 48, from Troyes, northern France, said: ‘Those monsters repeatedly beat Sophie, starved, tortured and broke her until she could no longer fight.’ 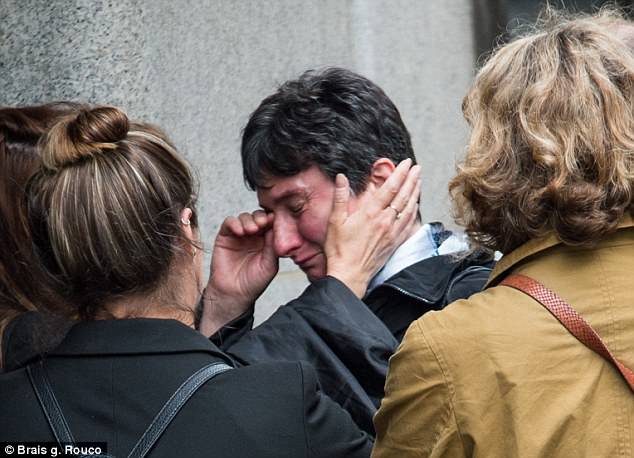