A police officer ‘harassed’ a husband and wife after they complained when they saw him eating Lidl crisps they accused him of stealing from their kitchen during a search.

Richard and Michelle Hall, both 45, from St Helens have sued Merseyside Police because PC Paul Allen sat outside their home in a marked van.

The force was sued for breaching their human rights after the officer parked near their address for 13 minutes despite having no official reason to be there.

‘This was a sinister act of intimidation by a police officer who behaved like a neighbourhood bully, not a neighbourhood cop, showing no respect either for my clients or his own profession,’ he said.

Trouble started when PC Allen searched their home in response to an allegation of burglary made against Mr Hall which was later dropped.

As the officer searched their son’s bedroom, the Hall’s CCTV cameras recorded him munching on chicken-flavoured crisps.

Initially they believed he had stolen them from their kitchen and reported him to the force, which put the officer on restricted duties while an internal investigation was underway.

But the investigators found that the crisps belonged to PC Allen, who was re-instated to normal duties in February 11 2016.

The next day Mrs Hall spotted him outside her home in the van and reported him to Merseyside Police for a second time. The force found he had committed ‘oppressive conduct/harassment’. 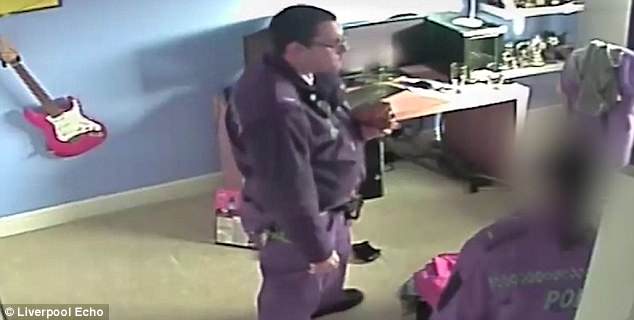 PC Paul Allen was caught munching on Lidl crisps during a search of the home in St Helens, Merseyside

He later claimed to have stopped to catch up on paperwork with a colleague and said his proximity to the Halls was coincidental.

But the police force’s Professional Standards Department found ‘the only logical explanation’ was that he was there ‘either to cause annoyance’ in response to the complaint or because he was angry about the allegation of theft.

The Halls decided to take things further when they heard that punishment would come in the form of ‘management action’ against the officer.

Mrs Hall said in a witness statement that she felt ‘vulnerable’ during the incident and rang her husband ‘crying and upset’. 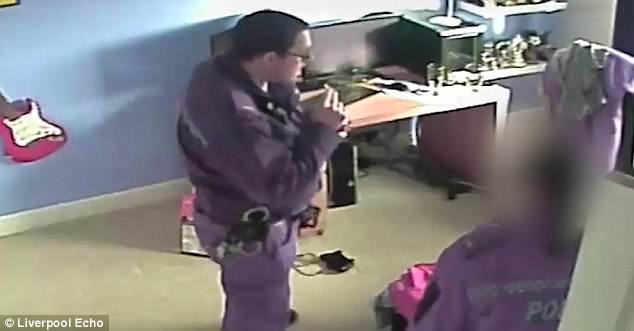 High Court Judge Lynda Sykes said there was no ‘legitimate policing reason’ for the officer to have parked outside their house.

Merseyside Police said disciplinary action has been taken against PC Allen and the process is now complete.

Detective Superintendent Dave McCaughrean said the force is considering pursuing an appeal against the finding that PC Allen breached Article 8 of the European Convention on Human Rights.